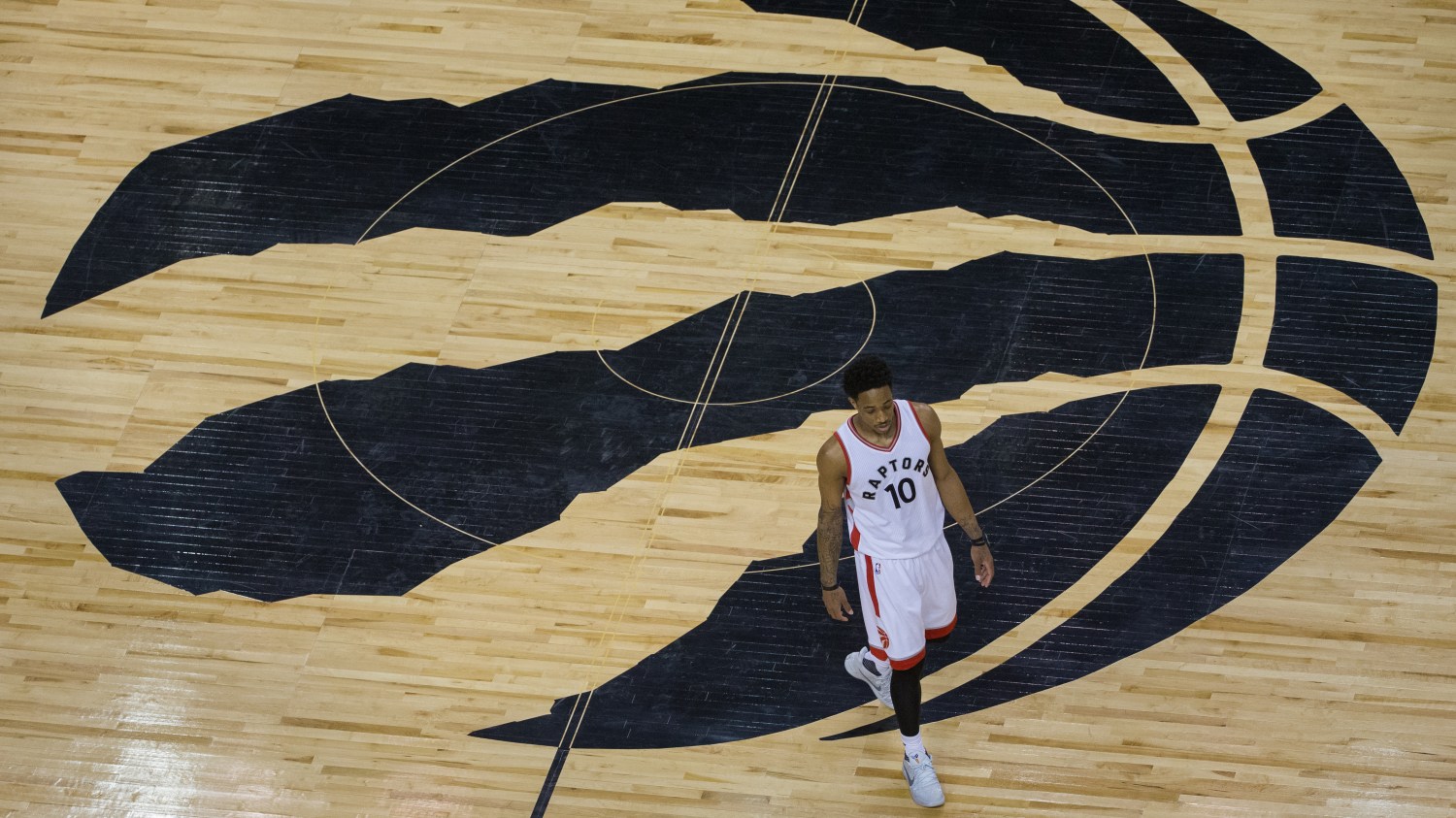 Toronto Raptors guard DeMar DeRozan (10) walks across the team logo at centre court as time runs out. Toronto Raptors vs Cleveland Cavaliers in 2nd round action of NBA playoffs at Air Canada Centre. Raptors are swept 4-0 in games with a loss today 109-102. Rick Madonik/Toronto Star via Getty Images
2017 NBA Playoffs

Raptors’ DeMar DeRozan has the utmost respect for LeBron James, though The King showed no mercy

In a four-game Eastern Conference semifinals sweep, James and the Cavs destroyed Toronto

DeMar DeRozan has all the answers when it comes to LeBron James.

Not in the figurative sense of the word, though. We’re not talking about possessing a formula to defend or, to be honest, even limit James on the court, as The King absolutely demolished DeRozan and the Toronto Raptors in a four-game Eastern Conference semifinals sweep to the tune of 36 points (on 57 percent shooting from the floor and 48 percent from deep), 8.3 rebounds and 5.3 assists a game.

After the worst playoff outing of his career — five points on 2-of-11 shooting, and just one point through three quarters — in a 125-103 Game 2 loss to the Cavs last week, DeRozan was asked how he and his team could stop the prolifically dominant James going forward. His response was simple — he had no clue, and was basically on the verge of putting out an ad on Craigslist for help.

“If you can find somebody to stop LeBron in these moments,” DeRozan told reporters, “I’ll give you $100.”

As good as that answer was, it got even better.

After the Cavs knocked the Raptors out of the playoffs on Sunday for the second consecutive year, the topic of time was brought up in the postgame news conference. Did DeRozan think things would have shaped up differently against James & Company if his team had more time to prepare? His response was, again, simple: If you can’t beat ’em, join ’em. Partake in praising of King James, just like we all have the whole postseason.

“If we had LeBron on our team, too, we woulda won,” DeRozan said. “We could say that all day, time, everything, but we didn’t. It happened. We got swept. It’s gonna be one of them long summers for us.”

As sad as his blunt response was, you’ve got to commend DeRozan for the respect he showed for James all series long.

Even after James thought about sipping a beer during Game 1 …

Or after he played the hell out of Serge Ibaka:

THE DISRESPECT! Lebron James spins the ball a couple of times and then drills a 3 in Ibaka's face! #DefendtheLand pic.twitter.com/6GNrOB9eSp

How about when Toronto musical artist and Raptors superfan Drake even caught some of The King’s pettiness:

LeBron, as he headed to the Cavs locker room postgame and spotted Drake: "Where are we headed tonight? Margaritas on me" pic.twitter.com/Nt62rNjMGs