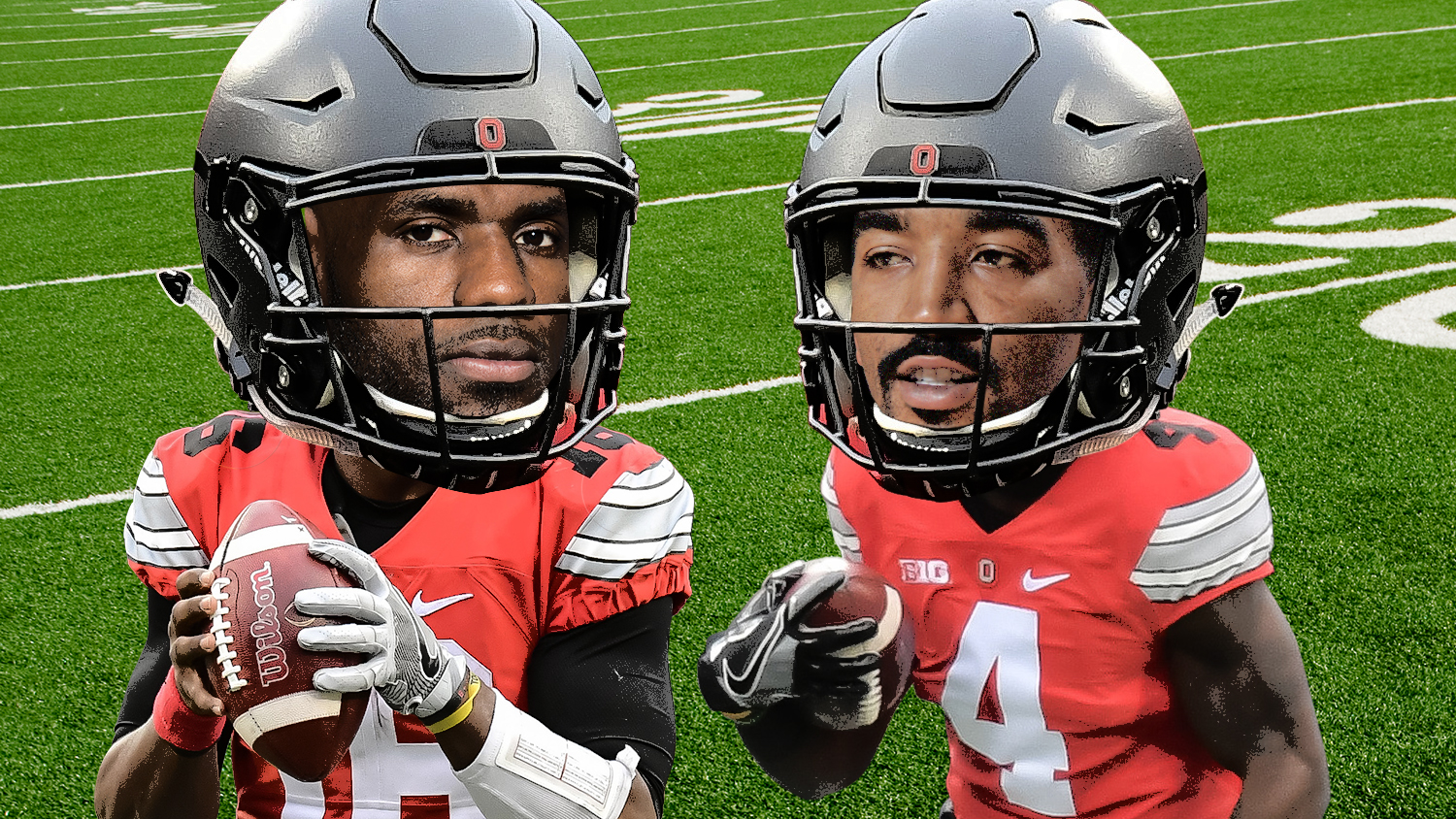 It’s a crazy idea. Ridiculous even. But, really: what if?

It was a late-fall off day a month into the NBA season, and Cleveland Cavaliers LeBron James and J.R. Smith looked as good in scarlet and gray as they do in wine and gold. In street clothes, accented with a one-of-a-kind No. 23 Ohio State Buckeyes jersey beneath a black team varsity jacket, James made a pregame appearance with several Cavs teammates on the Ohio Stadium field. But out of all of the Cavs, he and Smith stood out, as if they were both planning on eventually slipping on pads and cleats for the Nov. 26 rivalry matchup between No. 2 Ohio State and No. 3 Michigan. James tossed the pigskin while Smith, with his Buckeyes snapback slung backward, ran routes and hauled in passes. Expected to give the Buckeyes a pregame speech, James wasn’t interested. He, like Smith, is a football player — not a coach — at heart.

Instead, on one of the biggest Saturdays of the college football season, it seemed James and Smith were envisioning what could’ve been. And perhaps, what still could be.

From their suite-level seats during the game, which Buckeyes head coach Urban Meyer invited the 2016 NBA champion Cavaliers to attend, Smith’s mind began to wander. Because long before becoming an NBA sharpshooter, he was a jack-of-all-trades high school football star at Lakewood High School in New Jersey. His superstar Cavs teammate, James, was a two-time all-state wide receiver at St. Vincent-St. Mary High School in Akron, Ohio.

Both players garnered interest from college football programs. Each chose basketball over football — and rightfully so — and decided to skip college and enter the NBA straight out of high school. James was of course selected first overall in the 2003 NBA draft, and Smith was taken with the 18th pick in 2004.

“The question is, being that we play professional basketball, didn’t go to college, can we come back and play college football?” Smith asked in a video he posted at UNINTERRUPTED while watching the Buckeyes with an announced 110,045 spectators — the largest crowd in The Horseshoe’s 96-year history. “Do we still have eligibility? Somebody, give us the answer.”

Technically, the answer is yes. An NBA player could be granted NCAA eligibility in every collegiate sport except basketball.

“The question is, being that we play professional basketball, didn’t go to college, can we come back and play college football?”

“Generally, speaking,” said an NCAA representative in an email, “if a player were to be drafted and compete as a member of an NBA team, then he would not be eligible to compete in basketball at the college level. However, he could participate in a different sport.”

The rule is officially outlined in the Amateur Status if Professional in Another Sport clause in section 12.1.3 of the NCAA’s Division I Manual, which states, “A professional athlete in one sport may represent a member institution in a different sport and may receive financial assistance in the second sport.”

That means, not only could Smith and James play college football, they could receive scholarships (not that they would need them). However, there’s little to no chance it will ever happen — at least not for a while, given that the college season coincides with the first half of the NBA calendar, and that both players have endorsement deals and agents, which could put their eligibility in jeopardy.

But what if Smith and James did decide to one day go to college? And in their free time, what if they played football?

There’s pretty notable precedent for an NBA player switching sports during the prime of his career. On Oct. 6, 1993, less than three months after his father’s murder, Michael Jordan announced his retirement, even though he’d led the Chicago Bulls to three straight NBA titles. Four months later, at the age of 31, Jordan signed a minor league contract with the Chicago White Sox, with the goal of making it professionally in the sport his father always wanted him to play.

Both Smith and James are 31. Imagine if they called a news conference and announced they were leaving the game of basketball, a season removed from overcoming a 3-1 deficit in the NBA Finals to win Cleveland’s first major sports title in 52 years, to pursue football careers — not professionally, but collegiately. What separates them from Jordan, who was drafted to the NBA out of the University of North Carolina in 1984, is they never got a college experience — and everyone deserves one.

The switch, if they were average NBA players, probably wouldn’t yield too many roadblocks. The problem is, they’re J.R. Smith and LeBron James. Players of their eminence, “likely received compensation above actual and necessary expenses for product endorsements, advertisements or promotions, which would render them ineligible in all sports,” according to the NCAA’s response. The parameters of the contracts with their respective agents could also raise some flags.

But we can still dream. And we can hope that if college football is in their plans, Smith and James find some high-profile lawyers to get them past the red tape (though that’s probably an NCAA violation in and of itself). In the meantime, let’s speculate, first in terms of what position the two would play in the college ranks. “Wide receiver always looking good,” Smith joked in his video.

Consider the top 10 receivers in college football this season. The biggest is Western Michigan’s 6-foot-3, 213-pounder Corey Davis, who caught 91 passes for 1,427 yards and a nation-leading 18 touchdowns in 13 games. Smith, a below-average-height NBA player, is 6-feet-6, 225 pounds, and James, arguably the greatest athlete on the planet, is 6-feet-9, 250 pounds — and both have 44-inch vertical leaps. Picture the possibilities against wide-eyed college defensive backs. Four words: Red zone fade routes.

“You could never put a little guy on him,” Baltimore Ravens defensive coordinator Dean Pees, former head coach of Kent State, said of James the high school football player in a 2009 ESPN story titled “LBJ and NFL: A fantasy based in reality.” “They’d just lob the ball, and nobody could defend him.”

In two seasons in pads (his sophomore and junior years) at St. Vincent-St. Mary, James emerged as one of the best prep receivers in the state with 99 receptions for 1,912 yards and 27 touchdowns. There was no question that James’ destiny was on the hardwood, but college football coaches remained curious. Powerhouse programs such as Alabama, Miami and Ohio State went after him, though he didn’t play football after his junior year. At some point, James caught the eye of Jim Tressel, Ohio State’s head coach 2001-2010, who had special plans for him if he had gone the football route.

The switch, if they were average NBA players, wouldn’t yield many roadblocks. The problem is, they’re J.R. Smith and LeBron James.

“He did have a short conversation with Coach Tressel over maybe playing tight end,” said Bill Conley, Ohio State football’s former recruiting coordinator, in an email. Conley, however, added that Ohio State never officially recruited James, and he never saw him play in high school. “We did not formally recruit him at all.” A month into James’ senior basketball season, the No. 2 Ohio State Buckeyes upset the No. 1 Miami Hurricanes to win the BCS National Championship. Crazy to think that he could’ve gone on to play for both teams.

Unlike James’ high school football days, which have been chronicled repeatedly over the years by the likes of ESPN, Bleacher Report and even The New York Times, Smith’s are a mere footnote, even though flag and Pop Warner football shaped him into a sought-after high school player before his jump shot and athleticism catapulted him to the NBA at the age of 18.

“Smith also prospered on Lakewood’s football team, where he played all over the field — wide receiver, linebacker, cornerback, safety, even quarterback — saved two games with field goal blocks, scored a deciding touchdown on a blocked kick, and routinely caught touchdown passes on soaring fade routes with one hand,” wrote Jonathan Abrams in a 2012 Grantland profile of the then-New York Knicks player. “Clemson offered Smith a football scholarship based solely on watching his game film.”

While Smith was in contract talks with the Cavaliers last summer, one of his Twitter followers tweeted at him, saying, “Play for the browns homie.” Smith’s response: “Seriously thinking about it! #WR or #FS?”

The recent trip to the Buckeyes game gave Smith something else to think about: Could he have really played wide receiver or free safety at the collegiate level? We know that he was closer to going to college than James, having signed a letter of intent to attend the University of North Carolina before opting to go pro instead — but he signed to play basketball, not football, leaving the game behind in his early years of high school.

Regardless, the love for the sport that took a backseat for both Smith and James is clearly still apparent. James seems to love the Buckeyes as much as he loves both the city of Cleveland and his home state of Ohio. He attended Ohio State’s College Football Playoff National Championship win in 2015, and found his way onto the field following the game to give congratulatory hugs and daps to Buckeyes quarterback Cardale Jones and running back Ezekiel Elliott. “He told me this is something for all of Cleveland to believe in and rally around,” Jones said afterward. Who knows? Seeing the Buckeyes win a national title might have just added to the fire lit under James to bring a title back to Cleveland.

Perhaps inviting James and the Cavaliers to the Michigan game — during which Buckeyes players wore a special-edition cleated version of James’ Zoom Soldier X shoes — was a tactic Meyer employed to attract current high school recruits to sign with the program. Or maybe Meyer is still recruiting James, like he did more than a decade ago while he was the wide receivers coach at Notre Dame.

Smith and James must have some college eligibility, right?

“I say, yeah!” James interjected in Smith’s video. “Because I’m tryna play a snap for the Ohio State Buckeyes. Straight up.”

Your move, NCAA. Your move.