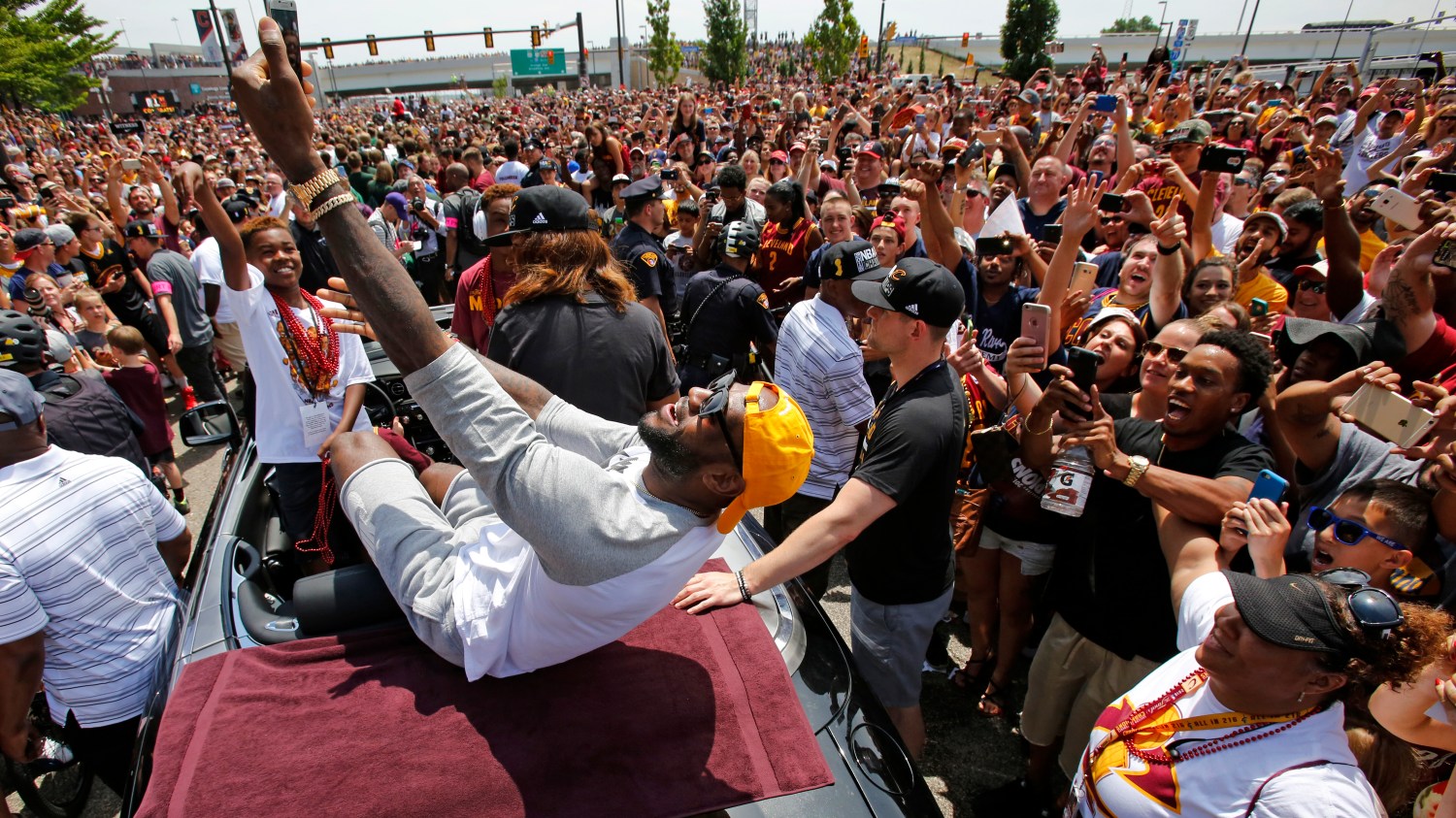 Cleveland Cavaliers’ LeBron James, left, takes a selfie as he sits in the back of a Rolls Royce as it makes its way through the crowd lining the parade route in downtown Cleveland, Wednesday, June 22, 2016, celebrating the basketball team’s NBA championship. AP Photo/Gene J. Puskar
NBA

The Carefree King of Cleveland

Even with nothing left to prove, there’s always something to prove when you’re LeBron James

For the first time in his 13-year NBA career, LeBron James enters October with very little to prove to anyone but himself. He remains the best player on the planet (and, at the absolute very least, one of the five best players ever). The last two Junes have proven as much. The pressure to repeat with another NBA title pales in comparison to the pressure of getting it done. And the 2016 NBA Finals afforded James an ocean of goodwill and a trump card no player in NBA history can replicate.

LeBron James became a one-man basketball ecosystem in the summer of 2001 following an epic showdown against fellow prep phenom Lenny Cooke, the top player in the country, at the ABCD Camp in Hasbrouck Heights, New Jersey. Only minutes after learning the Cleveland Cavaliers won the coveted 2003 NBA draft lottery on May 26, 2003, ESPN’s Andy Katz spoke with the young man, dubbed “The Chosen One” by Sports Illustrated a year earlier during his junior season at St. Vincent-St. Mary High School in Akron, Ohio, about being the future No. 1 pick for his home state team. About bringing the city of Cleveland its first professional sports title since the days of Hall of Fame Cleveland Browns running back Jim Brown in 1964. About living up to the seemingly unfathomable hype that surrounded him. About being compared to his idol, Michael Jordan.

James, 18 at the time, chuckled at the mention of pressure.

“Pressure,” he said, “been following me my whole life.”

And, of course, it stalked him throughout his first stint in Cleveland, the four-year, collegelike escape to South Beach, and back to Cleveland again. In between, debates raged about his ability to close out games. Raged about “The Decision.” About how his skill set and trophy case stacked up against Kobe Bryant’s, or Jordan’s, or Magic Johnson’s, or Oscar Robertson’s. Or, or, or. Pressure — unfair pressure — is the calling card of James’ presence during his era in basketball. Placing outrageous expectations — disguised as hurdles — at his feet has become an annual aphrodisiac.

2010: Cleveland’s the top squad in the Eastern Conference. He’s the reigning MVP. It’s his fault if we don’t get the Finals matchup with Bryant this year.

2011: Can he finally win one now that he had to escape to Miami?

2012: If he doesn’t win this year, when does his potential begin to remain just that — potential?

2014: But can he lead Miami to a three-peat? Ray Allen bailed him out last year anyway.

2015: Can he finally deliver a title to Cleveland?

2016: If he doesn’t win this year, with Kyrie Irving and Kevin Love healthy, what’s his excuse now?

The 2016 Finals spawned into social media’s go-to punchline this summer: the constant reminder that the Golden State Warriors blew a 3-1 lead. But the script of how it came to be was nothing short of the most dramatic television of the year. James stepped over Draymond Green in Game 4, prompting Green to take a swipe at James’ groin and allegedly call him a “b—-.” Klay Thompson poked fun at James immediately afterward, saying his feelings were hurt.

From there, James donned an Undertaker T-shirt, rose from proverbial basketball purgatory and all hell broke loose. James, Irving and the Cavaliers rallied from a 3-1 deficit against the best regular-season squad in league history with the only unanimous MVP. And did so by winning two games in Golden State’s Oracle Arena, the loudest venue in basketball and the final resting place for any team that entered its doors throughout the regular season and postseason. In the greatest three-game stretch in Finals history, James averaged 36.3 points, 11.6 rebounds, 9.6 assists, 3.0 steals and 3.0 blocks while shooting 50.6 percent from the floor. And again outplayed Stephen Curry, the two-time reigning MVP and James’ most provocative adversary in his career, on the game’s highest stage.

James led both teams in every statistical category, punctuated with a vengeful, history-altering block that instantly catapulted itself to the Mount Rushmore of his own personal highlight reel. He did what Katz asked about 13 summers earlier — James delivered Cleveland a title that eluded the city for decades. He did what Miami Heat president Pat Riley said he couldn’t do — win without him. Riley allegedly said, if you recall, that leaving South Beach would be the worst mistake of James’ career.

“That title against the Warriors,” Trey Kerby, host of NBA TV’s The Starters, said from his home in Atlanta, “is one of the all-time great titles. LeBron is such a student of the game and understands the history of it so much that I think it’s impossible, having come off that title, that he’s not going to just be loving it. LeBron is at his best when he’s filled with joy.”

James’ goodwill enters the 2016-17 campaign at an all-time high. He’s Jay Z following 2003’s The Black Album — a project that, at the time, was supposedly marking Jay Z’s “retirement.” He’s Janet Jackson after Rhythm Nation — the album that stamped Jackson as her own international tour de force and not merely “Michael’s talented little sister.” James is President Barack Obama in the final weeks of his second term — a leader dubbed as “a president liberated from previous constraint.”

Entering a season without the caveat of, If LeBron doesn’t do this … must be odd for the vet going into his 13th year. The world’s first superstar athlete of the 24/7 media cycle is the ruler in a league preparing for life without Bryant, Kevin Garnett and Tim Duncan. We are set to experience Carefree LeBron. The prospect of Carefree LeBron is exhilarating — and should be daunting for the rest of the league. “He’s going to be so free to do exactly what he wants, to manipulate the game the way he sees fit,” Kerby said. “[There’s] a huge weight off his back. He knows his place in history.”

There is some pressure. Not every moment, of course, will be carefree. The dawning of this new season does bring its set of challenges. An MVP season in 2016-17 would tie him with Jordan — one behind Kareem Abdul-Jabbar for the most in league history.

And the Eastern Conference is considerably improved. Paul George and the Indiana Pacers make no secret of their desire to dethrone the league’s reigning king. The New York Knicks, if nothing else, should be more entertaining than last season’s trainwreck. The Boston Celtics welcome All-Star center Al Horford and rookie forward Jaylen Brown, both of whom have Beantown faithful thinking big picture, too. And with close friend Dwyane Wade in nearby Chicago, who knows what this means for midseason getaways and Instagram workout sessions (and World Series bets!).

But, of course, the journey all boils down to the Golden State Warriors, who now have former MVP Kevin Durant. The Celtics and Los Angeles Lakers squared off four times in five years in the NBA Finals between 1962-1966, but never three consecutive. James admitted this summer that his career end goal is to become the greatest player of all time and eclipse Jordan. Surpassing ghosts means first dealing with demons you can touch in real life. James will never be able to better his hero’s triple-six championship medley: six titles in six appearances with six Finals MVPs. But the prospect of another title, against this Warriors team — the closest iteration the NBA has seen to the Monstars from Space Jam — puts a very real possibility in his GOAT (greatest of all time) quest.

“I don’t know if he’ll ever be able to overtake Jordan because, in people’s minds, Jordan has a spotless record. Six-for-six is a fact. It’s history,” Kerby said. “But it’s not out of the realm of possibility that we all look at the world and say Michael Jordan is the greatest player pre-social media. LeBron is the best player post-social media. Up through the year 2000, it’s Jordan. From the year 2000 on, I think it could be LeBron pretty easily.”

Regardless, a potential winner-take-all, Ali-Frazier-like trilogy pitting James, Irving, Love and J.R. Smith against Curry, Durant, Green and Thompson is nothing more than a pipe dream, right? There’s an entire season to navigate through beforehand. That means 82 games to poke, prod, annoy and entertain fans throughout the season. Eighty-two games to continue to march up the all-time standings in points, assists, steals, blocks, win shares, minutes played and player efficiency rating. A third and final trip to the White House to visit Obama — pending Smith wears a shirt. And even a couple of nights to add to the always entertaining theme of Beyoncé staring a hole through him while sitting courtside.

“It pretty strange, right? The first time we really ever heard about LeBron, he was in high school. Even back then, this was the guy that was gonna win Cleveland a championship. This is the guy that’s gonna change the NBA,” Kerby said. “To actually have it come true 13 years into his career — 15 years after we figured out who he was — that’s pretty amazing.”

With James, the argument can be made that no athlete — in any sport, ever — has had higher potential and expectations entering the workforce than him. And that’s the thing about potential, too. It’s a blessing until it isn’t anymore. But potential has to be cashed in before it begins to reek of unfulfilled promises. James cashed in on his. He’s met and surpassed every single reasonable expectation. There’s no telling what Carefree LeBron will resemble. At least we don’t have to wait any longer to find out.