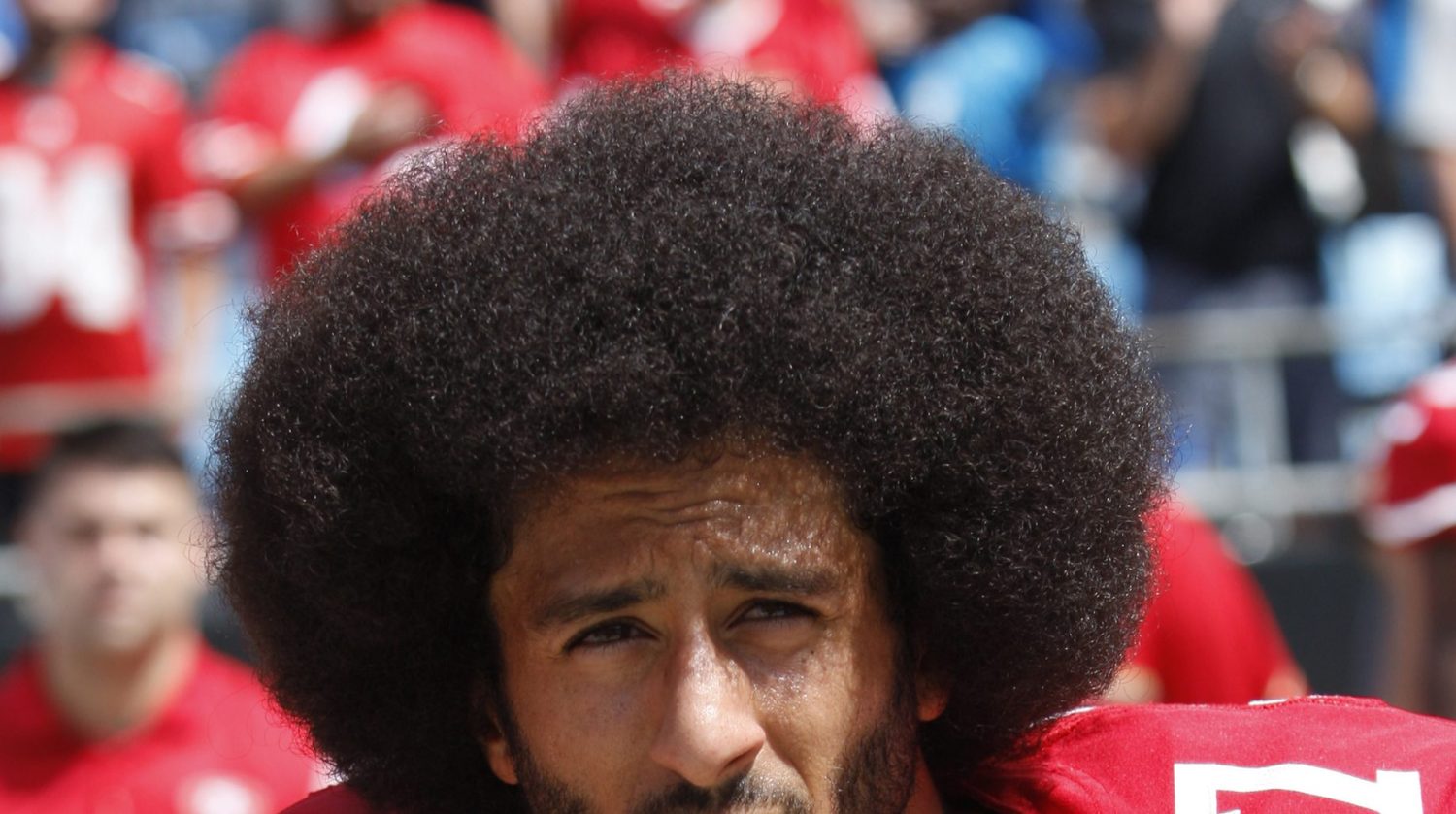 Colin Kaepernick #7 of the San Francisco 49ers kneels during the anthem prior to the game against the Carolina Panthers at Bank of America Stadium on September 18, 2016 in Charlotte, North Carolina. Michael Zagaris/San Francisco 49ers/Getty Images
Commentary

Colin Kaepernick’s hair is not our business. Michael Vick telling him to cut it is a problem.

When I was an intern at the Kalamazoo Gazette, one of the longtime reporters there pulled me aside to offer up a piece of advice: Cut your hair. More specifically, he said I wouldn’t get a job in journalism with “those things in your hair.” I could see the Jheri curl juice pooling in the pores of his forehead as he spoke.

I initially started growing my locs because of Speech from Arrested Development. As my hair grew along with my taste in music, I learned Bob Marley was a lot more political than the songs on his greatest hits compilation Legend would indicate. Still, I had not considered my locs to be a statement until I was told my hair was a problem by a black man who had relaxed his.

Of course, he was wrong.

But I can’t definitively say having locs didn’t cost me something along the way. Natural black hair makes some people uneasy. Long natural black hair can be downright frightening. Especially for the folks who unwittingly buy into the outlandish propaganda that deems Eurocentric features as the singular standard of beauty. The propaganda that helps fuel the millions spent on black hair care products such as relaxers and weaves and drives plastic surgery in Asia.

On an episode of The Talk, Sheryl Underwood jokingly said Afro hair was “nasty” before praising white hair as “beautiful.” It was like watching a skit from In Living Color minus the satire.

This is why it’s difficult to entirely dismiss Michael Vick’s assertion that Colin Kaepernick needed to cut his hair to find a job in the NFL. We all know his hair has nothing to do with his play, but it does play a part in how he is viewed.

Consider that earlier this week NPR published a fascinating, and disturbing, report on the rash of little black girls being suspended from school for wearing their hair naturally. In September 2016, the 11th U.S. Circuit Court of Appeals ruled that employers can ban natural hairstyles. The case started when Chastity Jones, a black woman in Alabama, was told by a white human resources rep that her locs were against company policy because they “tend to get messy.”

Even the iconic Viola Davis admitted that ditching her wigs and wearing her natural hair at the 2012 Oscars was an act of bravery.

That reporter at the Kalamazoo Gazette didn’t mean anything malicious when he told me to cut my hair. Based upon his worldview, I am sure he believed he was doing me a favor. Just as Vick didn’t mean anything malicious when he talked about Kap’s ’fro, he was just suggesting he play the game. Notice he didn’t suggest Riley “I will jump back in and fight every n—– here” Cooper needed to cut his long hair before welcoming him back into the Philadelphia Eagles locker room, as Cooper doesn’t need to play the game. Or at least not the one blacks have been told they needed to play since Juneteenth. The problem, of course, is that the game’s rules keep changing.

We can relax our hair, cut our Afros, smear on bleaching cream, turn our laughter down or pull our pants up in a pointless effort to be more “presentable,” as Vick said. But embracing respectability politics as some sort of cure-all for systemic racism doesn’t end this game.

It just takes it into overtime.