‘It is our first win, and hopefully there’s many more to follow. We’ve just gotta keep going.’

After the celebration in Talladega victory lane following Bubba Wallace’s landmark achievement last week, there was the after-party. Never mind that everybody on the 23XI Racing team had to be back at the shop in the morning. It was his first Cup Series victory and Wallace just wanted to surround himself with the people who had made his rainy day in the sun possible.

Once the 23XI team returned to the Charlotte, North Carolina, area, Wallace took advantage of the warm evening and welcomed his co-workers back to his place for a “quick and dirty” garage party. Just about everybody who rolled up was immediately doused in champagne. “I basically got drowned,” said Bootie Barker, crew chief for the No. 23 Toyota. “I tried to get away, but I couldn’t. It was a great time. People everywhere.”

“I mean, there are a lot of first-time winners on our team, and that makes it even more special,” Wallace said. “I would say 95% of our team got their first win — which is really, really cool.”

“Not everyone who works on the car, with COVID and limited rosters, got to be at the track,” explained 23XI competition director Mike Wheeler. “Having that celebratory moment was big.”

Since Wallace arrived on the Cup scene in 2017 as a talented and telegenic contender in the trucks and Xfinity Series, the pressure to win has been suffocating. For the past four seasons, he has faced that pressure while driving the No. 43 car of Richard Petty. The prospect of Wallace glorying in the victory lane with The King — who passed down used parts to Wendell Scott, NASCAR’s first Black owner-driver, to keep him on track — was an image fit for a Hollywood script.

For Wallace to ultimately become the first Black driver to win a Cup race since Scott’s 1963 triumph in Jacksonville, Florida, is one thing. It’s sweet poetic justice for him to do it at Talladega, the track that began as a works pet project of Alabama Gov. George Wallace, the virulent segregationist who vociferously campaigned against racial integration in American life. What’s more, this racism came rushing back at Bubba Wallace after he publicly agitated for a ban against displays of the stars and bars at NASCAR events.

As the only Black driver in the Cup Series and the third one to drive in NASCAR’s top-three nationally touring series, everything Wallace does is historic. But he doesn’t really think about it like that and is generally loath to cast his racing career in racial terms, so adamant is he about being considered just another driver at the end of the day. “I’m selfish,” he said after the race. Until Oct. 4, it had been four years since his last victory, which took place at a one-off truck series event in Michigan, as he was moving up to the Cup level. “Finally, I’m a winner again. I’m a winner at the Cup level. Hell, yeah, that’s what I’m saying.” What’s more, he won while driving for a team co-owned by basketball legend Michael Jordan and, well, that’s mind-blowing.

For perspective: It took 143 starts for Wallace to grab his first checkered flag in Cup and 484 races for Barker to snap his personal Cup drought. And Jordan? He gets his first victory after just 31 starts. Even better, he grabbed a playoff win from the eight drivers remaining in title contention. For a man accustomed to playing the role of spoiler, surely this too had to be as savory as the history made by him and Wallace, who keep Scott’s Black owner-driver heritage intact. “It was really special to be able to talk to [Jordan] when I landed, after getting his first win,” said Wallace, who was still cutting loose at a kickball tournament a few days after his big win. “He was superpumped. Superexcited.”

Granted, there’s a longer track record for Black owners than drivers in stock car racing, but their road isn’t any easier. In his 2010 memoir Racing While Black: How an African-American Stock Car Team Made Its Mark on NASCAR, Leonard T. Miller — who was part of a family-run racing business spearheaded by his father, the pioneer Leonard W. Miller — recounts stories of drivers who quit on them before races, sponsorship dollars that failed to materialize and overt instances of racism and discrimination on and off the track. Though one of their ventures, Vanguard Racing, made headlines in 1972 as the first Black-owned team to enter a car in the Indianapolis 500, they never got a real chance to compete at the NASCAR Cup level.

Jordan isn’t even the first prominent sports figure to attempt a NASCAR crossover as The Boss. Tim Brown and Jackie Joyner-Kersee are two who tried and failed. In the late 1990s, Julius Erving teamed up with ex-NFL tailback Joe Washington to launch a Cup team. But their venture stalled as they struggled to leverage their existing sports celebrity for sponsorship — a cash flow problem that ultimately forced them down a level, into the Busch Series, where they scrambled to make races before quickly going under.

In 2003, Hall of Fame defensive lineman Reggie White joined forces with Super Bowl coach-turned-champion Cup franchise owner Joe Gibbs to help launch a driver development program to boost women and minority participation. But White died barely a year later, a decade before one of the first kids in his program, a Cuban American named Aric Almirola, grabbed his first Cup win at Daytona. And of course Scott, who ran his own team, was robbed of so many victories and didn’t even get to celebrate his breakthrough in Jacksonville, in no small part because of an official disdain for the optics of a Black man holding a trophy between two white grid girls. Only USA track and field CEO Max Siegel abides as the owner of Rev Racing, the feeder team for NASCAR’s Drive for Diversity program, but he races many levels down from Cup.

Even though Jordan, a lifelong NASCAR fan, enters the sport’s ownership ranks at a different time and level as the billionaire steward of the NBA’s Charlotte Hornets, he still just got here. It can take a Cup team years to get that first victory. Brad Daugherty, Jordan’s University of North Carolina teammate, had been a NASCAR owner for some two decades when he finally scored his first Cup win in 2014; the 7-footer couldn’t stop hugging people or ugly crying afterward. He hasn’t sniffed the victory lane since.

This is the game that Jordan was getting into when he joined forces with Joe Gibbs Racing driver Denny Hamlin to launch a new Cup team with Wallace as the driver. But Jordan made it clear from the outset that he wasn’t playing by the same rules. “We don’t sign checks to losers,” he cracked in a joint TV interview before this year’s Daytona 500, triggering nervous laughter from Wallace and 23XI co-owner Hamlin. Jordan wasn’t expecting to claim a championship out of the box. But he did bank on winning “a couple races,” he said. “If it’s more, I’ll be elated.”

All year the 23XI team would labor furiously to dial in the pace to run up front, only to see their efforts doom them to midpack results. All the while Jordan checked in constantly to trade updates for feedback. “He’s obviously new to the game, but he’s got a lot of knowledge about what goes on,” Wallace said. 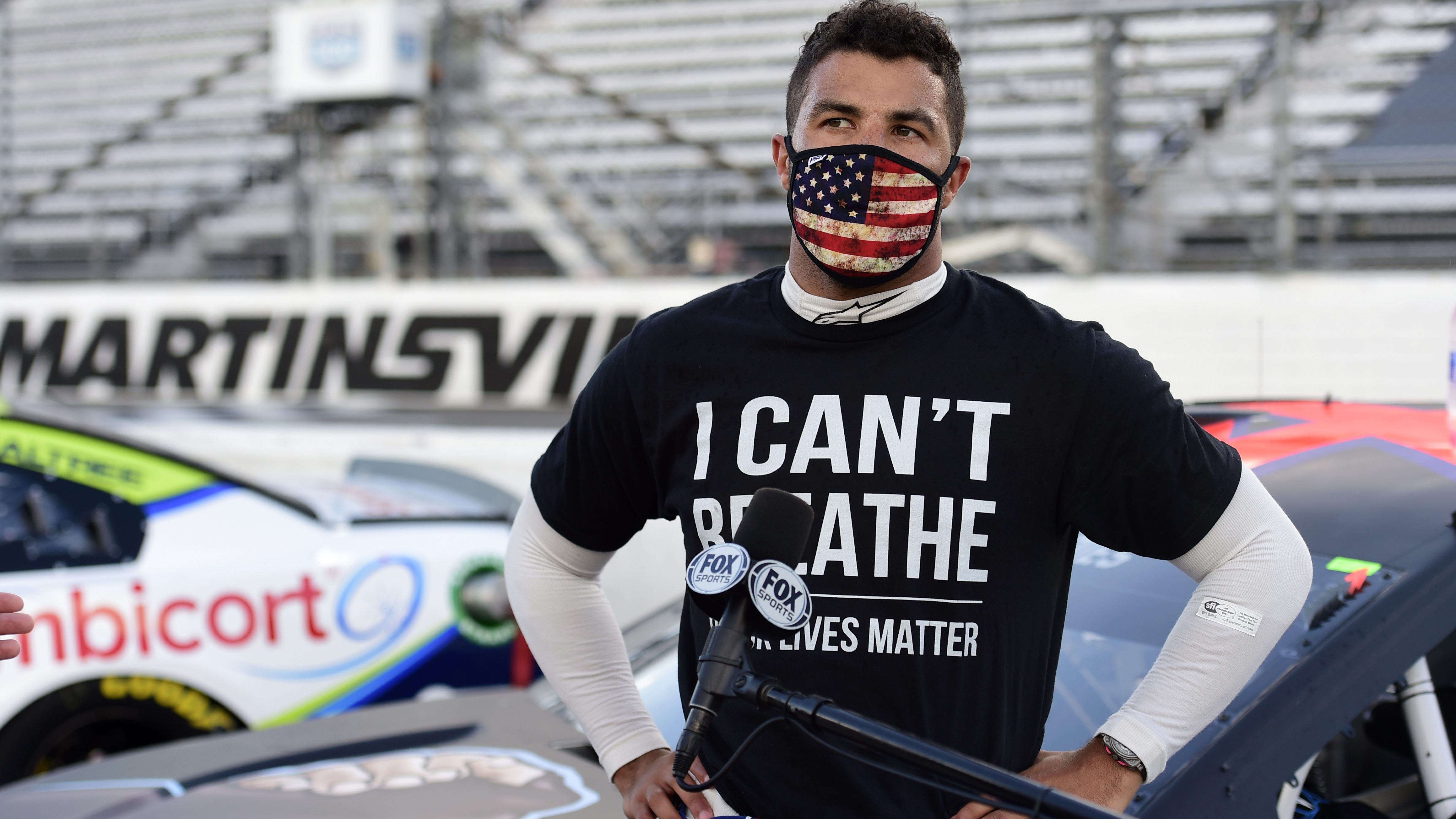 And yet: To hear those inside the company tell it, Wallace was working as hard as anyone. “He’s been attending meetings on Mondays and Tuesdays, coming into the shop and working with the guys, going to the simulator weekly, reviewing his postrace notes, giving feedback,” Wheeler said. “As much as you get frustrated sometimes because you’re not winning, you still go through the process of helping your team be better — and helping yourself.”

Pressing for a breakthrough, the 23XI team shook things up in September. Wheeler was promoted to competition director, and Barker took over as crew chief. The race shop’s resident Mr. Fix-It (“I don’t even know what my old job title would’ve been,” he joked), Barker knew Wallace a little bit from working with him here and there. But his promotion would join them in something akin to a marriage. For it to work, Wallace stressed communication. “He was specific in that he wanted somebody to hold him accountable, but with a family feel,” said Barker. “Not that he didn’t have it before. Just more of like when you go home and see your brothers, which was my personality already.”

It hasn’t taken much time for them to get comfortable with each other. After middling results in its first three races, the 23XI team trundled into Talladega feeling like it had more than a chance. Repeatedly, while commuting to the track with his fiancee, Wallace hesitated to put words to that feeling. It wasn’t until he found himself on the phone with Dylan “Black Mamba” Smith, another Black stock car driver, that Wallace finally said, “I’m gonna go out and win.” “It wasn’t cocky,” Wallace said. “It was just like, this is the weekend.”

After starting 19th, Wallace bided his time and, with No. 23 car spotter Freddie Kraft watching his back and front, sidestepped all the carnage Talladega threw their way — not least being the five-car crash. With another round of showers looming, the race turned into a sprint. “The whole field knew it was serious go time,” said Wheeler.

After ducking into the pits following the crash for fresh tires and a fuel top-off, Wallace drove up from 20th to take the lead and adroitly defended his position before the skies opened. As he climbed out of his car, Wallace beckoned for the rain to keep falling. And when it didn’t let up for 45 agonizing minutes, Wallace, at last, was declared the victor — which led to more precipitation in the form of delirious beer and soda spray showers.

Because of the weather, 23XI didn’t get to commemorate its accomplishment right away. It wasn’t until its car cleared inspection that NASCAR officials waved them into victory lane for the customary photo-op — and even then it was the scaled-down team. Hence the urgency for the party at Bubba’s, which was followed the next day by breakfast on McDonald’s and lunch on DoorDash for another shindig at the office.

“Tuesday morning was a little slow, but I got to spend it with everybody in the shop and thank them for their efforts,” said Wallace, who said he is most grateful to Jordan. “It’s cool to have his mentality, his leadership, his vision, because he wants everybody to be the best. He finds the weak points and pushes them to be better.

“Can’t get complacent though. It is our first win, and hopefully there’s many more to follow. We’ve just gotta keep going.”

In other words, the party’s over now. Back to work. The boss is watching.