With seven head coach openings, there is optimism diversity in the coaching ranks will improve

PHOENIX – The NBA’s version of the Final Four arrived with Black head coaches leading three of the four teams for the first time in the conference finals.

The Phoenix Suns’ Monty Williams, LA Clippers’ Tyronn Lue and Atlanta Hawks’ interim Nate McMillan are all Black coaches leading their teams into the conference finals. Lue sees the historic moment as a reminder that Black coaches are capable of leading successful teams.

“Three out of the four coaches left standing are going to be Black coaches. That says a lot about how we can coach. Hopefully, we can stop getting looked down upon so we can build a way for all the young Black head coaches,” Lue said.

There are currently seven head-coaching jobs open, presenting another opportunity for the NBA to improve diversity in the coaching ranks. The regular season ended with seven Black coaches out of 30 in a league that is predominantly Black.

Those identifying themselves as African American made up 74.8% of all NBA players, and in 2019, 81.9% of players were people of color, according to the Institute for Diversity and Ethics in Sport. The percentage of white NBA players in 2019 was 18.1%, a decrease of 1.2%.

In the midst of the NBA players’ social justice movement sparked by the murder of George Floyd by a Minneapolis police officer in 2020, there has been a call from players for the league to invest more into African Americans on and off the court. An increase in Black head coaches is among the requests. Boston Celtics guard Jaylen Brown said on Twitter last week, “Analytics: 7 NBA teams remaining 4 are led by African American head coaches” to bring light to the issue. The Celtics, Indiana Pacers, Washington Wizards, Orlando Magic, Dallas Mavericks, Portland Trail Blazers and New Orleans Pelicans all have openings.

Lue is optimistic that several of the openings will be filled by Black coaches.

“There are a lot of openings this summer,” Lue said. “Hopefully, these GMs [general managers] and owners will see that Black coaches are good coaches and hopefully give them an opportunity to be coaches.”

One reason for optimism is that several NBA sources tell The Undefeated that there is high interest from teams to hire African American coaches who could perhaps relate more strongly with the league’s predominantly Black players. ESPN’s Jackie MacMullan said on The Jump on June 17 that the Celtics want to hire “a coach of color” in acknowledged efforts to bring diversity to their franchise. Other sources said the Pelicans would like to add an African American head coach who could relate well with star forward Zion Williamson and the Wizards are interested in hiring a Black head coach, too.

There is no shortage of available candidates, and that list includes some who are coaching in the conference finals. Sources say Clippers assistant coach Chauncey Billups, a 2004 NBA Finals MVP, is a candidate for openings in New Orleans, Boston and Portland. Milwaukee Bucks assistant coaches Darvin Ham and Charles Lee, who has been linked to the Pelicans opening, are often mentioned candidates. Williams said Suns assistant coach Willie Green is also up for several head coach openings. MacMullan said Hawks assistant coach Melvin Hunt, a former interim head coach with the Denver Nuggets, should be interviewed for the openings as well.

“There are so many worthy candidates,” Williams said. “Willie Green is talking to teams as we speak. There is Darvin, Sam Cassell, Chauncey. These are guys that when I watch them, talk to them and think about when I was in their position, they were so far ahead of me. I’m like, ‘Wow.’ These guys deserve a shot. And I’ve had two jobs. Every chance I get I try to promote those guys. And if I can be of assistance to them when they’re going through the process or hope to be.

“I remember where I was when I was at that stage where they are. I think about how smart Willie, Chauncey, Darvin and Sam are. It’s pretty cool to see them get the mentions that they’re getting. People are looking out for them in that regard. I hope they get their shot.” 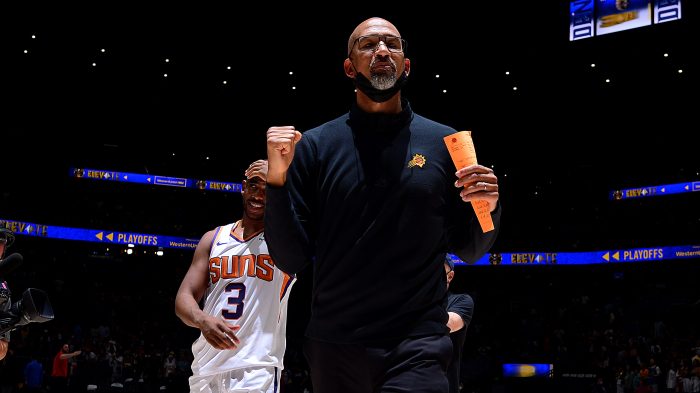 The Suns are the only team in the NBA that has a Black head coach and general manager in Williams and James Jones, respectively, who are both also former NBA players. Williams was named the recipient of the 2021 Michael H. Goldberg National Basketball Coaches Association Coach of the Year Award, as voted on by the league’s head coaches. Williams coached the Suns to a 51-21 record this season, which was second-best in the NBA, and their first division title since 2007. Jones was named the 2020-21 NBA Executive of the Year on Sunday.

Suns All-Star guard Devin Booker, who is African American and Mexican American, says that having a Black head coach and general manager who are also former players has been beneficial for him.

“People are understanding what is going on and are realizing who the real basketball minds are,” Booker said. “They put countless hours into their craft and their work. They’ve seen those situations from being on the court before. It’s easier for them to approach us with conversation when they have an understanding of where we are coming from. That connection with the general manager and head coach with the players is very important if you want to win big. …

“You have to give your props to Ty out there coaching [the Clippers]. The game is transforming. You see more African Americans in position. And I think it’s going to continue to see success and understand how important the relationship aspect of it is.”

Success could be the best way for African American coaches to open the door for other Black head coaches, and the conference finals offer that opportunity.

“The big thing for us as Black coaches is to win titles to put us on the level so people will look at us as some of the good coaches in this league,” McMillan previously told The Undefeated.

So do Williams and Lue feel pressure to succeed in order to open the door for more Black head coaches?

“I don’t feel pressure,” Williams said. “I do feel a responsibility to work hard to keep myself in a position of professionalism.”

Said Lue: “I don’t feel extra pressure. But I do want to do well so they can continue to see that.”