Bill Russell, two-time NBA Hall of Fame inductee, captivates all those he encounters

UNCASVILLE, Conn. – Paul Pierce shared a picture from his phone that he truly cherishes. The image features Kevin Garnett, Ben Wallace, Chris Webber and himself sitting in awe and focused on the words of fellow Basketball Hall of Famer Bill Russell. The 11-time NBA champion, trailblazer and activist who garnered such elite NBA superstar attention is often viewed as the brightest star in league history for what he has done on and off the court.

“The main thing I remember is the captivation,” Pierce told The Undefeated of the private conversation in May. “He was telling us stories from the days when he was playing. He is still knowledgeable about the game today even at [his] age. He captivated all of us. In the picture, we’re all just listening to him. We are amazed by him.

“We have to cherish all these moments when we get in these types of environments. In this day and age we live in, you are seeing so many people go. So, to be around these types of legends and have this opportunity is a true honor. I cherish all of it.”

Back in May, Russell, 87, learned at the class of 2020 Hall of Fame weekend that he would be a member of the next class as a coach. Russell led the Boston Celtics to two titles as a player-coach and also coached the Seattle SuperSonics and Sacramento Kings. The five-time NBA MVP was first inducted in Springfield, Massachusetts, in 1975 for his legendary playing heroics that also included 12 All-Star appearances with the Celtics, an Olympic gold medal and two NCAA championships at the University of San Francisco.

Moreover, Russell is known for being a voice against racism and an activist since his storied days as a Celtic. He has stood alongside Martin Luther King Jr. and Muhammad Ali. Russell was awarded the Presidential Medal of Freedom by President Barack Obama in 2011. And while he painfully endured racism during his career in Boston, today there is a statue in his honor outside Boston’s City Hall. 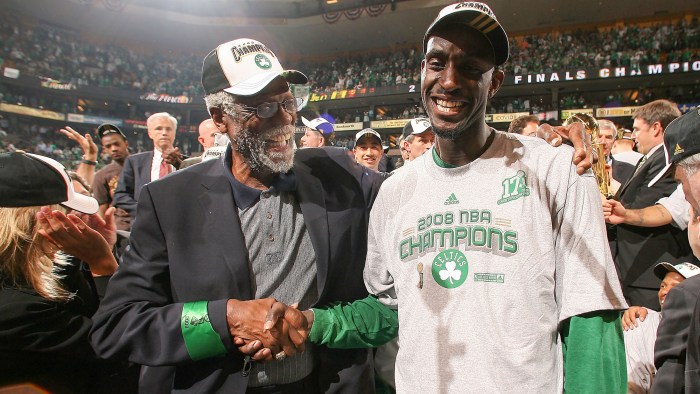 From Russell to KG to today’s Celtics: Being a black player in BostonRead now

Pierce, Garnett, Wallace and Webber appreciated every second of their time with Russell at a private room at the Mohegan Sun Casino back in May.

“That was so surreal. He is a pioneer amongst us. Me, personally, I don’t think he gets enough credit. Not at all,” Wallace said. “He played, coached, fought the Supreme Court. Fought racist society for Blacks. That kills me that he doesn’t get to get enough credit.

“We also talked about him being a freakish athlete. He was a high jumper. A long jumper. Basketball. He can do it all. He did it all himself.”

Russell wrote on Twitter last week that he declined to be a part of the news conference and some other Hall of Fame activities last weekend due to coronavirus concerns. Among the events Russell did attend was the Hall of Fame Tip Off Celebration and Awards Gala on Friday night at the Mohegan Sun Casino, where he accepted his second Hall of Fame jacket.

“At the dinner on Friday night, he said, ‘They’re cheering for me.’ He is still in awe of [the respect for him at] this late stage of his life,” Hall of Famer Spencer Haywood told The Undefeated.

Russell also joined Pierce, Wallace, Webber and the rest of the long list of inductees into the Hall of Fame on Saturday night at the induction ceremony at the MassMutual Center in Springfield. When it was his turn, a video tribute was aired, opening with Obama praising him for his coaching success, accolades as a player and off-the-court impact.

“Bill Russell, perhaps more than anyone else, knows what it takes to win and what it takes to lead,” Obama said. “That has always been true off the court as well. As I mentioned when I gave him the Medal of Freedom, this is a man who marched with Dr. King and stood by Muhammad Ali. He endured insults and vandalism. But he never stopped speaking out for what was right.”

“That moment was so surreal,” Haywood said of being on the stage with Russell. “I had a tear in my eye. It’s Bill Russell. Somebody you admired for standing up for everything. Bill Russell was the person everyone called upon. They looked to Bill Russell for guidance.”

When former Toronto Raptors and Miami Heat power forward Chris Bosh gave his speech as the last Hall of Fame inductee of the night, it was Russell who appeared most in shock by the enthusiastic words he said to Webber: “Hey, Chris, we’re going into the Hall of Fame with Bill Russell, bro. That’s crazy!”