One of the most decorated women in the sport’s history added a final, selfless chapter to her legacy with her return in the 4×400 prelims

A bitter taste was the feeling many track and field fans felt last week when it seemed that the remarkable Allyson Felix would have her final professional track race result in a tame third-place finish.

The bronze medal won by the U.S. in the mixed 4×400-meter relay on the opening evening of the first World Athletics Championships on U.S. soil disappointed those at Hayward Field in Eugene, Oregon, hoping to see Felix win one last global title.

It wasn’t a major letdown for the 36-year-old, who is ready to retire after almost two decades of an elite but exhausting running career. And as someone not keen on having an extended athletic career into her 40s like tennis great Serena Williams, golf legend Tiger Woods and famed NFL quarterback Tom Brady, Felix firmly stated several times that this was it for her on the track.

“This is the last one, I feel a lot of gratitude, a lot of love tonight and it is a special night, I won’t forget it,” she told Track and Field Black History reporter Anderson Emerole. “I wasn’t sure if I was going to make it to this one [world championships]. But I’m very happy that I was able to take part in it. To have a world championship at home is so special and I didn’t know it was going to happen and it was so cool.”

But a funny (and fitting) thing occurred Friday night. After Sydney McLaughlin set another world record in the 400-meter hurdles and Dalilah Muhammad finished third in the same race, the U.S. desperately needed a runner to fill in for the women’s 4×400 relay prelims Saturday. And who better than arguably the greatest runner in the relay event’s history, both Olympics and world championships combined, to be that emergency replacement option? 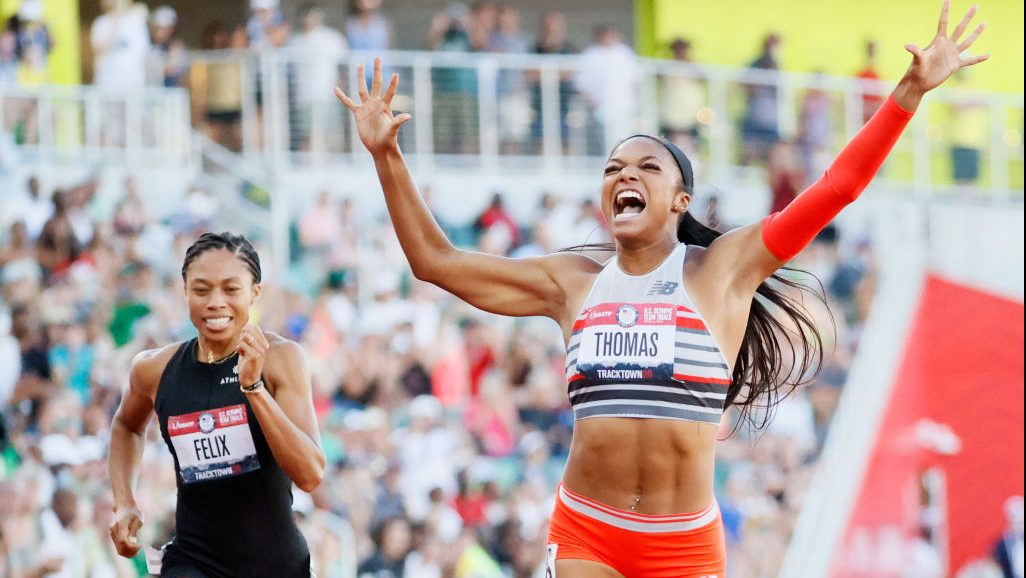 200-meter champion Gabby Thomas, inspired by Allyson Felix, looks to create legacy on and off the trackRead now

“I was at Hot Wings Cafe [in Los Angeles], like, one of my favorite cheat meal restaurants, having hot wings and a root beer float,” Felix said Saturday after helping lead America to the finals of the women’s relay. “And I was diving into that when I got a phone call. And they asked if I would be willing to come back and run a round and help the team get a [finals] position. So I dropped the wing and [coach] Bobby [Kersee] gave me a few workouts and jumped on a plane to head back here.”

That altruistic contribution from Felix to extend her track career by one race provided the McLaughlin-led team a chance for more USA domination in the final. And dominate they did again in the mile-relay title race, capping off the most successful World Athletics Championships this country has ever had with the 13th and final gold medal coming for the red, white and blue. Team USA set a world championship record with 33 medals total over 10 days at its TrackTown, with Felix stepping up to participate in the conclusion.

Gold is the appropriate final result on the track for Felix, a 14th world championship gold medal and 20th medal overall at the International Association of Athletics Federations’ crown event.

From a reserved teen prodigy with world-class ambition at age 18 to an outspoken matriarch at 36, we’ve seen Felix grow up in front of the world and have truly legendary longevity. The 200-meter gold medalist from the London Games in 2012 is one of only five American track athletes, male and female, to compete in five Summer Games. (Amy Acuff, Abdi Abdirahman, Gail Devers and Willye White are the other four. Willie Davenport, the 110-meter hurdles gold medalist, competed in four Summer Games and was the first Black American athlete to participate in a Winter Games in 1980.)

When you live in a nation that lays claim to several world-class sprinters, it’s difficult enough to make even one Olympic or world championship team. Never mind that the process to qualify is based on performing well at only one meet. And it’s even more of an onerous task to accomplish straight out of high school like Felix was in 2004. To make an Olympiad five times is the rarefied air that Felix ascended to last year in making the pandemic-delayed Tokyo 2020 Games, let alone getting a final individual Olympic medal with a bronze in the 400-meter race.

Adding to that once-in-a-generation aura for Felix is her having to unexpectedly fight intense battles with her sponsor and her own body. Long viewed as an epitome of grace and class, Felix has never been embroiled in any hostile drama with a rival or anyone in the media.

The only contentious moment of her career wasn’t her fault: The infamous 2012 U.S. Olympic trials photo finish race between her and former training partner Jeneba Tarmoh for the final U.S. women’s spot in the 100 meters for the London Games. The two runners were tied, and Tarmoh gave up her spot rather than race against Felix.

Felix never disparaged any opponent, any coach or practically anyone when it came to life on the track. Not after her back-and-forth “first or second” race rivalry with Jamaican Veronica Campbell-Brown or the polarizing dive across the finish line by Shaunae Miller-Uibo of the Bahamas to deny Felix a second individual gold medal in the 400-meter race in 2016 in the Rio de Janeiro Games.

Felix’s avoidance of conflict makes her public criticism of and departure from Nike all the more commendable. She was the picture-perfect athlete big corporations dream of sponsoring and having as their spokesperson, and why Nike was delighted she left Adidas and signed with it in 2010. She would be the last star athlete you would expect to publicly castigate a powerful brand, and it’s something she told Time magazine directly.

“You need to make sure you don’t say too much,” she said. “It has to be this pretty, pretty package. That’s always been in the back of my head and that’s not real.” 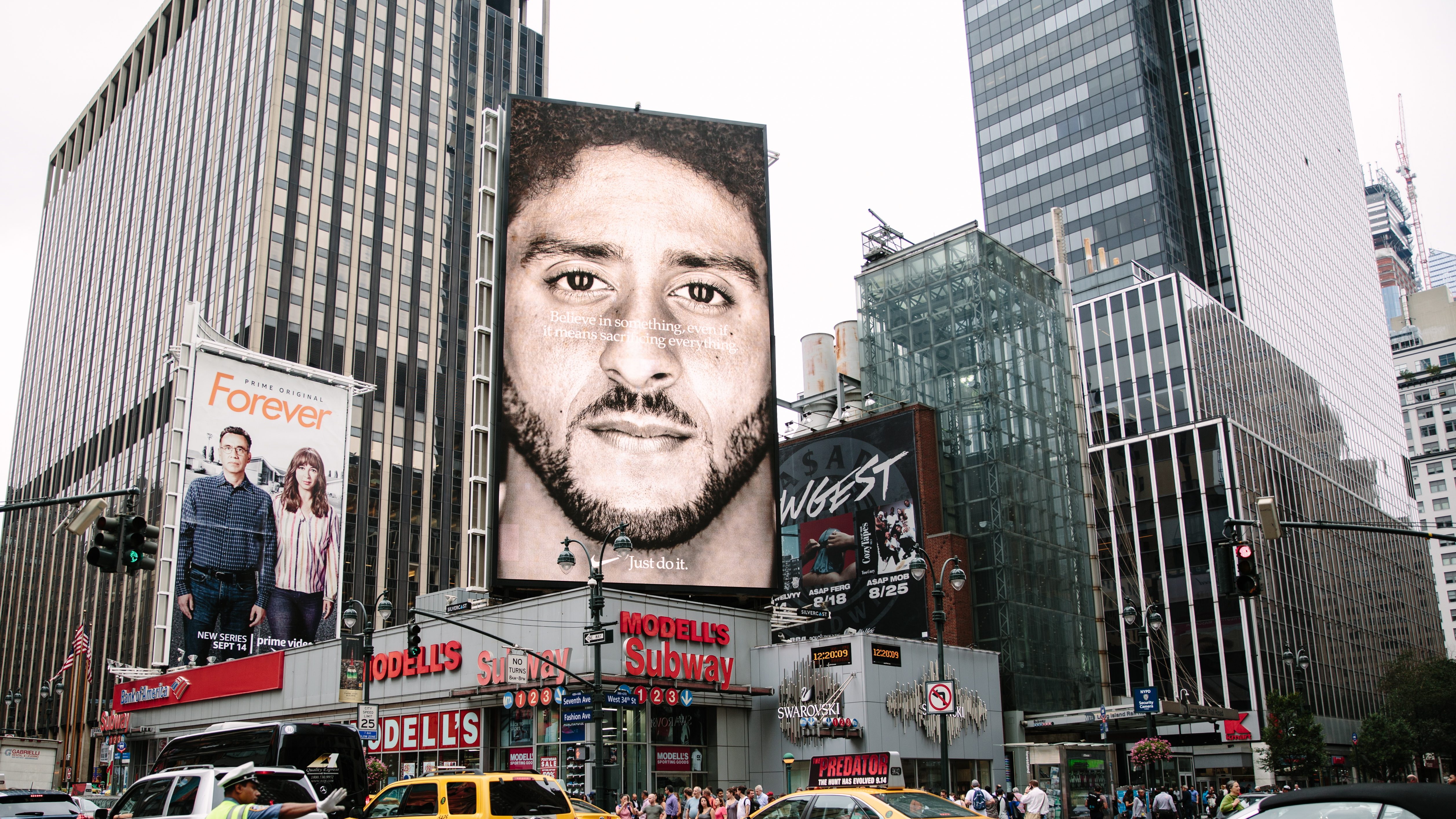 And yet, she spoke out strongly in 2019 when she wrote that, during negotiations for a new contract, the company sought to cut her pay by 70% and refused to “contractually guarantee that I wouldn’t be punished if I didn’t perform at my best in the months surrounding childbirth.”

Through tweets and myriad speeches, she balanced her usual calm grace with flashes of passion to hold Nike accountable for its lack of respect for its marketed female athletes when they get pregnant. Nike consequently changed its policy and added pay protections for pregnant athletes.

“Nike wanted to use me in a commercial for the Women’s World Cup,” Felix said in a TED Talk in April. “I couldn’t believe it. Nike wanted to use me to tell women and girls they could do anything, even though the contract before me said the exact opposite. I know I was afraid, but I did it anyway.”

In every one of her must-see monologues nowadays, Felix continues to repeat her message.

Notably enough, Felix emphasized, “I don’t hate Nike, nothing like that, I’ve made some great friends there and I think they do really important work.” There was nothing inauthentic or fake about her saying that, especially considering that she followed it up by also indicating that “there was just some room of improvement where I think they could have been better.”

That intrepid, uncomfortable battle with Nike was an emotional roller coaster Felix still calls “really scary.” But that pales compared to Felix experiencing the biggest fight of her life and the life of her first child.

Felix described the emergency C-section she had at 32 weeks because her daughter Camryn’s fetal heart rate was slow as a “traumatic” experience. She discovered that, according to the U.S. Centers for Disease Control and Prevention, Black women are three times more likely to die from a pregnancy-related cause than white women. Felix plans to continue her campaign to raise awareness of this ongoing health crisis in her post-race career.

“Allyson was always that girl since she was 18 years old and you grew up watching Allyson,” Muhammad, the gold medalist in the 400-meter hurdles in the Rio de Janeiro Games in 2016, said to NBC Sports. “To be able to just perform at your best for such a long period of time, being a mom doing it and just representing women in sports so beautifully … I just also want to be that person for the next generation like how Allyson was for me.”

“It does seem like she’s had a lot of success and it comes so easily, but to be able to see the struggle, I think that was very important and a vital part of her journey,” Nia Ali, 100-meter hurdles world champion in 2019, said of Felix, also to NBC. “And I was grateful to see that transparency from her, I must say.”

But it’s not just the U.S. women praising Felix, but also the U.S. men, highlighting further how revered she is in the entire track community.

“To be able to just perform at your best for such a long period of time, being a mom doing it and just representing women in sports so beautifully … I just also want to be that person for the next generation like how Allyson was for me.”

“Allyson Felix set such a high standard, not only for females but for males as well because she has done nothing but made this sport better,” current back-to-back 110-meter hurdles world champion Grant Holloway told NBC.

“I can see a lot of little girls and even boys looking at that and saying that’s a strong individual, a strong Black individual that I want to model my life after,” 200-meter world champion Noah Lyles said of Felix.

And so, when all signs pointed to Felix being more than content with her track career ending with a third-place relay result, the track gods stepped in to change the script.

Some fans hoped she would run in the 4×400-meter relay final, but Felix made it clear that she was only asked to fill in for the first round. Even with an injury to Muhammad in the warm-up Sunday night to rule her out of the championship’s last event, there was a spiritual, needed passing of the baton for this sport with Felix watching the final from afar instead of having another last run. Because she passed the baton to the next generation the day before in handing the stick off to Kaylin Whitney in the prelims.

The storybook ending to Felix’s track career was written long before these two weeks in the Pacific Northwest. And like many other great authors, the Los Angeles native is following the end of one book with the next one already in its nascent writing stages. Her desire to make her company Saysh a leading apparel brand for women is well underway, combining her desire to remain a prominent, magnanimous advocate for women in sports and all walks of life.

Tasting more success off the track is the next chapter in Felix’s life story. And track fans domestically and worldwide won’t feel anything bitter about that.