After winning silver at the Montreal Olympics, two Black women were treated as heroes in their Southern hometowns

When women’s basketball made its Olympic debut in Montreal in 1976, not much was expected of the U.S. team. It had finished a dismal eighth at the World Championships the year before and qualified for Montreal at a last-minute tournament that determined the final two teams in the field. But when the U.S. won silver, the unexpected medal thrilled American fans and inspired a series of welcome home celebrations for the players. In this excerpt from his new book, Inaugural Ballers: The True Story of the First US Women’s Olympic Basketball Team, author Andrew Maraniss tells the story of the post-Olympics receptions for two of the team’s Black stars, Trish Roberts and Lusia Harris.

The most socially significant celebrations took place in Monroe, Georgia, and Cleveland, Mississippi, homes of Trish Roberts and Lusia Harris. Both were Deep South towns dripping with patriarchy and ugly histories of racist violence — not the kinds of places where white citizens held up Black women as heroes. But now, Roberts and Harris had brought home rare international glory.

Roberts’s hometown of Monroe, Georgia, owed its existence to the two original sins of white supremacy in America: the forced removal of Native Americans by white colonizers and the institution of slavery. Home to numerous cotton-producing slave-labor plantations after the removal of the Cherokees, and to exploitative sharecropping farms after the Civil War, Monroe counted among its prominent citizens men such as Clifford Walker, a Georgia governor in the 1920s who was a member of the Ku Klux Klan, and Prince Hulon Preston Jr., a U.S. congressman in the 1950s who adamantly opposed school desegregation. In 1946, just nine years before Roberts was born, Monroe had been the site of one of the most notorious lynchings in postwar history, when two Black couples were murdered by a mob of white vigilantes who had been encouraged by Georgia governor and KKK member Eugene Talmadge. 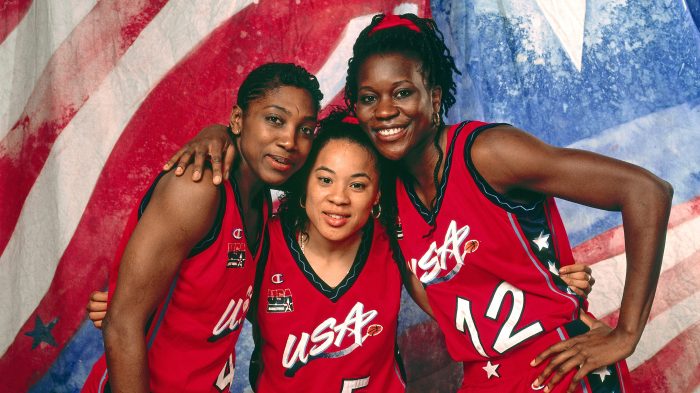 When Roberts’s flight arrived at Atlanta’s Hartsfield Airport, her mom, brother, niece, and nephew were there to greet her. They drove Trish to her sister’s house nearby, where her mom insisted that she put on her blue sweatsuit and silver medal. Trish refused. She was tired. Couldn’t they just do this when they got home to Monroe? When her mom started crying, Trish relented, digging through her suitcase and putting everything on. Exhausted, Roberts was relieved when her brother-in-law offered to drive everyone to Monroe, an hour east of Atlanta. But just as they arrived on the outskirts of town, the flashing blue lights of a police car appeared behind them. How embarrassing, Roberts thought, to be pulled over in her Olympic sweatsuit.

But that’s when her mom let her in on the secret — it was “Patricia Roberts Day” in Monroe, and the police officer was there to lead them into town for a parade. The whole crying “put on your sweatsuit” routine was a setup. All the stores in Monroe had closed for the day, and people lined the streets, waving as Roberts drove into town. A big stage had been set up in front of the county courthouse, where the mayor presented Roberts the key to the city and a bouquet of roses. That would have been enough of a surprise. But just then Roberts’s high school basketball teammates came riding up in a pickup truck and Roberts was escorted to a convertible for a parade through downtown and out to the school, where the gymnasium was packed with admirers. Roberts walked down a red carpet to an oversized chair, with her family seated in a special section in front of her. A procession of former teammates, coaches, friends, and even Roberts’s pastor offered their congratulations and told stories about her life. Roberts hadn’t realized anyone was following her career so closely. “It was unreal,” she recalled. “I was crying through the whole thing.” 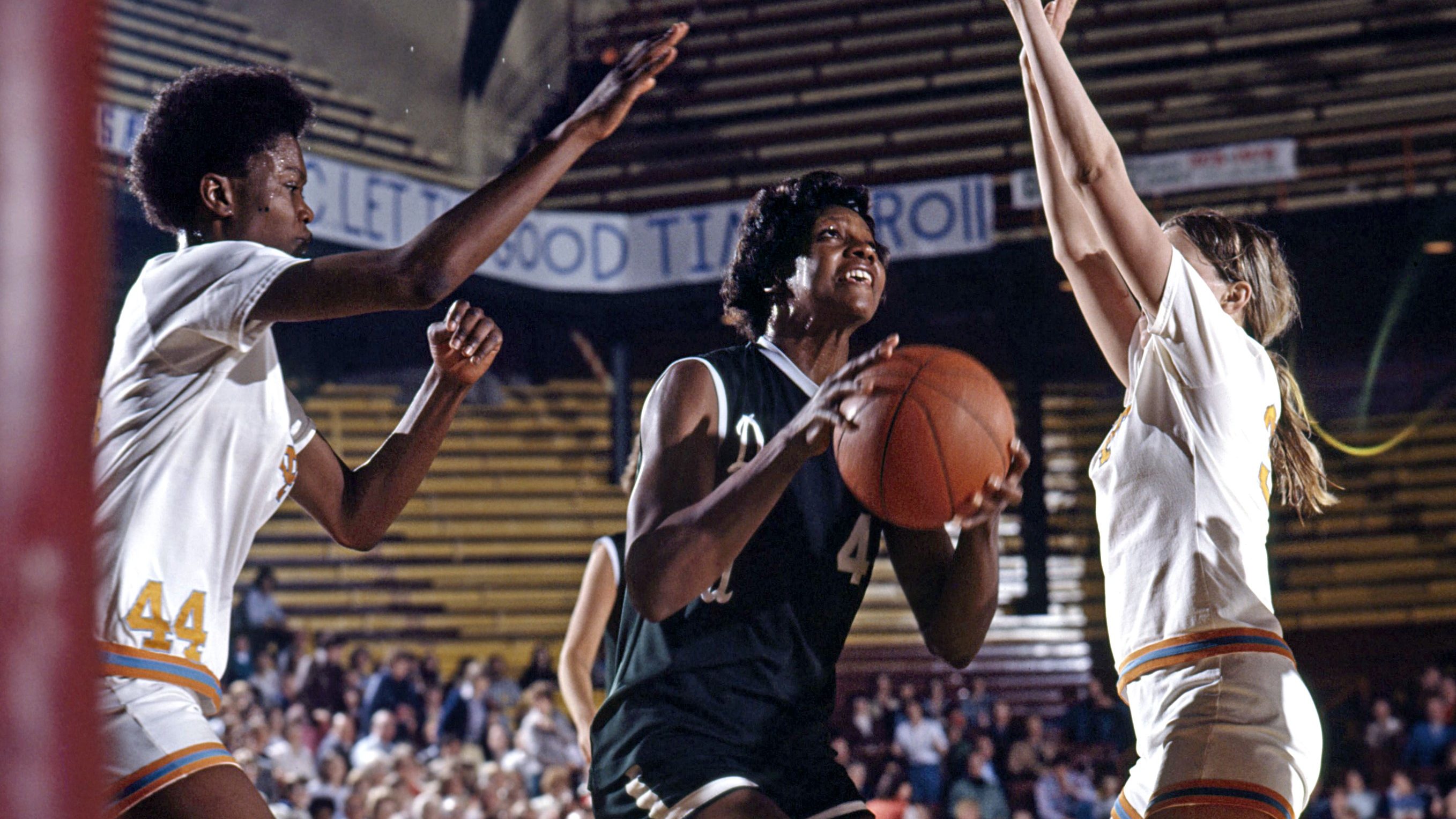 After the remarks, everyone went outside for a cookout, Black and white residents of a town with a troubled history grabbing paper plates, sitting down to eat together, and celebrating one of their own. “Imagine,” Roberts said. “A whole town having a party. To this day, it was the most wonderful event in my life.”

A similar scene unfolded in the Mississippi Delta when Lusia Harris returned home. Governor Cliff Finch kicked off “Lusia Harris Day” at Delta State in Cleveland, Mississippi, by telling Harris, in front of 2,000 well-wishers, that all Mississippians were proud of her: “Proud of your accomplishments, proud of the examples you have set as a student-athlete and a person.” Harris, the governor said, was a goodwill ambassador for the state of Mississippi. After the Delta State marching band played the Olympic theme, the mayor of Cleveland presented Harris with a gift and said, “Except for you, I don’t know how we could have gotten Cleveland mentioned on three national networks.”

Wearing her silver medal around her neck, Harris thanked everyone for all the encouraging letters they’d sent her in Canada, admitting she was a bit embarrassed by all the attention. “If I knew that I was going to have such a crowd when I got back,” she said, “I think that I would keep going.” Members of Harris’s Delta Sigma Theta sorority presented her with red and white carnations, and the Delta State student government association gave her green and white carnations.

Seated beside Harris in metal folding chairs on stage were her parents, one of her sisters, and a cousin. Harris was touched by her aging parents’ presence and proud they were able to be treated like royalty for the first time in their lives. “I think it’s real nice,” her father said. “It couldn’t have been done any better.”

Decades later, Harris said she believed the affection and appreciation shown to her that day by the politicians and university leaders was genuine, that the events had been meaningful and heartwarming. And it was certainly well deserved. To this day, Nancy Lieberman maintains that “the most important thing going for our team was Lucy Harris,” calling her one of the greatest post players in the history of the sport. 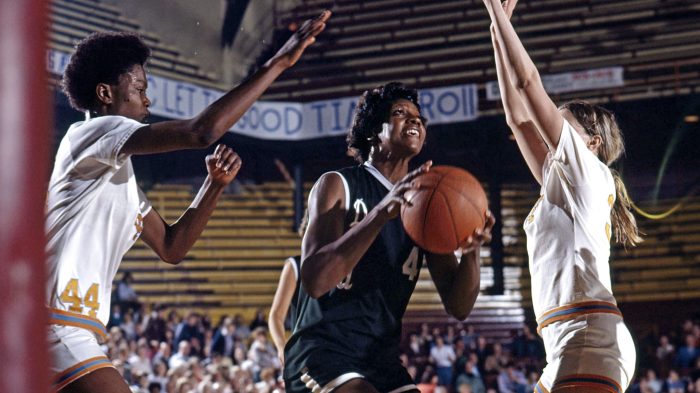 ‘The Queen of Basketball’ Lucy Harris finally gets her flowersRead now

Still, the scene in Cleveland illustrated an enduring hypocrisy.

The best-known Black woman living in the Mississippi Delta at the time was Fannie Lou Hamer, the courageous civil rights leader who had grown up the twentieth child of sharecroppers in Sunflower County. Hamer’s fearless advocacy for voting rights and economic opportunities for Black citizens in the South would earn her international respect as a heroic figure in the civil rights movement, but she was not the kind of Black woman most white Mississippians chose to celebrate. They threw her no parades. Instead, they subjected her to a vicious cruelty: a wealthy landowner fired her for attempting to vote, a doctor performed a hysterectomy without her consent, and jailers beat her brutally after she attempted to desegregate a bus station.

Lusia Harris’s rise to basketball prominence was a living refutation of the white supremacist system that inspired Fannie Lou Hamer’s activism. But Harris’s basketball success could be more easily appropriated by white civic boosters than Hamer’s righteousness. Everyone was eager to claim this Black woman, a silver medalist, as one of their own. And one speaker that day in 1976 admitted as much. After the chamber of commerce presented Harris with an engraved silver bracelet and the Delta State alumni association gave her a jewelry case to display her medal, the president of the Delta State booster club took the microphone.

“It’s easy to boost a winner,” he told the sharecropper’s daughter. “We’re behind you all the way.”

Excerpted from INAUGURAL BALLERS The True Story of the First US Women’s Olympic Basketball Team by Andrew Maraniss © 2022 by Andrew Maraniss. Published by arrangement with Viking Books for Young Readers, an imprint and division of Penguin Random House LLC.