Part 7: The NCAA prepares to ax the summer ‘shoe circuit,’ where the game was both magic and mercenary

NEW YORK — Goodbye, July. I’m going to miss you. You won’t be the same next year.

Die-hard hoopers recognize July as the pinnacle of high school basketball. July is when schoolboys perform next-level magic on the “shoe circuit,” a series of tournaments sponsored by Nike, Adidas and Under Armour. July is when college coaches swarm to restock their rosters. It’s when an unknown kid could scrap his way onto the court and walk off with a Division I scholarship. When “D-Free” dreams came true.

But an NCAA commission, formed to stop illegal payments to college players, is blaming the shoe circuit for contributing to the corruption. The commission says “non-scholastic basketball,” also known as AAU hoops, has too many crooked coaches and shady shoe salesmen passing money under the table. The NCAA commission recommends banning college coaches from the circuit and restricting July recruiting to a few invitation-only camps controlled by — wait for it — the NCAA.

I went to New York City recently to see what the game will soon be missing.

The Adidas Gauntlet Finale was held in a gleaming four-court Manhattan complex called Basketball City. Walking into the venue provided a dose of the intense energy you only feel at AAU events. It’s a totally different vibe from even a championship game during the school season, when the gym is filled with friends, family and school pride — and most of those on the court will never play in college.

Here at the Gauntlet, ballplayers mill about like herds of giraffes, stretch out on the floor between games with headphones clamped on their ears, and hurtle up and down the court in the typical frenetic AAU style. Shooters are abundant. Dunks come cheap. The average height of everyone in the building, including moms, seems to be about 6-foot-5. Compared with a school game, this feels like Rucker Park.

Families from all over the country attended the New York Adidas Gauntlet tournament July 12-15, hoping the young player they came to support would impress one of the dozens of collegiate coaches in attendance. Parents moan and scream, exult and despair. Many are nearing the end of a years-long journey, costing painful amounts of time and money, hoping it will pay off with a scholarship. They try not to watch all the college coaches: Duke’s Mike Krzyzewski, Kentucky’s John Calipari, Kansas’ Bill Self and many other famous faces at Basketball City. The kids, meanwhile, play like banshees. The air practically crackles with athleticism, hunger and ambition.

I know that people have long said the circuit has too many isos and jacked 3s, poor fundamentals and not enough practice. The NCAA commission is proposing to replace the circuit with four weeklong regional camps, with 600 players invited to each location. The best players from the regional camps would attend a four-day national camp. Staffed by high school and college coaches, this camp network would teach kids proper form and footwork and instill them with the finer points of the Princeton offense or whatever.

Camps? C’mon. What’s more fun: hooping with your homies every spring and summer, getting buckets from city to city, with legendary college logos packing the sidelines? Or doing a bunch of defensive slides and closeout drills, then trying to win a scholarship playing 5-on-5 with a new offense and a bunch of dudes you just met? 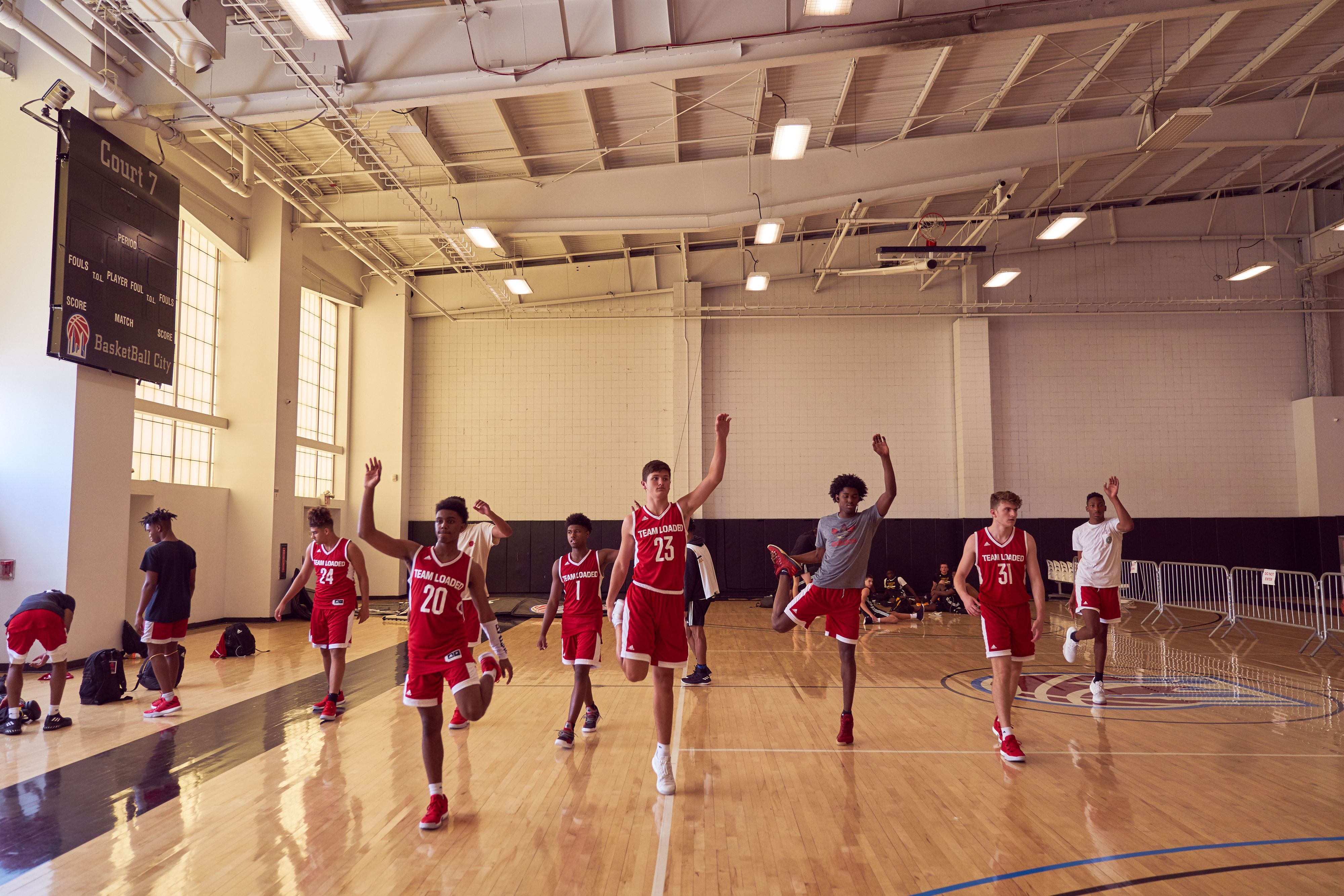 Team Loaded of North Carolina warms up before the start of their match on July 14. 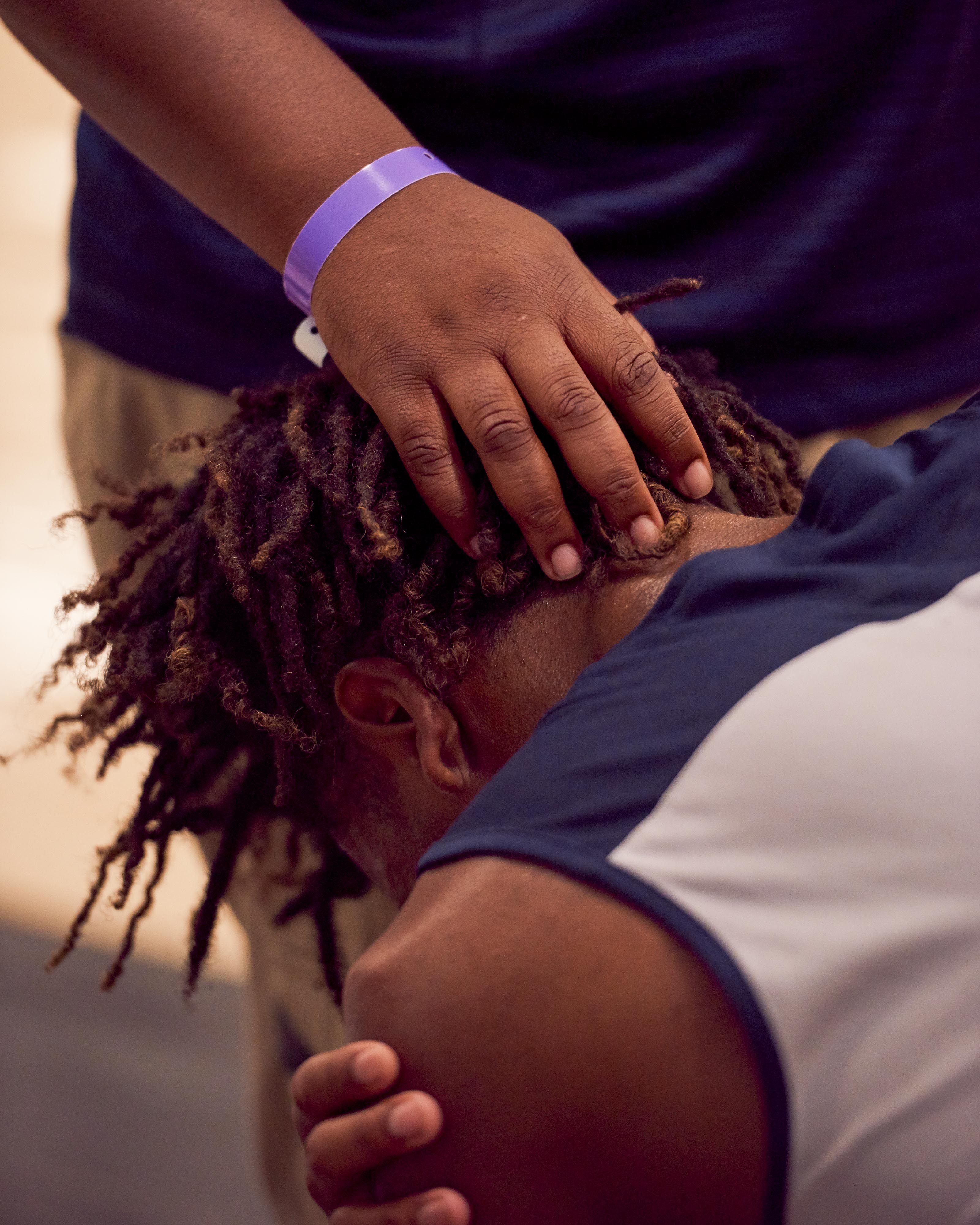 A coach of the Mass Rivals U17 team consoles an injured player after he attempts to save the ball from going out of bounds. 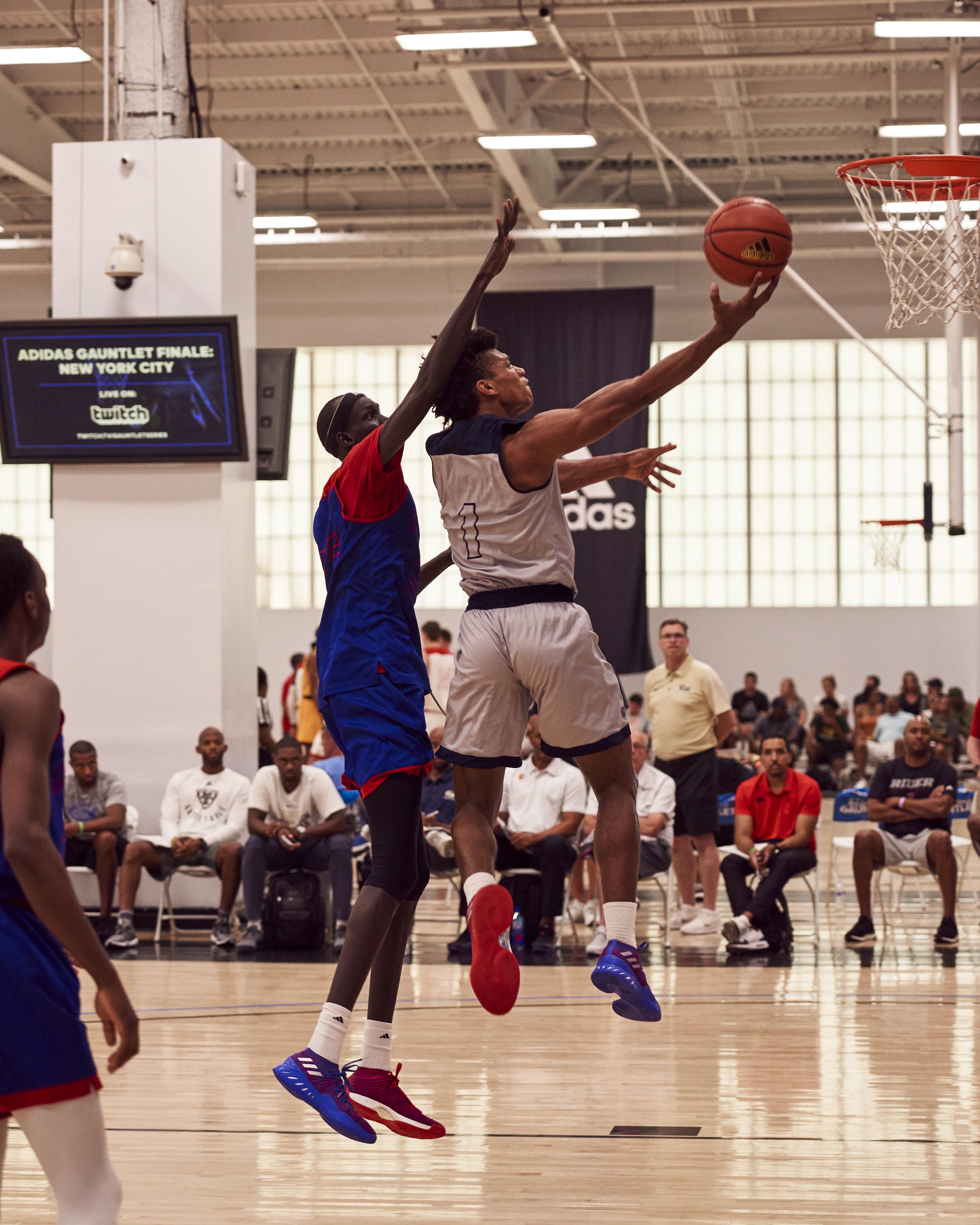 Tanahj Pettway of the Mass Rivals goes up for a layup as a row of scouts look on July 14. 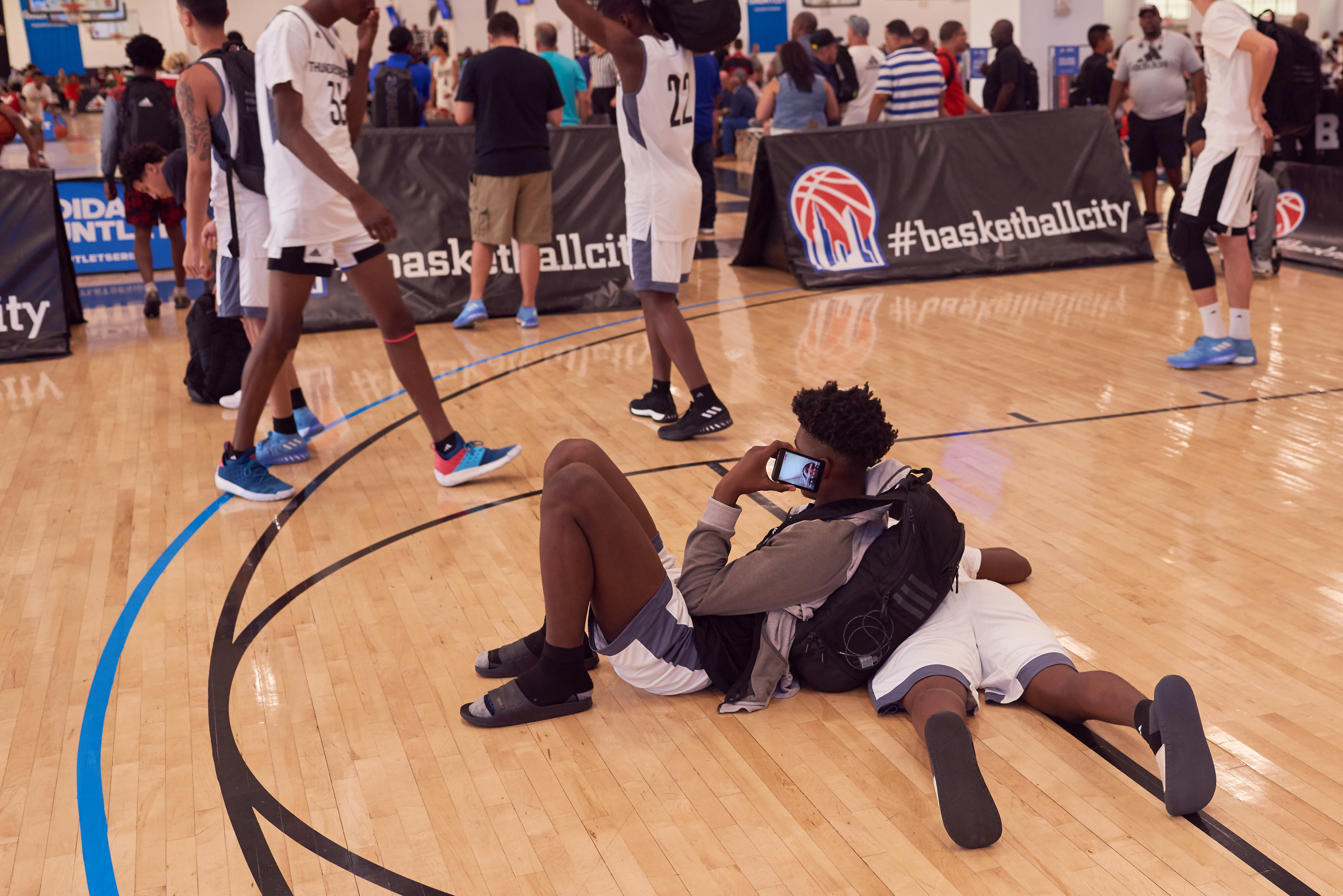 The young athletes often found some peace and quiet killing time between matches on the unused courts around the Pier 36 auditorium. 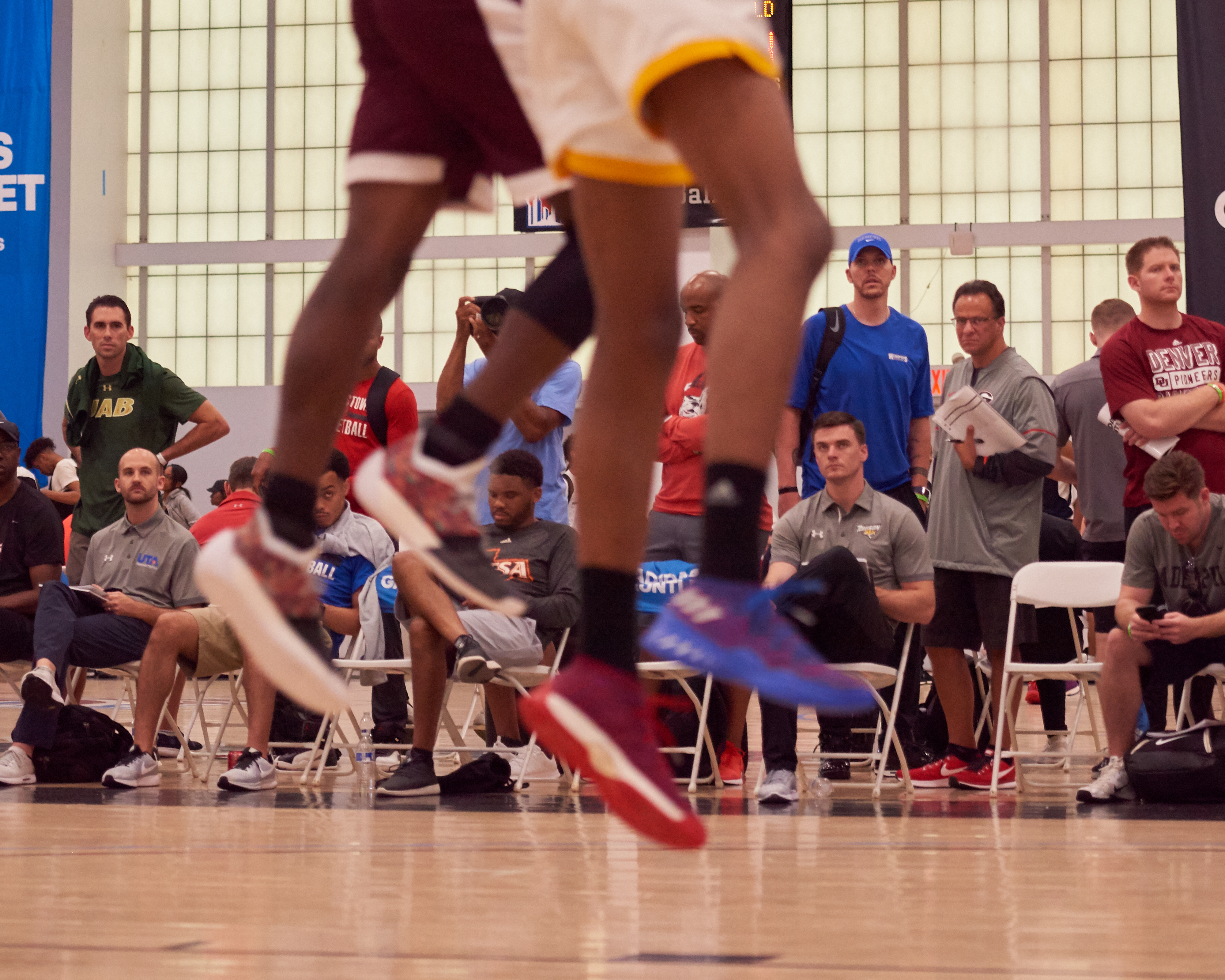 Coaches from all over the country lined along the middle aisle of Basketball City at Pier 36, positioning themselves between all four active courts, scouting and taking note of the young players they came to see. 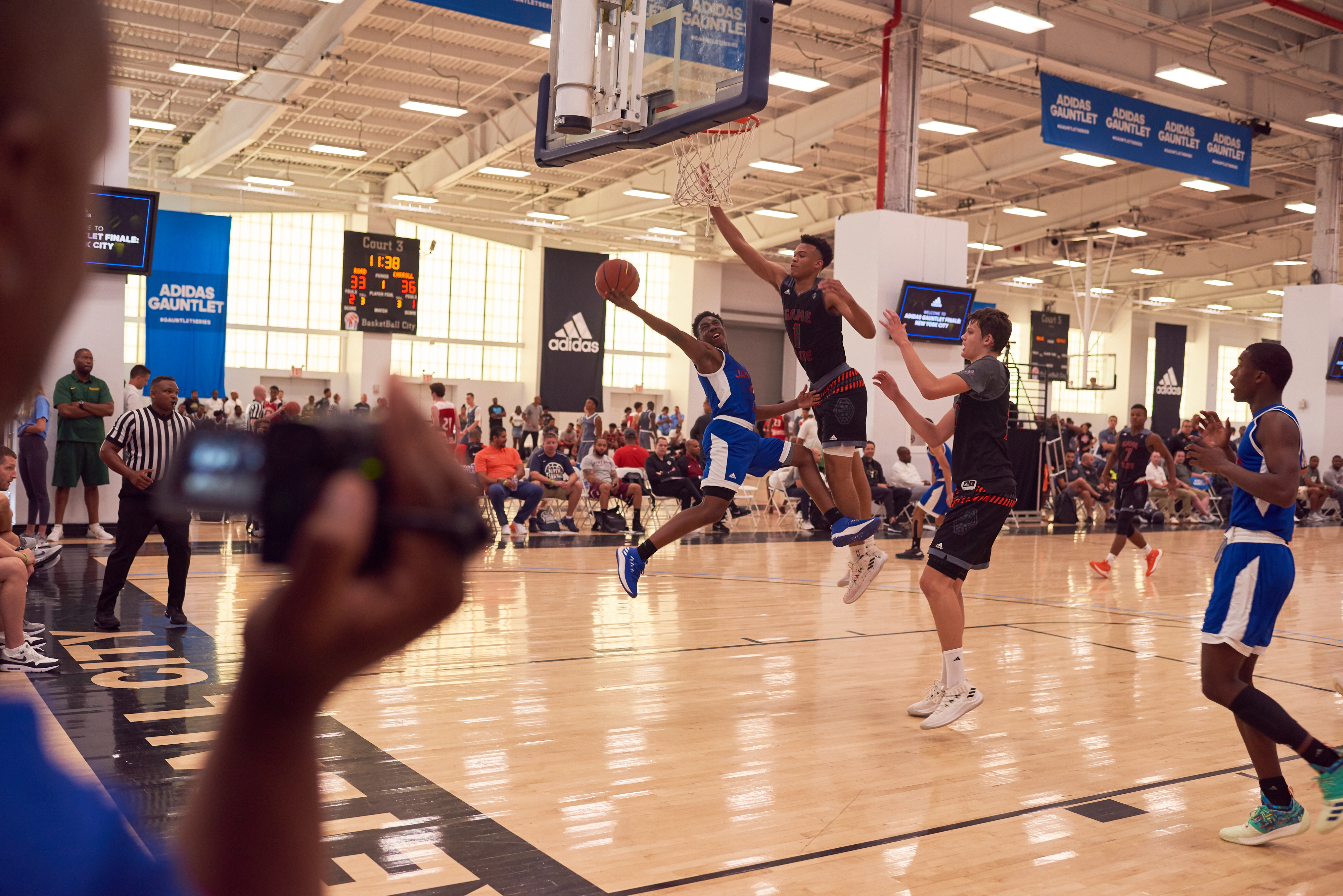 Cameras were out as families and college coaches watched the New York Jayhawks go head to head against Game Elite Gold on July 13. Game Elite Gold went on to win, 54-46. 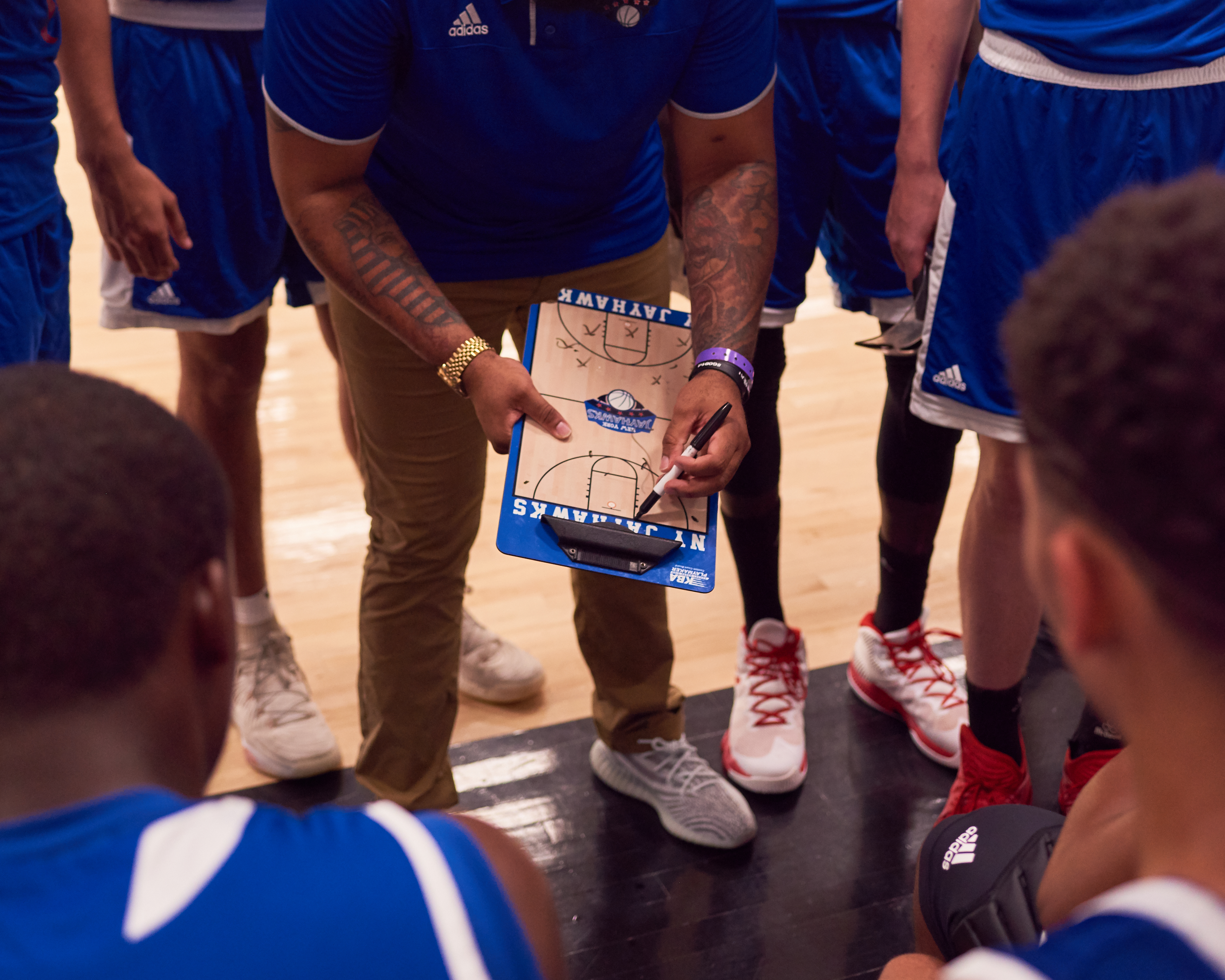 Coach Prophet Kates explains halftime adjustments to the New York Jayhawks during their match against Game Elite Gold on July 13.

No, the circuit wasn’t pretty. There are some grimy AAU coaches out there. Loyalty among coaches, players and parents wears thin quicker than a pair of socks. The aftertaste of commerce is strong on the shoe circuit — big business is afoot.

But the circuit was sexy. It was a James Harden step-back instead of a backdoor cut. A place where your rep meant nothing unless you could back it up under the microscope of ever-present social media and livestreams. And where people were upfront about getting paid off the game.

The NCAA commission criticizes the ungoverned funds flowing from shoe companies to AAU coaches. Coaches used the annual payments, which could reach the low- or mid-six figures, to bring teams in several age groups to at least five national tournaments each spring and summer. That money covered flights, luxury buses, hotels, meals, trainers, practice gyms, video crews, you name it. Some deals were big enough for coaches to pay themselves salaries.

Yes, some of that cash found its way into players’ pockets. Like it always has, whether the source was sneaker companies, high school coaches, professional agents or college boosters. Killing the circuit in favor of NCAA-run elite camps won’t solve that problem.

Killing the circuit also won’t end the sneaker companies’ multimillion-dollar relationships with college basketball teams and coaches — the same teams and coaches that have been accused of orchestrating payments to secure the best players.

And killing the circuit would hamstring a lot of positive AAU coaches like Jay David, executive director of the New York Jayhawks. Sixteen of his players from the high school Class of 2018 signed with college teams, 13 of them Division I. The other three are headed to Division III Wesleyan, Swarthmore and Johns Hopkins. Six of those college-bound players got their first interest from recruiters last July. Such under-the-radar kids likely would have been shut out of an NCAA camp system.

“I get worried about the borderline guys that these shoe company events really serve a purpose for,” David told me in New York. “I get really concerned with taking away opportunity from young men.” Although a new set of July events for borderline kids would probably spring up without the sneaker circuit, Division I opportunities would be more limited than the current wide-open structure of July.

The current free-for-all atmosphere is part of what made July legendary. Anything can and does happen. At the elite level, AAU basketball had a dog-eat-dog mentality that reminded me of bygone playgrounds and asphalt summer leagues, where you had to earn your spot and fight every game to keep it. July was built for college-bound bucket-getters. If you didn’t like the one-on-one, look-at-me style, remember that it helped create today’s ascendant NBA.

I understand why the by-the-book NCAA commission would point the finger at July. I know July didn’t always do the right thing.

But that doesn’t mean there won’t be a hole in the game when it’s gone.