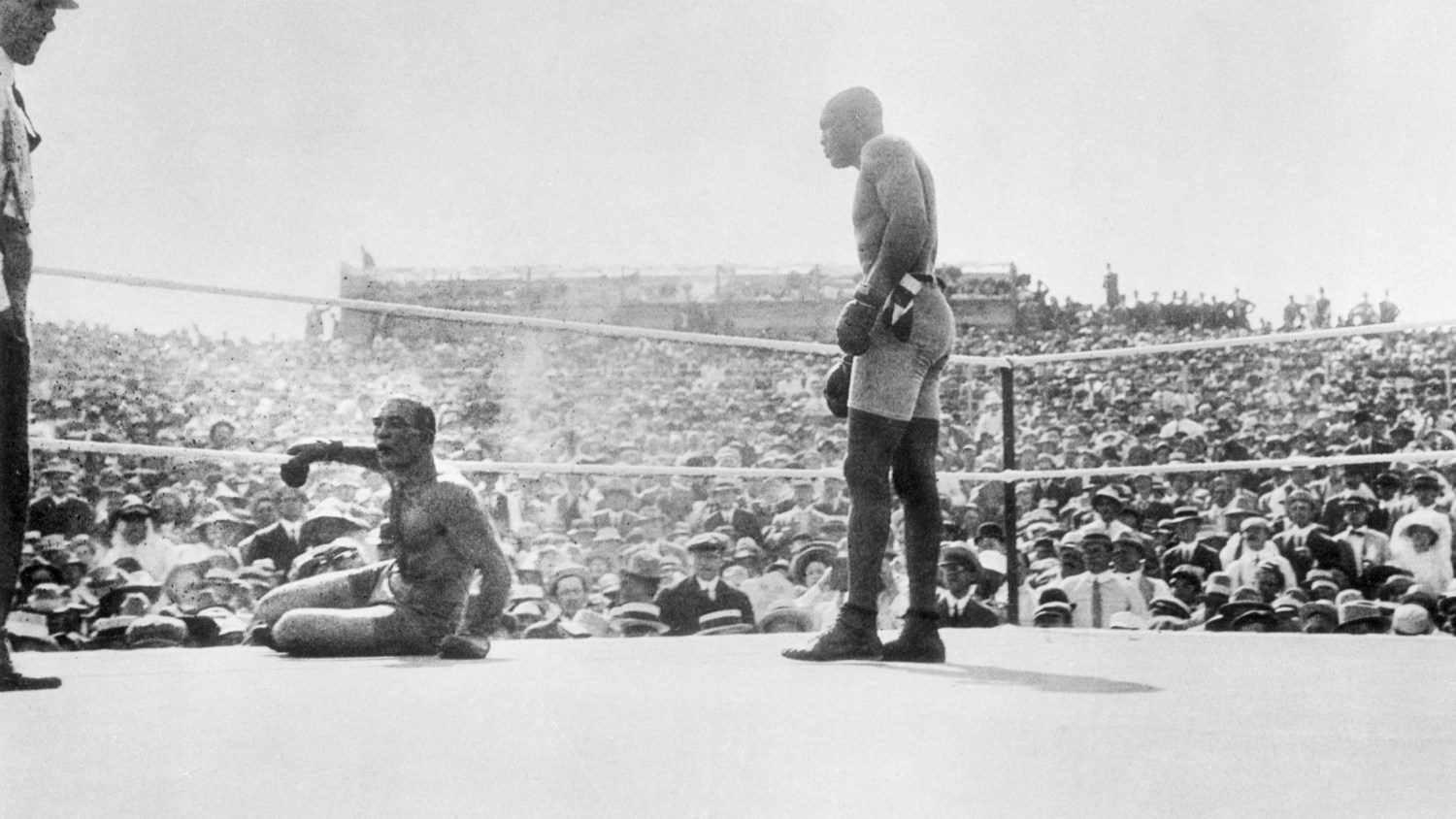 Jack Johnson (R) knocks out Jim Jeffries, who had come out of retirement. The battle, lasting 15 rounds, was staged on July 4, 1910 in Reno, Nevada. Getty Images
Boxing

Jack Johnson’s sex life with white women may still be unforgivable, even by President Barack Obama.

A century ago, outraged by the first black heavyweight champion’s dominance in the ring and flaunting of his white girlfriends outside of it, racist authorities convicted Johnson of transporting women across state lines “for immoral purposes.” Sentenced to the maximum year and a day in federal prison, Johnson fled the country and lived in exile for seven years before returning to serve his time at Leavenworth.

In 2004, a group of people began seeking a posthumous pardon for Johnson. Now, in the dwindling days of his presidency, Obama must decide whether to set the record straight for an athlete who ignored white supremacy’s greatest taboo.

Many predict Johnson’s pardon will have to wait at least another four years.

“I hope not, but I’m afraid so,” Arizona Sen. John McCain, a boxing fan who has long supported the pardon, told The Undefeated.

“I’m very confused by it,” McCain said. “I have not understood, where this is an egregious act of racism, that the president of the United States wouldn’t want to correct history.”

The pardon request originated with filmmaker Ken Burns as he prepared to release his 2004 documentary Unforgivable Blackness: The Rise and Fall of Jack Johnson. Burns gathered McCain and other advocates, ranging from boxer Sugar Ray Leonard to Public Enemy frontman Chuck D, and secured a law firm to submit the required application to the Office of the Pardon Attorney at the Department of Justice.

Burns personally petitioned President George W. Bush, who told him to speak to Karl Rove. “Not gonna do it,” Burns recalled Rove telling him.

He hasn’t gotten that close to Obama. “I had an opportunity earlier this year to address some folks at the Justice Department,” Burns said in an interview. “I thought I saw a twinkle in some eyes and interest and enthusiasm. That would have meant people would have gotten back to me with questions, with some type of response. But so far, I’ve heard nothing back.”

But Obama has focused his clemency efforts on living prisoners sentenced under outdated drug laws that had strict mandatory minimum terms for nonviolent crimes. He has granted clemency to 1,324 people – more than the previous 11 presidents combined – including 395 with life sentences.

Jeffrey Crouch, an American University professor and author of The Presidential Pardon Power, said it was “very unlikely” Obama would pardon Johnson. “If President Obama opens that door, it could very well distract from what he has established as his main focus with the clemency power: commuting the prison sentences of nonviolent drug offenders,” Crouch said.

Posthumous pardons are rare. Every clemency request must be investigated, and the Department of Justice says its “general policy” is not to accept posthumous applications, because its time is better spent on cases that could help the living. Nevertheless, Johnson’s application was accepted for review.

Presidents Bill Clinton and George W. Bush each granted one posthumous pardon. Clinton’s went to Lt. Henry O. Flipper, born into slavery in 1856 and the first black West Point graduate, who was victimized by a racist Army prosecution.

The White House has said it does not comment on specific clemency requests, and has not made any public comment about a Johnson pardon.

“Even with the end of Obama’s presidency coming,” Crouch said, “there is no reason to believe that Obama will change his mind.”

The 6-foot, 200-pound pugilist was no Jackie Robinson, who in 1947 broke baseball’s color line with stoic dignity and forbearance. As heavyweight champ from 1908 to 1915, the most famous black man in America loved fast cars, white women, flashy jewelry and racy nightclubs. He taunted, gloated, and lived by his own rules.

Even many African-Americans frowned on Johnson’s lifestyle, which embodied an “emerging black working-class subculture that embraced conspicuous consumption and outspoken bravado,” wrote Theresa Runstedtler, an American University history professor and author of Jack Johnson, Rebel Sojourner: Boxing in the Shadow of the Global Color Line.

Runstedtler likened this movement to “the hip-hop culture of its day, widely associated with black criminality and black masculine pathology. And, much like hip-hop today, this New Negro subculture was criticized roundly for its lack of respectability.”

After Johnson beat the Canadian fighter Tommy Burns in Australia to capture the heavyweight title, a cry arose for an American “Great White Hope” to restore white supremacy. Former champ Jim Jeffries was coaxed out of retirement to fight Johnson in Reno, Nevada, on July 4, 1910, in the biggest sporting event to that point in American history.

“I should step into the ring again and demonstrate that a white man is king of them all,” Jeffries said.

Johnson pounded Jeffries to the canvas three times in the 14th round, and Jeffries’ corner threw in the towel to avoid a humiliating knockout. Riots immediately erupted across the country. At least 26 people were killed, almost all of them African-American.

In a July 5 editorial that began “A word to the black man,” the Los Angeles Times warned, “Do not point your nose too high. Do not swell your chest too much … Remember you have done nothing at all. You are just the same member of society you were last week.”

The following Christmas Day, suspecting that his white girlfriend Etta Duryea was having an affair, Johnson hospitalized her with a vicious beating. They got married weeks later. In September 1912, Duryea killed herself with a gunshot to the head in the apartment above Johnson’s Chicago nightclub.

Federal prosecutors soon charged Johnson with violating the Mann Act – a new Prohibition-era law aimed at combating prostitution – through his relationship with a white prostitute, Lucille Cameron. Less than three months after Duryea’s suicide, Johnson married Cameron, and the government’s case fell apart. But the government found another white prostitute, Belle Schreiber, who had a sporadic relationship with Johnson. An all-white jury convicted Johnson under the Mann Act in 1913.

Johnson continued to box while in exile, and lost his title in Cuba in 1915. No black man would fight again for the heavyweight belt until Joe Louis, who became champ in 1937. Johnson died in a car accident in 1946, at age 68.

“I think the answer to why Obama doesn’t pardon Johnson lies in the furor over sex trafficking which began with Bush and then Obama’s State Department,” said Mary Frances Berry, a history professor at the University of Pennsylvania and former chair of the U.S. Commission on Civil Rights. (She left the commission years before its vote on Johnson.)

“What does this have to do with Jack Johnson?” Berry said by email. “He is the black pimp, now called gorilla pimp in the anti-trafficking scenario. … He was an enticer and certainly whatever his motives he can’t be a hero.”

In an interview, Runstedtler said Johnson deserves a pardon, but “I don’t know if Obama would want to touch him with a 10-foot pole.”

“I doubt the Obama administration or the Justice Department would say this, but because of his history, the sordidness of it, the ways he’s connected to a more underground culture that was outside the lines of respectability, I think that’s perhaps why they haven’t touched the pardon,” she said. “He’s not an easy figure to narrate into a clean-cut story of racial uplift and respectability. That’s very much the sort of imagery that Obama has banked his whole career on.”

Another question is who would this pardon help? What good would it do today?

“When we pardon someone as famous, some say as notorious as Jack Johnson, we remind ourselves that these are ongoing stories in American history, and we’re obligated to rectify them,” Burns said. “That’s the difference between a civilized and a tribal culture.”

There certainly would be a type of bookend resonance to Obama pardoning Johnson. “This will speak specifically to how we are moving from the dark past we’ve had, with reference to interracial couples, like Obama is a product of, to where we are today, so we could be one people,” said Meeks.

Runstedteler said that a pardon for Johnson could also be seen as a pardon for white America’s racial sins. “In pardoning Jack Johnson, we’re putting away racial injustice in the criminal justice system,” she said. “There is a way in which the pardon could act as pointing toward American exceptionalism, this idea that American democracy always prevails and is colorblind, which of course says much more about white America than it does about Jack Johnson.”

But Burns rejected the idea of a pardon for white America. “We are asking Obama to pardon Jack Johnson to help us learn and help us grow,” he said.

Obama leaves office in less than a month. His focus on freeing prisoners trapped by mass incarceration, which decimated the black community, shows that the specter of Johnson’s injustice remains.

And that some sins may still be too great for us to confront.

“The reason Jack Johnson was so beset by his own country, a country ironically which had only recently reaffirmed that all men were created equal,” wrote W.E.B. DuBois, who co-founded the NAACP while Johnson was the world champion, “was because of his Unforgivable Blackness.”