Will Chris Paul run it back with Phoenix?

With the Suns losing in the Finals, the focus turns to the point guard’s future

MILWAUKEE – Chris Paul understandably had no interest in accepting any moral victories on Tuesday night after his Phoenix Suns fell short in the NBA Finals. Yes, there was a lot to be appreciative about during the 16-year veteran’s first trip to the Finals. But with the Milwaukee Bucks now the 2021 NBA champions, the competitive Paul was not looking for any words of wisdom, respect or hugs.

While there was jubilation and tears of joy in Milwaukee after the Bucks’ 50-year NBA championship drought came to an end, long-suffering Suns fans completed their third trip to the Finals in franchise history and still don’t have a title to show for it.

And what could make the pain for the Suns even more painful is if they lose Paul in the coming months in free agency.

Phoenix has rookie extensions to complete this offseason with budding star center Deandre Ayton and starting forward Mikal Bridges. Backup point guard Cameron Payne will also be a free agent. But the biggest concern in the Valley of the Sun now that the NBA Finals are over is Paul’s future. The 11-time NBA All-Star can become an unrestricted free agent if he declines a $44.2 million player option for next season, and he could also ask for a sign-and-trade.

When asked about his contract after the Finals ended, Paul said: “We just lost a few minutes ago, you know what I mean? Right now we’re going to process this and figure this out. I think everything else will take care of itself.”

Paul, who averaged 16.4 points, 8.9 assists and 4.5 rebounds for the Suns during the 2020-21 season and was an All-Star, has until Aug. 1 to decide whether to opt in and can sign an extension with the Suns once the moratorium is lifted on Aug. 6. The 36-year-old, however, can only extend his contract for two years due to the NBA’s “over 38” rule. 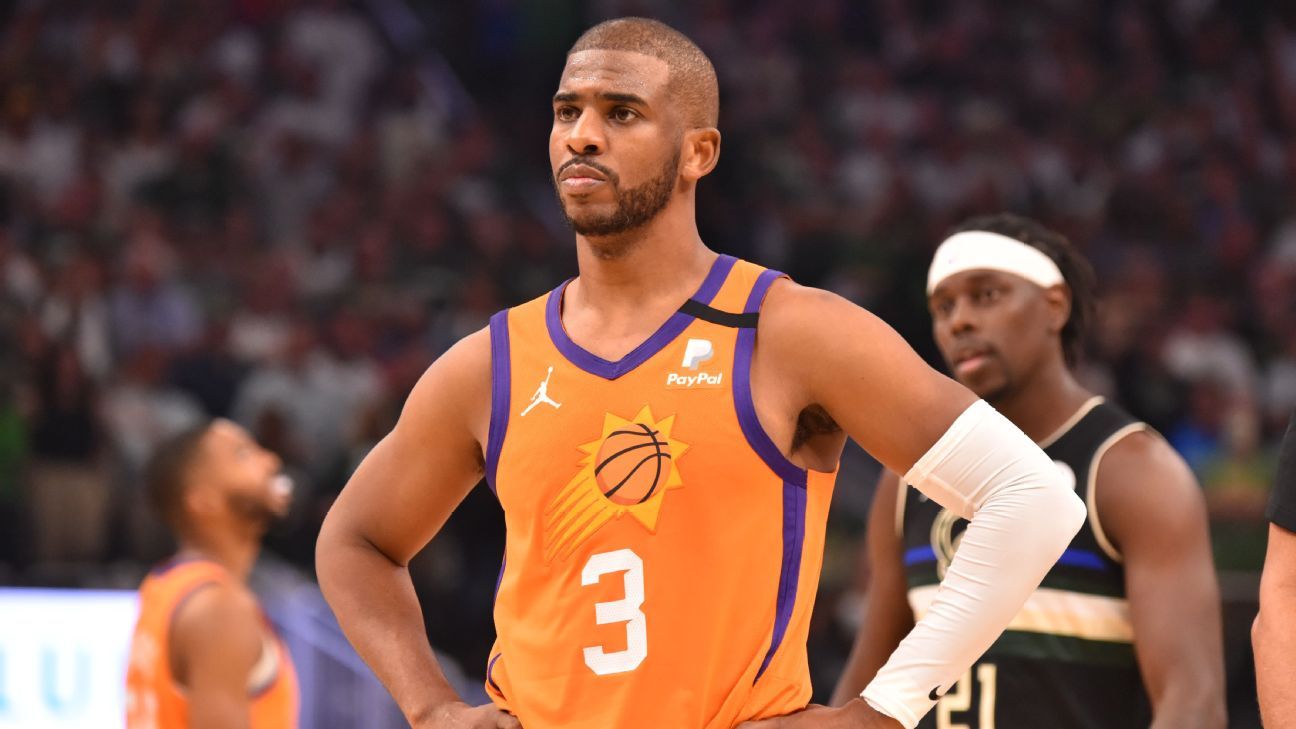 The Suns need Paul and would likely be willing to add to his mammoth salary to keep him. The impact Paul had on the Suns this season was worth every penny and is greater than just his own production on the court. Devin Booker solidified himself as one of the NBA’s elite players while sharing the backcourt with Paul. And Ayton matured with Paul pushing him toward greatness. With Paul back, the Suns would remain a title contender. Booker, Ayton and Bridges are all currently under 25 years old and could continue to grow with Paul.

“ ’C,’ man, he taught everybody a lot,” Ayton said. “But mainly just coming to play, coming to compete and just approaching the game the right way with consistency, approaching it in a way where there ain’t no mishaps. Almost try to be perfect.”

Said Booker: “We supported Chris all the way. He led us this whole entire season and this is our first year together. So, just developing a relationship, developing a trust amongst each other throughout the whole season and for it to fall short like this, it’s tough on all of us.”

While Paul reached his first NBA Finals with the Suns, failing to deliver a championship could open the possibility for him to at least listen to potential scenarios in free agency.

According to sources, LeBron James and the Los Angeles Lakers have been on the hunt for a veteran point guard, and Paul is on the list. There have also been talks about Washington Wizards star Russell Westbrook being a potential candidate to move back home to Los Angeles in a sign-and-trade deal that could include free agent point guard Dennis Schroder, forward Kyle Kuzma and guard Talen Horton-Tucker, sources said.

For Paul to join forces with James for the first time in their careers, it would likely take a sign-and-trade with the Suns. The most the over-the-cap Lakers can offer Paul without a sign-and-trade is a $9.5 million taxpayer midlevel exception. The attraction of chasing his first championship with James, Anthony Davis and the Lakers could be an appealing option for Paul to ponder. Keep in mind that Paul, a former LA Clippers star, still lives in Los Angeles with his wife and two kids.

Paul has earned $259 million in his career. If Paul does opt out, it’s most likely he’ll re-sign with the Suns. But also keep an eye on Paul’s former agent Leon Rose, who is now president of the New York Knicks. Paul is also close to soon-to-be former Suns assistant coach Willie Green, who could certainly use a veteran point guard when he takes over as coach of the New Orleans Pelicans and may at least make an inquiry call, too. If Paul departs from Phoenix, he would be playing for his fifth team since 2017.

Once the dust settles on the disappointment of losing the Finals, Paul will have time to truly reflect on what wearing a Suns uniform has meant to him.

Paul showed his value as one of the elite point guards in the league, and his ability to bring the best out of young stars in Phoenix. What also counts in Phoenix’s favor is Paul has close relationships with Suns general manager James Jones and head coach Monty Williams, who praised the point guard for being one of the NBA’s greatest players with or without a championship.

How much Paul wants to win a championship ring could play a big role in whether he stays or goes. The West will get tougher next season with the Lakers, Clippers and Golden State Warriors all getting healthier. Paul or no Paul, the Suns will be far from NBA Finals favorites. But after Phoenix rose to unexpected heights this season, can anyone count the Suns out if Paul returns?

While it’s already hot in Phoenix due to the Finals loss (and 100-plus degree temperature), what happens with Paul will certainly make the Suns sweat even more.

“It will take a while to process this or whatnot, but it’s the same mentality, get back to work,” Paul said. “I ain’t retiring, if that’s what you’re asking. That’s out. So, back to work.”