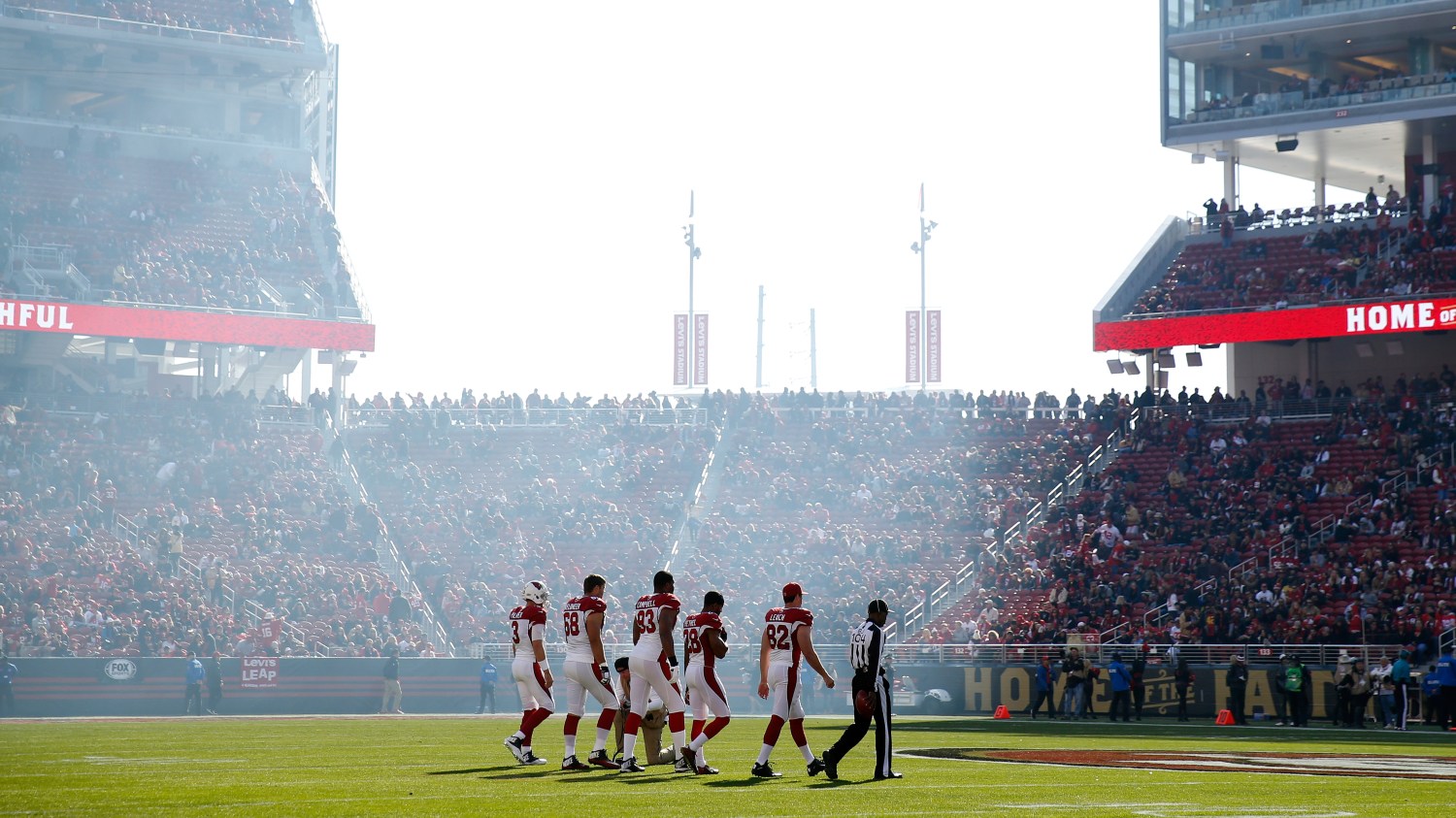 The Arizona Cardinals captains take the field for the coin toss prior to playing the San Francisco 49ers in their NFL game at Levi’s Stadium on November 29, 2015 in Santa Clara, California. Ezra Shaw/Getty Images

Why do so many pros go broke?

Lewis Neal and Russell Davis are generations apart, as are their stories. They don’t know each other but they share a passion other than football. They want their fellow athletes to understand finance so they can protect themselves and their families.

One is a defensive end looking forward to being drafted into the NFL next month. The other is long retired from the NFL, with a Super Bowl ring. One is determined to be the first African-American NFL player to become a billionaire. The other recently retired from his second career as an athletic director in Jackson, Michigan.

Neal, 21, graduated last December from Louisiana State University with a degree in sports administration. He wants to be a role model for African-American athletes in the NFL when it comes to financial literacy and budgeting, just like he was in college. His enthusiasm bubbles over when he talks about his self-taught financial acumen, earning money trading on foreign exchanges and teaching personal finance and investing to his LSU teammates.

“My goal is to inspire other athletes to take finances more seriously, and aim higher than sports,” Neal said. “They need more than one stream of income.

“It has to come from somebody in their shoes. And I feel like that’s me. When they have money and don’t know what to do with it, they get things they never had. And they are not understanding that type of cash flow will not come in when they leave sports.”

Davis, 60, was a running back with the 1979 Super Bowl champion Pittsburgh Steelers. He said he was totally unprepared for the money that came with his athletic success and remembers vividly when he was cut by the Steelers after a five-year career. He had to give up the big house and the cars and figure out how to return to a “normal life.” There was no plan. It just ended. He, too, wants to talk about the importance financial literacy for today’s athletes.

“I never failed at anything before Pittsburgh let me go,” Davis said. “It goes beyond humbling. I had a family, and two young kids. I can’t describe the devastation that occurs in your spirit and your mind.”

There are many stories about professional athletes and their postcareer money problems: Antoine Walker reportedly blew through $108 million; Warren Sapp, $82 million; Vince Young, $25 million. The list goes on. (Walker now does public speaking on financial literacy, and has a book and a documentary on his story.) But most of those stories are about the big-money athletes – not the average players who have much shorter careers.

Sports Illustrated once estimated that 78 percent of NFL players are either bankrupt or under financial stress within two years of retirement and 60 percent of National Basketball Association players are broke within five years of leaving the sport. The average length of a career in professional sports is relatively short: 3.3 years in the NFL; 4.6 years in the NBA; and 5.6 years in MLB.

Andre Collins, executive director of the NFL Players Association (NFLPA) Foundation, said players’ transition to life after football is difficult, “even for the most prepared players who have gotten a solid education. For a young person, it’s tough.” The foundation offers grants, loans and other types of assistance to help with that transition.

“Most players rebound, find gainful employment and are doing well,” Collins said. “But that doesn’t mean we don’t try to educate players about money and how it works.”

Davis did eventually rebound. The third pick in the fourth round in the 1979 NFL draft, he spent his first year on injured reserve. His first contract was for three years with a $32,000 base salary and a $20,000 signing bonus in the first year. He said he hooked up with an agent who took advantage of athletes, so he was “woefully underpaid.” Still, it was pretty good money back then, when teachers were earning less than $15,000.” He earned a $90,000 base salary in his final year.

His first purchase as a rookie was a luxury car. “Knowing what I know now, that should not have been my first expense,” he said. “Should it have been a nice car that says I am somebody, or should I make an investment that will help me beyond my playing years? If you get a nice car, then you need a three-car garage and the trap continues. In my day Mr. T was big, so you had to have all the gold chains. They are still trapping kids with bling-bling.”

When he was cut by the Steelers, he was unprepared, financially and emotionally. “When I was drafted, I had not finished school,” he said. “I didn’t graduate, and I didn’t care, because, baby, I was going to play ball, and I was going to play with the best team in the country. Everybody knows I’m good and I will play forever. I learned quickly that wouldn’t be the case.

“I was mortified, out looking for work that would keep me in a lifestyle in which I was accustomed,” he said. He had saved nothing, and eventually had to sell the house at a loss and the cars. “We [players] had no education back then,” he said. “We were just exposed to the wolves.”

He credits Bo Schembechler, his coach at Michigan, with helping him turn things around. He told Shembechler that he wanted to coach: “He said, ‘Russell, you didn’t finish school.’ He said, ‘Let’s get you back in school,’ and put me in touch with a school counselor. He got me university housing and some scholarship money.

“It was the hardest thing because now I’m dealing with emotion,” he said. “I’m mopping floors at a hospital and people are still recognizing me. They say, ‘Man, aren’t you Russell Davis?’ And I say no, because I am ashamed.”

He said he fell prey to people who didn’t have his best interests at heart. “I’m not bitter, but I felt taken advantage of,” he said.

Davis said the problems with young players persist today. Even though they are making a lot more money, nothing has changed about their attitude and education about money. “Guys are still keeping up with the Joneses. That’s one of the traps I fell into. I’m making $90,000 and Franco Harris was making $450,000, and I’m eating at the same restaurants. I couldn’t afford it.”

His advice: “Get educated in every aspect of handling your money. At some point you have to trust somebody, but do your homework. Cover your basics. The athletic piece takes care of itself. You got there because of your abilities. Now you have to put in work in the other areas – your family and your finances.”

Then there’s Neal, the Wilson, North Carolina, native who grew up wanting to be an investor.

“I wanted to understand how to make money work,” he said. “I was always the kind of person to take finance seriously growing up. I had to take care of what I had, because I didn’t have much.”

His mom works at a bank. “She is really good with finances. I guess that being in a family that takes it seriously, it was natural for me to take finance seriously.”

His financial education started in high school. Then he found financial guru Dave Ramsey and started reading his books. “That’s when I got introduced to managing my money and doing things correctly. I started understanding 401(k)s and all those things that help you.”

Between football and learning about investing, he had little time for anything else. “You have to sacrifice,” he said. “Learning how to do what I do doesn’t happen overnight. The times when I could have been watching TV, that’s when I was learning. When I had extra time during the day, I was taking the time to learn more about finances. I had to manage my time.”

He trades regularly, mostly on foreign exchanges – stocks, commodities and futures. “When I needed to make some extra money, I’d go to the market and get it,” he said. “I’m successful, but I’m not a full-time trader. I can go to any market and do it, but I prefer the foreign exchanges.”

When he gets to the NFL, his plan is to invest the contact money and live off the returns. He also has developed several apps.

He readily shared his financial knowledge with his LSU teammates. “Football doesn’t last forever. Ten years after football, you have to be ready. You want to walk into your next stage if you are already set. You will be ready, instead of saying, now what?

His rule No. 1 for pro players: “You have to look at your bank account every day. Know what’s going in and what’s coming out. That’s simple stuff. It’s not hard. But it’s got to be taught and molded into the mind from somebody who relates to him.”