When it was announced last month that Saturday Night Live had added its first Latina cast member — Melissa Villaseñor — after 42 years on air, it was met with high praise, and a question: Why did it take so long?

But now fans are asking a different question altogether: Is Villaseñor a racist?

Thanks to an environmental racism writer named Aura Bogado, it was noticed four days ago that Villaseñor had deleted some 2,000-plus tweets from her account.

I'm excited about the first latina on SNL but not gonna lie: deleting 2K tweets in 5 days is… odd. pic.twitter.com/p7D5Alm6qE

But even with so many tweets discarded, many vile, racist tweets over the years were still found on Villaseñor’s account. After Bogado began pointing out many of these, Villaseñor deleted even more of them. Luckily, there are screenshots. Here’s a look at some of what she didn’t want the world to see: 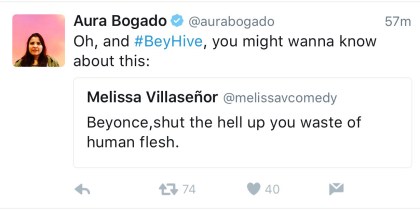 wow. Soooo if she didn't delete those tweets… Imagine what she DID delete pic.twitter.com/pW72NJASZw

What a disappointment. I was so excited about @melissavcomedy, but it turns out the anti-blackness (and then some) strikes again.

Yasiel Puig at the wall. Vin Scully on the call. It doesn't get much better than this: https://t.co/UPBJ5bXGT4

My professor (who is white) sent out this email this morning…I really had to stop and think for a minute. #NCAT20 pic.twitter.com/wDD4ZW16Rk

The ENTIRE @IndianaFever WNBA team kneeled during the national anthem tonight. Power to the people! pic.twitter.com/IgapJbT0ID

Cleveland Cavaliers guard Iman Shumpert posted an Instagram photo of his daughter Junie on Wednesday, and pledged to donate money for each steal next season instead of kneeling for the anthem.

The beef between rappers The Game and Meek Mill continues — because, of course.

Meet Gunner Stahl, the photographer behind some of your favorite rap photos.

Here’s the homie Chance The Rapper talking about Drake, Kanye West and meeting Beyoncé at the MTV Video Music Awards.

Every morning we’ll hit you here with the best of what we saw on social media the previous night. Why? Why not?

1. COULD CAUSE A COLD FRONT

When your son buys you grillz for your 45th birthday:) pic.twitter.com/Crysr6T3nf

When Shawty Had The Crowd Turnt At The Bet Awards With The Umbrella And Rain Boots #RipShawtyLo pic.twitter.com/x2WS0SAhvf

Bankhead, must be two sides! pic.twitter.com/yg9vZKo9k3

THE BEST 2K COVER OF ALL TIME pic.twitter.com/JGj4bWhQFW

This Story Tagged: Marshawn Lynch What Had Happened Was Yasiel Puig Melissa Villaseñor