When Phoenix Suns head coach Monty Williams arrived back home on June 13 after advancing to the Western Conference finals, he was taken aback. Congratulatory signs adorned the gate of the community and the road leading to his house. And when his garage door opened, there was one last surprise that warmed his heart.

“My 10-year-old boy [Micah] was already asleep, but he told my wife to ‘Please wake me up when Dad gets home.’ I opened up the garage and he was just sitting there waiting on me,” Williams told The Undefeated in a phone interview on Monday. “That was the coolest moment for me, was my 10-year-old sitting up waiting for his dad because he was so excited.”

Williams, 49, felt similar excitement seeing his Suns players celebrating after they swept the Denver Nuggets with a 125-118 road victory in Game 4.

Chris Paul and Williams shared a warm hug before the point guard went into the Ball Arena stands to embrace his parents and brother, C.J. Devin Booker also celebrated with his family nearby. Deandre Ayton, Torrey Craig and Cameron Payne danced in the locker room. And hours later, the team celebrated with hundreds of fans who had waited at Sky Harbor Airport for their return. 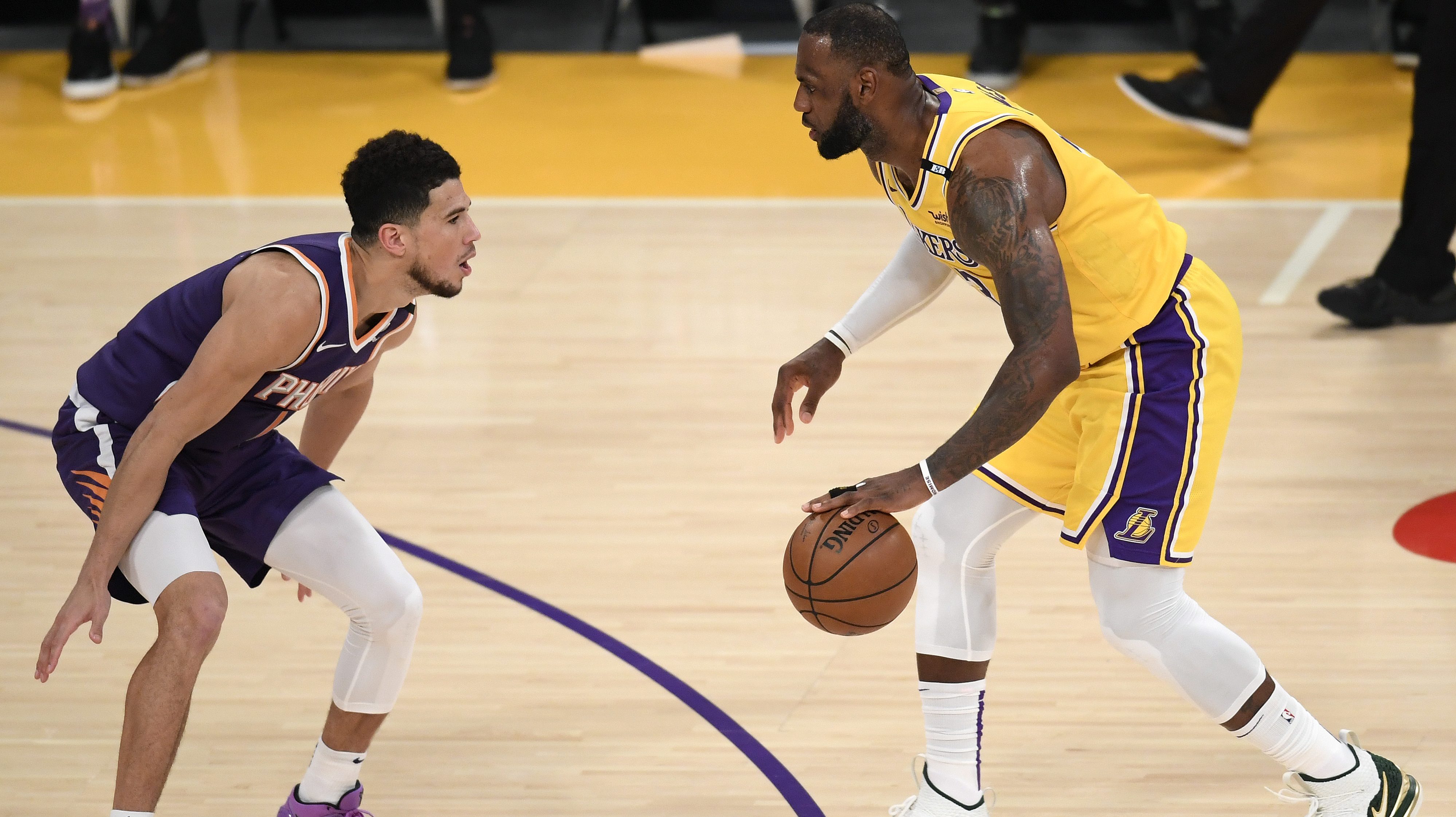 Devin Booker took his dad’s advice: ‘Show everybody you one of these stars’Read now

While the Suns have aspirations of winning the franchise’s first championship after falling short in their only two appearances in 1976 and 1993, Williams believes it’s important to enjoy these moments, which include defeating the reigning champion Los Angeles Lakers in the first round.

“When stuff happens, we want to celebrate it and enjoy it for what it is and then turn the page and move forward,” Williams said. “I don’t think there is anything wrong with it. When Devin got the NBA Cares award, we celebrated as a team. No one saw it, but we did it.

“If you’ve been around our team and been around Jae [Crowder], Chris, Book and Mikal [Bridges], those guys are competitive. They’re not satisfied with anything. It’s the NBA thing to act like nothing happened. And you kind of get caught up in that. ‘Oh, it’s no big deal.’ Some people choose to do it that way, but everybody wants to win a title. But along the way, you got to enjoy those moments.”

Considering the challenges that Williams has overcome in his life, Paul understands why his coach relishes every chapter.

“ ‘Mont’ has been through things in his life that a lot of people don’t necessarily come back from,” said Paul, who joined the Suns in a trade before this season and was coached by Williams with the New Orleans Hornets. “The mental stamina. Who he is as a person. Basketball aside, he means so much to me and my family. To be on this journey with him and to see it pay off is nice.

“We’re a lot alike. We stay locked in. I don’t feel good until the buzzer sounds. ‘Mont’ is the same way. When the series is over and the game is over, it is nice to share in these moments.”

Williams was a journeyman NBA player who overcame a heart condition in college to play 456 games with the New York Knicks, San Antonio Spurs, Nuggets, Orlando Magic and Philadelphia 76ers from 1994 to 2003. He began coaching as an intern with the Spurs during their 2005 championship season and was an assistant with the Portland Trail Blazers for five seasons before becoming head coach of the Hornets in 2010.

After his exit from New Orleans in 2015, Williams went on to become the associate head coach of the Oklahoma City Thunder. During this time, he endured personal tragedy when his first wife, Ingrid, died from injuries sustained in a car crash in Oklahoma City on Feb. 10, 2016. Williams, who has five children and has since remarried to Lisa Keeth, took time away from the game following that season.

In 2018, he joined Brett Brown’s staff in Philadelphia before taking the Suns job a year later. He took over a team that had a 19-63 record and now has Phoenix in the Western Conference finals for the first time since 2010.

“I am not one of the guys anyone picked to be in this spot,” Williams said. “I’m not a point guard. I wasn’t highly thought of as a basketball mind when I played. At least not publicly. I always had them tell me behind the scenes. So, to be in this position is only by the grace of God. I want to do everything I can to help our team. But I know I wasn’t the second or third guy picked. I am just really grateful.”

During the regular season, Williams led the team to the NBA’s second-best record at 51-21 and its first Pacific Division title since 2007. The Suns also had the league’s best road record (24-12) and earned their fifth-best winning percentage (.708) in franchise history. NBA coaches honored Williams with the 2021 Michael H. Goldberg NBCA Coach of the Year Award. 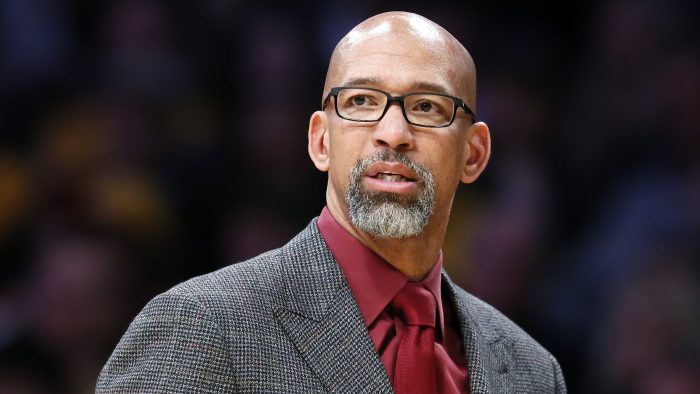 Monty Williams: ‘We have a lot to gain from being in Orlando’Read now

However, Williams fell just short of winning the 2021 NBA Coach of the Year Award, which is voted on by the media. He lost despite having more first-place votes than the winner, Knicks head coach Tom Thibodeau. Williams had 45 first-place votes while Thibodeau had 43, but the latter had 10 more second-place votes (42) than Williams (32).

Williams learned about the result while watching the announcement on TNT from his office at the Talking Stick Resort Arena. He said Suns coaches and players were upset and Booker called him to tell him he was “robbed.”

Williams was disappointed, too, but said he saw the result as a “teaching moment.”

“There are times in life where you get times to display humility when things don’t go your way,” Williams said. “For me, it started with my kids. They were so disappointed. It started with social media. They were upset. It gave me the opportunity to show you can be still gracious when things don’t go your way. … I was actually not happy in a sense that I am competitive and I wanted to win. But I was happy in the sense of teaching my kids that life doesn’t always go your way but you can still be respectful and still have humility in those times and happy for the person who won. That’s just life.

“The other thing that happened is I was watching it and I had the volume down when they announced ‘Thibs’ won it on TNT. … But then in the hallway I can hear the players and some of the staff and how ticked off they were. It made me realize how much they cared about me.”

Williams’ first two playoff appearances as a head coach resulted in first-round losses with the Hornets-Pelicans in 2011 and 2015. Before this postseason, he spoke to Spurs head coach Gregg Popovich, a five-time NBA champion, about the mental approach needed with a team expecting to make a long playoff run. Williams said that conversation calmed his nerves.

“He was genuine, ‘Pop.’ He knows the nerves and all the genuine things that coaches go through,” Williams said. “I was feeling like I needed to, ‘Do, do, do.’ He just basically told me to keep it simple, love them up and this is the time of the year where it should be fun. It really took a lot of pressure off me. It helped me so much to hear that from someone who has been such a big part of my life and growth.”

The Suns now await the winner of the Utah Jazz-LA Clippers series and could get more than a week off if that series goes seven games. The rest could be valuable for the 36-year-old Paul, who suffered a right shoulder injury in Game 1 against the Lakers.

Williams has talked to Suns assistant Willie Green (an assistant coach with the Golden State Warriors during two recent titles) and Suns general manager and three-time NBA champion James Jones about how to best use the layoff. He says the Suns will have a “light day” when they resume practice on Tuesday to provide rest while keeping the players sharp.

Williams hopes that more celebration is on the horizon for the Suns. He is also humbled and appreciative to be in this position to potentially lead the franchise to history.

“All of our young guys want more,” Williams said. “That’s pretty evident. This team is so competitive. They don’t want to stop playing.

“I’m just grateful to be on the ride.”