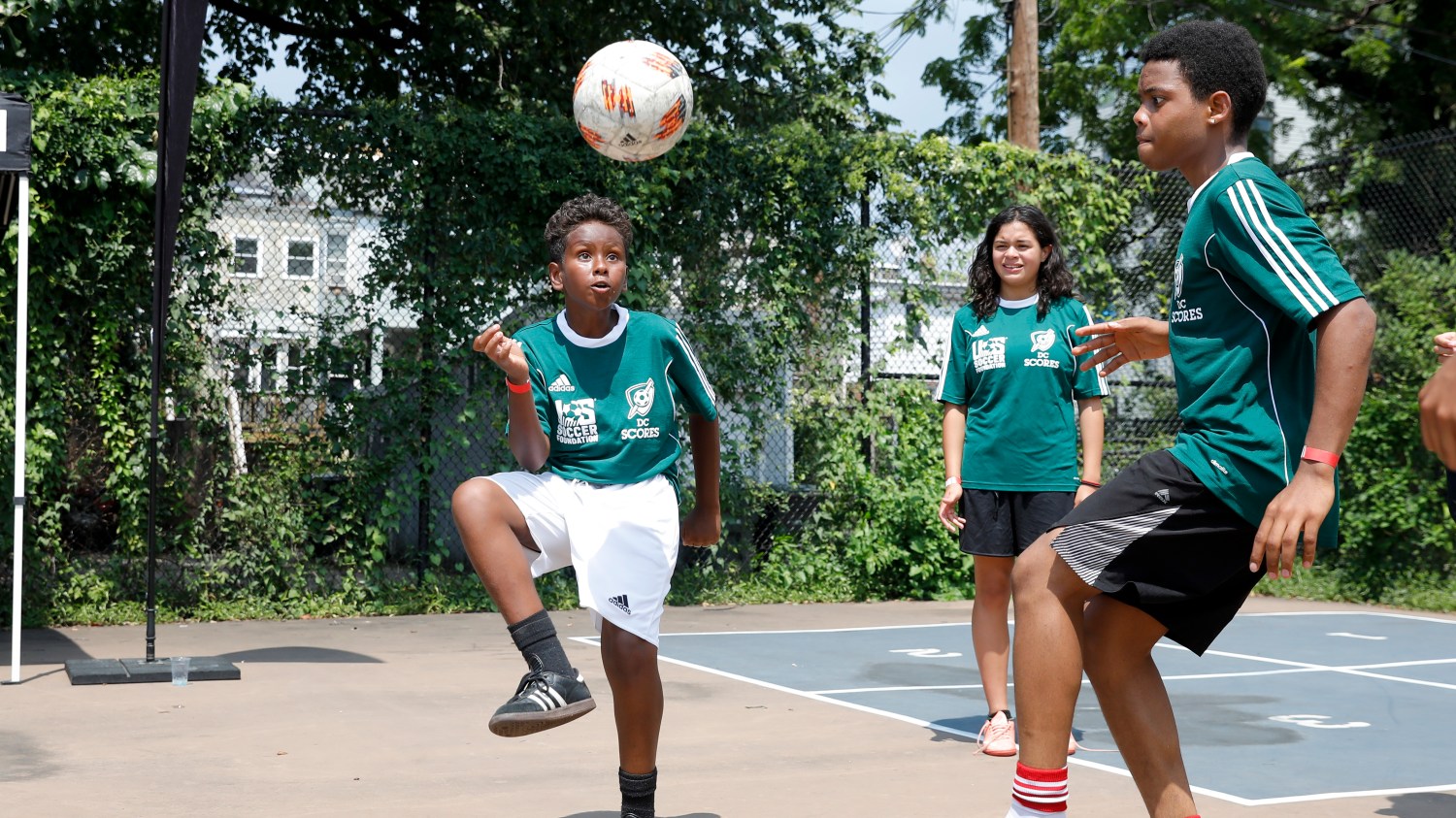 Nathaniel Wendwesen, 12, kicks the ball around before the unveiling ceremony of the new soccer mini-pitch at the Petworth Recreation Center in Washington, D.C. on Aug. 6. Ting Shen for The Undefeated
Soccer

It didn’t seem fair. Ten-year-old Chris Chicas, one of the smallest players on this concrete pitch, was made to play goalkeeper in a 6 vs. 6 pickup game that featured teenagers double his size. But Chris hardly cared. With his hair pulled into a bun with a yellow rubber band and sleeves rolled up to his shoulders, Chris welcomed being in the crosshairs, his body language exuding a confidence that told everyone that he belonged.

“I’m a dribbler,” said Chris. “My favorite player is [Argentina national team star] Paulo Dybala. He’s a dribbler like me and he’s fast like me.”

Chris and his 13-year-old brother Axel were part of a small group of soccer players from Washington, D.C., who were at the opening of a new mini-pitch at the Petworth Recreation Center. The park was buzzing despite the unforgiving summer humidity. (The free ice cream might have had something to do with that.)

“I think it’s really nice because mostly people that live near Petworth have to drive either 20 to 30 minutes all the way to a field so they can play,” said Chris, who lives in nearby Fort Stevens, about 10 minutes from the Petworth Recreation Center.

The pitch opening was attended by youth soccer players such as Chris and Axel, a defensive midfielder on his middle school team, who are members of DC SCORES, a local philanthropic group that organizes neighborhood teams and runs Soccer for Success, the U.S. Soccer Foundation’s after-school soccer program.

The 50-foot-by-100-foot playing surface is part of a national effort by the U.S. Soccer Foundation to impact the lives of young people through participation in the sport. “This is how the best basketball players [in this country] became the best basketball players,” said Dave Johnson, the play-by-play voice for D.C. United since the team and Major League Soccer began play in 1996. “They had safe and convenient places to play. You look at the world over, and [soccer] has always been considered the people’s game. Some of the great Brazilian players didn’t come from advantaged backgrounds. That’s why a place like this is great — where you just come play, you don’t get overcoached, there’s no overthought. It’s ‘Be creative … try that move.’ ”

Free to the public, the new mini-pitch is part of the U.S. Soccer Foundation’s It’s Everyone’s Game program to ensure that children in underserved communities can enjoy the game.

“In my mind, I have no doubt that one day there’ll be a kid playing at a high level who will say, ‘I got my start playing in the neighborhood Soccer for Success Program at my school,’ ” said Ed Foster-Simeon, president and CEO of the U.S. Soccer Foundation.

“That will have been their introduction to the game and the gateway to their passion for play, and that’s a great thing. I think that will happen. I also think as Major League Soccer continues to grow in its presence and the quality of that league, and as the paychecks in that league continue to grow, young people can begin to see pathways for their talent, where they can take their talent to a higher level and be able to participate.”

The foundation’s goal, Foster-Simeon said, is to engage 1 million children annually in Soccer for Success by 2026 and build 1,000 new safe places to play at a cost of $65,000 per pitch.

A former newspaper editor whose passion for soccer started three decades ago when he signed up his 4-year-old to play, Foster-Simeon said making the game available to the inner city will build affinity that could ultimately affect the game even as high as the national team level.

“That doesn’t mean that every kid is going to play soccer, just like every kid doesn’t play baseball, but they get a chance to sample and experience [the game] and make a decision for themselves,” said Foster-Simeon, who said 34 percent of participants in the program are African-American, 50 percent Latino, 7 percent Caucasian, 6 percent other or multi-ethnic and 3 percent Asian.

“Now when my son was 4, we took him to the soccer field and I didn’t know anything about soccer, but when we put him out there, he seemed to know what the heck he was doing — running up and down and having a hell of a good time doing it. And to me, there’s lots of kids who just never even got a chance to even try, and so that’s what we do is we give them an opportunity to play in a fun environment; small-sided games to develop a love and fun of playing, and then see where it goes from there.”

While soccer is a growing sport in America — popularity has tripled in the last decade — it still ranks fourth among the major sports, according to a recent Gallup poll. And, while “the beautiful game” polled ahead of ice hockey for the first time since 2013, until boys and girls in the ’hood play the game regularly, bringing their rhythm and culture with them, soccer will remain fourth for a long time.

It’s still hard for some to fathom that a country of 325.7 million people and endless resources can’t be better at the sport and consistently good enough to qualify for the World Cup. It’s not like American kids aren’t playing. As of 2006, the U.S. was the No. 1 country in the world for participation in youth soccer, with 3.9 million players (2.3 million boys and 1.6 million girls).

“As Major League Soccer continues to grow, young people can begin to see pathways for their talent, where they can take their talent to a higher level and be able to participate.” – Ed Foster-Simeon, president and CEO of the U.S. Soccer Foundation

To be clear, the pitch initiative isn’t a feeder system for the U.S. national teams.

“That’s not on my agenda,” Foster-Simeon said bluntly. “But I’m about as avid a fan as anyone, and I have no doubt that the more children you get playing and the more opportunities you create for children who might have opted for other sports in the past, like basketball or football, and if you get those children opting for soccer because they’ve been exposed to it and they’ve had an opportunity to enjoy and love it, some of those kids are going to be really good.”

The biggest takeaway for Odoi-Atsem as an honorary coach at the pitch unveiling was the chance for kids to be introduced to the game in a free-play environment that doesn’t come with soccer’s “pay to play” model, where the costs for travel soccer run anywhere from $500 to $3,000 a year.

“These kids, giving them an opportunity like this, to come to a place like this, day or night, with the lighting and stuff, is very good,” said Odoi-Atsem, 23. “It’s giving them the access. … I had to travel to Bethesda to play on a decent team, with decent coaching, and decent fields. Putting this somewhere right smack in the middle of their neighborhood really gives them the opportunity to work on their skills and go out with friends and play. And, if they want to stay with the sport, they have that option.”

Twelve-year-old Fatou Gaye is torn. She likes soccer, but loves basketball. Gaye, along with her brother, Amat, and mother, Kadidiatou, came to America in 2014 from Mali in West Africa. Tall, with an athletic build, Fatou has been playing soccer since the fourth grade and is now a defender on her middle school team. The Gaye kids live about 10 minutes from the new Petworth pitch — which, luckily for Fatou, also has an adjacent basketball court.

“With this soccer pitch, kids can kind of just click with each other and not get ourselves in trouble. We can, like, change the perspective people have on us,” Fatou said. “I can come here and play soccer and basketball. But I think I want to play basketball in college because I’ve met a lot of basketball players who kind of inspire me to do my best. As for university, I think I would want to get a scholarship for basketball, and it will probably be at Georgetown or UCLA, and study technology or science because I’m really into technology.”

Fatou’s brother, Amat, 13, is already well over 6 feet tall and plays center-back on his middle school team. Now, he can walk to the Petworth Recreation Center to work on his touches. “I like the game a lot,” Amat said, “but I like to take it seriously because I want to see where I could go with it. Playing at this new pitch just means having fun. I mean, when I see something like this, it’s just more of a program for kids, and for adults, to have fun and just feel loved from the community.”

Two more pitches are planned for September in Seattle, and 10 additional ones, in partnership with Target, are slated for the fall.

“In New York City, we did our first big public-private partnership, which was announced 18 months to two years ago, in which we committed to building 50 mini-pitches in New York City, 10 in each borough over five years,” said Foster-Simeon, a Brooklyn native. “We are working on our second set of 10 right now, and that should be completed this fall, and so we’re really driving that forward. We will engage over 10,000 kids in New York City alone, and that number is just rapidly growing as well. And again, these are children in neighborhoods and communities that have not naturally had access to opportunities to play.”