Thomas is hoping his phone rings again, as he is gladly willing to talk about Baton Rouge being submerged in water by a recent tragic flood. But the ex-Louisiana State University basketball star says the phone calls he is getting now are more of the plea-for-help nature than how can we help get the word out.

“Ain’t nobody talking about it. You got 110,000 people homeless, but ain’t nobody talking about it because it ain’t no god damn controversy,” Thomas told The Undefeated. “This isn’t a black and white thing. ‘Why help them? We don’t want no attention on that. That ain’t enough controversy. They are bringing themselves together. We’re not going to help you come together.’

“When Alton Sterling got killed, I had everyone mediawise calling me asking me what was going on down here and wanting me to talk. That’s controversy. That’s a big story, OK. But f—-, help these people out. This should be a big story. [People] are riding down major highways sitting on boats.”

It all began Aug. 11 when Thomas’ hometown of Baton Rouge and parts of southern Louisiana were submerged by a vicious rainstorm that dumped three times more rain than Hurricane Katrina did. Some cities were hit with more than two feet of water in 48 hours. Despite being 60 feet above sea level, the former post-Hurricane Katrina safe haven of Baton Rouge has suffered 13 deaths and more than 40,000 damaged homes due to the flood.

The Red Cross called the Louisiana flooding “the worst natural disaster to strike the United States since Superstorm Sandy” in a statement. About a third of the state is now a national disaster. Louisiana Gov. John Bel Edwards has said more than 100,000 homes were affected. 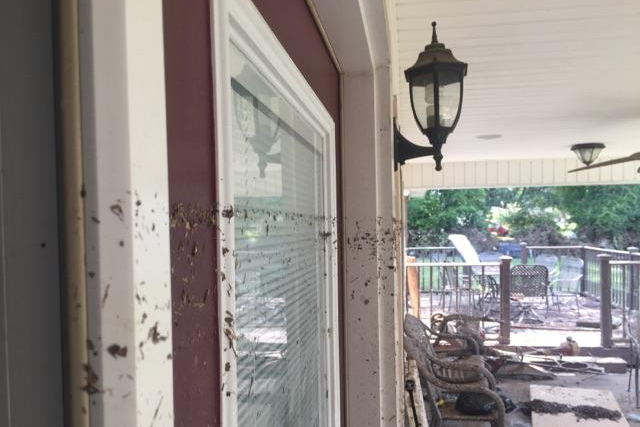 “I walk to my auntie’s house and I am 6-foot-10 and the water line is three inches taller than me,” Thomas said. “You walk through neighborhoods and everybody’s s— is on the street, everything. Houses gutted and busted open.

Thomas yearns for 2017, when Baton Rouge could get a fresh start after Sterling’s death, the killing of the three police officers and now the flooding. He called 2016 “the worst year in the history of Baton Rouge.”

Thomas said that there is no secret that Baton Rouge has some serious race issues that were made public nationally this year. But if there is a silver lining to these floods, it’s that the people of Baton Rouge have shown a love for mankind in this time of need. He said blacks are helping whites, and whites are helping blacks without thinking twice about it.

“This is the most peace my city has seen in my 30 years,” Thomas, 30, said. “Without thinking, a man from Glen Oaks in Baton Rouge with 10 tattoos on his face with gold teeth, dreadlocks and he never wears his pants on his waist — not saying that means anything about his character — but watch this, when he goes off his boat and is jumping in the water, saving old white people without thinking twice … When you got rednecks with Confederate flags on their boats, but they are diving in the water saving black folks without thinking about it …

“You have a Confederate flag on your boat and you’re saving black folks? It took all of this to show that you are human. As f—– up as things are, it could go good if we keep it up.”

The Federal Emergency Management Agency (FEMA) has been approved for more than $132 million in grants for temporary rental assistance, home repairs and other disaster response aid. According to Politico.com, FEMA will give about $33,000 in aid per person, although the average is usually much less at $8,000 for many people without flood insurance. Thomas said he has given out about $25,000 out of his own pocket to help people in need in Baton Rouge. 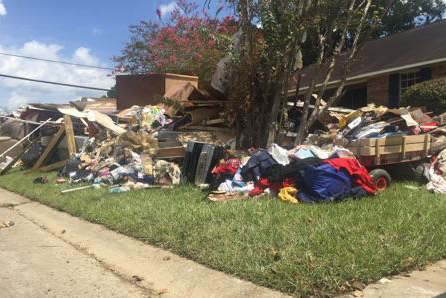 Thomas is hoping to receive donations to aid flood victims in the Baton Rouge area through his Just Show Up Foundation. He also recommends such charities as the Baton Rouge It Takes A Village and the North Baton Rouge Disaster Relief Fund.

“People are hitting me up asking how they can help,” Thomas said. “The only way really to help is money. I am using my foundation for that. I am out here doing stuff for the disaster relief helping people out. Do whatever you can. It’s bananas out here.”

Thomas played in 402 NBA games over eight seasons after being selected fourth overall by the Chicago Bulls in the 2006 NBA draft. During his most notable NBA season, he averaged a well-rounded 10.8 points, 6.4 rebounds, 1.9 blocks and 1.2 steals during the 2008-09 campaign. After missing a season, the power forward made his final NBA appearance in two games for the Memphis Grizzlies during the 2014-15 season. In what appears to have been his last season of professional basketball, Thomas played in Germany for Eisbären Bremerhaven last season.

He is currently a co-owner of the Everything Philly sandwich shop near Louisiana State University. He says his body feels very good and he still plays basketball regularly. But with Baton Rouge in need of help, it appears his pro hoop days are now over and he is focused on helping the needy back home.

“If something changes, it changes. But right now I don’t have any expectations,” Thomas said. “Realistically, I can’t say I am ready to hoop and I am going to have teams knocking at my door. I ain’t no fool. I am living life. I got a lot of purpose helping people. Apparently, I am doing what a lot of people work their lives to do, and that’s find their purpose.”