Town business: Steph Curry and Warriors could be in for a long season in ‘The City’

SAN FRANCISCO – Stephen Curry is still getting used to his drive to the new Chase Center in San Francisco after driving to Oracle Arena for the last 10 years in East Oakland. Although the clock has run out for the Golden State Warriors in “The Town,” Curry can’t help but peek over from time to time on his way to work in “The City.”

“Driving up, sometimes you can see across the Bay. I blow a little kiss and give a little shout-out,” Curry told The Undefeated.

The Warriors played at one of the loudest and most intimidating venues in sports for the last 47 seasons in Oakland. Yes, Oracle Arena was old and rundown, but it was beloved like Wrigley Field and Fenway Park. Meanwhile, the biggest indoor venue in the famous city of San Francisco was the Bill Graham Civic Auditorium, which holds 8,500 people. Bill Graham Auditorium was once the San Francisco Civic Auditorium, where the Warriors played their last regular-season game in San Francisco against the Buffalo Braves on Jan. 29, 1971.

The Braves are now the LA Clippers, who happened to ruin the Warriors’ opening night by routing the Western Conference champs 141-122 in their new $2 billion arena on Thursday.

The 18,064-seat Mission Bay neighborhood venue may have more bells and whistles than any arena in the world. The outside plaza has a 74-foot by 42-foot HD screen for fans to watch games. A 5.5-acre park across the street and numerous restaurants are coming soon. The LED scoreboard is the largest in the NBA at 9,669 square feet. There are 32 courtside suites, 44 club-level suites and 60 four-person suites on the top level with a lot of unique basketball art. There is even a bicycle storage center.

The Warriors’ new circular locker room has a television and wireless charger in every stall. The practice facility in the arena has two full courts and a state-of-the-art weight room. The new visiting team’s locker room also has a players-only room, coaches room, head coach office, executive’s office and dining room. One Warriors official described the new practice facility as a “country club.”

And so it begins… @warriors

Previously, the Warriors practiced in a facility atop the Oakland Downtown Marriott while playing games at Oracle Arena.

“This one locker room thing is kind of growing on me, being in the same spot every day with the practice facility right here. All the state-of-the-art stuff,” Curry said. “[But] it takes a lot to replace the emotional connection to a building and the faces. I know there are a lot of men and women who used to work the building at Oracle that came over. But there has been a lot of change, including my security guys. …

“The way we get into this building, we don’t see a lot of people. It’s a bunker situation. It’s quiet. There was a scene walking from the parking lot to the locker room [at Oracle] where there was a buzz. I liked it because that’s how it was and I had fun with it.”

There is also the challenge of beating the traffic just to make it to a 7:30 p.m. tipoff whether in the East Bay or even San Francisco. Warriors guard Jacob Evans and newcomer Glenn Robinson III both live in San Francisco and are still trying to figure out the traffic in town. Curry says he leaves home 15 minutes earlier than he did before for games from Atherton and arrived at one preseason game 25 minutes late.

“The biggest adjustment for me is learning when I need to leave, move around and not get caught in traffic. I live right by the exit before you get on the Bay Bridge,” says Evans.

While the Warriors did move eight miles, Curry and the franchise did not want to change the familiar faces behind the scenes. 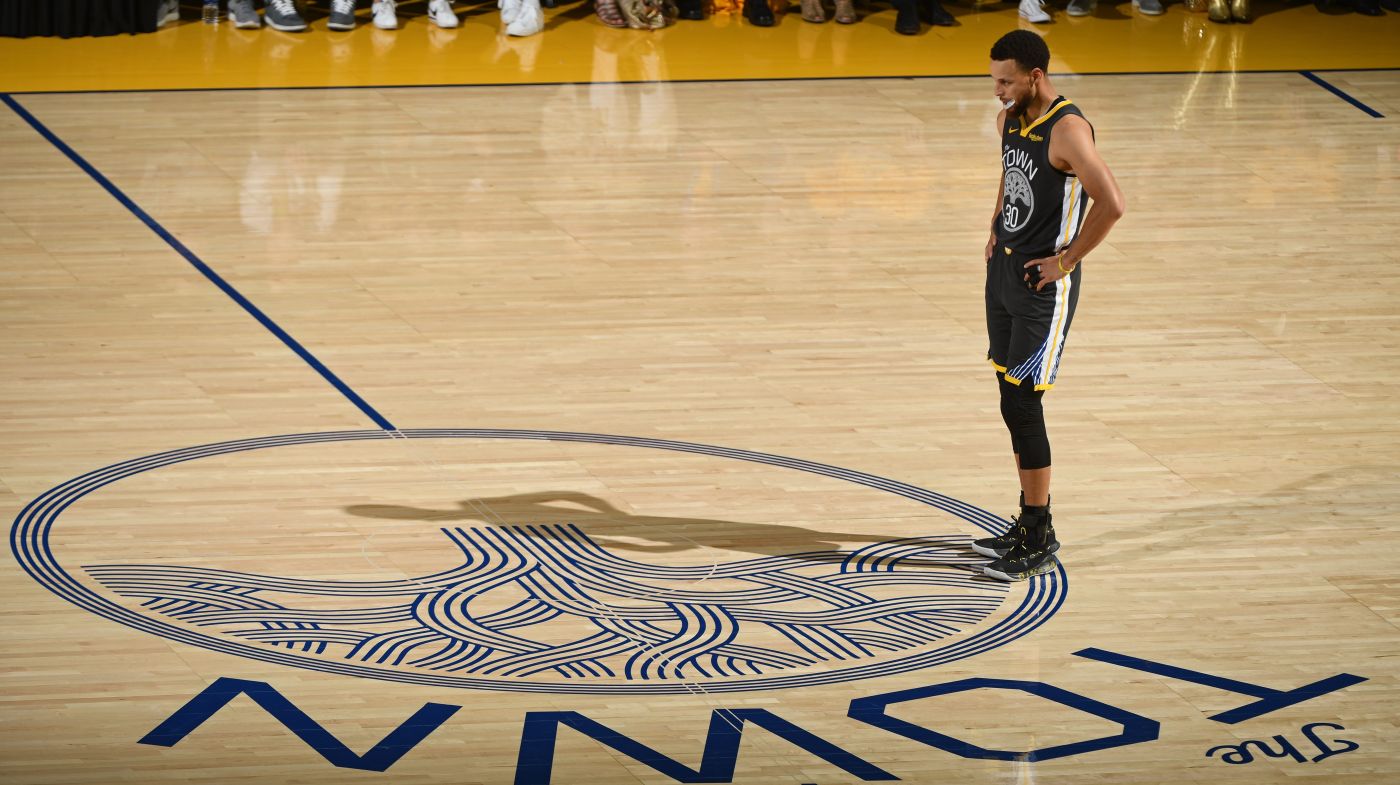 The Undefeated talked to several arena floor security guards, ushers and food preparation workers who made the transition from Oracle Arena to Chase Center, all of whom declined public comment. Most were African Americans living in Oakland or the East Bay Area. Several said that the most workers retained their jobs primarily at Warriors games and credited the team for the opportunity. While Oakland has a large black population and proud history, seeing lots of African American employees anywhere in San Francisco is not the norm with its 5% black population.

But on this night, two black floor security guards greeted each other warmly before the Clippers game.

“So you made it over the Bay Bridge,” one said.

After the predominantly black floor security team met pregame, they got into a huddle, put their hands in and yelled, “Family!”

The @chase_center game floor security is primarily the same folks the #Warriors were familiar with at Oracle Arena. After a pre-game meeting, they got into a circle and yelled, “Family.” @stephencurry30 talked about the importance of that in @undefeatedespn. Story link in bio.

Curry and many members of the Warriors are familiar with the predominantly black floor security that they have known for years and have experience with keeping NBA games safe.

Curtis Jones still works security next to the Warriors’ bench. He is the black man who famously used to pass the ball to Curry for a hallway shot at Oracle Arena. But there is no similar hallway at Chase Center, so now Jones passes it to Curry for a crazy behind-the-basket off-court shot that the latter missed pregame.

“That’s big because they’re a part of our culture and our team,” Curry said. “You can change the building, but the people make the building. I didn’t want to have to say anything. We had conversations last year about how important that would be. … From what I heard, they tried to get back as many people as possible under the new system.”

But it has not been all joyous. Several workers said they have not felt completely welcomed by the Chase Center officials. Other challenges for some workers include the longer drive over the Bay Bridge, the subway ride to San Francisco that drops one off two miles from the new arena, and parking fees on both sides of the bridge. One security guard said he was trying to get a big van together so many of them could ride to the game together.

“I don’t think they really want us here. I can just feel it,” one food preparation worker said.

“I don’t think they really want us here. I can just feel it,” one food preparation worker said.

The Warriors were known as having a diverse crowd of all colors at Oracle Arena. A Warriors official has previously said that 70% of the season-ticket holders returned. But the 30 percent who opted out may have been due to a one-time “membership fee” of $15,000 to $75,000 per seat depending on the seat, according to the San Francisco Chronicle. The newspaper wrote that fifth-row center seats that cost $375 each per game at Oracle Arena were $600 each at Chase Center with a $35,000 membership fee.

One former Warriors suite ticket owner at Oracle Arena who didn’t renew but was at the Chase Center opener said: “There are a lot of black folks in the house tonight. But they are the help and the entertainment.”

Despite that observation, the crowd still did appear to have a lot of diversity.

There were still some reminders of the soul of Oracle on opening night, including rapper E-40 sitting courtside, Carlos Santana playing “The Star-Spangled Banner” pregame, Warriors patriarch Al Attles doing the ceremonial first tipoff, Franco Finn emceeing and DJ D Sharp spinning. But fair or unfair, the Chase Center has a reputation for being wine and cheese. TNT Sports commentator Charles Barkley joked on television that the Warriors fans at Chase Center were wearing silk robes and slippers.

The fans at Oracle Arena went through three decades of mostly lean years before the Curry effect took place and the Warriors won three NBA titles over the past five years. The Warriors went from lovable loser to one of the world’s most popular and valuable sports franchises. In the midst of all that, Warriors co-owner Joe Lacob spearheaded the move to the new arena in San Francisco to very mixed reviews and didn’t consider staying in Oakland.

Curry says he understands the decision by Warriors ownership.

“It’s a day-by-day process,” Curry said. “I’m getting a new routine. I feel like a rookie again in that respect. But, it will come. This place is nice. It has a lot of potential in terms of an atmosphere we can really build in here. It’s a lot of good things to it. We just have to figure it out here. …

“It was a total business decision. It makes sense the way they want to usher in a new era of global basketball. It was going to happen regardless of what I said.”

While the arena is beautiful, the Warriors’ first game was nothing to remember as they fell behind 14-0 and were routed by Kawhi Leonard and the Clippers. No, this was not the Golden State team that has dominated the league the last five years. Kevin Durant has gone to the Brooklyn Nets. Klay Thompson is recovering from knee surgery and may not return this season. Andre Iguodala was traded. And Shaun Livingston retired.

The Warriors are one of the youngest teams in the league, with nine players age 23 or younger. Coach Steve Kerr said after the game that the blowout could be one of many this season.

Curry walked to the locker room slowly with his head down after the brutal loss. He had 23 points, but missed nine of 11 3-point attempts and committed eight turnovers.

“I was just replaying a lot of stuff in my head,” Curry said. “We understand this is going to be a long journey. We understood this was going to be a tough game with how good they are and how good they play. But I was coming to grips with the feeling of coming off the court and getting your heads beat in, understanding that it’s not OK. We got to figure something out.”

One big question about the new Chase Center was whether it could be loud like “Roar-acle.”

It actually was at the start as Thompson received an ear-piercing ovation as did Curry and Draymond Green in the starting lineups. There were early chants of “Warrrriors, Warrrrriors” before tipoff. But as the Clippers dominated the Warriors early, it got quiet quick. The glitzy venue was half-empty by the halfway mark in the fourth quarter.

“We didn’t give them much to cheer about,” Curry said. “We had some good energy. We had a couple runs, and it got loud. But we still want to get to a game where we have it all together and really give our fans something to cheer about. Give them an opportunity. There really wasn’t much of one tonight.”

It was only one game, but it will take some time for the Warriors and their fans to get used to Chase Center.