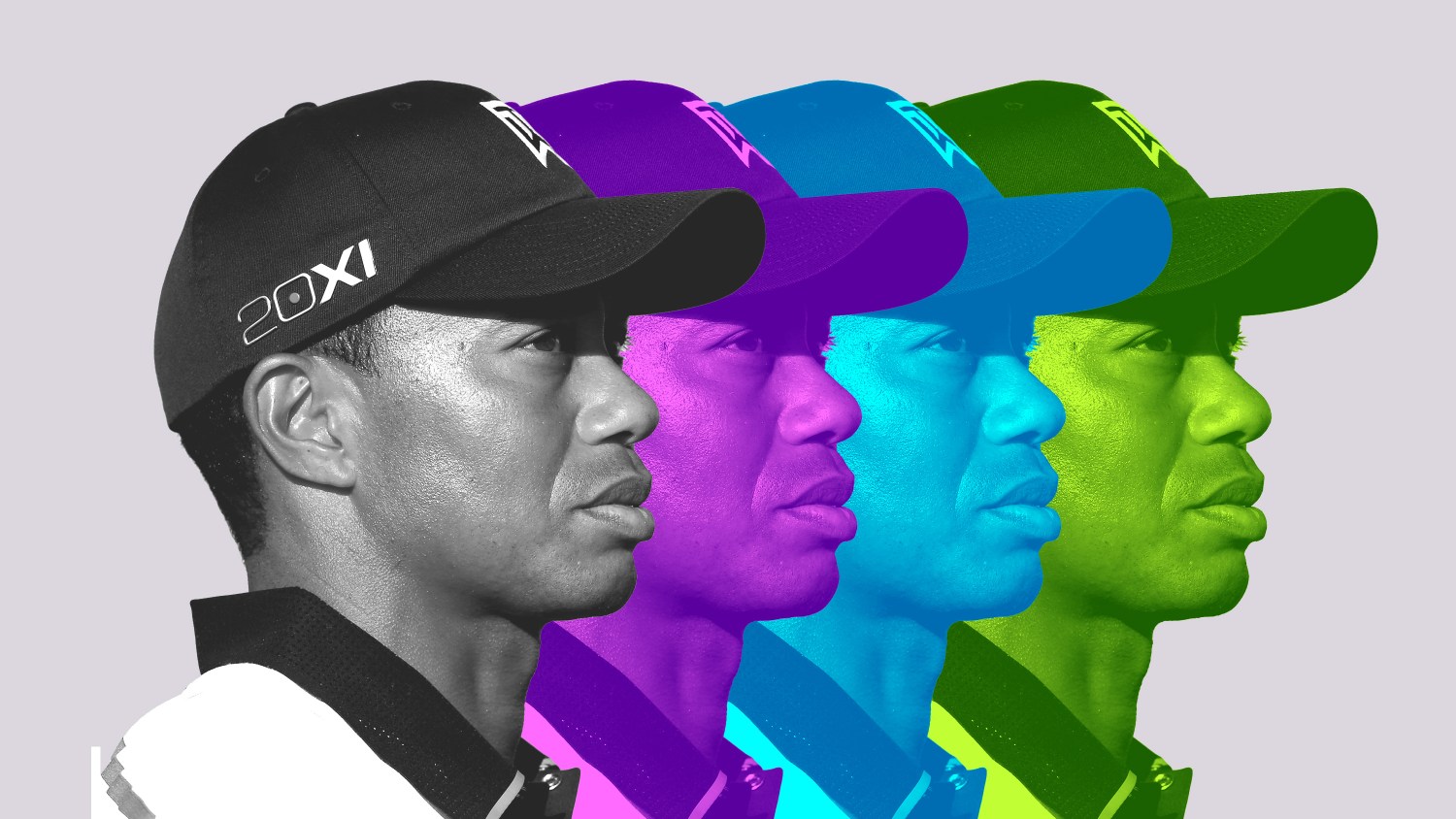 Tiger Woods, once the fresh-faced future of golf, stared into the police camera with a forlorn look and hooded eyes. A 41-year-old man who has famously insisted on his mixed racial heritage was identified in the arrest report with one word: black.

The former No. 1 golfer in the world was sleeping at the wheel of his Mercedes-Benz early Monday when Jupiter, Florida, police said they spotted his car stopped in the road, its blinker flashing and engine running. He was charged with driving under the influence of drugs or alcohol and is scheduled for a court appearance on July 5. Woods, who is recovering from back surgery, apologized for the incident, saying in a statement that it resulted from “an unexpected reaction to prescribed medications.”

The arrest marked another twist in Woods’ quest to return to the PGA Tour after a nearly two-year layoff. His attempted comeback has stoked widespread fascination with the drama of an iconic athlete battling age and injury in an attempt to regain his championship form. But as big a part of the attraction is Woods’ standing as a racial trailblazer. He is a person of color who conquered golf. He holds the record for most consecutive weeks, 281, atop the world golf rankings. He won 79 PGA titles and 14 majors, putting him second all-time on each list.

All of this looms large because of the sport’s racist history. Not only did professional golf’s most prestigious tournament, the Masters, bar black players until 1975, but its hallowed course in Augusta, Georgia, had no black members until 1990. Woods won the Masters for the first time in 1997 at age 21, making him the youngest player to win there. He has gone on to win the tournament three more times.

In the minds of many African-Americans, those achievements made Woods the Jackie Robinson of golf. The analogy would fit nicely if only Woods saw himself as black. Or only black. But Woods, 41, has long chosen to embrace his full multiracial identity. Rather than black, he sees himself as “Cablinasian” — a mix of Caucasian, black, (American) Indian and Asian.

Nobody can argue with his precision. His mother, Kultida, is of Thai, Chinese and Dutch descent. His late father, Earl, said he was African-American, Chinese and Native American. If that is accurate (and some say his father’s Chinese heritage is subject to dispute), Woods is more Asian than he is black. In any event, he has explained that to call himself African-American would have the effect of writing his own mother out of his racial identity.

Woods’ decision to embrace his full multiracial identity was respected by many African-Americans as his right. But others who celebrated his many breakthroughs and saw his success as their own, treated it as a rejection — not to mention a sign of naiveté, cowardice or even betrayal.

There were jokes that Woods would know he was black if he tried to catch a cab at night. Even Colin Powell, the first black chairman of the Joint Chiefs of Staff, when asked about Woods, was quoted as saying, “In America, which I love from the depths of my heart and soul, when you look like me, you are still considered black.”

The criticism only intensified when Woods got caught up in the sex scandal that presaged his golfing decline and ended his marriage. Like his ex-wife, each of Woods’ many mistresses was white. The fallout weakened Woods’ already shaky standing among many African-Americans.

Years later, the debate about racial identity ignited by Woods continues to resonate. Angela Yee, co-host of the Breakfast Club, a nationally syndicated radio show, relates to Woods’ situation. Her mother is black and from Montserrat, a small island in the eastern Caribbean. Her father is Chinese.

Growing up in black neighborhoods in Brooklyn, New York, and South Orange, New Jersey, she had nearly all black friends and schoolmates. She listened to black music and considered herself culturally black. Yet, she also celebrated Chinese New Year and embraced both her Asian and black heritage. So she understands Woods’ choice, although she is disappointed by it.

“As a person who is mixed-race myself, I do identify as both black and Asian,” Yee said. “But to be as good as he has been in the world of golf, and with black people so proud of his success, it would have been great to have Tiger say, ‘I’m black and I’m proud.’ ”

Yee explains that when she is asked to check a racial box, she chooses African-American. At the same time, she acknowledges that racial identity can be a tricky thing. Often, when people see or hear her last name, she said, “they assume I am straight-up Asian.” At times, that has led to unfair assumptions. Earlier in her career, a blogger who had only heard her on the radio complained, “Asians are taking over our culture.”

Racial identity has long been both subjective and mutable. Barack Obama is biracial, and was raised by his white mother and white grandparents. But he will go down in history as the first black president in no small part because he identifies as black, married a black woman and raised two black daughters.

Paris Jackson, the blond, blue-eyed daughter of the late Michael Jackson, recently told Rolling Stone that she thinks of herself as black, even if a casual passer-by might not.

New York Yankees legend Derek Jeter is the son of an African-American father and Irish-American mother. As a child growing up in Kalamazoo, Michigan, he “sometimes felt the stares” of people in town when he was out with just one of his parents, he told his biographer Ian O’Connor. Coming up, he claimed both sides of his heritage. He would tell people he was black and white, or black and Irish. Once he became a baseball superstar, he was romantically linked to a series of beautiful women, many of whom were white.

But Jeter’s mixed-race background did not prevent him from receiving a threatening letter in the clubhouse from someone who promised to shoot him or set him on fire if he continued dating white women. The missive was investigated by the FBI and the New York City Police Department’s hate crimes unit. Jeter publicly shrugged the threat off as “just a stupid letter,” and last year he married Hannah Davis, who happens to be white.

In America, the idea of black identity being linked to even “one drop” of black blood is inextricably tied to the nation’s racist history. Beginning in 1850, mulatto was the name the government assigned to mixed-race African-Americans. By 1890, the census became more exacting, defining mulattoes as people with “three-eighths to five-eighths” black blood. A quadroon was someone who had one-quarter black blood, and an octoroon had one-eighth or less black blood.

But even people with just a drop of black blood might as well have been all black as far as the law was concerned. In its 1896 decision Plessy v. Ferguson, the U.S. Supreme Court ruled that the French-speaking and white-looking Homer Plessy could not ride in a whites-only rail car in Louisiana because he was an octoroon. The ruling cemented separate-but-equal as the law of the land for more than half a century.

The one-drop rule stood as the nation’s racial standard until the middle of the 20th century, meaning that if someone was a mixture of white and any other race he could not be counted as white. In 1930, for instance, census takers were told that a person who was both black and white should be categorized as black, “no matter how small the percentage of Negro blood.”

Those strictures have slowly given way, and in recent years an increasing number of Americans are embracing their full identities. The 2010 census had 63 possible racial categories: six for single races and 57 for combined races. In 2010, 2.9 percent of Americans, a total of 9 million people, chose more than one racial category to describe their racial identity, according to the Pew Research Center.

Even as Woods has refused to embrace his blackness without simultaneously acknowledging the rest of his racial identity, he has always been aware of golf’s shameful past and saw himself as someone who would help usher the game into a new era.

Woods was a 14-year-old prodigy when an interviewer asked him about his goals as a golfer. Woods answered that he wanted to be a superstar. “Since I’m black, I might even be bigger than Jack Nicklaus,” he said. “I might be even bigger than him, to the blacks. I might be sort of like a Michael Jordan in basketball.”

Asked whether there was a tournament that he wanted to win once he turned professional, Woods did not hesitate. “The Masters,” he said.

“The way blacks have been treated there. [Like] they shouldn’t be there,” he said. “If I win that tournament, it will be really big for us.”

Seven years later, Woods won the Masters by a record 12-stroke margin. His victory rocked the golfing world, and not everyone knew how to handle it.

As Woods was cruising to victory, tour veteran Fuzzy Zoeller was asked about the young pro’s performance.

“He’s doing quite well, pretty impressive. That little boy is driving well and he’s putting well. He’s doing everything it takes to win,” Zoeller said of Woods. “So, you know what you guys do when he gets in here? You pat him on the back and say congratulations and enjoy it and tell him not to serve fried chicken next year. Got it. Or collard greens or whatever the hell they serve.”

Zoeller called the remark “a joke gone awry,” and Woods was forgiving. He was similarly forgiving in 2008 when broadcaster Kelly Tilghman said golfers challenging the dominant Woods in the Mercedes-Benz Championship should “lynch him in a back alley” to win. Through his agent, Woods said, “We know unequivocally that there was no ill intent in her comments.”

Woods has said he also faced racial hostility back when he started school in Orange County, California. On his first day of kindergarten, he said, a group of sixth-graders tied him to a tree, spray painted the N-word on him and then threw rocks at him. He said his teacher “didn’t do much of anything” about the assault. The former teacher has dismissed the story, which Woods has recounted in several interviews, saying it never happened.

Through the years, Woods has paid tribute to the black pros who paved the way before him: Lee Elder, Teddy Rhodes, Bill Spiller, Calvin Peete, and most of all, the late Charlie Sifford, the first African-American to play on the PGA Tour. Woods would refer to Sifford as his grandfather and went on to name his son, Charlie Axel, after the golfing pioneer.

Meanwhile, the 20-year-old Tiger Woods Foundation has spent tens of millions of dollars (more than $7 million in 2015 alone) on after-school centers and scholarships for low-income students.

Woods’ substantial philanthropy and respect for golf’s racial history has not been enough to draw other young black golfers onto the professional circuit. Is it because of his refusal to identify only as African-American?

The National Golf Foundation estimated that 1.4 million African-Americans were recreational golfers in 2009, the latest year for which statistics are available. Yet, there is only one African-American on the PGA Tour: Harold Varner III. And there is also only one Cablinasian: Tiger Woods.