The Year of the Black Quarterback: The Trading Cards

The fighter Harris rose from the Jim Crow South to fight more discrimination in the NFL. First black quarterback to start a season opener (Buffalo Bills). First to lead a playoff team (Los Angeles Rams). And L.A. still shoved him aside for white QBs. He had to fight again for front-office gigs.

What could have been Gilliam was so good he beat out incumbent Terry Bradshaw for the Pittsburgh Steelers starting job before the 1974 season, but poor performance got him benched after six games. The ugly, racist reaction from fans was overwhelming. Gilliam was out of the NFL a year later.

From cellar to Super Bowl In 1982, Williams was the lowest-paid starting QB in the league. When the Tampa Bay Buccaneers wouldn’t meet his contract demands, Williams left the NFL for the USFL. Back in the NFL four years later, he was money, leading the Washington Redskins to a Super Bowl title.

Make ’em look ‘stupid’ Before Lamar Jackson, before Michael Vick, there was Cunningham. Nearly 30,000 passing yards, almost 5,000 rushing. He did it all, and was faster than any other QB. “Randall can make guys look stupid more than anyone I’ve seen,” Hall of Fame linebacker Andre Tippett once said.

‘Air’ McNair The last great quarterback from a historically black college (he ended up at Alcorn State when bigger schools wanted him to play defense — sound familiar?), McNair was the first black quarterback to win the NFL MVP award, in 2003, though he had to share it with Peyton Manning.

Get your roll on One of the best high school players in the history of Florida, Culpepper led the Minnesota Vikings to an 11-5 record and the NFC championship in his first full season as the starter, and kept us dancing with his touchdown celebration inspired by Big Tymers’ “Get Your Roll On.”

Fly Eagles fly McNabb will be mocked forever for allegedly puking during the Super Bowl, but he quarterbacked the longest stretch of success Philadelphia has ever had: eight playoff appearances in 10 years. And to think fans booed when the Eagles drafted him over Ricky Williams.

The first No. 1 The electrifying Vick is the answer to at least one trivia question: He was the first black quarterback drafted first overall, in 2001. With the Falcons, Vick embodied Atlanta: unapologetic in his swagger, bringing a new vibe to the NFL like the city brought a new vibe to rap.

Man of the people For a too-brief period, Kaepernick was a sensation. The tattoos, cornrows and bicep kisses showed the world who he is. He unapologetically led the San Francisco 49ers to consecutive deep postseason runs. Then he sat down for The People. The NFL will never be the same.

Superman Newton is knocked and mocked for a lot: his eclectic fashion sense, his postgame news conference at Super Bowl 50, his Superman celebrations, his font choice on social media. But Newton has led the often-overlooked Carolina Panthers to a Super Bowl and won the MVP.

Broken superstar Griffin led the Washington Redskins to a 10-win season and NFC East title his rookie season. A talented black quarterback in one of the country’s blackest cities, he was what D.C. needed, what it craved. Then came his knee injury and things were never quite the same.

The winner In the history of the NFL, one quarterback has led his team to a winning record in each of his first eight years: Wilson. The Seattle Seahawks have been to the playoffs in seven of those seasons, with one Super Bowl win. Not bad for a guy everyone said was too short to succeed.

Cool cowboy Prescott went from fourth-round pick to face of Dallas Cowboys in a matter of months, and with predecessor Tony Romo’s blessing. Quarterbacking the NFL’s most-talked about team isn’t an easy job, but Prescott handles it well. It helps when you’re winning, of course.

Young gunslinger Crazy arm angles, no-look passes, numbers only Peyton Manning and Tom Brady had before him —Mahomes’ 2018 season-long, coming-out party made him the second-youngest MVP ever. His obsession with ketchup aside, his status as the league’s next great QB seems assured.

Drama king Watson’s personal story could make a tearjerker, which is fitting because he has a dramatic flair on the field, too. He’s already built an impressive resume of come-from-behind wins for the Houston Texans. A bona fide football nerd, he can break down a defense in a moment’s notice.

The future There may have been only one or two pundits who suggested Jackson move to receiver, but he won’t let anyone forget he was doubted. He’s a master of improvisation, not mistake-prone, seemingly made for the spotlight and changing the way we think about quarterback play.

Desert star The first man ever chosen in the first round of the NFL and MLB drafts, Murray had the potential to bring back the days of the two-sport superstar. He chose to focus on football and overcame doubts about his height (5-foot-10) to be drafted No. 1 overall by the Arizona Cardinals. 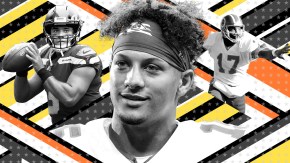