The state of Black baseball slowly shifting from acceptance to belonging

While once in despair, Black baseball is now stable and part of the culture, as evidenced by MLB’s current and future stars

The dog days are coming to a close, the trade deadline is past us and we’re officially in the heart of the Major League Baseball season, so it’s time to take stock. Before the pennant races begin and football takes over our national attention, there’s a question worth answering that is asked of me often: what is the state of Black baseball in 2022?

Now, this question isn’t as simple as is the player percentage higher or lower in the MLB than last year. Currently, the number sits at around 8%. The highest it’s been is around 18%. For what it’s worth, the percentage of Black people in America is around 13%. I don’t think we’ll ever see that high-water mark again, which isn’t necessarily a terrible thing.

Setting aside the very hyperspecific world of college coaching, Black baseball is in one of the more robust places we’ve seen it in a long time. Not because sandlots and stadiums across America are teeming with Black kids, but because it feels like we’re taking a step away from just “acceptance” and are far closer to “belonging.”

They are not the same thing. While the former is typically followed closely by the latter, when it comes to human beings and the societies we build, the assumption of that linkage can be hasty. In baseball, it was almost a fallacy for us.

Now, looking around the everyday machinations of baseball, these days, it feels like our culture at the very least is as close to the fabric of the game as it’s been in my adult life. Working backward to the All-Star Game, it occurred to me that if you really wanted to follow the game almost exclusively through Black players, you wouldn’t be missing a ton. And you’d be having a lot of fun.

Tuesday night, the San Diego Padres, the new darlings of the league after trading for the swaggiest player in the game, Juan Soto, beat the San Francisco Giants in a fun walk-off victory. Part of that trade was Josh Bell — known awesome guy — who’s having a career year. And I don’t need to remind you that the Los Angeles Dodgers’ Mookie Betts is arguably the best player on the best team in baseball, and absolutely showed out when the Midsummer Classic came to his city.

He broke out the now legendary “We Need more Black People at the Stadium” T-shirt, which was created by a South Central LA design house Bricks & Woods. It caused a minor stir — most of the players on the field thought it was awesome — but the consensus was: He’s right. Because he is.

His afterparty featured noted former ballplayer Nelly and there were far more NBA faces at baseball parties than most of the players could remember. In the lobby of the media hotel, typically a clearinghouse for all sorts of baseball types, the crowd was largely full of Black and Latino players and their families after the actual game. What is normally the kind of environment I have to brace for felt like a family reunion for a good part of the weekend.

At The Players Alliance party, they celebrated the lives and careers of Darryl Strawberry and Eric Davis, Los Angeles natives. Davis is now a special assistant for the Cincinnati Reds, and was a part of the Futures Game coaching staff. A game in which, by the way, Darren Baker (son of Dusty) was playing in, two days before he was promoted to Class AA Harrisburg in the Nationals organization. Before that game, another member of the coaching staff, Jerry Manuel, was hitting him grounders, just like he used to do in Sacramento, California, when Darren was 11 years old.

Manuel’s son Anthony, an infield instructor for the Reds’ minor league player development staff, was ecstatic because he was going to get to work with two Black infielders right away who were just drafted. One of them Cam Collier, son of former big leaguer Lou Collier, and another kid Trey Faltine, whom you might have seen in the College World Series the past two seasons, playing for Texas. Four out of the top five picks in the MLB draft were Black, which is unprecedented.

Perhaps Kumar Rocker is the most interesting tale of the draft. A flat-out superstar college baseball player at Vanderbilt, he quite famously was drafted by the New York Mets in 2021, and they never ended up signing him over injury concerns. He came back and was picked by the Texas Rangers, even higher at No. 3 this year than the first time, when he was picked No. 10. It was as stunning individually as the day was collectively for Black draftees.

The state of Black baseball, while once in despair, is now at the very least stable.

Business might not be booming like the days of the 1980s, but in almost every place you look in the game, we’re in the building. The efforts feel like there’s far less tokenism than even five years ago.

Sons of former players are all over the place. The academies are creating participation rates that are undeniable. Every big-league team of consequence has a Black player most baseball fans have heard of and the programs that MLB itself has created are bearing fruit. Sure, we might not be in the days when the St. Louis Cardinals fielded Ozzie Smith, Vince Coleman and Willie McGee, but if you saw the Hank Aaron Invitational game played at Truist Park in Atlanta where Luther Ellis III, a shortstop and South Carolina commit, turned an impressive backflip while taking the field, you couldn’t help but remember them. Funny thing is, he said after the game that he barely knows who The Wizard (Smith) is, but who cares? Kid is as exciting as it gets.

Additionally, Buck O’Neil was finally inducted into the Hall of Fame. A lifetime of hard work by many Negro Leagues advocates was finally realized. A far cry from a short time ago, when MLB basically said regarding Negro Leaguers, “you’re finally one of us in the statbook, be thankful.” Again, acceptance and belonging aren’t the same.

Jackie Bradley Jr., a brotha who was the MVP of the 2018 American League Championship Series, was designated for assignment by the Boston Red Sox after having his worst season but was immediately picked up by the Toronto Blue Jays, contenders who want to give him a shot. Devin Williams, the first-time All-Star for the Milwaukee Brewers whose 2021 season ended in unfortunate pain, was given an incredible vote of confidence as a reliever when they traded Josh Hader, the best closer in the game, away from their bullpen while in first place.

Business might not be booming like the days of the 1980s, but in almost every place you look in the game, we’re in the building. The efforts feel like there’s far less tokenism than even five years ago. 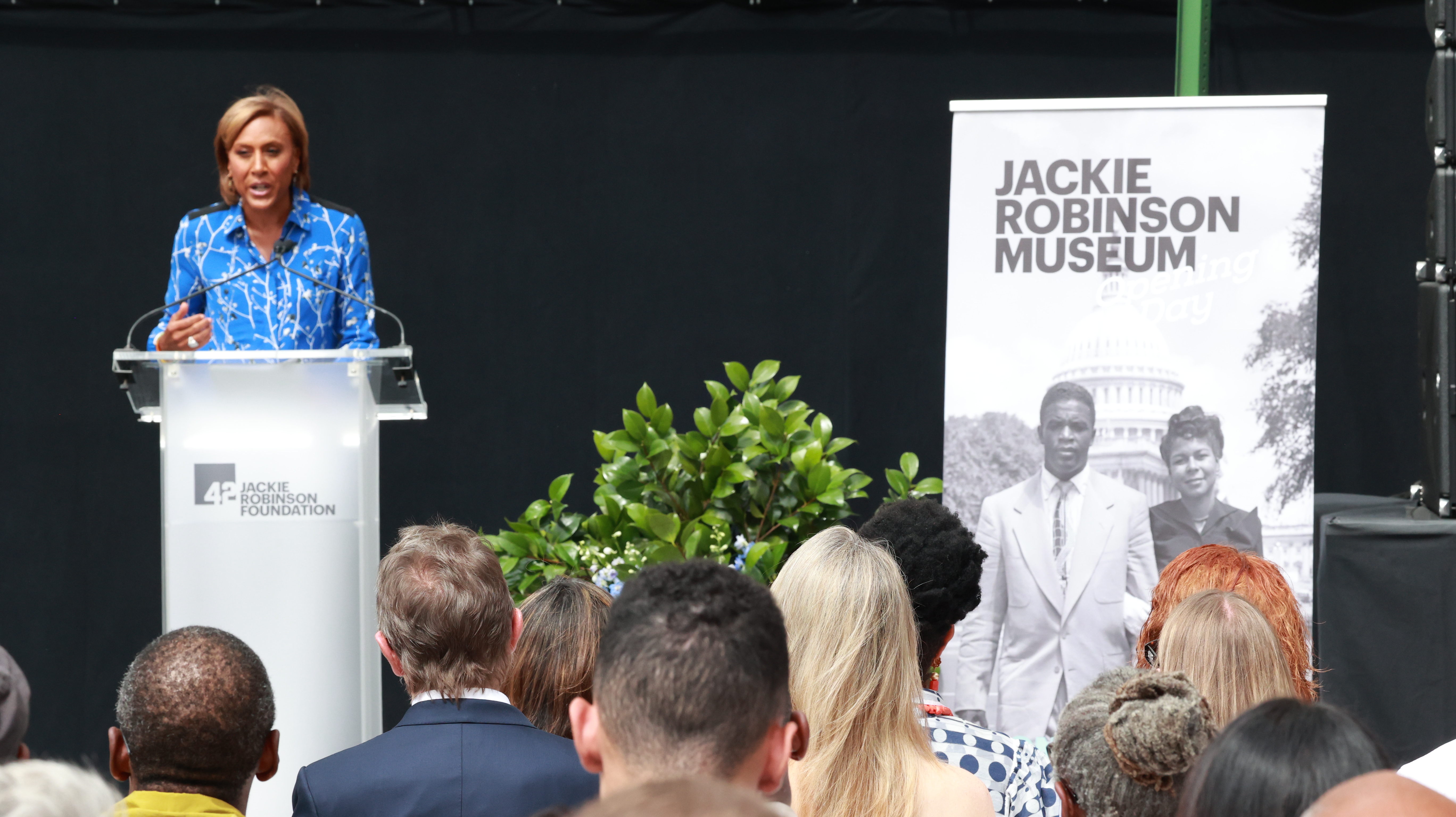 Inside the Jackie Robinson Museum, the ‘passion project’ that’s about more than a sports legacyRead now

No place is that presence more fascinating than the World Baseball Classic, arguably the game’s most glorious display of competition, and that includes MLB. USA Baseball named Tony Reagins its WBC 2023 general manager in July. In short, he picks the guys who will represent our country to the world. It might seem small, but in terms of the levels of the game we aren’t normally considered for — management and leadership — it’s significant.

Reagins is no stranger to this. As the former general manager of the Los Angeles Angels, he’s the guy credited for drafting Mike Trout. His path to the game wasn’t as a former player — he just worked in baseball until he got to the top.

For sports fans who casually pay attention to baseball, the numbers still feel alarming. To people who actually like the sport, the past season has been beyond refreshing. We’re never getting back to the days of our representation on the actual field being higher than our actual numbers in this country in the bigs.

But if you look around the culture of the game, our presence is felt. When you take a peek into the C-suites, it’s still nowhere close to optimal, but this is still America.

Too many fans are looking for proverbial home runs as a way to boost numbers in Black baseball. Clearly, the best strategy is to work station to station to score runs. And if you know anything about baseball, you know which method is more effective to winning.