The most notable sneaker scribbles in the NBA bubble

LeBron James, Chris Paul and Donovan Mitchell are among the stars adding messages to their footwear

As NBA players continue to make their voices heard from inside the bubble, they’re not only highlighting social justice messages on their jerseys; several are turning to another familiar canvas to raise awareness: their sneakers.

Grabbing a Sharpie during some pregame locker room downtime has become commonplace, sometimes with phrases coming on the fly. It’s a trend that has continued to build steam over the course of the last decade.

Boston Celtics forward Jayson Tatum will often celebrate his son Jayson Jr. through a simple “Deuce” scribble on the heel of his shoes, while the Milwaukee Bucks’ Giannis Antetokounmpo’s staples include “Man On A Mission” and “FOE,” short for “Family Over Everything.” For the month of games after Kobe Bryant’s death, Los Angeles Lakers forward Kyle Kuzma began penning “T.F.H.” along his shoes, a quickened shorthand for “Tenacious. Fierce. Heart.”

With the NBA playoffs underway, here’s a look at some of the most notable sneaker scribbles from the bubble so far. 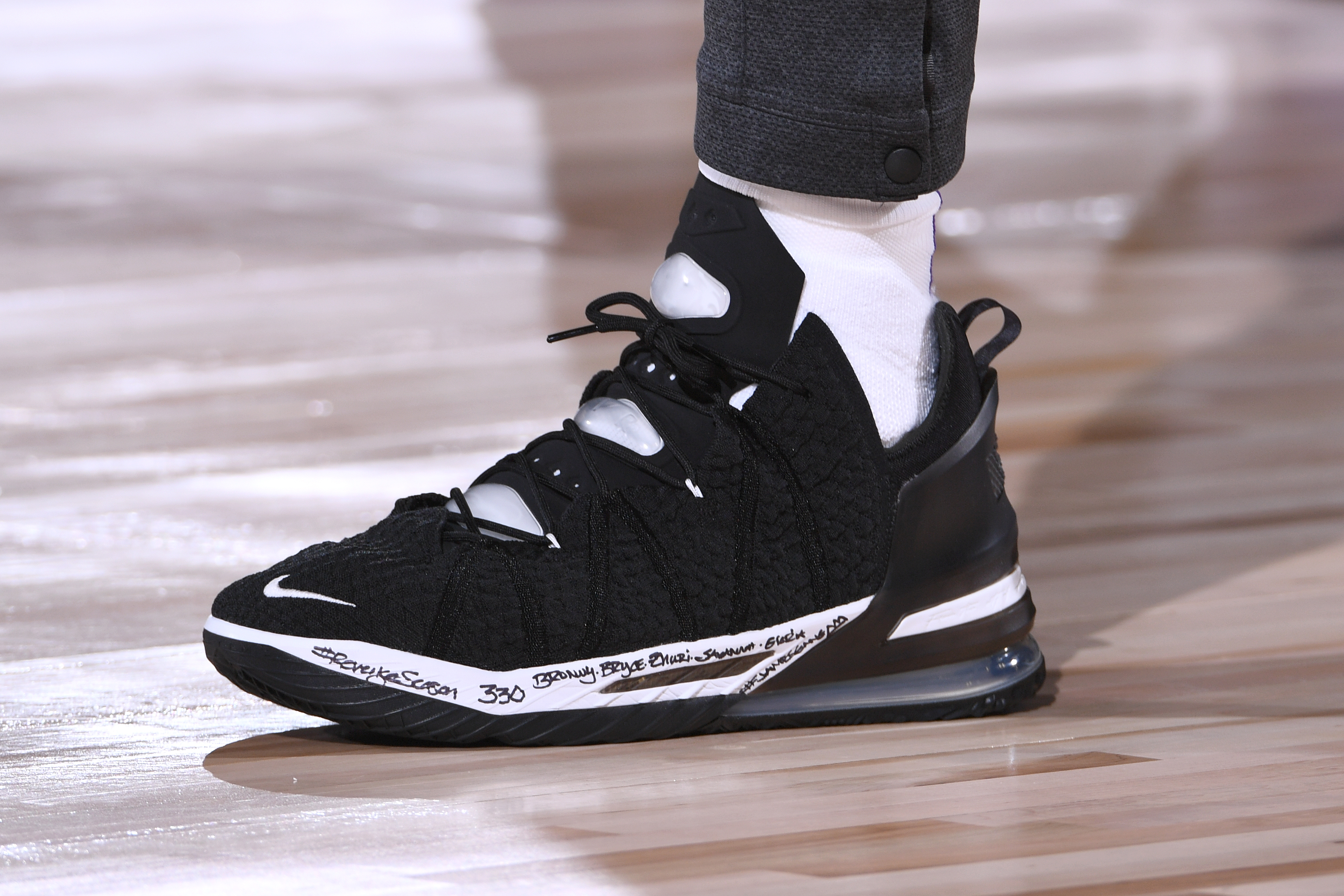 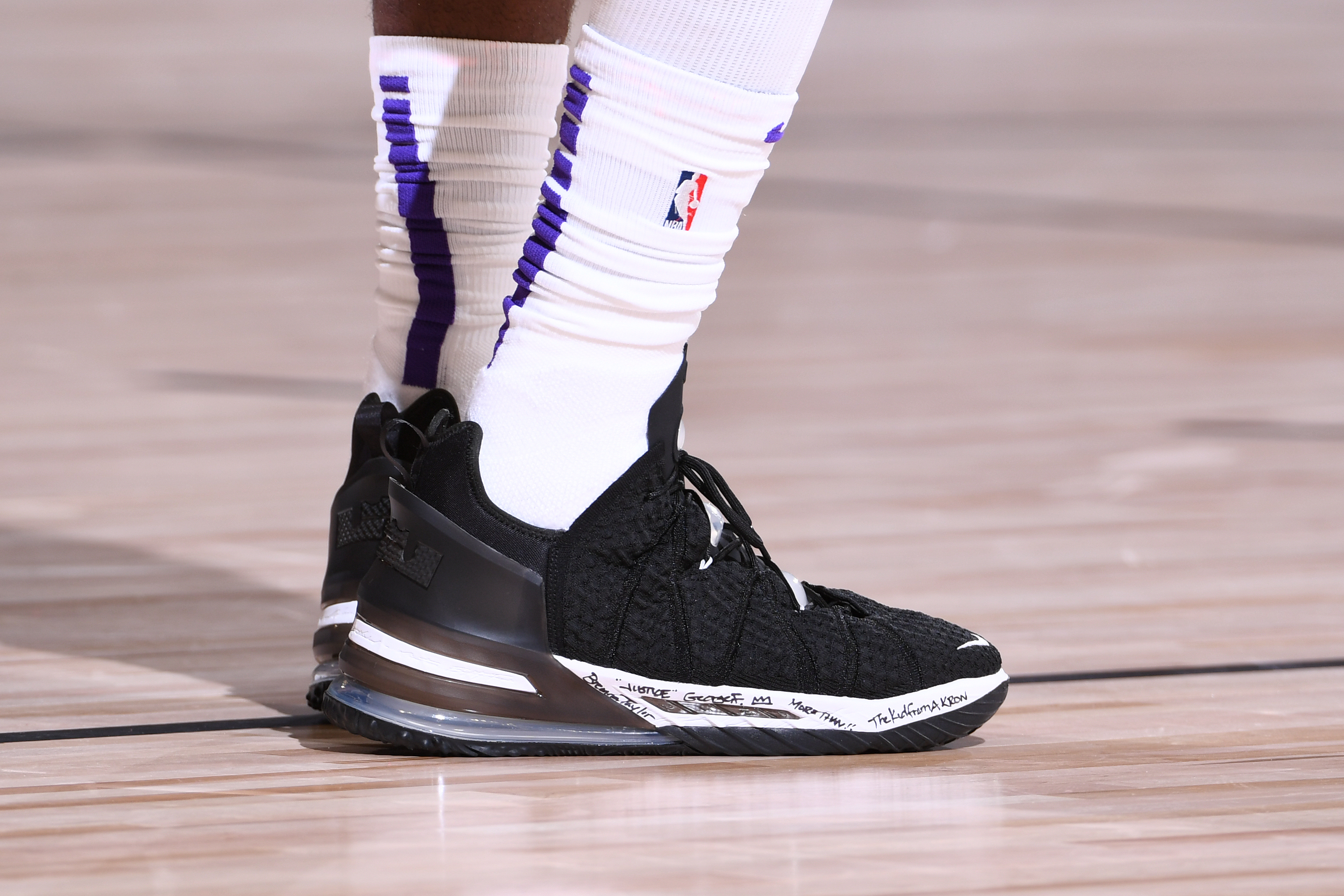 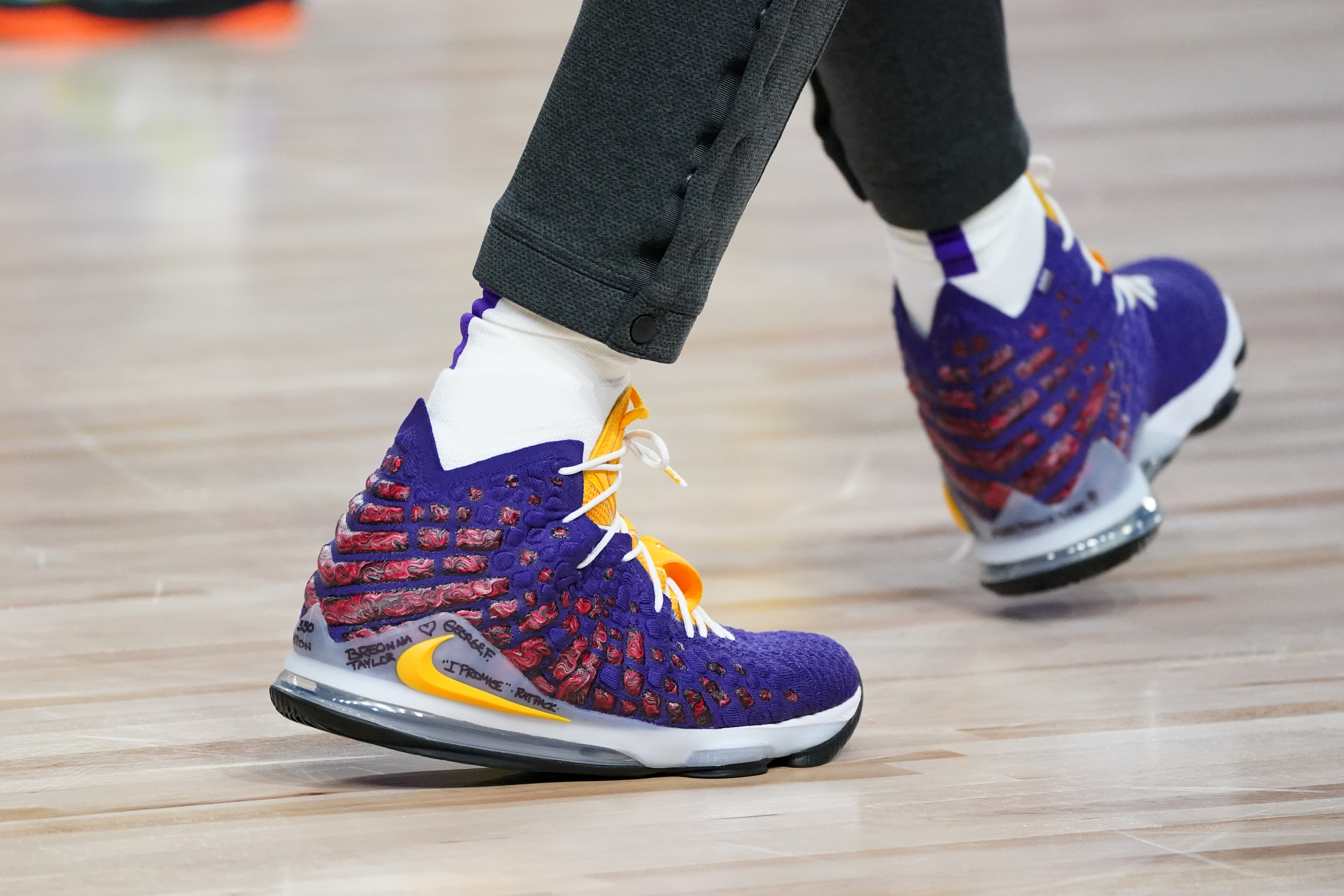 The sneakers of LeBron James of the Los Angeles Lakers are worn prior to a game against the Denver Nuggets on Aug. 10. (Getty Images)

For each of the last three seasons, Lakers star LeBron James has not only led the league with the longest active signature shoe series, now reaching its 18th model, but he’s also led the league in sneaker scribbles. On some nights before tipoff, he’ll pen as many as 15 names and messages along the midsole of his size 16 Nikes.

The odes to Akron, Ohio, its 330 area code and the #JamesGang of his family members have been constants atop his footwear in nearly every game since he began his penchant for tagging pairs with the LeBron 15.

His batch of rotating phrases this season has included “Rat Pack,” a nickname for him and his closest longtime friends. There’s also a shoutout to the students at his I PROMISE school in his hometown, along with a motivational “Revenge Season” declaration, after missing the playoffs for only the second time in his career a year ago.

He’s frequently written tributes to both Kobe and Gianna Bryant, at times writing their names along the heel of his shoes, and on other pairs simply writing their jersey numbers.

In Orlando, Florida, James opted not to select a jersey message, but has been using his sneakers instead, notably calling attention to justice for both George Floyd and Breonna Taylor. With an added spotlight on the upcoming playoffs, James plans to continue his handwritten habit, tagging up a new pair of shoes for each and every game.

“There were so many conversations before we got here that this right here, the bubble, us playing basketball, would take away from the main thing,” James said recently. “I think it’s been the absolute opposite of that. …

With everything going on, I just wanted to bring awareness to the victims of racially-profiled crimes that don’t get as much media attention as well as some others that have recently.🗣🗣🗣🙏🏾🖤 #BlackLivesMatter #TreadmillMentality #Bulldog

One of the most consistent scribblers in the bubble during the league’s eight-game restart was Phoenix Suns backup guard Jevon Carter. One of just three players wearing AND1, the rugged second-year pro received added attention by making one of the strongest sneaker statements in Orlando.

In each game, Carter would mismatch his pairs of the Attack 2.0 model, wearing one white shoe and one black shoe as a charge for equality. Along the white pair, he wrote the names of as many as 17 victims of police brutality or gun violence, wearing six different pairs in total, each with a different batch of names. Down the toe, Carter would add “All Killed,” while the heel of each shoe mirrored his jersey message, reading “Respect Us.”

“With everything going on, I just wanted to bring awareness to the victims of racially profiled crimes that don’t get as much media attention, as well as some others that have recently,” he captioned on Instagram. 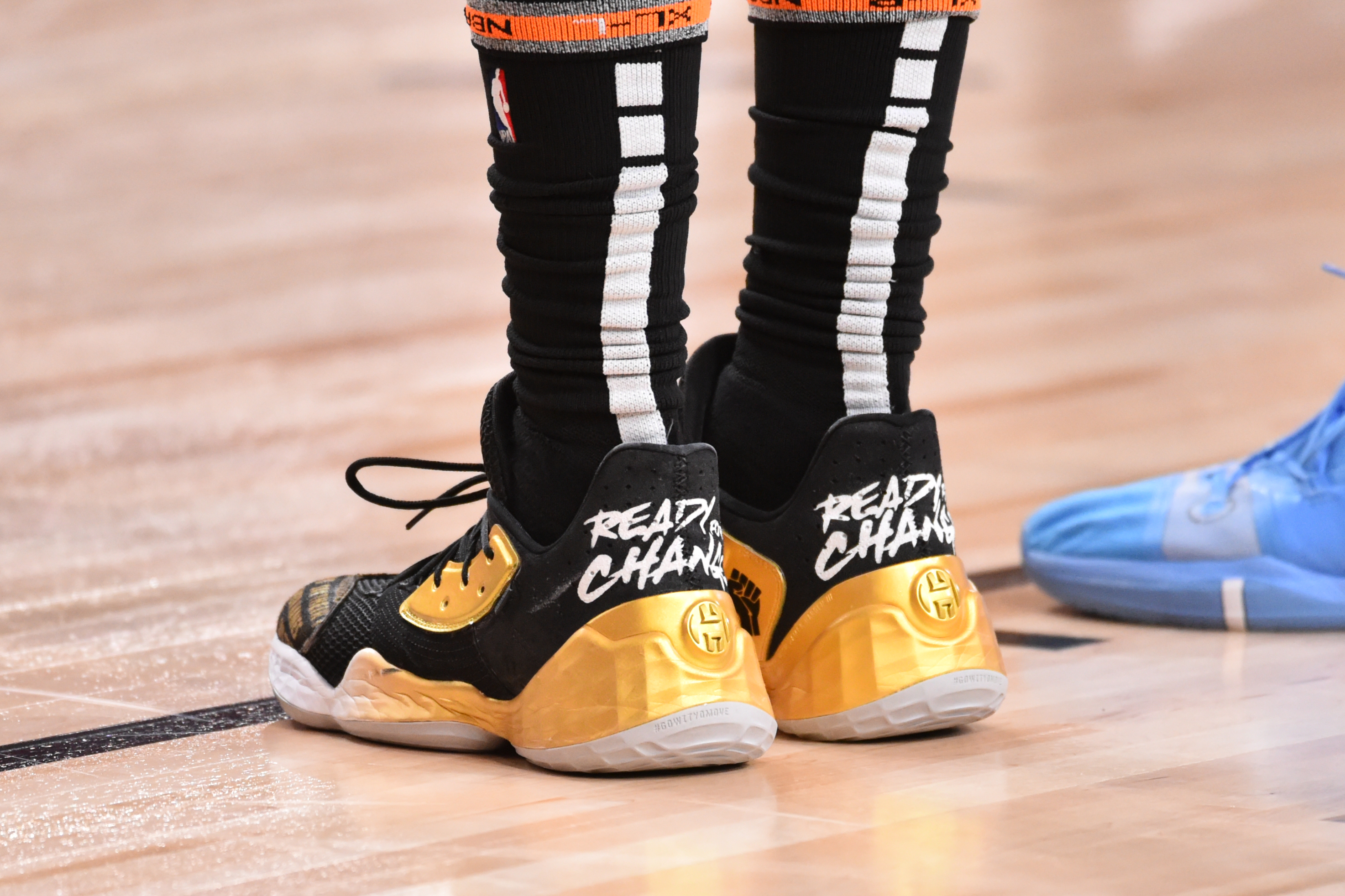 The sneakers of James Harden of the Houston Rockets are worn during a game against the Milwaukee Bucks on Aug. 2. (Getty Images) 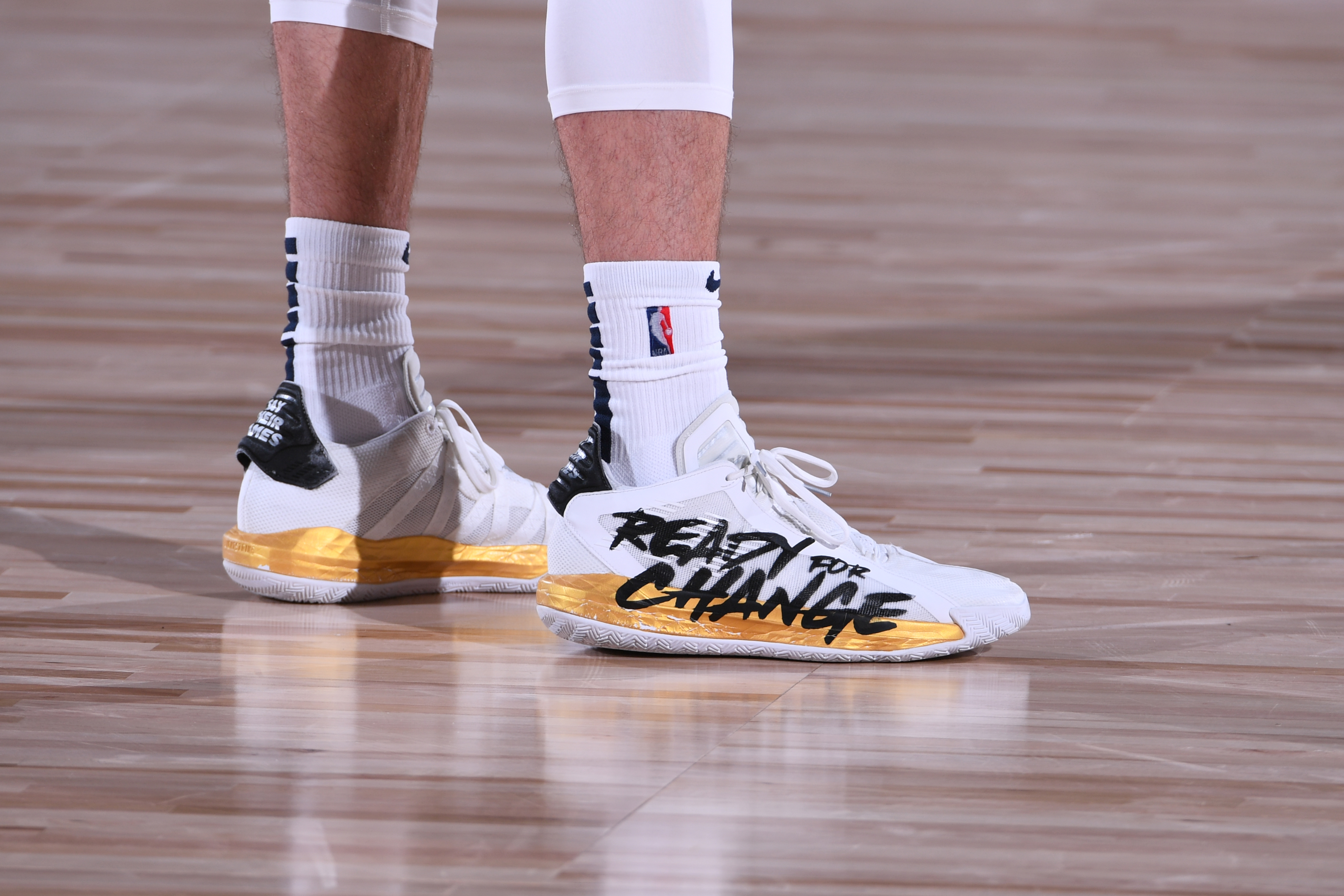 Sneakers worn by JJ Redick of the New Orleans Pelicans during a game on Aug. 7. (Getty Images) 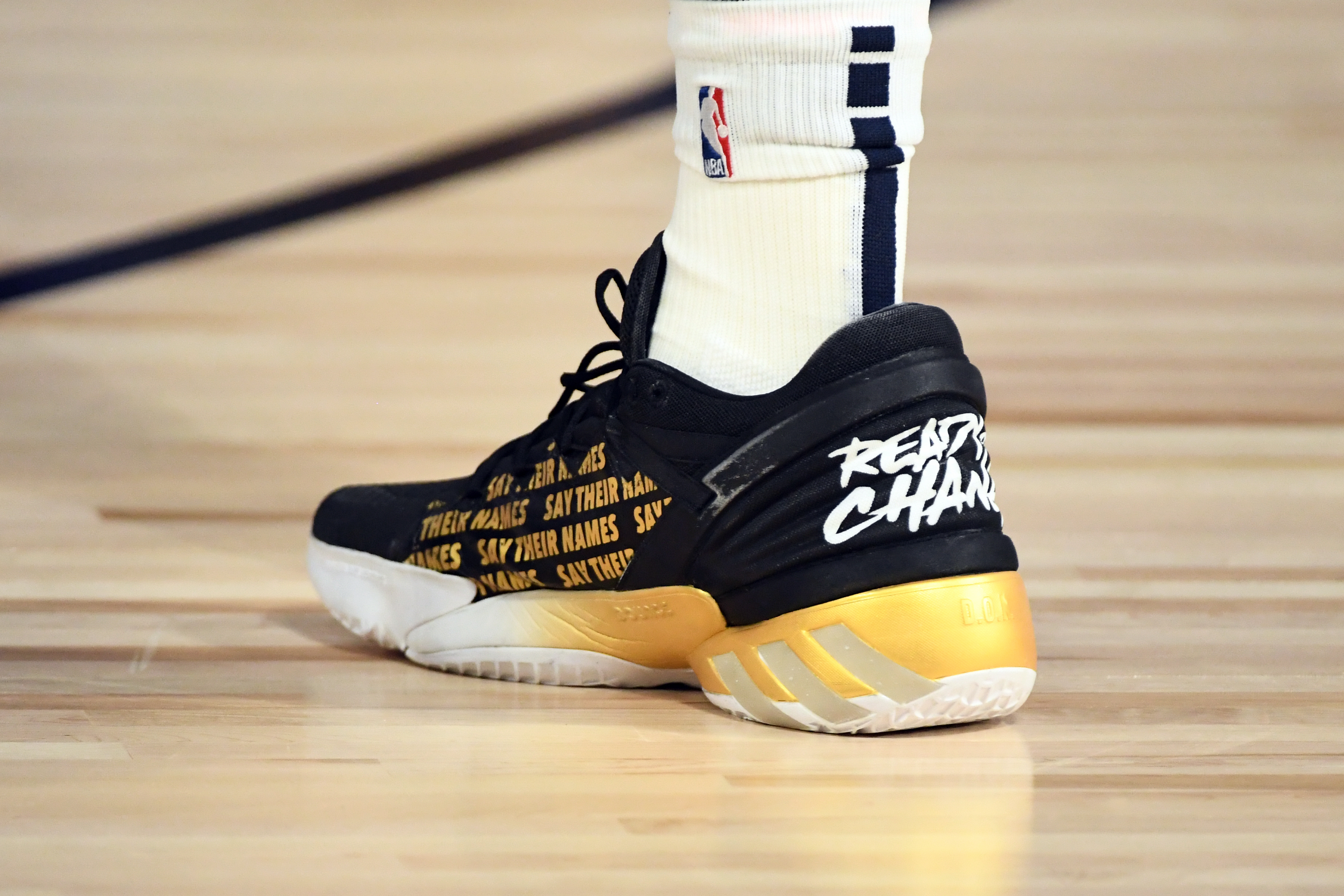 The sneakers worn by Donovan Mitchell of the Utah Jazz during a game against the New Orleans Pelicans on July 30. (Getty Images)

“Ready For Change” / “Say Their Names”

When the league’s regular season was abruptly halted on March 11, there was an additional impact on the sneaker brands, which often plan out their players’ pairs as much as a year in advance. With a shifting game calendar now delayed and veering into the summer, Adidas knew players would also look to highlight a unifying message in the wake of the nationwide charge for social justice and equality.

Through open conversations with their athletes, the brand landed on hurrying to create custom white, black and gold accented-painted pairs for all of their NBA and WNBA players, reading “Ready For Change” in an oversized font. Several pairs also incorporate a repeat print reading, “Say Their Names.”

“Everybody had a pretty strong message [suggestion] and one area where we all agreed [would be impactful] would be to give acknowledgment to those who we’ve recently seen the injustices happen to,” said Rashad Williams, Adidas Basketball senior director of footwear. “We knew they were going to be making their own statements as well. We’ve seen Dame [Lillard] in Portland on the front line protesting and marching.”

“I think the biggest thing that’s been going on in this world is just sparking the conversation, and then acting on it,” said Mitchell. “I’m blessed to be a part of it, to continue to create that conversation – the uncomfortable one – that we’ve been avoiding for a very long time.”

With a complementary jersey message reading “Say Her Name,” Mitchell has continually aimed to be one of the more outspoken athletes in the bubble, during a time in which his shoe is the only new Adidas sneaker launching.

“This has been going on for so many years, and now we’re ultimately fed up with it and tired of it. That’s what ‘Ready for Change’ is,” said Mitchell. “In order for change to happen, you have to be uncomfortable.”

Since receiving his own Jordan signature sneaker series more than a decade ago, the Oklahoma City Thunder’s Chris Paul has long made a point of channeling inspirations from his family and upbringing to help fuel his career and tell his story. His earliest “CP3” pairs incorporated tributes to his parents, wife and brother CJ, while subtle Chevron badges honored his grandfather Nathaniel Jones, the first African American to own a gas station in North Carolina, dubbed “Jones’ Chevron.”

This season, the Thunder’s resurgent 34-year-old point guard found inspiration, comfort and solace from a familiar place, resulting in his first All-Star season since 2016.

“I listen to gospel music all the time. All day, every day,” said Paul during the league’s hiatus. “Mary Mary has a song that says, ‘I just can’t give up now.’ I listen to it all the time. I was working out this morning at 5 a.m., and had gospel music playing because I grew up in the church.”

Released in 2000 on the group’s Thankful album, the Mary Mary song has been a longtime favorite of Paul’s.

“When I write ‘Can’t give up now’ on my shoes, that’s literally from that song,” he added.

The first verse outlines his approach as he and the Thunder prepare to face his former team, the Rockets, in what is expected to be a closely contested 4-5 seed playoff matchup of the opening round.

“There will be mountains

That I will have to climb

And there will be battles

That I will have to fight

But victory or defeat

It’s up to me to decide

But how can I expect to win

If I never try”

After beginning to write just the song lyrics at the start of the regular season last fall, Paul’s player exclusive pairs in the bubble have also taken on even more added meaning. Each game, he’s worn a new colorway highlighting the school name and mascot of a different HBCU, while also adding a tribute to Taylor.

Just weeks after Kobe Bryant’s tragic passing earlier this year, Suns guard Devin Booker got his very first tattoo. The script tagline across his right forearm was a charge from Bryant himself, who gave a pair of his Kobe 11 sneakers “to the young gun” after their final game against each other in 2016.

Ever since that memorable rookie season matchup, Booker has taken Bryant’s challenge to heart: “Be Legendary.”

In each of the Suns’ eight seeding games this summer, Booker wrote the phrase along the sides of his Kobe 5 Protro player exclusive pairs.

“Kobe’s with me every day,” said Booker during a postgame interview, while wearing a Kobe shirt. “That’s a reminder for me. … Through 24 hours, at least two or three times a day, it crosses my mind, if not more.”

He went on to average 30.5 points in under 34 minutes per game, while leading the playoff longshots to an impressive, undefeated 8-0 record. An MVP runner-up to Lillard during the seeding games, Booker was also unanimously named to the All-Bubble First Team, as the 23-year-old continues to look to carve out a legendary career ahead. 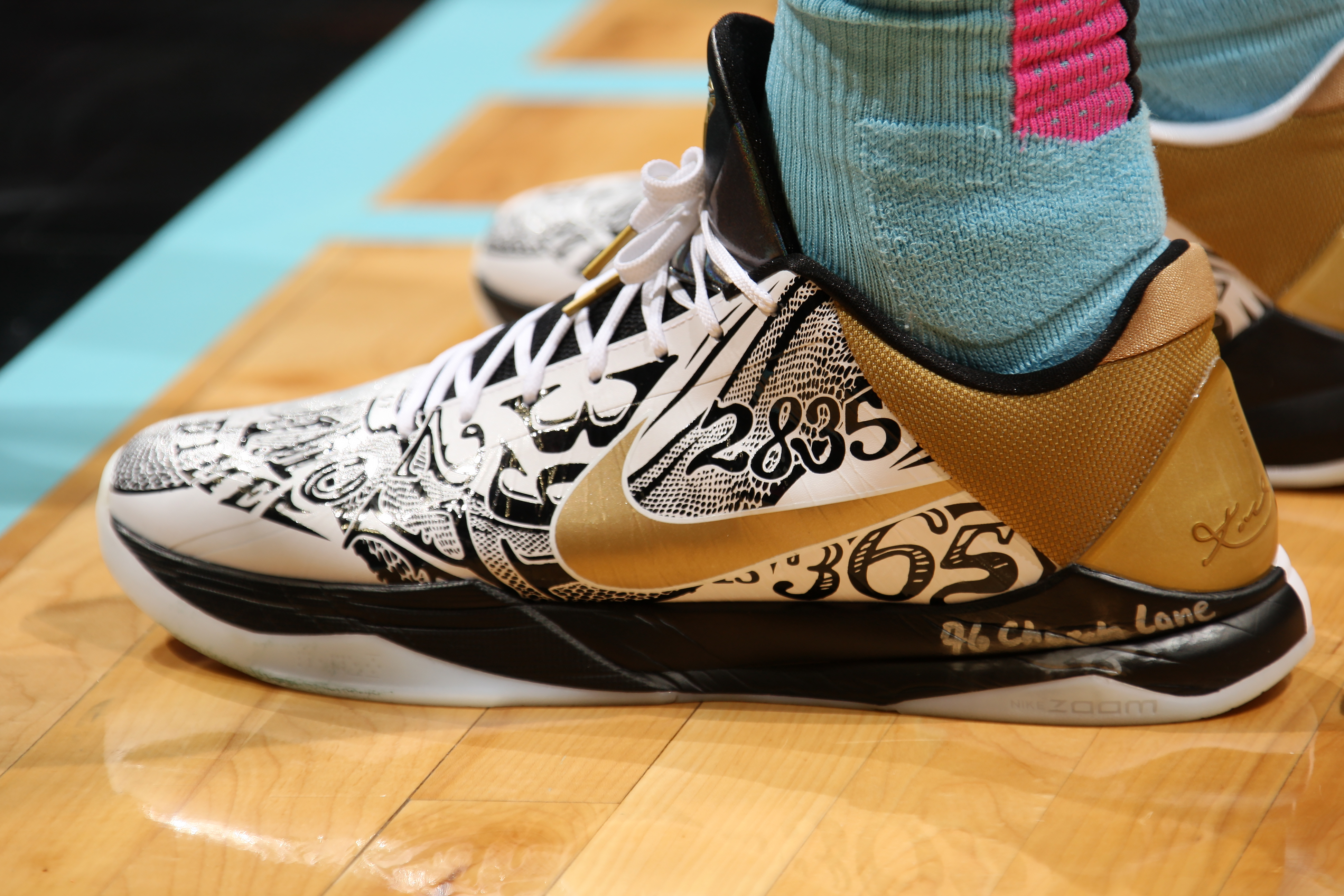 The sneakers worn by Bam Adebayo of the Miami Heat against the Milwaukee Bucks on March 2. (Getty Images) 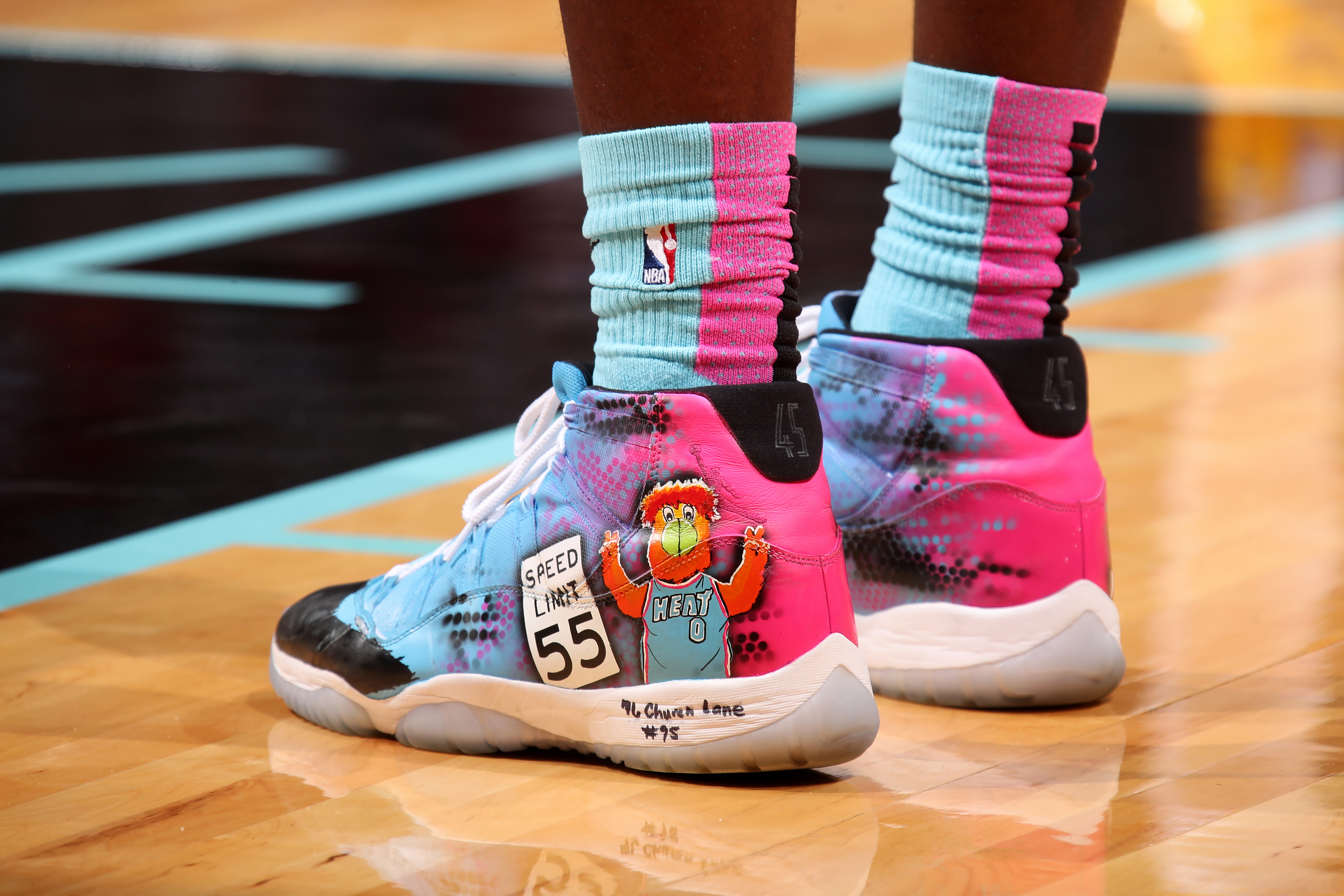 The sneakers worn by Bam Adebayo of the Miami Heat during a game against the Los Angeles Lakers on Dec. 13, 2019. (Getty Images) 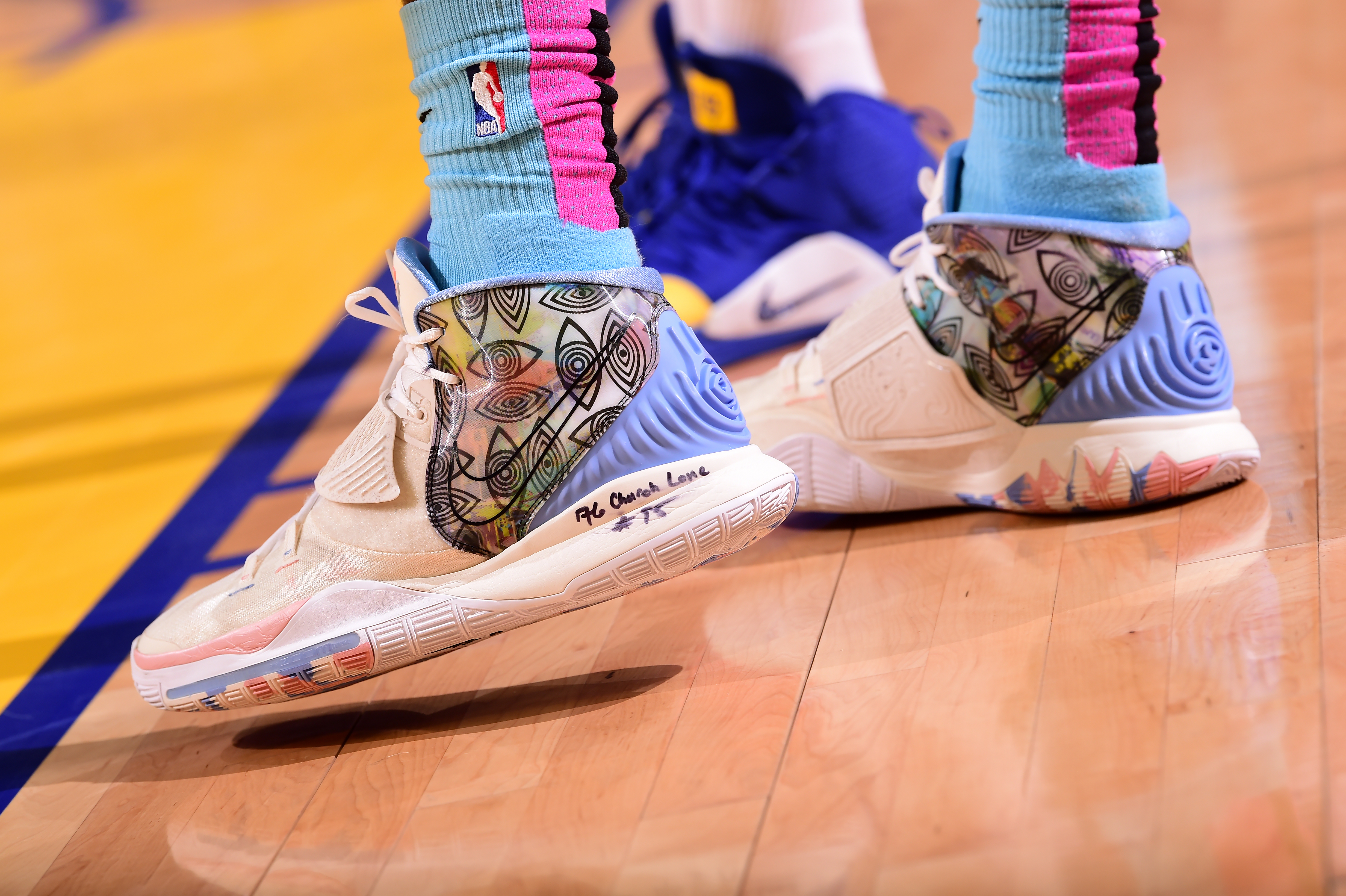 The sneakers worn by Bam Adebayo of the Miami Heat against the Golden State Warriors on Feb. 10. (Getty Images)

While several players have their own signature sneakers or player exclusive colorways of the industry’s latest and greatest, Miami Heat center Bam Adebayo is one of the more unpredictable sneakerheads across the entire league.

One night, he can be spotted in a gleaming red customized Air Jordan XI Retro that matches the Heat’s standard uniforms. Another, a purposely clashing, mismatched pink and neon pair of Kyrie Irving’s fourth Nike model, just because. At other points of the season, the third-year versatile big can shift from a more simple white, black and gold Kobe Bryant pair to a cartoonish custom painted pair the very next game.

There is one ever-present element on each of his sneakers, though, as Adebayo’s handwritten reminder of the single-wide trailer home in North Carolina he and his mother Marilyn lived in at 76 Church Lane can always be found on the heel.

“I feel like that street made me,” he said at the start of the regular season. “That’s where I became Bam the basketball player. That’s always got a piece of my heart.”

After flying under the radar as a rookie, the 6-foot-9 big man’s game has taken yet another huge leap in his third year, with Adebayo serving as the engine of the fifth-seeded Heat’s switchable defense and a playmaker on the other end. The first-time All-Star is also a finalist for the NBA’s Most Improved Player award, with a potential max contract extension awaiting him this fall.

He and his mother have come a long way from 76 Church Lane.

“I know where I come from and what she’s been through,” he said, “and I’m not the type of person who is going to get cocky about it.”