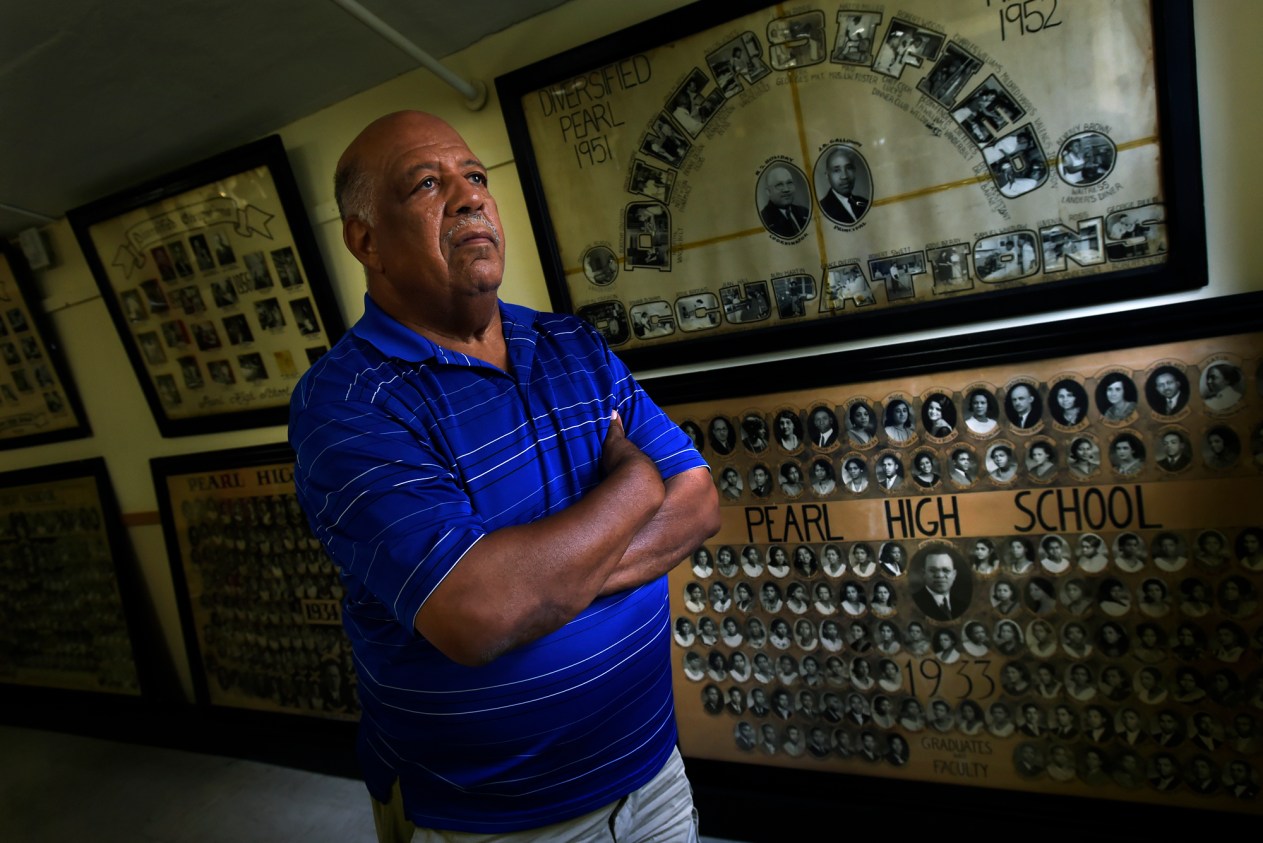 Melvin Black stands in one of the school’s original two locker rooms, which were were remodeled to showcase historic photos and other items from the school on Monday, July 11, 2016, in Nashville, Tenn. Pearl High School was closed in the late 80s and reopened as MLK Magnet School. Mark Zaleski for The Undefeated
Pearl High School

The legacy of Pearl High School and its success during segregation

Museum offers a rare glimpse of black schools before integration

The first thing you notice when entering Melvin Black’s closet-sized office beneath the seats in this old high school gymnasium are the five bottles of Windex.

On the way to explaining his need for cleaning products, the 80-year-old Black leans back in his chair, closes his eyes, and recalls a complicated part of Nashville, Tennessee’s, history: a time when Jim Crow and a segregated school system didn’t crush a community, but instead inspired a purposeful resistance, and greatness in both academics and athletics.

Black attended and later taught history in this building, the former Pearl High School. For half a century, it was the only black high school in the city. Every day, 1,500 students made their way to class, some after walking several miles across town to get here. Black remembers former principal J.C. Hull standing in the hallway in his brown suit, welcoming students with his arms folded in front of his chest. And he can still hear the “Woomp Show,” the raucous pregame routine when the Pearl High basketball team would come running out to the tune of Sweet Georgia Brown and every last Tiger would dunk the ball, the crowd shouting, “Woomp! Woomp! Woomp!” with every jam.

Finally, Black opens his eyes and tells you why he has those five bottles of Windex: He maintains what historians and archivists describe as a rare and valuable museum of artifacts from the era of segregated education so that others may see what this school once meant to the entire black population of this Southern capital.

“This has tremendous historical significance as it relates to blacks being able to be educated in the days prior to integration,” Black said. “There either weren’t high schools [for blacks] or children would often drop out after second or third grade. Pearl represents an important and difficult road traveled by so many individuals.”

He worries, though, that the road may be coming to an end and that this important collection may not survive him.

The art deco script etched into the front of this building still reads PEARL HIGH SCHOOL, but the modern marquee on the street corner lets a visitor know this place is now known as Martin Luther King Jr. Magnet High School. (The red brick structure was built in 1937, replacing an earlier building.) Just like Pearl, MLK Magnet is highly regarded for its academics, now drawing just over 1,100 students from across the city to what U.S. News & World Report ranks as the second-best public high school in the state. But its demographics are far different from the old Pearl days, with a student body that is 42 percent black, 42 percent white, 11 percent Asian and 5 percent Hispanic or other.

When teachers try to explain the significance of this place, they take students on a field trip behind the old gymnasium.

It is here, in two former locker rooms next to Black’s tiny office, where the Pearl High Archives are kept. These bright white rooms are open by appointment only, which means at class reunions or whenever somebody calls Black and asks for a tour. A retired teacher, coach and local councilman, Black, Class of ’55, has made it his mission to keep this hidden museum intact.

The collection includes class photos dating to the school’s founding in 1898, when the children of slaves were among Pearl’s first graduates. There are pictures of former principals such as G.E. Washington, grandfather of civil rights leader Julian Bond, and of teachers, many of whom studied under legends such as Booker T. Washington and W.E.B. DuBois and set the highest standards for their students. A green, faux-leather scorebook, creased and bent by time, includes a page from Jan. 4, 1965, when Pearl’s basketball team lost on a last-second shot to Nashville’s Father Ryan High School, the first time a black school played a predominantly white school in the South. A four-foot-tall state basketball championship trophy from 1966 marks the season when the Tigers went undefeated and won the South’s first integrated high school tournament. Across the way is an oil painting of Perry Wallace leaping high for a rebound in the ’66 state championship game, just months before he made history as the first African-American basketball player in the Southeastern Conference. In a glass case is a spiffy red, white and black suit from 1949, the band uniform of the Marching 100. Next to it is a plaque commemorating the National Negro High School Basketball Tournament, which brought the greatest black teams in the country to Nashville every year from 1945 to 1964, a tournament Pearl won four times.

The backbeat to all of this, as Black explains to the students who visit, is the ugliness of segregation. While alumni may feel tremendous pride and nostalgia for their old school, there is no longing for any “good old days” in Nashville. Without segregation, there was no great Pearl High. Then integration comes along and speeds the demise of a strong black institution, which closed in 1983. What’s good and what’s bad? This museum puts it all in context.

The first time Graham Perry, curator of social history at the Tennessee State Museum and a specialist in African-American history, saw this collection of artifacts, he was stunned. He’d run across historical markers for old segregated schools across the South, personal collections in small Tennessee towns, and display cases in school lobbies. But the Pearl collection is on another scale, he said. Its value far exceeds satisfying the nostalgic urges of former students. Museum curators of the early- to mid-20th century were products of the environments in which they lived, he said. In the South, especially, that often meant they had little interest in black history.

“The fact that these items at Pearl are preserved at all is incredible,” Perry said. “A historian like me is backtracking for things like this for our own state museum, because we only have glimpses. In the former segregated world, they didn’t collect much except for what fit into the narrative of the white part of segregation. But this school is an example of something distinctly created by African-American communities that gave it a sense of purpose. W.E.B. DuBois spoke of the veil that separates the races. This archive includes that other missing piece of the puzzle that whites didn’t see.”

A collection of this size and scope is not just a Nashville treasure, said Ken Goings, a professor in the African-American and African Studies department at Ohio State University and former chair of that department. He says it’s significant in a national context – collections like this are nearing extinction.

“I can tell you without a doubt that the museum honoring Pearl High School is unique,” he said. “As the black high schools were integrated into the county or city school systems, in most cases everything from the black high school was just thrown out.” Not only that, he said, “younger people rarely have the kind of interest in the segregated schools that it would take to build and maintain such a museum and, unless this one is incorporated into a larger one, I suspect its days are also numbered. Not only are the histories of these black high schools being lost, I study the history of HBCUs [historically black colleges and universities] and that history is also being lost.”

As was the case in many Southern cities, the desegregation of Nashville’s public schools was accomplished only after black parents and attorneys pressed the issue and whites responded with violence. Dynamite exploded on the first day of school at Hattie Cotton Elementary in 1957 when the city’s public schools were first integrated. But after initial bouts of violence and confrontation, the city became known for a gradual brand of integration. “The Nashville Plan” called for one grade at a time to be integrated (first grade in year one, second grade the next year, and so on), and by 1971, the first white students enrolled at Pearl.

When Pearl closed in 1983 (to be revived three years later as the MLK magnet school), Black said many of the items in his museum were indeed headed for “File 13,” his term for a parking lot dumpster. But a group of Pearl alums from the 1940s, led by Ted Lenox, a postal worker who had played on the Pearl basketball team, organized a campaign to save the history of their school. A school board proclamation promises the collection will be maintained in perpetuity, and there are plans to remodel and expand the museum.

But Black and many other alumni remain skeptical of such promises. If File 13 was an option once, it could be again someday. Perry said he once saw the entire historical record of a small town in Arkansas sent down a trash chute. “It happens all the time,” he said.

Black worries that once the generation of students who attended Pearl during the school’s glory days have died, there may not be anyone left to carry on his work. He’s tried for years to entice younger people to help maintain the museum, but has found little interest.

But this museum-keeper recognizes there are other ways to extend the legacy of a special institution. Each year, he rounds up a few Pearl alumni and visits an elementary school classroom, bringing along dominoes to teach math, running a spelling contest, and sharing stories of life’s ups and downs. “It’s not just a museum to me,” Black said. “We’re out in the community trying to bring the old Pearl spirit with us.”

There should be a term for it, the transformation that occurs when the people who lived through an era are no longer around to tell their stories firsthand, when pivotal events become things only written or talked about by people who weren’t there to feel them. What is lost during that transformation, what does it mean for our collective memory, for the future?

Goings said this phenomenon is particularly relevant for ethnic and racial minorities. “As succeeding generations become more acculturated into society, they tend to not want to remember the struggles of the past,” he said. “There are generally two ways to remember history: through the participants’ memories or through physical objects. For African-Americans, unfortunately, both are being lost as younger generations are not seeing the value of knowing their own history. We are in danger of losing our history, or having it distorted by those who claim they know it.”

For Perry, the professional curator, this dilemma is a familiar one, and it hints at the ephemeral nature of life itself.

“In the museum field, we always say we’re prolonging the inevitable anyway,” he said. “Everything is going to return to dust.”

Until that day, pushing the inevitable as far away as he can, there’s Melvin Black and his Windex.