The improvement Giannis made to give Milwaukee momentum

Antetokounmpo stopped committing charges and the Bucks are better for it

With less than five seconds remaining in the third quarter of Game 2 of the NBA Finals, with his team down 88-78, Milwaukee Bucks forward Giannis Antetokounmpo sprinted up the court in an attempt to cut the Phoenix Suns’ lead to single digits.

Antetokounmpo pushed the ball up the left side of the court, made a cut to the right, and then immediately shifted back to the left as he reached the free throw line, where Suns defender Torrey Craig was waiting. As Antetokounmpo lowered his shoulder and made a beeline for the basket, no doubt attempting to dunk the ball or lay it in before time expired, Craig stayed lockstep with him, shuffling his feet as Antetokounmpo inched toward the basket. Seconds later, both Antetokounmpo and Craig were sprawled across the hardwood court.

The referee made the signal: charge.

That sequence by Antetokounmpo in Game 2 mirrors a problem the 26-year-old has faced the past few seasons of his career: aggressively attacking the basket only to be called for an offensive foul. For a player whose points mostly come from fast breaks and getting into the paint, Antetokounmpo has sometimes lacked speed control and balance, which has led to him being whistled for charges more than any other player in the league.

Since the 2017-18 season, Antetokounmpo leads the league in charges called against him at 181, which is 44 more than the next closest player (Karl-Anthony Towns), according to Second Spectrum. Antetokounmpo’s inability to avoid being whistled for charges has impacted his ability to stay on the floor. Since the 2017-18 season, he’s tied for fourth in the league in number of times fouled out (15), according to ESPN Stats & Information.

Through this season’s playoffs, Antetokounmpo has proven how integral he is to the Bucks’ success at the end of games. The game-sealing block of Deandre Ayton and alley-oop from Jrue Holiday don’t exist if Antetokounmpo was battling foul trouble as he has in the past. And because Antetokounmpo has been on the court for those plays late in the fourth quarter, illustrates just how much he’s getting his charging problems under control as the Bucks attempt to win their first NBA championship since 1971 heading into Game 6 with a 3-2 series lead.

What’s failed Antetokounmpo in the past has been a lack of patience and trying to do too much at once. Antetokounmpo is clearly at his best getting to the rim, so he treats his opponents as obstacles to run through rather than around. If Antetokounmpo wasn’t using a Eurostep to avoid defenders, he at times lacked the balance, change-of-direction and control to get around his defenders, which normally ended in the defender getting to the spot he knew Antetokounmpo was headed to, and Antetokounmpo barreling over him. After a while, defenses anticipated which direction Antetokounmpo would take on his drives, and when and where he’d use his spin move, and almost goaded him into running them over.

“I mean, you really just have to really rely on your shifts,” said Ayton, who has been in foul trouble in two out of the last three games due in part to guarding Antetokounmpo. “Just try to meet him early to avoid all of that contact and him really putting pressure on the rim. It’s just seeking him out early and sliding your feet, showing your hands early before he attacks you, before he throws a dribble out in front of you. Make sure everyone is back on defense showing him a wall and everybody is ready to rotate.”

But in this year’s playoffs, Antetokounmpo has cleaned up the offensive fouls. While he is still tied for the lead in charges during the postseason with seven, the player with the same number of charges, Philadelphia 76ers center Joel Embiid, has played in nearly half as many games (11) as Antetokounmpo (20). Instead, when looking at charges per 100 possessions, Antetokounmpo ranks 16th of out 57 (72nd percentile) among players with at least one charge, according to Second Spectrum. In the regular season, for players with at least four charges (113 players), Antetokounmpo ranked second (98th percentile) in charges per 100 possessions.

Antetokounmpo has improved not by being less aggressive, but by finding better shots.

In the early minutes of the first quarter of Game 5 in Phoenix, Antetokounmpo had an isolation on the left side of the court with Ayton defending. Antetokounmpo drove toward the baseline, bumped Ayton twice, pump-faked and went under the basket for a reverse layup. No unnecessary dribbles. No full-steam ahead. No running Ayton over. Antetokounmpo scored the basket without drawing a charge.

“I saw the angle, I saw the space,” said Antetokounmpo, who joked that his game is speed, “not power.” 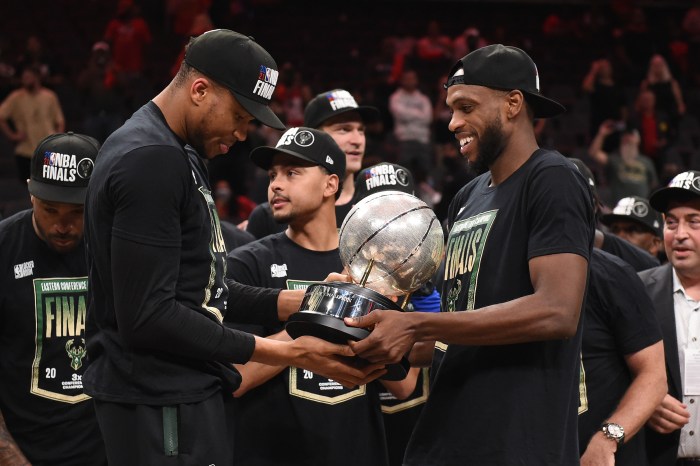 From #Bucksin6 to winning in six: The Bucks’ path to the NBA FinalsRead now

Antetokounmpo’s shot profile has not changed that much in these playoffs, or even over the past three seasons. In this year’s playoffs, nearly half (45.2%) of Antetokounmpo’s shot attempts are at the rim, according to data from Basketball-Reference, mirroring his frequency in the regular season (45%). He attacks the rim at the same frequency in these playoffs (16.6 drives per 100 possessions) as he did in the 2020-21 regular season (16.1), and during the regular and postseason from 2017-18 to 2019-20 (16.4), according to Second Spectrum.

What has changed in these playoffs is Antetokounmpo’s production in the midrange. More than 13% of his shots are coming between 10 and 16 feet, up from 9.4% in the regular season. And while Antetokounmpo’s 3-point shooting is a source of criticism, he’s hitting from the midrange area: He’s converting on 45.5% of shots between 10 and 16 feet in the playoffs, up from 35.9% in the regular season.

What’s also helped is Antetokounmpo’s trust in his teammates. Before Game 4, Antetokounmpo said that in the past, when confronted with defenses tailored to stop him, he would want to prove he could beat the defensive schemes, possibly to the detriment of the team. He now understands that being effective isn’t necessarily about scoring the most points, but rather making the right plays to put your team in a position to win. That’s been reflected in both this series and the playoffs at large: Antetokounmpo’s foul against Craig is the lone charge called against him through five games of the Finals, the last three of which were won by Milwaukee.

“He is keeping the defense honest where they can’t always load up on him because now they know he will pass it,” said Bucks forward Khris Middleton. “He will kick it to his teammates and allow them to play some. So they can’t really load up on him as much as they used to, knowing he’s just going to try to barrel his way to the rim.”

Coach Mike Budenholzer has also made it easier for his star forward. After Antetokounmpo ran into walls the past two years against Toronto and Miami, Budenholzer adjusted the Bucks offense this season to feature more picks and screens to free him from having to constantly face three defenders away from the basket.

Unlike in the past, Antetokounmpo doesn’t have to always gun it for the rim. He can set picks and screens. He can, as he did for most of his six assists in Game 5, wait for defenses to collapse on him and kick it out to a wide-open shooter. He can set up shop in the paint and showcase his improving low-post moves. Antetokounmpo has even added a floater and Dirk Nowitzki-style one-legged fadeaway to his arsenal that are starting to round into form.

“It’s mostly Giannis growing and evolving. He’s a very, very smart player,” Budenholzer said. “There’s a lot of areas where I think his game is maturing or has matured, and I think that’s like a tangible one that you can feel. I think he’s comfortable getting to a lot of different spots. Hopefully, the players around him are helping.

“It’s just, I think, a growth. Some conversations with coaches, film, all that, emphasizing spacing for him, for us. It’s a little bit of all that. But it’s mostly Giannis.”