Playwright and composer Michael R. Jackson marries the Black church and Stephen Sondheim – and it works

By Soraya Nadia McDonald @sorayamcdonald
May 13, 2022

The 2020 winner of the Pulitzer Prize in drama now also boasts a season-high 11 Tony nominations, including for best musical, along with recognition for lead actor Jaquel Spivey, and featured actors John-Andrew Morrison and L Morgan Lee, the first transgender person to receive such a nomination.

This “big, Black, queer-ass American Broadway show,” as Jackson calls it, is about a writer named Usher who pays his rent by, yes, ushering for the Broadway production of The Lion King. In the meantime, he works on his own musical called A Strange Loop and tries to navigate the sexual marketplace of New York. In both arenas, Usher’s already-waning self-confidence has been beaten down by repeated rejection. Usher’s been muddling through ambitions and fears at work for so long that the characters he sees every night in The Lion King have fused, in his psyche, with the characters in his own life. And none of them have much good to say about Usher. 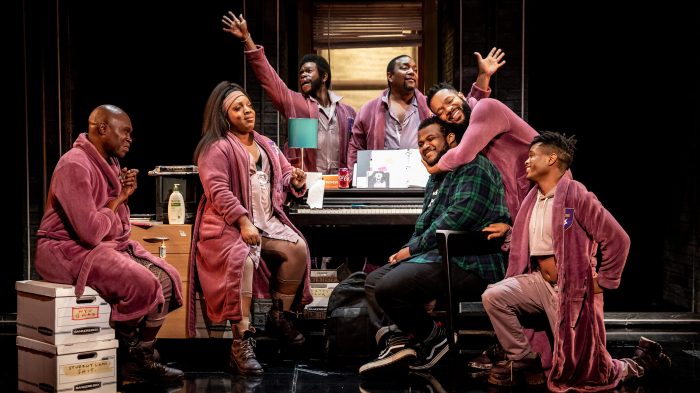 But the great villain of A Strange Loop is not Usher’s father, who drinks too much. It’s not his mother, who is so focused on whether or not her gay son is going to hell that she struggles to offer comfort in the way that he needs it. It’s not the exploitative hookup partner in Upper Manhattan who uses Usher’s body as a receptacle for his own unexamined bigotry. It’s not Agent Fairweather, who pushes Usher into ghostwriting for an overbooked Tyler Perry even though Usher finds the prospect repugnant.

Rather, it’s Usher’s subconscious and the six extraordinarily loud, ever-present voices that occupy his brain, identified as Thought 1, Thought 2 and so on, up to six. Throughout the play, the actors who play Usher’s thoughts shape-shift — into his mother, his father, his agent, even his hallucinations. For actors, it’s a work that demands quickness and malleability, since the costumes for the Thoughts remain mostly consistent throughout the show. Making these renderings distinct relies heavily on their skills, and the company pulls it off with aplomb.

He explains their relationship in the musical’s opening monologue:

“In the background, there will be a young overweight-to-obese homosexual and/or gay and/or queer, cisgender male, able-bodied university-and-graduate-school educated, musical theater writing, Disney ushering, broke-ass middle-class politically homeless normie leftist Black American descendant of slaves who thinks he’s probably a vers bottom but not totally certain of that obsessing over the latest draft of his self-referential musical A Strange Loop! And surrounded by his extremely obnoxious Thoughts!”

When Jackson began writing that monologue, it was 2003. The national midterm elections the following year, you may remember, revolved around a boogeyman created by Karl Rove, an adviser to then-president George W. Bush: same-sex marriage.

Since then, the country witnessed the election of its first Black president. American queer people moved closer to full citizenship, with the Supreme Court upholding same-sex marriage in 2015. And it has also experienced a backlash that threatens to erode fundamental rights. Nearly 20 years after Jackson first wrote that monologue, it’s still dangerous to be living in a fat, Black, queer body like Usher’s. The scare tactics of singer Anita Bryant have risen once again, like zombies.

So yes, A Strange Loop carries political significance within its deeply personal story. But what makes it sing? Magnetic, deeply comic performances from each of its seven cast members. Spivey, Lee and Morrison were recognized with Tony nominations, but they could just as easily have gone to James Jackson Jr., who voices Usher’s self-loathing with all the familiar contempt of TV talk show host Wendy Williams, John-Michael Lyles, the show’s resident peppy twink, Jason Veasey and Antwayn Hopper, the sonorous bass notes of the ensemble. Veasey brings compassion to his rendering of Usher’s father and his casual cruelty, while Hopper constantly nudges Usher toward compromising on his principles because he’s got to do something “about this situation with S—tybank Student Loans!” 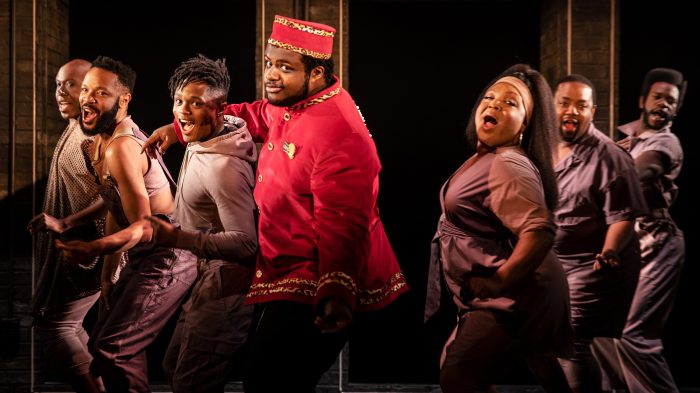 ‘A Strange Loop’ is ushered to BroadwayRead now

Similar to Anaïs Mitchell’s Hadestown, another off-Broadway darling that successfully transferred, it’s possible to see how A Strange Loop has flourished, adjusted and adapted over the course of its development.

The show, in so many ways, is a time capsule of the 2000s and 2010s. Previous iterations have included references to Lucious and Cookie of Empire. There’s a Phaedra, whose general messiness — not to mention her name — evokes the drama of Real Housewives. Another lyric, “His Blackness doesn’t look blue in any moonlight, which makes him harder to see,” speaks to the Oscar-winning film and the Tarell Alvin McCraney play that provided the basis for it. Usher’s resentment over superficial celebrations of representation shows up in the dialogue for Thought 6: “Usher! Head of corporate N—atry here! Just checking in to see if you found your unapologetic Blackness yet? ’Cause your numbers are in the toilet with the Black excellence crowd and you’re real close to cancelation! Coon!”

Musical theater, like hip-hop, carries with it traditions of allusion. Within the thematic curlicues of A Strange Loop lurks studious rigor — the outré running commentary of the Thoughts is built on the foundations of Aeschylus, Sophocles and Euripides. Its gospel play within a play recalls lessons on Shakespeare while the staging of said play, awash in glaring, angry red lights and an enormous cross, takes me back to the Book of Mormon’s “Spooky Mormon Hell Dream.” There’s also a dream sequence in which the ghosts of abolitionist Harriet Tubman, essayist James Baldwin, singer Whitney Houston, Black nationalist Marcus Garvey, writer Zora Neale Hurston and enslaved man Solomon Northup (who is simply referred to as “12 Years A Slave”) scare and shame Usher into taking a job writing a gospel play for Perry. It’s brilliant incorporation of a storytelling device that famously made for one of the most memorable scenes in Fiddler on the Roof. 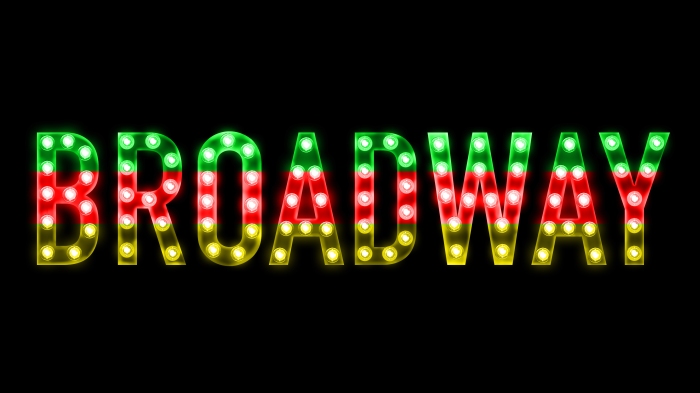 All of that knowledge, packaged into Usher’s loop de loop cycle of neuroses, does the work of both showing and telling, arguing for Usher’s (and therefore Jackson’s) place within the theater as it recounts the numerous ways he’s been rejected by it. A Strange Loop slyly uses Usher’s encyclopedic deployment of identifiable tropes to critique theater-making as an industry. That’s common among playwrights — what writer does not enjoy a good grousing session? Where Jackson shines, however, is in the way he creates a lingua franca that marries the chords and traditions of the Black church, the cheek of the late Stephen Sondheim, the Bard of American musical theater, and the emo indie rocker vibes of Usher’s “inner white girl,” Liz Phair.

And yet, as arch, withering and unafraid as A Strange Loop is, it’s also overflowing with vulnerability and earnestness. Spivey contains a sweetness that belies the acidity of the caustic barbs he delivers. It’s a trait his character shares with Usher’s mother, played by Morrison (Thought 4). Every inch the enthusiastic deaconess, you can hear her anguish as she asks, once Usher has delivered a gospel play the only way he knows how: a raucous, decidedly hostile work, featuring church choir members in sparkling robes and a preacher leading his congregation in singing “AIDS is God’s punishment” over a casket.

“Why do you hate us?” Usher’s mother asks. “… Gettin’ up in front o’ the world and showin’ everybody how much you hate us!”

I first saw A Strange Loop off-Broadway, at Playwrights Horizons with Larry Owens Jr. starring as Usher. You can still hear Owens as Usher in the streamable off-Broadway cast recording, and a Broadway cast recording has been announced. Owens made Usher a bit more slovenly and in obvious need of a dose of selective serotonin reuptake inhibitors. Spivey’s performance offers pleasant surprises as he employs his baby-faced mien with the coy delight of Princess Diana facing the paparazzi in her Revenge Dress. Sure, there’s pathos, but mischief makes itself known with each well-timed smirk and the patient delivery of a line he knows will draw laughs from the audience.