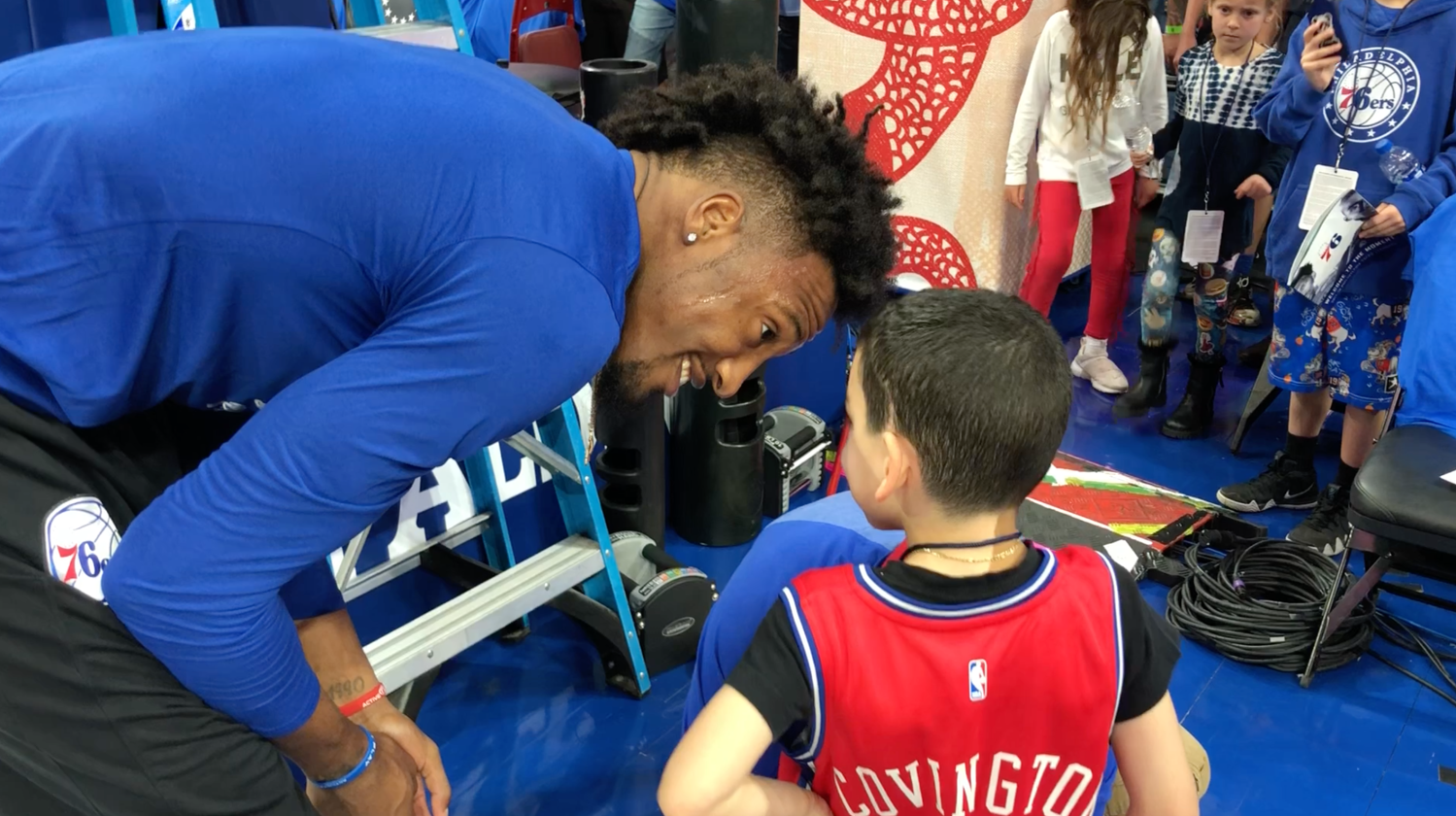 Robert Covington on young Gio Toribio: ‘There’s just a connection that I felt between Gio, I don’t know what it was. But it just drew me to him.’ Photo by Jerry Bembry
NBA

The heartwarming friendship between Robert Covington and young Gio Toribio

t’s a few minutes shy of 11 p.m. when the phone rings in the Toribio home in Ossining, New York. Gio Toribio is rubbing sleep from his eyes. His mother tells him the call is for him.

When young Gio sees the person FaceTiming him, he immediately lights up.

“How you doing, Gio?” says Robert Covington, who’s calling from the Minnesota Timberwolves locker room after contributing 10 points in a win over the San Antonio Spurs on Nov. 13.

After a few minutes of small talk, Gio is given the news: He won’t be going to his third-grade class the following day. And he won’t be making another visit to see a doctor — which is what he had been told by his parents. Gio and his parents, Juan and Lauren, would instead be boarding a morning flight to Minneapolis, where they would be the guests of Covington.

Upon arrival, Gio spent that Thursday with Covington and his family. And on Friday — the day of his eighth birthday — he fed Covington for shots during the team’s pregame warm-ups on the Target Center floor. “It was a lot of fun,” Gio said. “It was great to see Rob.”

Covington was thrilled to see Gio having the time of his life, something that seemed improbable for a kid whose scars on each side of his head hint at the horrific ordeal he has been through. Less than four years earlier, Gio was diagnosed with Stage 3 anaplastic large cell lymphoma.

Gio, when he was only 4, faced a battle with a cancer in an advanced stage.

“It’s a terrible thing, because it can kill people,” Gio said. “It’s very draining. But I’m like the strongest kid.” 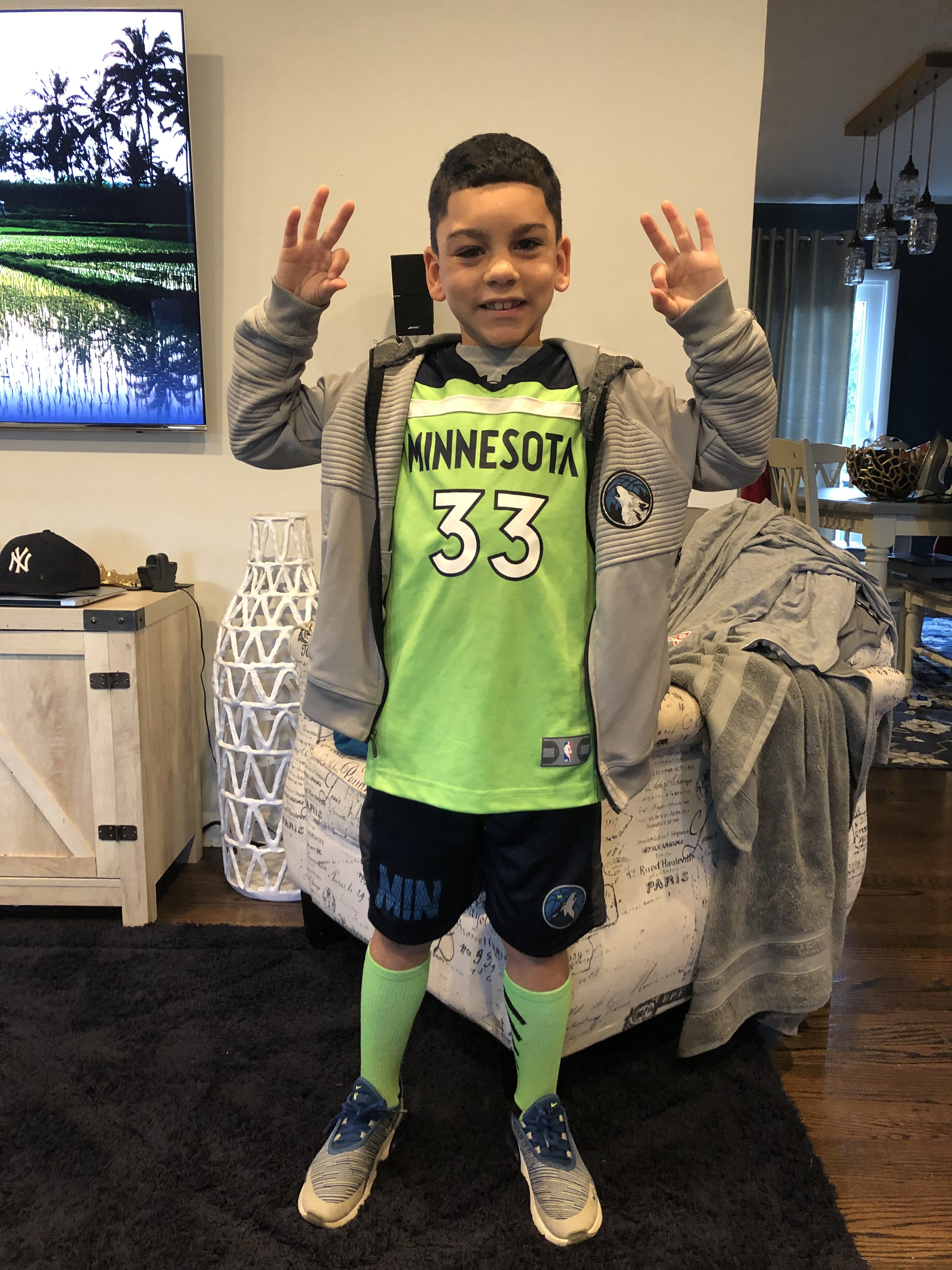 Photos provided by the Toribio family 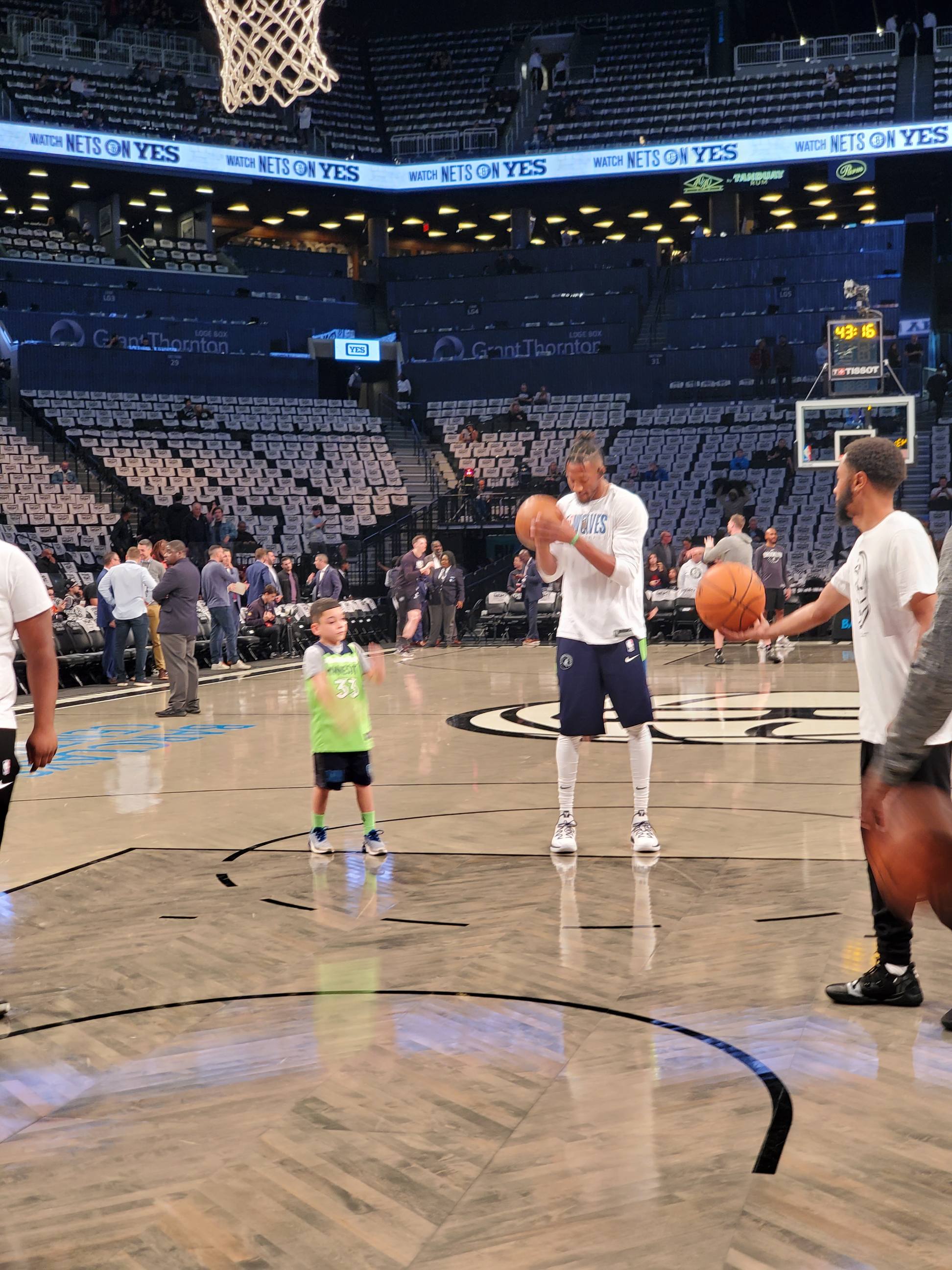 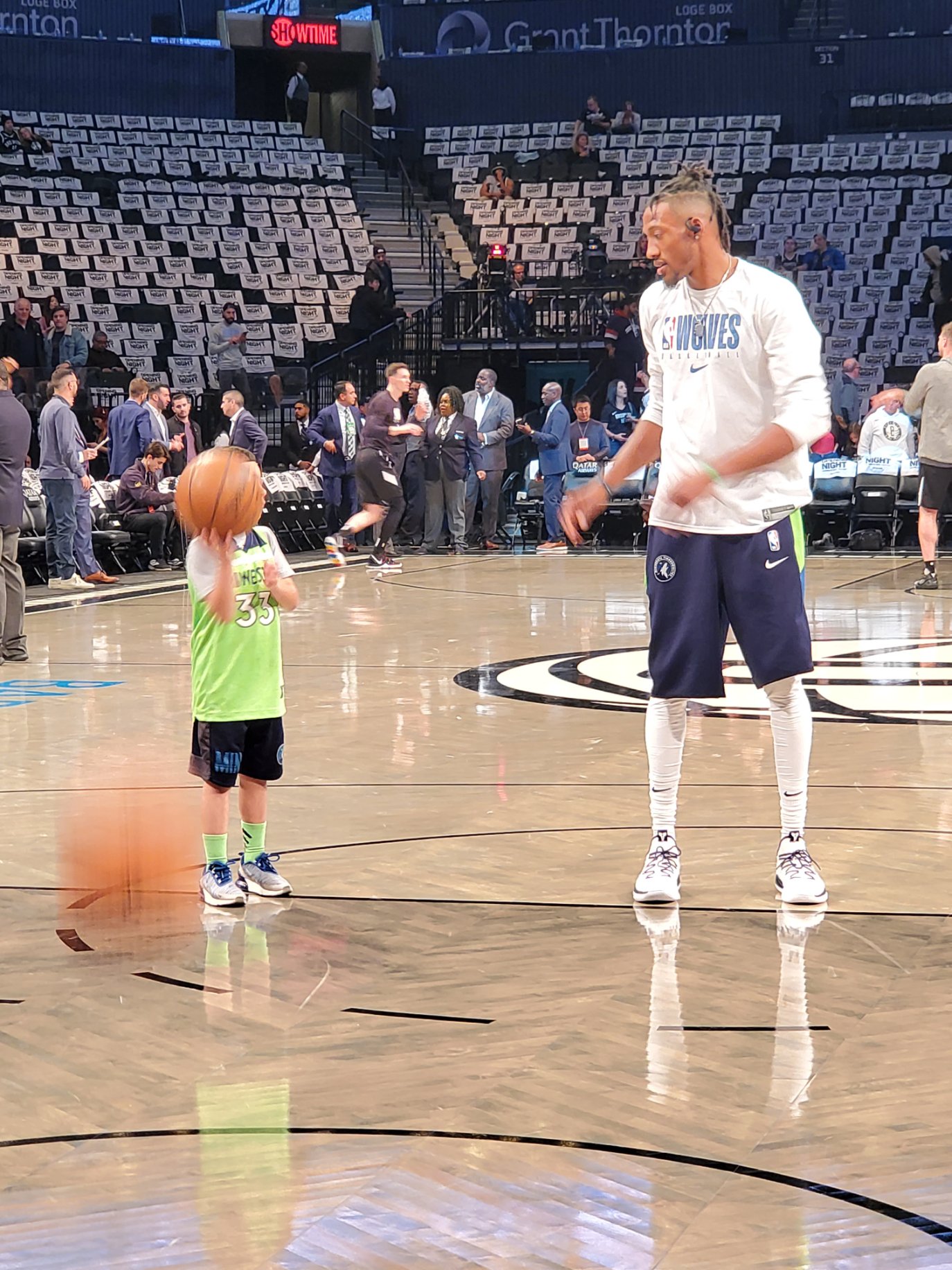 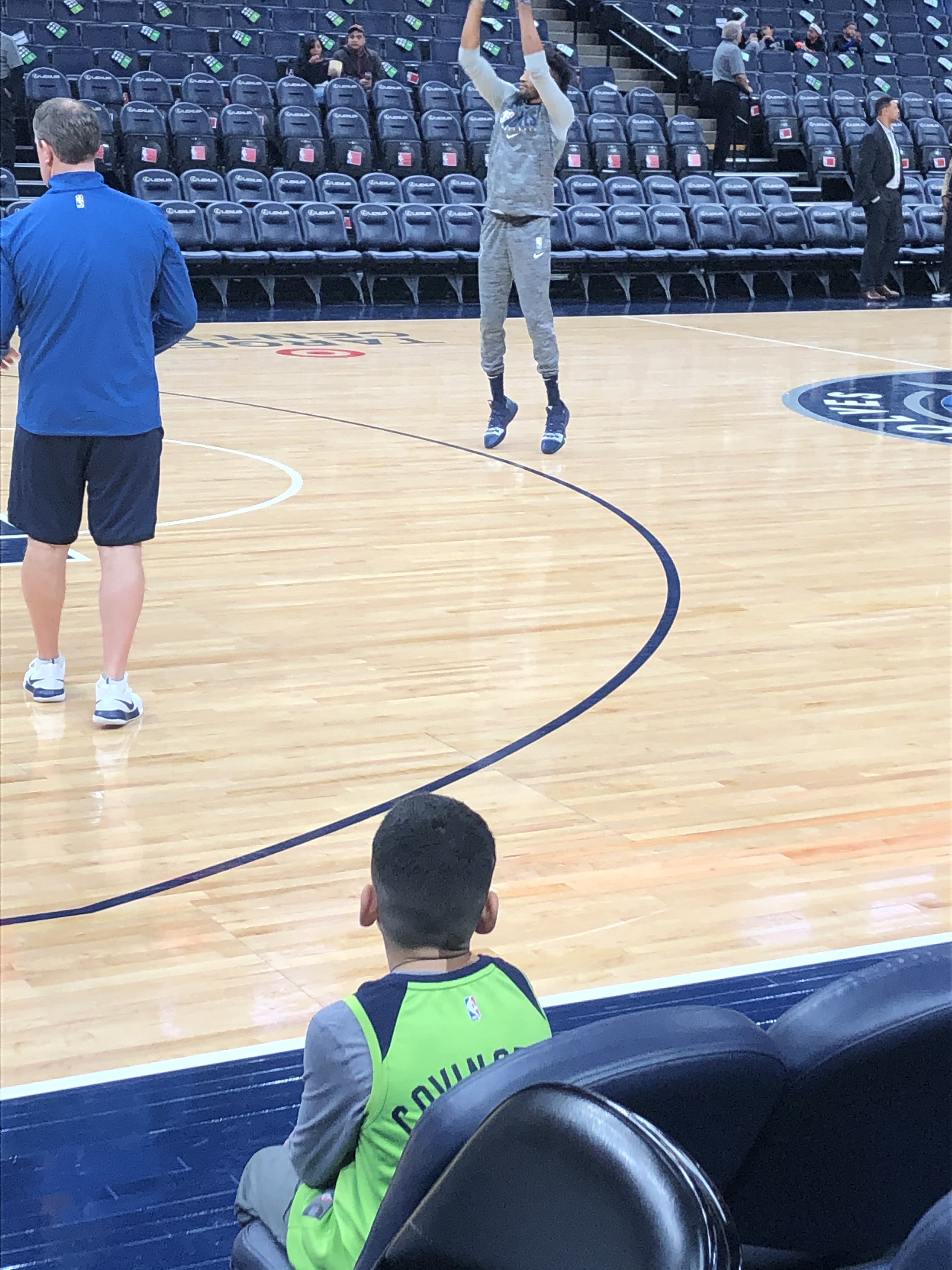 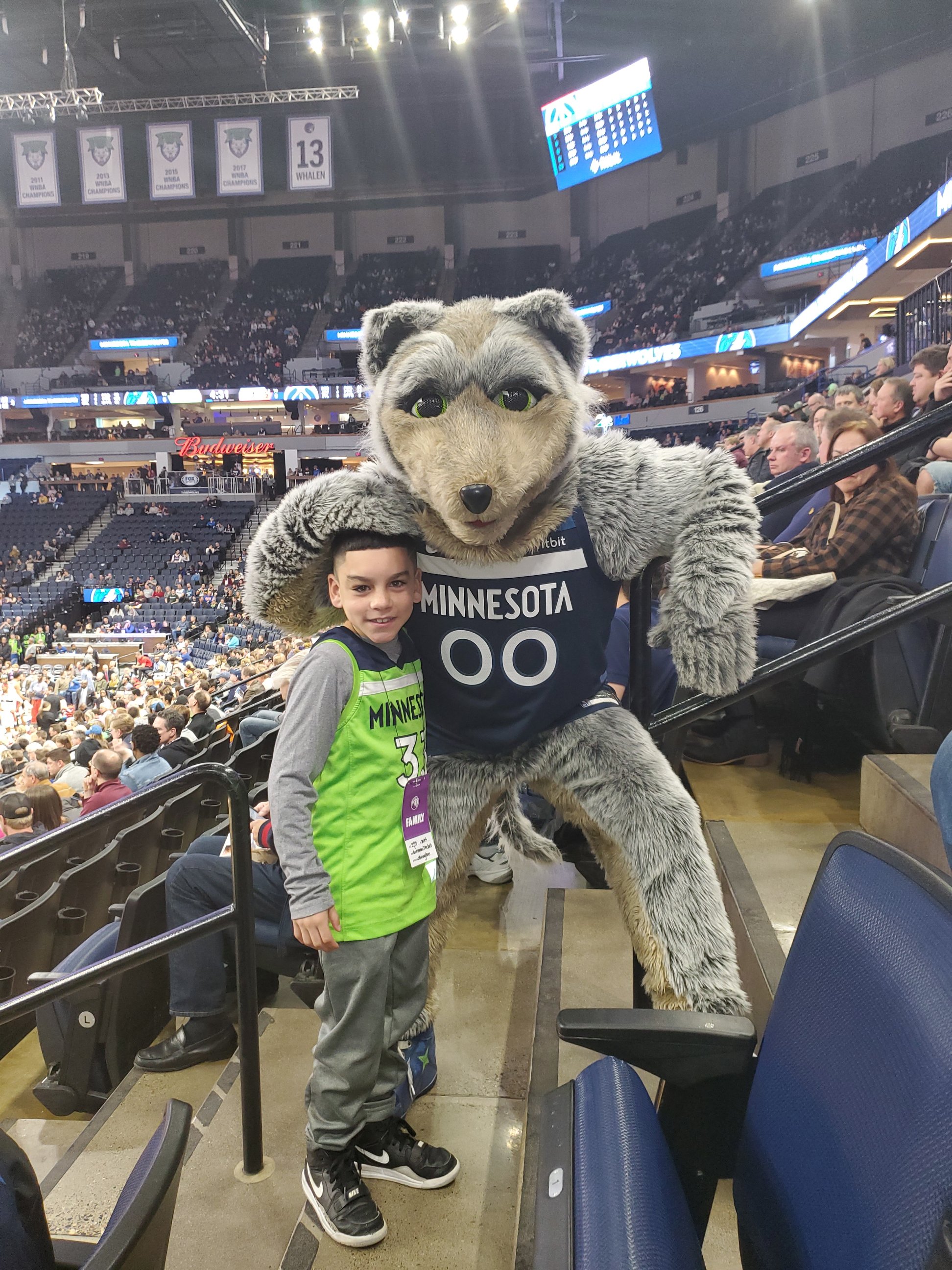 The first sign something was physically wrong with Gio was when his parents noticed a bump on their 4-year-old’s head during the summer of 2016. His parents took him to the hospital, where a doctor told them it was just a bruise.

A month later Gio was wrestling with his younger brother, Lorenzo, and the two bumped heads. Lorenzo, unfazed, shook it off. Gio, who still had the previous bruise, cried uncontrollably. When the crying continued for 45 straight minutes, the Toribios rushed their son to the emergency room as a precaution. Doctors ordered an ultrasound and promised the family they’d be out of the ER quickly. But when more tests were ordered, Lauren Toribio, who works as a medical assistant at the Maria Ferrari Children’s Hospital in Westchester, New York, suspected something wasn’t right. “You just don’t need more pictures of a bruise,” she said.

The following day, Gio underwent an MRI and CAT scan, which revealed lesions throughout his body. Next, a procedure was conducted to remove tissue from around Gio’s bruised eye. Then, on Aug. 8, 2016, the Toribios received the news that would rock their family: Cancer.

“You hear the word cancer about your own child, it’s your biggest nightmare,” Lauren Toribio said. “When they told me I was petrified that those would be the last moments we had with him.”

“I just felt like we had hit rock bottom,” Juan Toribio said. “I didn’t know how to tell my parents, her parents or the kids what was going on.”

“Tell an adult you have cancer, and they get all miserable and sad,” Lauren Toribio said. “We told Gio, and he was like ‘OK.’ It was like we told him he had a cold. He just didn’t understand.”

But Gio noticed when he started to lose his hair on his head and eyebrows. And he realized what he faced wasn’t simply a cold when he began to throw up everyday. Still, when he saw his mom crying after witnessing him throwing up blood, he said, “It’s OK, Mommy, I’m not sick. It’s just my cancer.”

Gio’s spirits remained high. He played on his Xbox and his smile made him a big hit with the nurses. But when Gio entered the hospital for a cranial surgery in February 2017, a biopsy revealed additional bad news. Gio was diagnosed with McCune-Albright syndrome, a rare genetic disorder that has multiple symptoms, including being vulnerable to bone fractures throughout the body.

“His bones won’t grow like other people,” Lauren Toribio said, “and he’ll probably need a hip replacement by the time he’s a teenager.”

The family was told that Gio, with the bone disorder, would likely be restricted from playing competitive sports for the rest of his life.

Gio, however, would soon find his place in athletics on the professional level.

In 2016, Gio was in Maria Ferrari Children’s Hospital when the New York Knicks — whose practice facility is nearby — came for a visit. That’s where he met Chasson Randle, who was on the team’s training camp roster. The two were developing a bond, but the Knicks released Randle before the season. Randle eventually signed with the Philadelphia 76ers. Still in touch with the Toribio family, he provided them tickets to a game that happened to coincide with an appointment at the Children’s Hospital of Philadelphia, where Gio was seeking a second opinion for his treatment.

Randle, unfortunately, was released by the Sixers the day before the game. Gio was crushed. But he still wanted to go to the game to hand out bracelets with the words “Gio Strong.”

On game day, Gio attended the Wells Fargo Center still wearing his hospital surgical mask. During pregame warm-ups, Gio and his family asked a security guard if he could deliver the bracelets to the players for him. The security guard denied the request. Instead, he took Gio to a tunnel where he would be able to hand out the bracelets. Ben Simmons received one and stopped to take a picture with Gio, who was wearing Simmons’ No. 25 jersey. Simmons also gave Gio an autographed shoe.

That’s when Covington walked by and witnessed the exchange.

“If he’s going to give you shoes, let me give you shoes, too,” Covington said before he jogged into the locker room and grabbed a pair of sneakers to sign and give to Gio.

Gio was beaming behind his surgical mask.

“There’s just a connection that I felt between Gio,” Covington said. “I don’t know what it was. But it just drew me to him.”

Covington felt such a strong bond that he invited Gio and his family to the Sixers’ family room after the game. There, Covington gave Gio a game jersey and asked his parents questions about the challenges they faced as Gio battled cancer.

“It’s just sad to hear that someone so young is going through so much,” Covington said. “To see how he’s fought cancer is inspiring.” 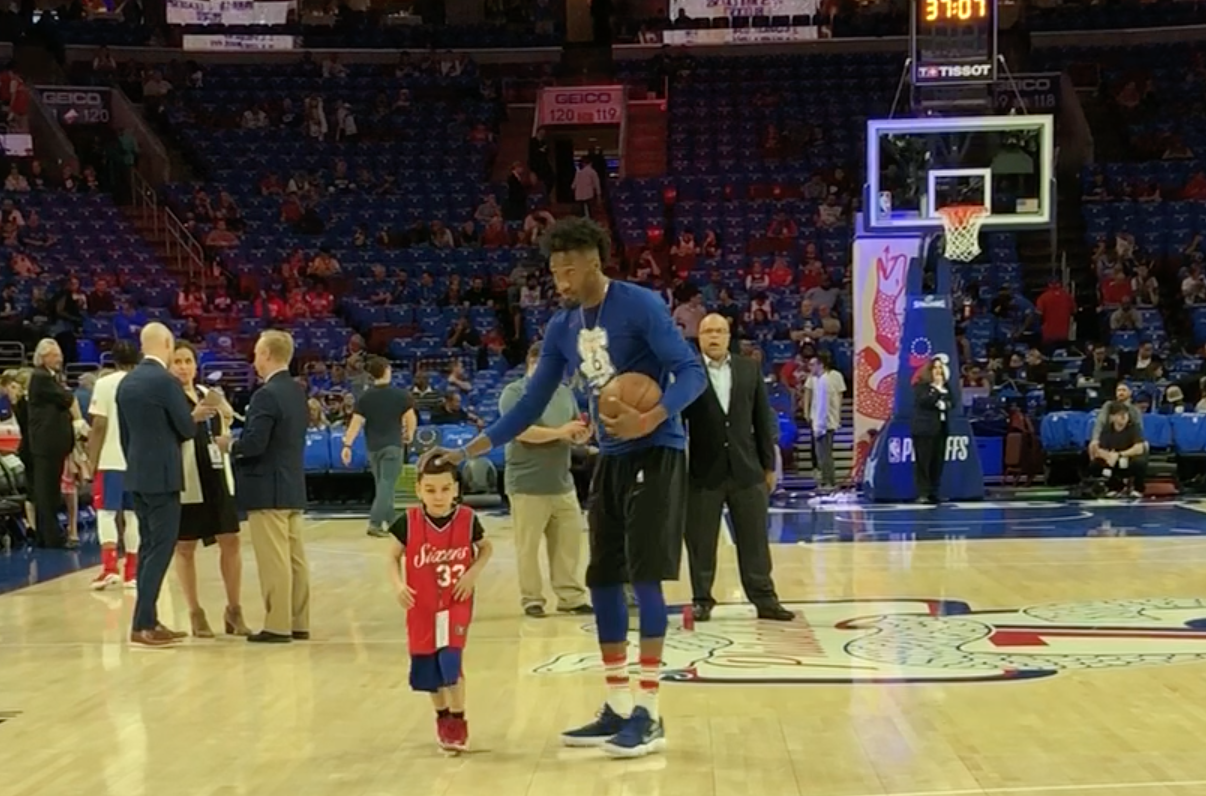 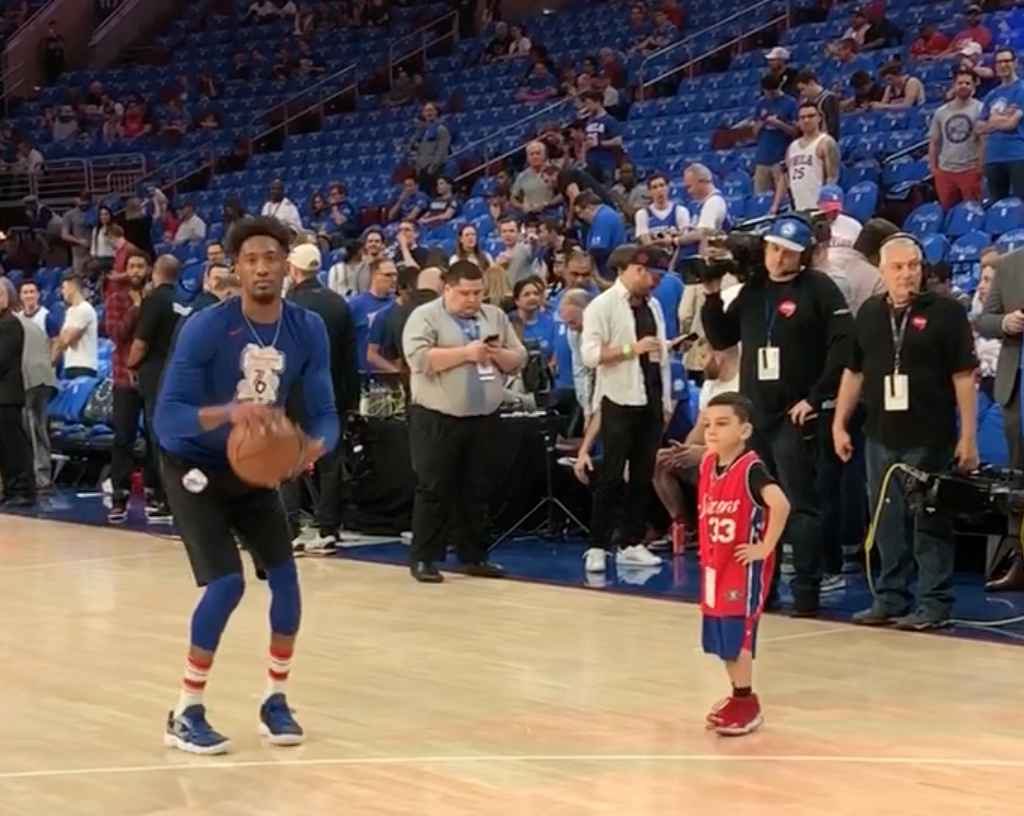 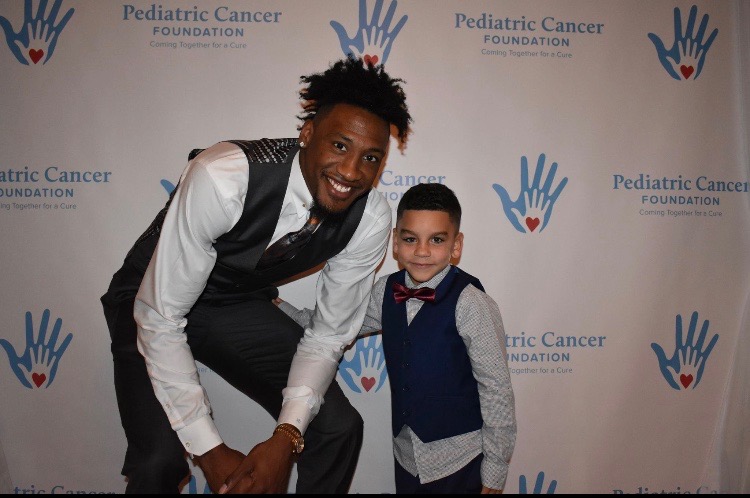 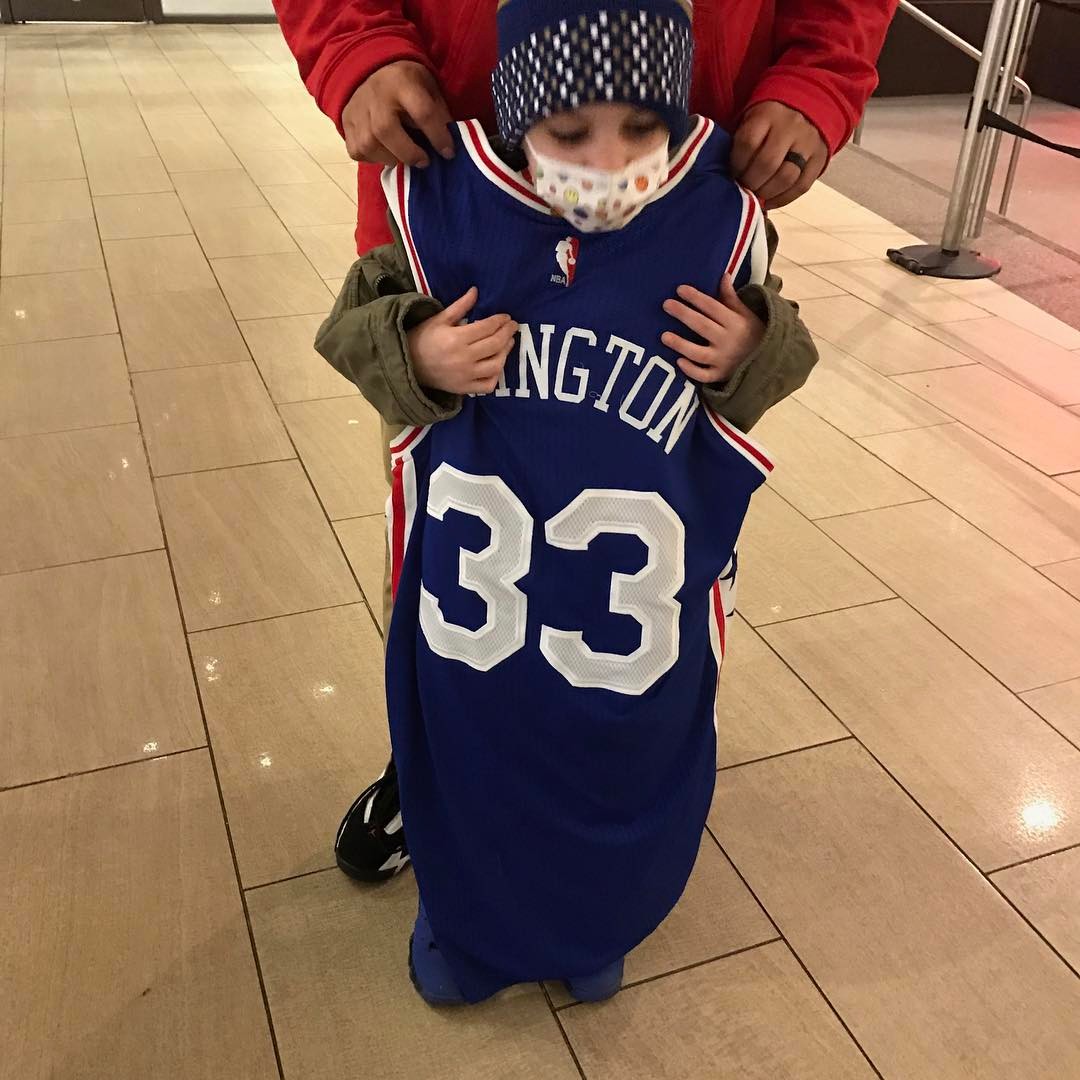 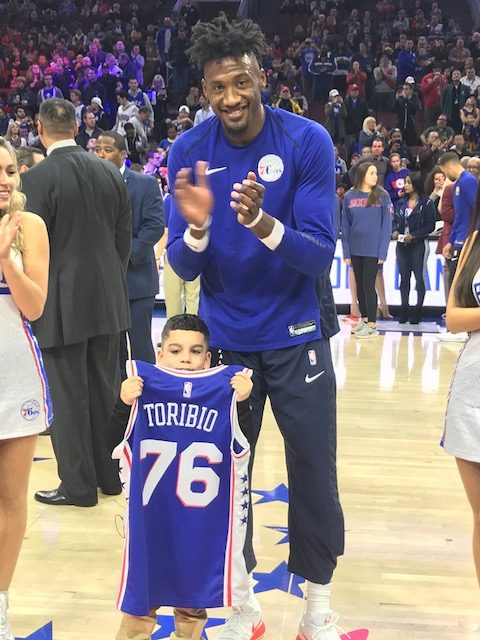 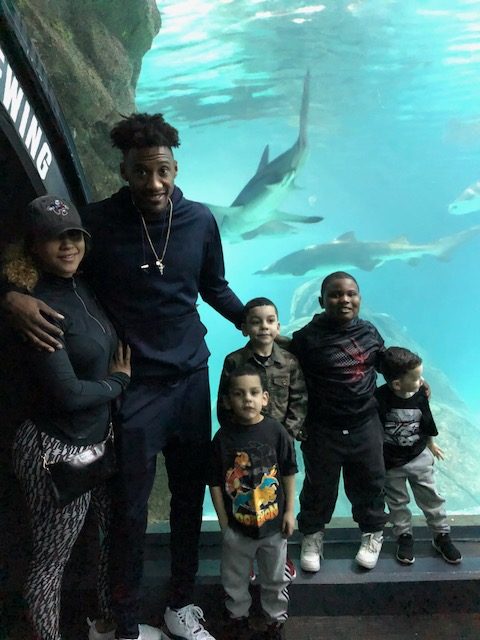 Covington learned that the family lived in New York and offered them tickets to the Sixers game against the Knicks the following night. Covington gave the family his number, and that’s where Lauren Toribio believed the story would end.

“He’s a young guy, and a professional athlete, so for him to take time for a 5-year-old he just met was different,” she said. “While he told Gio to call him anytime, we didn’t think much of it.”

But a few days later when Gio placed a FaceTime call to Covington, the NBA forward answered — much to the shock of the family.

“Gio was jumping up and down so much that he couldn’t keep the iPad still, and we told him, ‘You’re gonna make Rob dizzy,’ ” his mother said. “We were really surprised he picked up because they’re so busy. When he did, you could see his whole life light up.”

That first FaceTime call of just a few minutes had a lasting impact. “After he hung up, that’s all he did was talk about Rob,” Juan Toribio said. “And it’s been that way every since.”

Gio and Covington began FaceTiming almost daily. Covington had Gio and his family at his New Jersey home multiple times and even shared Thanksgiving dinner at the Toribio home. And when Covington played in New York, he would make sure the Toribios had tickets to the game.

“Gio, his mom and dad and his brothers are a part of my family now,” Covington said. “I told him that this is something that’s going to be lifelong. He inspires me because seeing what he’s beat, I can never complain about anything.”

On Nov. 10, 2018, Gio underwent surgery after doctors discovered a tumor during a routine scan. The good news was the tumor was benign. The bad news came a day later, but it had nothing to do with Gio’s health.

Juan showed his son a social media post on the breaking news that Covington had been traded to the Timberwolves.

“Honestly, we all cried,” Lauren Toribio said. “And Gio, he was just devastated.”

But through his tears, Gio placed a FaceTime call to Covington, who picked up.

Gio’s closet now includes Timberwolves gear, right next to the Sixers shirts and those of his favorite New York teams. His room, which once incorporated the colors of the Sixers, has now been painted in the shades of green and blue worn by the Timberwolves. But the Toribios aren’t able to visit Covington as frequently as they once did when he lived in New Jersey and played in Philadelphia.

Still, the Toribios credit Covington with raising the spirits of a young boy who could have sunk into a dark hole with his cancer diagnosis.

“You just see the sun shining through Gio’s eyes when he sees Rob and it’s like nothing else in the room matters,” his mother said. “I can never, ever thank or repay Rob for everything he’s done for my son.”

Gio, whose cancer is in remission, still faces challenges. While he is currently playing on a Catholic Youth Organization basketball team, which started shortly after he was cleared to play football, the McCune-Albright syndrome continues to affect the strength of his bones and has caused a collapse under his eye. Specialists are currently creating a 3-D printing that will be surgically placed under his eye — replacing the plastic plate that currently in place — after the new year.

“Even though he’s playing sports, there will always be a concern,” Gio’s mother said. “While this is his first surgery in awhile, we just don’t know when he’ll need another one.”

But, she says, Gio remains strong.

“He’s lost a bunch of friends during treatment and he’s asked, at times, ‘What happens if I die?’ ” she said. “But amazingly, through 10 surgeries — six of them 10 hours-plus — his spirit has never broke. He’s a strong kid.”

Part of that strength, Gio says, comes from his relationship with Covington — an athlete whose decision to provide more than an autograph and a selfie helped change a boy’s life.

“To see him having fun, after beating what he beat is incredible,” Covington said. “I hate to see someone so young have to deal with what he’s been through. I’m just glad I can have a positive impact on his life.”

A week after Gio’s memorable birthday weekend in Minneapolis, Gio is still recalling the highlights: the Mall of America, the hotel room overlooking the Target Center, navigating the Minneapolis skywalk, shopping for Covington’s dogs, and spending time with his favorite NBA player.