The HBCU combine was canceled, but not these players’ NFL aspirations

Players, always the underdogs, have bonded over being overlooked

The NFL combine put on solely for 51 prospects from historically black college programs never materialized this spring because of the coronavirus pandemic. The abrupt halt to the pre-draft process left them in limbo, having to improvise their NFL auditions. Like, for example, pulling out their phone and recording their weight on a bathroom scale.

“It was just a little scale I have in my house; that’s what I weigh myself on every day,’’ Marcus Pettiford of North Carolina A&T State University, one of the top offensive tackles at historically black colleges and universities (HBCUs) last season, said from his Greensboro, North Carolina, home. “I take a selfie of myself getting on the scale and saying, ‘This is what time it is, I haven’t eaten this morning, this is my current weight,’ so scouts won’t have the excuse of saying they don’t know where the weight claim I’m making came from.’’

All of this because scouts from every NFL team, as well as representatives from the Canadian Football League and the XFL, didn’t get to run Pettiford and the rest of the athletes through the battery of measurements, drills, tests and interviews that are customary at the combines. The HBCU combine had been scheduled for March 27-28 at the Miami Dolphins’ facility in Davie, Florida.

They could not work out at schools’ pro days, either. N.C. A&T’s had been scheduled for March 26, and Pettiford had his ticket to go to Florida the next morning, but the campus had been shut down the week before and the pro day was canceled.

Plus, not long after the official cancellation of the HBCU combine, the NFL canceled in-person interviews, meaning no trips by scouts and none by players to team facilities.

These athletes really needed the shine

Those 51 players were not invited to the national scouting combine in Indianapolis in late February. Out of the 337 draft-eligible players attending, only one came from an HBCU program in Divisions I, II and III and the NAIA.

That was offensive tackle Alex Taylor from South Carolina State University. He also was the only HBCU player invited to the two postseason all-star games that the NFL uses to scout prospects, the Senior Bowl and the East-West Shrine Bowl.

That absence of HBCU players is largely the reason Troy Vincent, the league’s executive vice president of football operations, pushed to create a separate combine for the most chronically overlooked pool of talent in the sport.

“That causes me to pause,’’ Vincent said. “Three hundred kids — man, I know there’s more than one student-athlete professional prospect. Without pointing a finger, we all share in the responsibility for creating equity. That’s not equity to me.

“We pride ourselves on saying, ‘If you play, the game will find you.’ And we’re seeing that that hasn’t really played out that way,’’ he added.

At this point in the game’s evolution, he said, no one in the evaluation business should still be thinking of players from black colleges as diamonds in the rough and leave their chances up to scouts with special pipelines to that talent.

“We must remind everyone that the greatest players who have ever played at the professional level came from HBCUs,’’ Vincent said.

Thus, the first combine dedicated not to small, obscure programs and players, but specifically to this group. Being part of that group left some invitees somewhat in awe.

Tight end DuShon David, who helped Bowie State to an undefeated regular season, the CIAA championship and an NCAA Division II playoff berth, said that when he got his email invitation from the NFL the first week of March, all the players and coaches celebrated with him.

“I said, ‘I’m gonna go down there and show out, do what I do,’ ’’ David recalled from his southern Maryland home, “ ‘so they’ll come back here next year and get y’all.’ ’’

That sentiment was shared by other invitees, who were honored to be in the first class and determined to not be the last ones from their schools on the NFL’s radar.

“There were gonna be three of us in Miami,’’ said Morgan State linebacker Ian McBorrough from his Baltimore home, “and we were gonna have our pro day that week. There were a lot of guys there who should’ve been invited to that combine. If we went down there and did well, next year, there were going to be a lot of [scouts] at our pro day and more of our players getting invited to that combine.

“That’s what we do — we’re checking on each other, motivating each other, because you bond with these guys over four years. You’re chasing the same dream.’’ 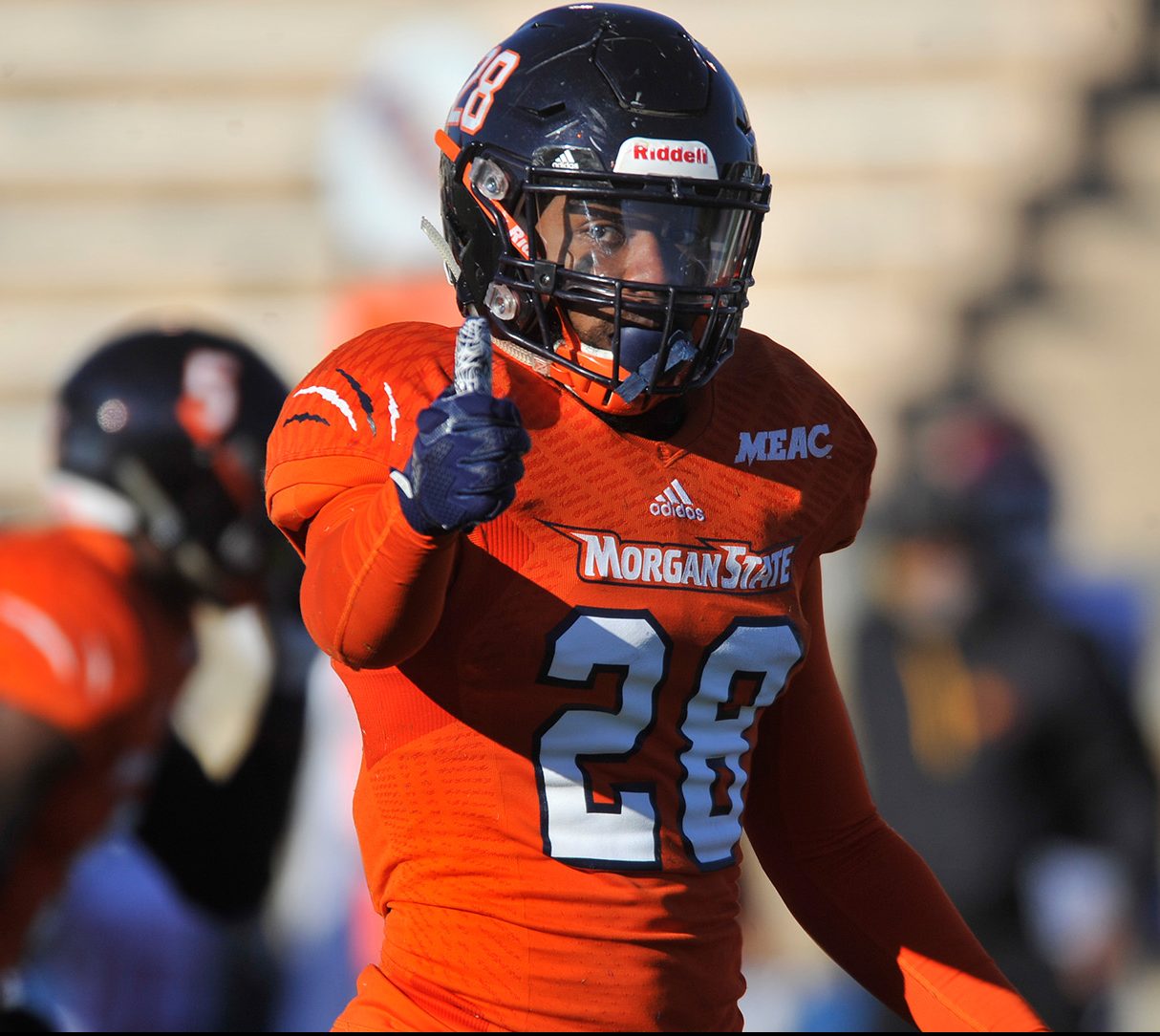 Rico Kennedy: A man of many hats Read now

Fellow linebacker Rico Kennedy and wide receiver Manasseh Bailey were also going to represent Morgan at the combine. Kennedy was particularly excited because as a native of Fort Lauderdale, Florida, who had returned home after his December graduation: “I was probably gonna take an Uber,’’ he said, laughing.

“It hurt me,’’ Kennedy said of the cancellation of the combine, “because I wanted to showcase my talents to the scouts on a bigger platform. But you totally understand what the NFL had to do.

Like the other prospects, Kennedy has leaned into the concept of staying ready no matter what might happen before the draft. While raising his 7-year-old and 4-month-old daughters with his wife, Destinee, he works out at home now that fields, tracks and gyms are off-limits where he lives.

Pettiford said he left his pre-draft training location in Lawrenceville, Georgia, prematurely in case travel in Georgia or North Carolina was restricted.

Finding unique ways to work out in limited space has been as challenging as giving observers trustworthy weigh-ins, he said. But his two Aggie teammates who were also ticketed for the HBCU combine, wide receiver Elijah Bell and defensive lineman Justin Cates, have stayed in touch, and the three have pushed and encouraged each other through the uncertainty.

They needed it, Pettiford said: “Everything had to happen the year we tried to go to the NFL. It was disappointing at first, but we’ve tried to keep each other positive.’’

McBorrough and David faced the same dilemma as Maryland enacted stay-at-home policies in late March. McBorrough’s agent had scheduled a workout with several clients on April 3 in Philadelphia to put on video and send to teams. But McBorrough was able to attend and get his measurables and drills on the record.

De’Shawn Waller, Alcorn State’s running back, faces a similar problem in reverse: training in Florida, he hopes to get back to his family in Atlanta soon, but isn’t sure if that’s possible. He also has seen his world shrink as he tries to make his mark with scouts without approved places to work out.

His agent arranged for several clients to record their drills, witnessed by real NFL scouts, and send to those teams. To boost visibility, he also posted the times on Twitter, although not the drills themselves.

Without the combine or his pro day, Waller said, “I feel like it’s gonna be real tough. Me and Solomon [Muhammad, his Alcorn teammate, also scheduled to attend the combine] — I’m not even gonna just say him, all the seniors from our school — we put so much time into this.

“God must have a reason,’’ he added. “Maybe it’s giving me a lesson, to keep working out harder. So, it’s a good thing …” he paused, then continued, “and it’s a bad thing. It’s good that they’re bringing in something specifically for the HBCUs. We were gonna be the first ones. We were gonna set the tone.’’

They are the best of the best at HBCUs

This was a premier group of players the NFL had chosen, to be sure. It included three of the four HBCU players selected as Associated Press FCS All-Americans (Pettiford, Grambling’s Joseph McWilliams and Tennessee State’s Chris Rowland; Taylor is the fourth) and Division II All-American Daryus Skinner of Winston-Salem State.

Rowland was named Black College Football Player of the Year by the Black College Hall of Fame; one of the other finalists, Florida A&M quarterback Ryan Stanley, was also invited.

All 17 MEAC players invited were all-conference selections, as were 12 of the 14 SWAC players, eight from the CIAA, two from the Southern Intercollegiate Athletic Conference, one of the two Hampton players and three of the five from Tennessee State. Eleven of the group were named to the 2019 Black College All-American team.

“It’s good that they’re bringing in something specifically for the HBCUs. We were gonna be the first ones. We were gonna set the tone.’’ – Alcorn State’s De’Shawn Waller

Like several of these prospects, many had to take the long way just to get to the first-of-its-kind combine invitation.

Pettiford dropped out of N.C. A&T for a year after being ruled academically ineligible for his sophomore season, then straightened out his grades, rejoined the team and became a star for his final three seasons.

David started at Shaw University, transferred to Morgan, then to Bowie for his final season, switched to tight end full time and blossomed. In their time as teammates at Morgan, Kennedy and McBorrough played under four head coaches.

And the players without the all-league pedigrees for 2019 still had credentials of their own. Waller has been one of the nation’s leading rushers for Alcorn as a junior in 2018 before injuries disrupted his senior year. Hampton quarterback Deondre Francois started for two years at Florida State. And the lone NAIA player invited, Langston defensive tackle Craig Evans, played significant snaps for Michigan State on its 2015 college playoff semifinal team.

Ideally, it would not take a separate combine for NFL teams to recognize their talent.

“That’s what’s disheartening,’’ said Vincent. “We’re finishing up the first quarter of 2020, and we’re still talking about this.”

This time next year, Vincent said, he intends for there to be another HBCU combine: “That’s the plan. No question, if the environment and circumstances allow.’’

Before that, though, these 51 have to navigate a world that opened a rare door to them, then closed it almost before they could step toward it.

“That’s me, being an underdog, being overlooked,’’ David said. “That’s the story of my life, in a sense.’’

“You’ve just got to keep faith and maintain the same mentality,’’ McBorrough said. “Just keep telling yourself to keep going until someone says to me: ‘Ian, you’re not ever gonna play in the NFL.’ ”