During his 14-year NBA career, Allen Iverson had every bit of swagger and style. And while his off-the-court attire sparked the NBA’s implementation of a dress code in 2005, the way in which Iverson suited up for games didn’t change — his on-court look was always as beautiful as a Pablo Picasso painting.

He had the headband and the braids (which his mother kept tight, even during games). There were also the tattoos and the wristbands. And his signature to his uniform masterpieces was his custom Reebok sneakers. The only part of his getup that lacked the Iverson flair was his socks. Flipping through old photos of “The Answer” from his playing days, you’ll notice that as loud and funky as the designs of his shoes were, he always wore plain, quarter-length NBA logo socks. Either white or black.

This week, Iverson finally got the one thing he was really missing in terms of style for all of those years. The 2016 Basketball Hall of Fame inductee teamed up with the popular sock brand Stance to create his first sock collection. In total, there are five pairs that each have their own name to reflect specific moments from Iverson’s life and career, according to Stance’s press release.

Here are the five pairs, power ranked in descending order, including each design description Stance gave them. 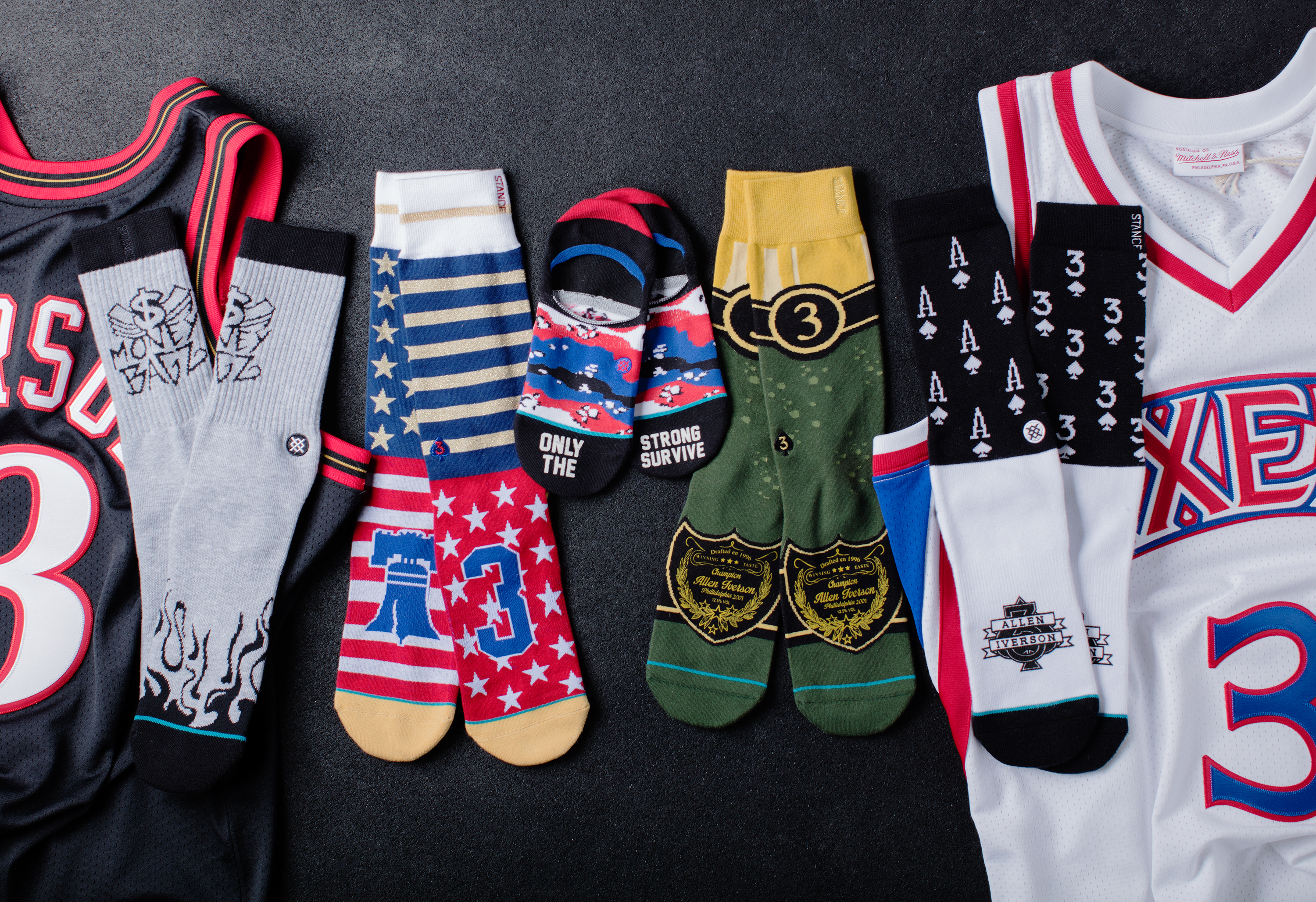 “Survival,” which comes in a superinvisible height per Iverson’s personal style, is inscribed with some of the most iconic ink in all of sports.

The “Survival” socks (middle) are the only ankle socks in the collection. They seem to symbolize Iverson’s small stature at which he played during his career. He was listed at 6 feet (though how many times did someone tell you he wasn’t actually that tall?) and 165 pounds, often dubbed the best pound-for-pound player in league history. The socks also feature the words “Only The Strong Survive” on each toe, an apparent nod to the four-month jail sentence he served in high school that nearly crushed his dreams to play both collegiately and professionally.

But Iverson made it to the league and proved he was there to stay — especially after he crossed Michael Jordan. 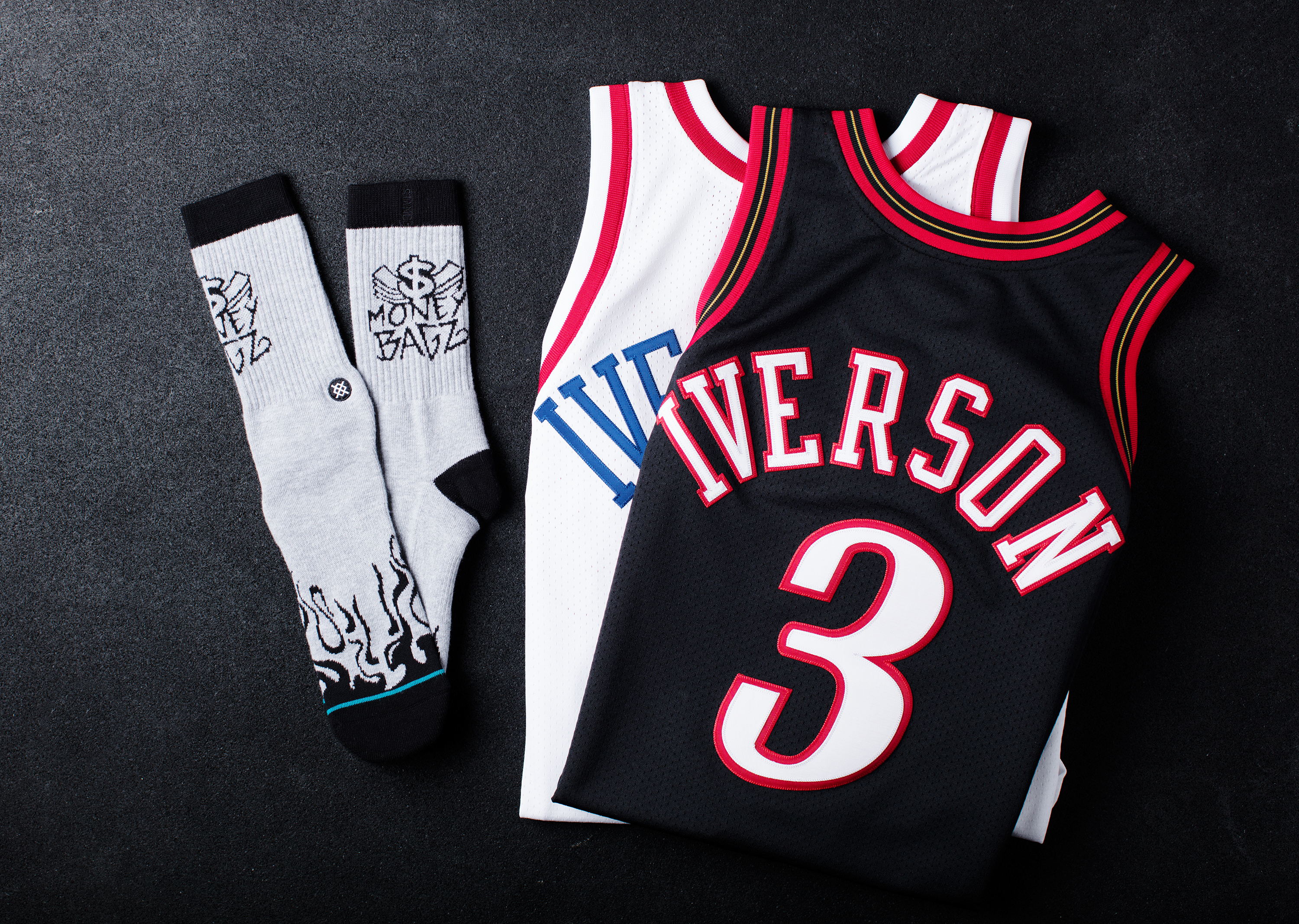 “Money Bagz” brings to life a famed tattoo that has lived on Iverson’s left hand for years.

Iverson wasn’t always tatted up. He entered the league in 1996 without tattoos or braids. Eventually, the swag changed a little bit with the cornrows and all the ink, and one of his notable tattoos is the one on his left hand that says “Money Bagz” with a huge dollar sign and stacks of bills. These socks are nice because they’re simple — gray and black, which you can wear with just about anything. The inclusion of the “Money Bagz” design is also a testament to the businessman the former No. 1 pick of the Philadelphia 76ers developed into throughout his career. Like, let’s be real, how many people were balling in Reeboks before Iverson’s came out? 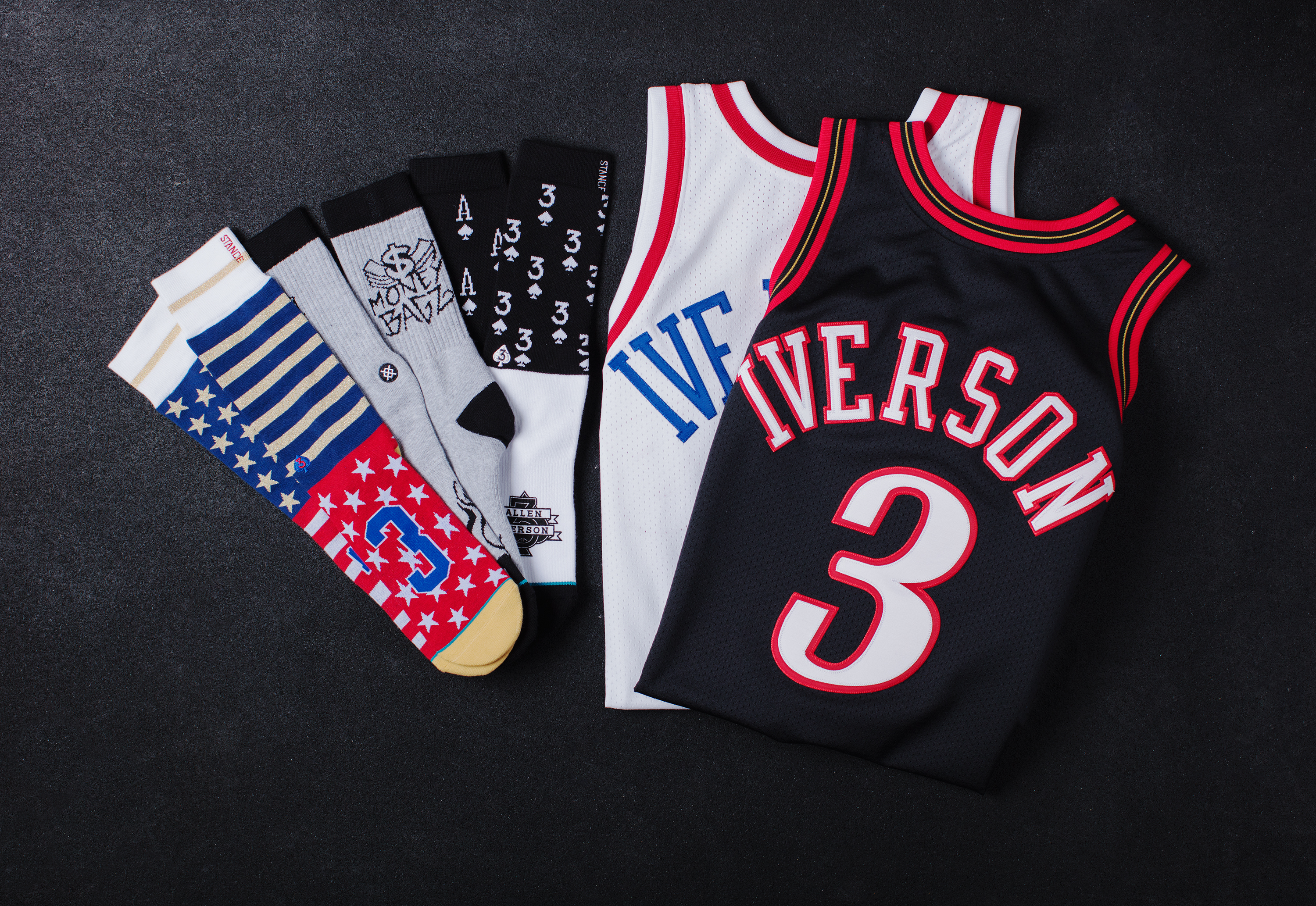 You learn something new about Iverson every day. Apparently, he’s big into games, especially cards. Who knew? Regardless, it’s probably safe to say that his favorite card game is Spades, given the symbols featured on the “Aces” socks (far right), along with the No. 3, which he wore on the court. Newest bucket list item: Play a game of Spades with A.I. He’d better not renege. 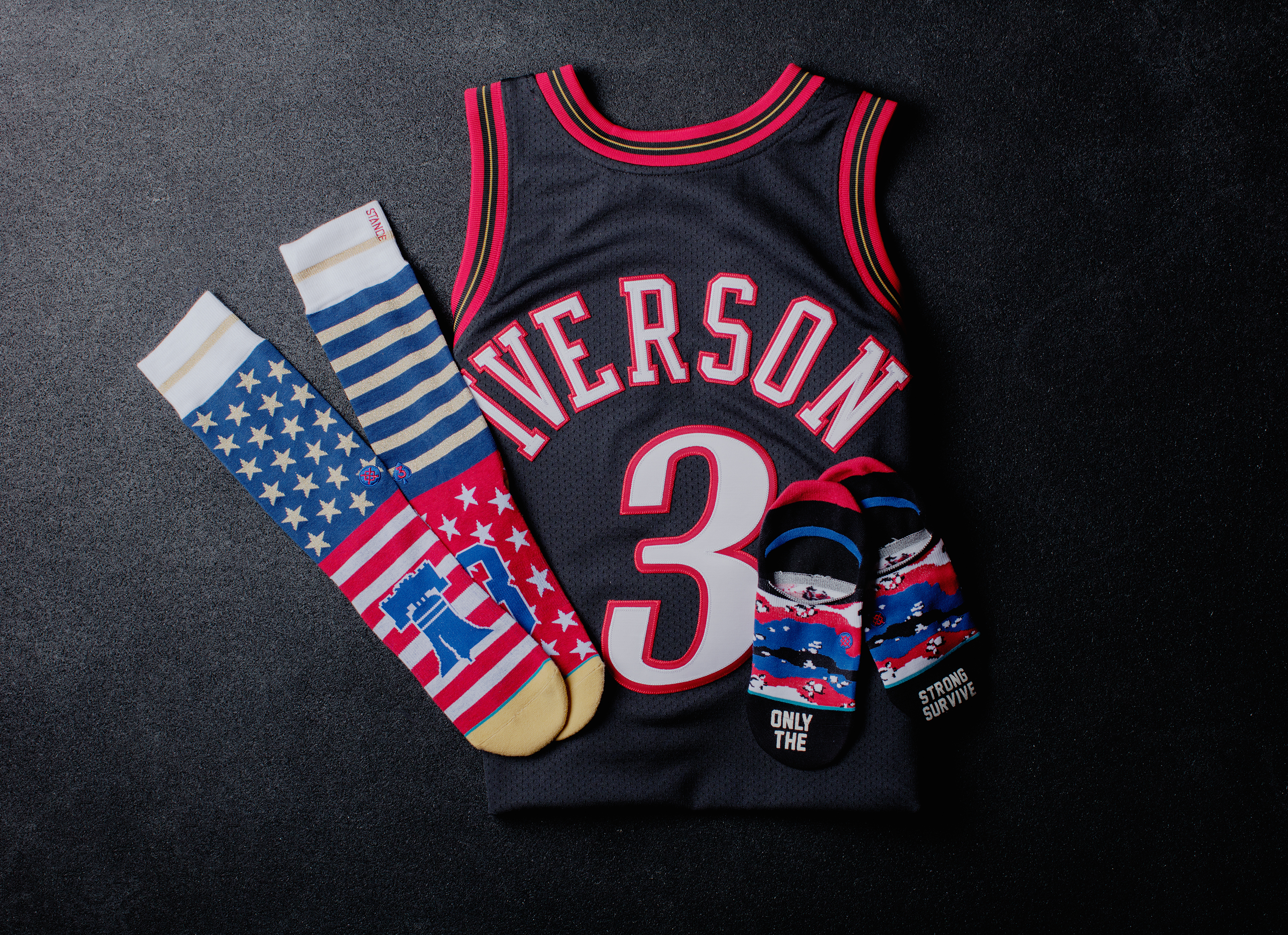 This sock, between its American theme, Liberty Bell, No. 3, and golden highlights, reflects on the unforgettable years that Iverson played in Philadelphia.

The one thing that’s so respectable about Iverson is the allegiance he’s maintained with the city that drafted him 20 years ago. When you think of A.I., you think of him in a 76ers uniform — not in uniform for the Denver Nuggets or the Detroit Pistons or the Memphis Grizzlies. At times, it’s hard to even remember that he’s not from Philadelphia, but a native of Hampton, Virginia. “I am Philly,” Iverson said at a ceremony in 2014, when the 76ers retired his No. 3 jersey. “It’s always going to be that way.” That legacy lives on through these socks, which are the perfect color scheme for Olympic season. Maybe one of this year’s U.S. men’s basketball team players will pay homage by wearing them. 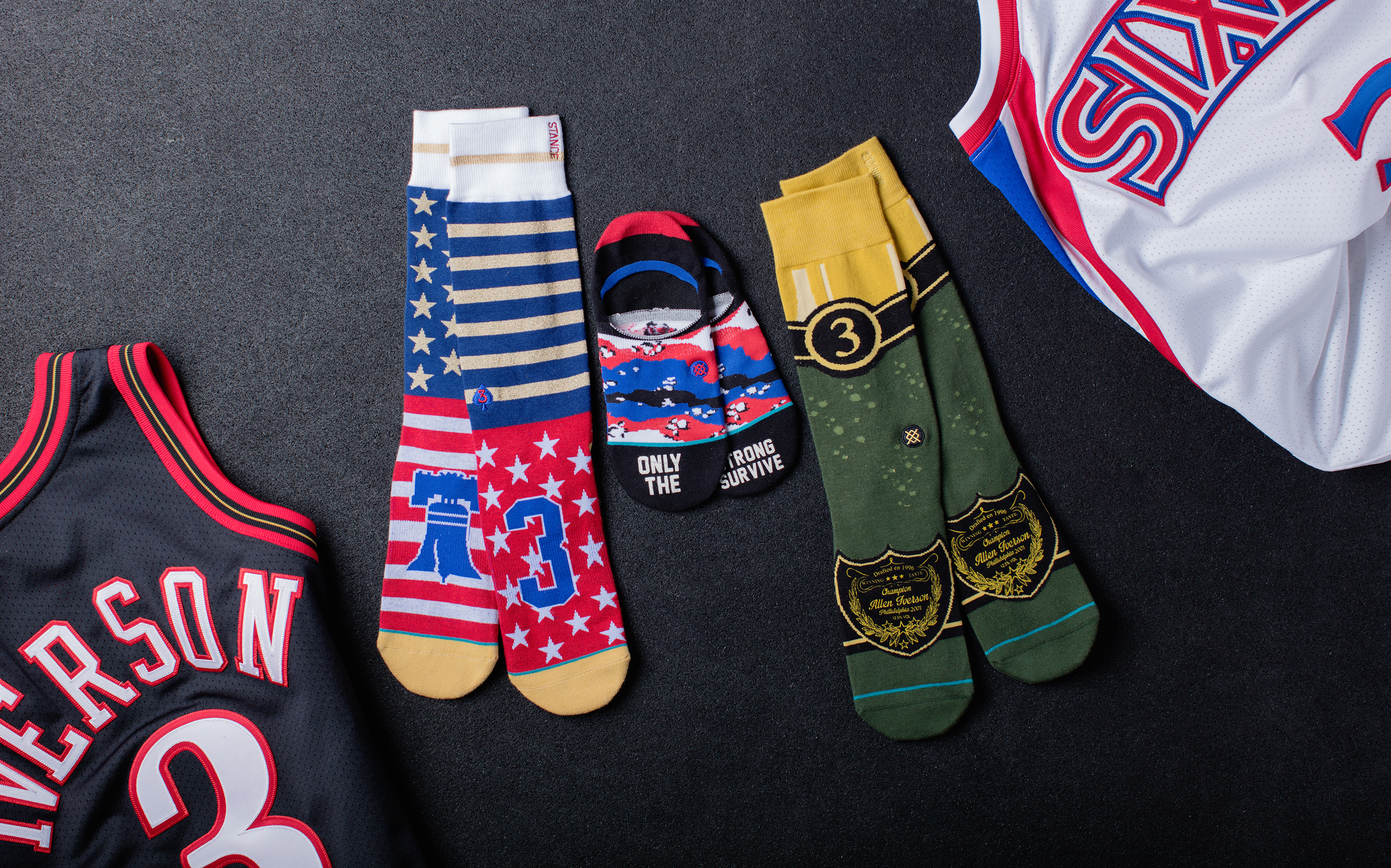 “Winning Taste” is an ode to champagne, which Iverson most notably popped after leading his team to the 2001 NBA Finals.

When looking at these glorious “Winning Taste” socks (far right), it’s hard not to think of the lyrics to Lil Wayne and Birdman’s 2007 song, Pop Bottles. We popping’ champagne like we won a championship game/ Look like I got on a championship ring/ ‘Cause I ball hard. The thing is, Iverson never won an NBA title and only made it to the NBA Finals one time in his career, in 2001. Though the 76ers lost the series 4-1, Iverson provided one of the most iconic moments in NBA history, which still lives on in the form of memes to this day. The infamous step over Tyronn Lue:

Glasses up to that. The “Winning Taste” socks are our winner as the best pair in A.I.’s new collection, which can be purchased on Stance’s website.