En route to his fourth title, the Golden State guard battled emotions tied to more than his injuries: ‘I believed in myself and knew I’d get back to this point’

BOSTON – Klay Thompson hugged the NBA championship trophy tightly on the vaulted stage after a conversation with NBA deputy commissioner Mark Tatum. The injury-riddled Golden State Warriors guard also took a moment to sit on the stage, smiling with his feet dangling.

The four-time NBA champion stood on the stage with his father, Mychal, proudly holding up the Bahamian flag. Then Thompson completed his lengthy stage celebration by doing the Nae Nae dance and prancing around with 2022 Finals MVP Stephen Curry before finally coming down.

The 2022 NBA Finals became Thompson’s stage as he celebrated on it longer than any other champion on the Warriors, knowing more than anyone how precious such a moment is.

“He is just soaking it all in and doesn’t want to leave the stage because he had to work so hard to get back here,” Mychal Thompson told Andscape while watching his son dance after the Warriors won the NBA title with a 103-90 win over the Boston Celtics at TD Garden in Game 6 on Thursday night. “He had to work through so many lonely times to get back to this level, area and achievement.

“When it’s taken away from you, you realize how precious it is. It’s not about winning a championship, it’s about playing basketball again freely. That is what he appreciates. This is the icing on the cake. The filling in the pie. He is so thankful that he could compete on this level again.”

Said Klay Thompson to Andscape: “I know how fleeting this moment can be. To be here again, it’s special. I can’t believe it.”

The road back for him was arduous and included two full missed seasons due to separate injuries, including one in the 2019 NBA Finals when he tore the ACL in his left knee.

In those Finals against the Toronto Raptors, an injury-plagued Warriors team was vying for its fourth NBA title in five seasons but had lost Kevin Durant to a season-ending Achilles injury in Game 5. With Golden State trailing in the series 3-2, Thompson appeared to own the needed hot hand to keep the series alive in Game 6. Those hopes were dashed late in the third quarter when Thompson, who scored a game-high 30 points, suffered his knee injury.

The Raptors were crowned first-time NBA champions. Meanwhile, Thompson was facing the first major injury of his career.

“In 2019, it was easier to accept because I had never been hurt before and that five-year run took a lot out of us,” Thompson said.

Thompson missed the entire 2019-20 season, but was expected to return to action at the start of the 2020-21 season. During a pickup game in Los Angeles in November 2020, however, Thompson faced another devastating setback when he tore his Achilles tendon in his right leg, an injury that wiped out another season.

News of the injury brought Curry to tears. Mychal Thompson said that injury was the “darkest time” for his son. 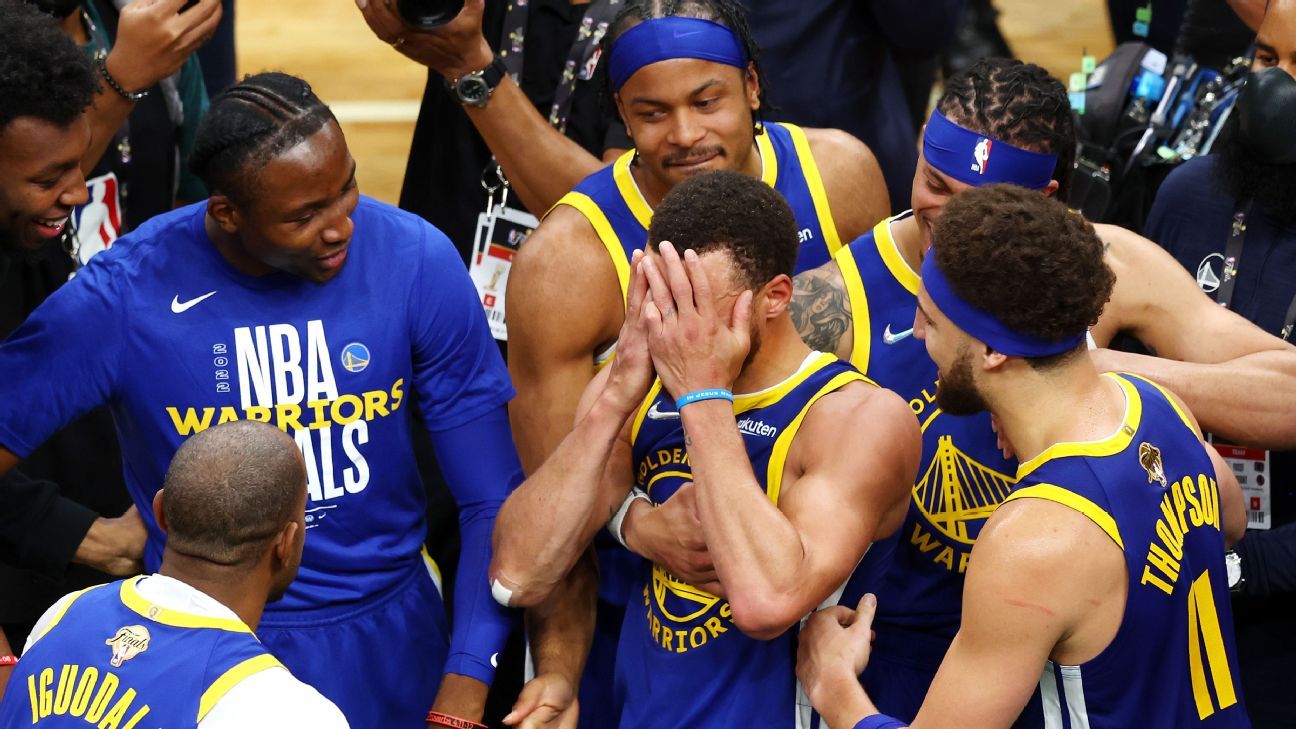 “He knew he would have to complete another year of rehab after going through the last year of rehab,” Mychal Thompson said. “You have to reboot yourself after you start all over again, and you have to have patience. A lot of prayers went up for him. I believe in God. I believe in divine intervention. He had to work. I think my prayers were answered.”

Said Klay Thompson: “The second time it happened it was like, what the heck is going on, man. Just to stay with it, just calf raise after calf raise, after underwater treadmill, so many days, not even touching a ball.”

Thompson said before this season that the Warriors were winning the NBA title or bust, but such thoughts seemed far-fetched if he wasn’t back playing like his old All-Star self. A total of 941 days passed between the five-time NBA All-Star tearing his ACL on June 13, 2019, and when he returned to the court on Jan. 9 of this year. It was also his first time playing in the Warriors’ new arena, Chase Center.

The Warriors named Thompson’s return as “Klay Day.” Several of Thompson’s teammates and NBA players throughout the league such as LeBron James, Jayson Tatum, Kyle Lowry, Donovan Mitchell and Patrick Beverley went to social media to post pictures of him in celebration. After spending so much time rehabilitating and not in a Warriors uniform, Thompson had 17 points, a nasty dunk and three 3-pointers in 20 minutes during a 96-82 win over the Cleveland Cavaliers.

“The anguish that Klay has felt over the last three years, people can guess as to what it was like, but we saw it up close,” Warriors coach Steve Kerr said. “Between a second yearlong injury and losing what he loves to do most in life, playing the game, it’s been a rough go. His return has been special for us on and off the floor because of what he has meant for the organization and done for this team.

“His play and two-way ability is up at the top of the league. I’m thrilled for Klay.”

Said Curry: “For him to come back in January and five months later be a champ again, that is the stuff of legends.”

Statistically, this wasn’t Thompson’s most memorable Finals. He averaged 17 points on 36.9% shooting from the field and 34.1% shooting from 3-point range. The 6-foot-6, 220-pounder also didn’t live up to his reputation as “Game 6 Klay,” scoring 12 points and missing 15 of 20 field goal attempts and six of eight 3-pointers Thursday night.

But what mattered much more was that Thompson played 41 minutes as the Warriors clinched their fourth NBA title since 2015. And on Monday, Thompson and the rest of the Warriors can celebrate with their fans in the Bay Area with a parade scheduled to be held on Market Street in San Francisco.

“I’m on Cloud 109,” Thompson told Andscape. “To be here, it is just special. I just felt special for my teammates, the organization, the training staff. There were some dog days. Just to be here for the fourth time on the mountaintop, I am going to soak this up tonight. I’m not going to sleep. I can’t wait to see everyone at the parade. That’s going to be special.” 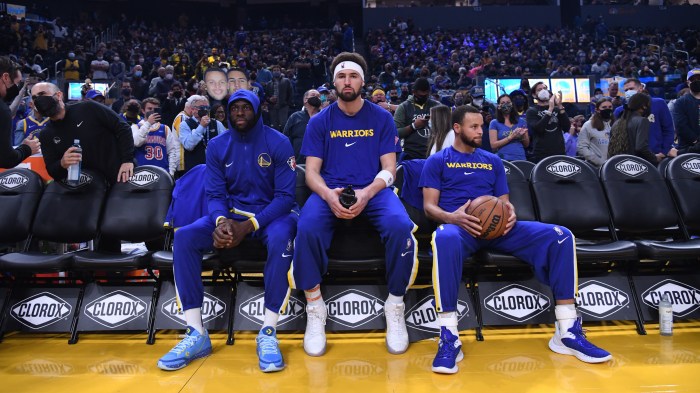 Thompson’s emotions after becoming a four-time NBA champion were not limited to his injury nightmare.

Thompson proudly held the Bahamian flag after winning a championship in honor of his heritage and his father, former NBA center Mychal Thompson. The two-time NBA champion was the first Bahamian player in the league after being selected with the No. 1 overall pick in 1978. Klay Thompson added that he held up the yellow and blue flag to honor his relatives from the Bahamas who had died in recent years.

“I know my family is in Nassau watching,” Thompson said. “We had a tough year losing our uncle Colin, who is such a big part of my family. He is the oldest brother on my dad’s side, and he was a legend on the island. I just love the Bahamas with all my heart. I love visiting my grandparents, my cousins when I was a kid, and I can’t wait to go back and celebrate with all my family this summer.

“I just think about them all the time. Our family has faced adversity the last few years losing my uncle Paul and my uncle Colin and my aunt Patty. And with life, things go on, so I just keep them in my heart when I go out there and hoop.”

Said Mychal Thompson: “A lot of people in his family [are] back there watching. He had to raise the flag to represent them.”

Curry had perhaps the most memorable night of his future Hall of Fame career as he won his fourth NBA championship and finally the elusive Bill Russell NBA Finals Most Valuable Player award. What also was memorable to Curry was seeing Thompson rejoice in winning a title after overcoming so much.

“You saw [the] perseverance that he embodied these past three years,” Curry told Andscape. “He was trying to get back healthy, and he understands the dog days of rehab and not knowing what the journey was going to be like.”

And for those facing painful adversity like he did, Thompson has a message.

“Have perseverance and stay with it every single day,” Thompson said. “Look at the big picture. Don’t be so shortsighted. Believe in yourself. I believed in myself and knew I’d get back to this point.

“I said championship or bust. Remember when I said that? I said that. And we’re here now. C’mon.”