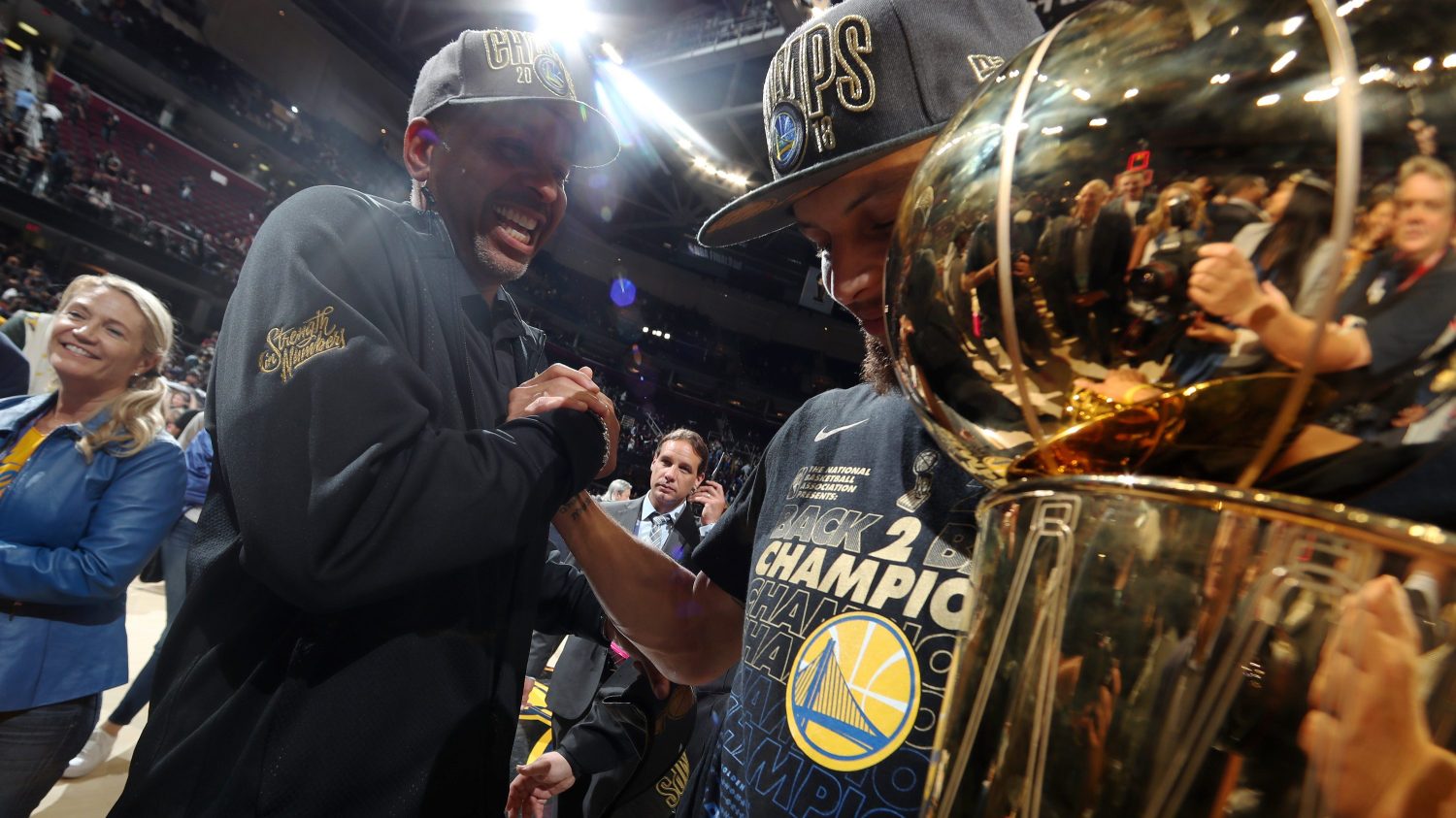 Dell Curry and Stephen Curry #30 of the Golden State Warriors pose with the Larry O’Brien Championship Trophy after Game Four of the 2018 NBA Finals against the Cleveland Cavaliers on June 8, 2018 at Quicken Loans Arena in Cleveland, Ohio. Nathaniel S. Butler/NBAE via Getty Images
Locker Room Talk

It was about family, selflessness, listening to advice and perseverance

When Larry Nance Jr. was traded from the Los Angeles Lakers to the Cleveland Cavaliers earlier this season, the first person he called was his father, Larry Nance Sr.

When Klay Thompson needed advice about an injury, he called his father, Mychal Thompson.

When Stephen Curry went through a shooting slump, he called his father, Dell Curry.

While most NBA athletes are first-generation players, the sons of former players are a select few who have had early exposure to NBA life. That exposure didn’t make the journey any easier but made it seem more obtainable, less of a dream, more of a reality.

Second-generation players such as Nance Jr., Thompson and Curry certainly have odds to beat and mountains to climb. Having fathers who have already beaten the odds and climbed the mountains makes the journey a lot less daunting. On Friday, Thompson and Curry presented their dads with an early Father’s Day gift as Golden State won its third NBA title by cruising past Nance Jr.’s Cleveland Cavaliers.

“Guys like Steph, Klay, guys who have been around this league since they were little kids, have an advantage because they get introduced to this lifestyle at such an early age. If they develop a passion for it, they see how far it can carry them.”

While thousands of players crave the NBA life, the second-generation players grew up in it.

“They have more access to legendary players,” Mychal Thompson said. His son, Klay, received advice from the likes of Kobe Bryant, Clyde Drexler and Rasheed Wallace.

“Guys like Steph and Klay don’t have to hear it from their dads; they hear it from other legends who they watch. Then it becomes ‘It’s not my dad preaching to me, it’s Kobe Bryant telling me what to do, it’s Clyde Drexler,’ “ Thompson said.

“I think that carries as much weight as the father telling them what to do because they’re getting validation from a legend.”

There are two sides to being a second-generation pro.

For Nance Jr., being the son of an NBA player had its advantages, but as a young player growing up in Akron, Ohio, the disadvantages seemed to outweigh the advantages. His father was not just an NBA player, he was a star, a three-time NBA All-Star and an NBA All-Defensive first team member as a consistent shot-blocker. In 1984, Nance Sr. won the NBA’s first Slam Dunk Contest.

When Nance Jr. began playing basketball, there were expectations he could not meet. He was expected to be his dad — and he was not.

“Growing up, I wasn’t very good at basketball,” Nance Jr. said. “Everybody saw Larry Nance Jr., so you were getting everybody’s best shot. I guess that makes you better in the long run, but growing up it definitely was difficult to adjust to.

“Growing up, I wasn’t very good at basketball,” Nance Jr. said. “Everybody saw Larry Nance Jr., so you were getting everybody’s best shot. I guess that makes you better in the long run, but growing up it definitely was difficult to adjust to.

“It was tough not being good at basketball, walking into the gym to play knowing that I was going to be sitting for most of the game. But everybody here knows exactly who I am and they’re staring at me, waiting for me to do something amazing, and I was like, ‘I can’t do that.’ ”

Nance Jr. steadily improved, and by the end of his senior year in high school he was coveted enough to receive a scholarship to Wyoming. By that time, he had come into his own and could more fully appreciate the advantages of being the son of a former NBA star.

“I loved it,” he said. “I was able to handle everybody’s best game and throw my best game back at them.”

The younger Nance said his father’s contribution had less to do with on-court mechanics than helping him understand the business of the sport. In this case, helping him deal with being traded for the first time.

“I called him the second it happened,” Nance Jr. told me earlier this week.

His father was traded from Phoenix to Cleveland in February 1988. Nance Sr. found out he had been traded when he arrived at the stadium.

“Clearly, this is a business,” the younger Nance said. “You can build relationships all you want, but at the end of the day, it’s still a business.

“For some guys it comes as a shock. But when I got traded from L.A. to Cleveland, it didn’t shock me because I knew it was possible.”

Nance Jr. went from a team of young players in rebuilding mode to playing in the NBA Finals on a team led by LeBron James.

And he’s back home with his dad.

“I just think it’s cool that we ended up in the same spot.”

Second-generation players represent a departure from the typical rags-to-riches story of a player’s journey to the NBA. Especially for young African-American players, the quest is supposedly fueled by a desire to escape poverty and provide a better life for one’s family.

Second-generation NBA players were raised in relative comfort. What is their motivating factor? What is the source of their hunger?

“It comes from within,” Nance Jr. said. “Everybody’s got their own motivation.’’

James famously grew up in Akron, the product of a single-parent household headed by a young mother. Nance Jr. was raised in Akron, the son of a successful NBA player.

“He grew up in a completely different environment than I had,” Nance Jr. said, referring to James. “At the same time, we’re both standing here, so it’s different motivations. He had his motivation and I had mine. For me, it had nothing to do with living up to my dad’s name — it was creating my own.”

After Golden State finished practice Thursday, I asked Thompson and Curry about the most significant influence their fathers had on their careers. Neither player mentioned X’s and O’s or being in an atmosphere of great players.

“Aside from unconditional love, probably love for the game, respect for its history and the players who came before you,” Thompson said. “If I ever needed to get advice, I could go to my dad because he’d been through it all; I actually believe I had a head start.”

“Aside from unconditional love, probably love for the game, respect for its history and the players who came before you,” Thompson said. “If I ever needed to get advice, I could go to my dad because he’d been through it all; I actually believe I had a head start.”

Thompson said the lesson his father drilled repeatedly was humility and respect for the game of basketball.

“He taught me that if you honor the game by playing your hardest and honing your craft, the game will reward you.”

For Curry, whose father, Dell, played 16 NBA seasons, the greatest gift was his selflessness.

“Mostly, it was his time growing up,” Curry said. “Knowing how busy he was playing in the NBA 16 years, he found a way to balance what he did on the court with his family life, being a presence for me, my brother and my sister.”

That gave Curry a road map he uses to this day with his own family. “Sacrificing my time,” Curry said. “Making sure I’m there for my kids to give them the same type of home environment and the same support my dad and my mom gave me.”

Nance Sr. had great individual achievements: 11 seasons as a starter, averaging 16 points and eight rebounds per game. But he never reached the NBA Finals.

“He’s already made it farther than I ever made it,” Nance Sr. said. But seeing his son play in the NBA Finals is a small part of Nance Sr.’s enjoyment. It’s having seen the journey.

“Seeing Larry get a scholarship was good; seeing him reach the NBA was great,” Nance Sr. added. “Being traded to the team I played for, seeing him wearing my jersey, that’s greater than great.”

Reaching the NBA is often called a dream come true.

For the second-generation NBA player, it’s a dream come true in duplicate.