MINNEAPOLIS — I covered my first men’s Final Four in 1985, the famous Villanova upset of the defending national champion Georgetown Hoyas.

At the time, Georgetown’s John Thompson Jr. was the nation’s most prominent Black coach. Geno Auriemma had just been named head women’s basketball coach at the University of Connecticut and Dawn Staley was a budding basketball star at Dobbins Tech High School in Philadelphia. I was in my third year as a reporter at The New York Times.

In the intervening 30-plus years, Auriemma has built UConn into a women’s basketball dynasty with 11 national titles. Staley is a legend in her own right. She has built a powerful resume: a two-time national college player of the year, an All-American at the University of Virginia, a four-time Olympic gold medalist — three as a player, one as a head coach. Now in 14 seasons at South Carolina, Staley is establishing what Auriemma began building at Connecticut in 1985.

Thirty-seven years later, in the first Final Four weekend after last year’s coronavirus pandemic-tainted tournaments, a convergence of events brought us to Minneapolis for a seismic clash between Auriemma’s Huskies and Staley’s Gamecocks for the women’s Division I national championship.

South Carolina defeated UConn convincingly on Sunday to win Staley’s second national title, but there are more titles to win in order to build a dynasty. What’s certain, and in many ways more significant, is that Staley, at age 51, has forcefully stepped in to fill the Black leadership vacuum in college basketball left by Thompson, who retired from Georgetown in 1999.

Thompson’s impact cannot be overstated. Not only coaches but also many Black journalists owe a debt of gratitude to Thompson. That includes me, Michael Wilbon, Ralph Wiley, Bryan Burwell, Kevin Blackistone and many others. Thompson fought for inclusion for Black coaches as we fought to desegregate the white world of sports journalism. Our interests converged as Thompson’s success prompted sports editors to assign Black reporters to cover Thompson’s largely Black team.

Thompson died at age 78 in 2020, a volatile year when COVID-19 turned our world upside down. That was also the year George Floyd was murdered by a police officer in Minneapolis on May 25. The video of the officer’s knee on Floyd’s neck as he took his final breath went viral and sparked global outrage and protest. The cold-blooded disregard for life and the continued violence against African Americans took center stage. Floyd’s murder took place four miles from where the women’s Final Four took place over the weekend.

Floyd’s murder at the hands of police opened eyes, sparked protests and steeled resolve to resist and fight for equality in one’s particular lane.

Staley’s lane is sports, especially women’s basketball. Floyd’s death inspired her to write a compelling essay in The Players’ Tribune the following June about how Floyd’s murder affected her. She wrote: “Some of these killings you only hear about. You hear about them, and you can only imagine. But you don’t see someone actually lying there. Gasping for air. Taking their last breath. A mother’s son. A brother. What do you say to young people who’ve seen that video?

“What do I say to my nieces and nephews? What do I say to my players? They’re like my kids. I want to give them at least some hope that what happened to George Floyd will never happen to them, but I don’t have the words. Because the truth is: That very well could happen to any of us.

Floyd’s death strengthened Staley’s resolve to be a powerful voice in the world of women’s basketball. Her continued success has elevated her platform. After Sunday’s victory, Staley talked about carrying an extra burden.

“I felt a great deal of pressure to win because I’m a Black coach,” she said. “Because if we don’t win, then you bring in so many others … just scrutiny. Like, ‘You can’t coach, you had enough to get it done but yet you failed.’ You feel all of that, and you feel it probably 10 times more than anyone else because we’re at this platform.”

On Saturday, I visited George Floyd Square for an event sponsored by the Black Coaches Association. Noelle Quinn, head coach of the WNBA’s Seattle Storm and a member of the association board, pointed out that Staley’s success was a necessary precursor to successful activism.

“She’s at the forefront of a lot of things for us,” Quinn said. “What she stands for, what she stands up for and what she represents. For me, she’s a great example of a strong, Black powerful woman who empowers people around her — her players, her staff, other Black coaches as well.”

In sports, being successful — winning — is a vital component of being an effective agent for change. Thompson won a national title, made three Final Four appearances, won several conference tournaments. Nolan Richardson won a national title. John Chaney was perennially successful. Black players wanted to play for Georgetown and Thompson, or Richardson and Arkansas. What they said mattered and the NCAA listened.

Staley is assuming the same mantle and with the same force. Top players want to play for Staley, and if not for her, then for a successful Black head coach. For that to happen, there must be more highly successful coaches. Because of that — safety in numbers — Staley has become the good shepherd and forceful patron saint for Black female head coaches.

“She’s a great example of a strong, Black powerful woman who empowers people around her — her players, her staff, other Black coaches as well.”

On her recent NetLife podcast, Staley discussed the fact that she is the only Black coach in the women’s Final Four. “When you’re not a part of the biggest weekends in the NCAA tournament as a Black coach, everybody that’s seeing that will only see who’s represented, which are white coaches — male or female. Our game is made up of so many Black bodies; they need to be coached by other Black bodies,” she said.

This season, Black women coaches represented nearly 25% of the NCAA tournament. Arizona State hired Natasha Adair as its new women’s basketball head coach and Virginia hired Amaka Agugua-Hamilton. Both coaches are Black — as are both school’s athletic directors. “It is our time now,” Staley said. “It is the movement of female Black coaches, which I’m superproud of, but we still got work to do.”

Just as Thompson advocated for Black women as part of his responsibility, Staley has advocated for Black men. “I got to shout out our brothers out there who aren’t getting opportunities,” Staley said. “I know we were all for pushing forward Black women, but our Black men have been in our game for a long time as assistant coaches that need an opportunity to run their own programs. They shouldn’t just be pigeonholed into being assistant coaches.” 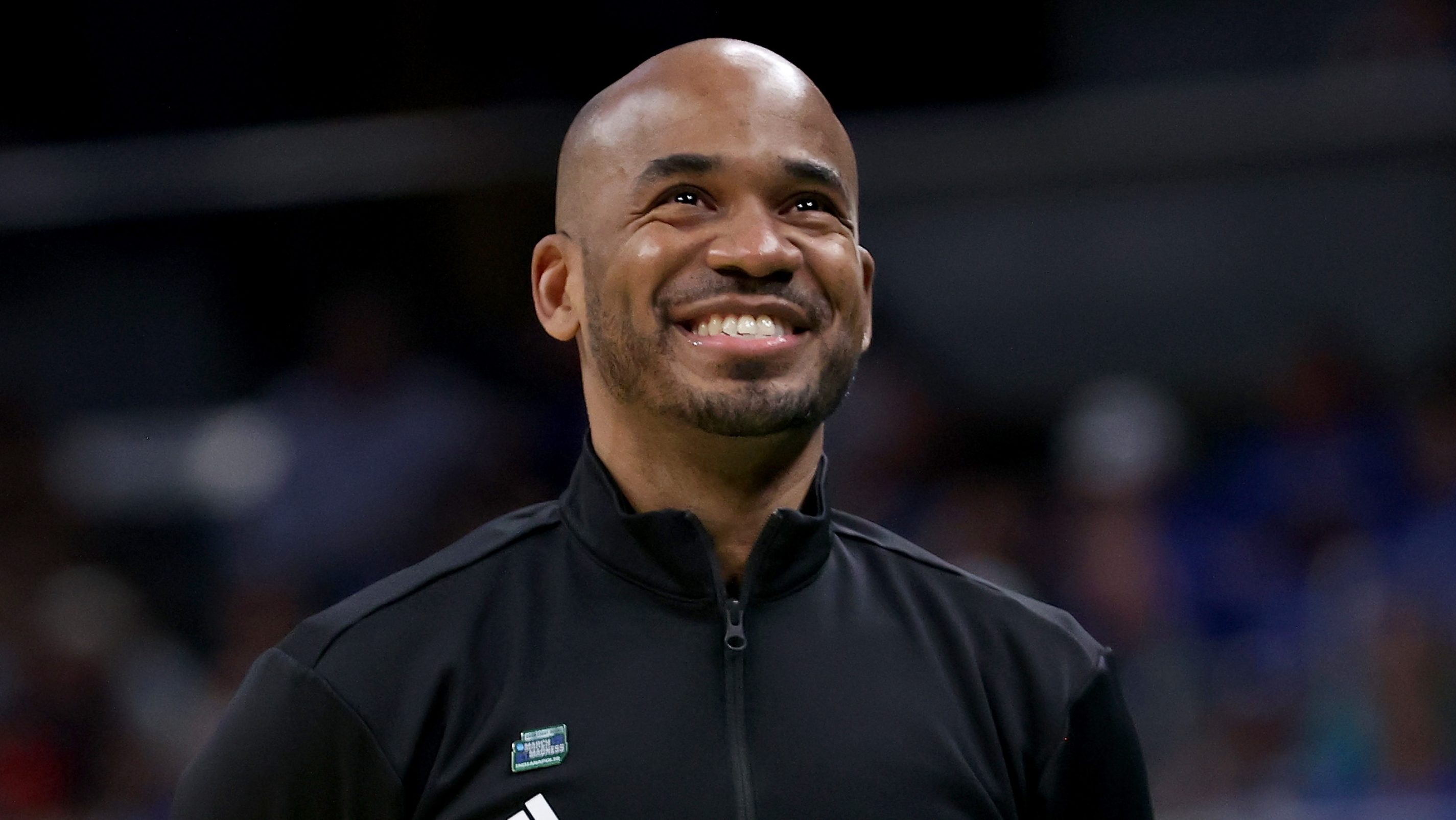 In 1989, Thompson walked off the court before a game in protest of an NCAA proposition that threatened to deny scholarship opportunities for Black athletes.

There may not be an issue significant enough to force Staley to take such dramatic action. What we do know is that Staley, like Thompson, is bold enough — and powerful enough — to take dramatic action if it’s deemed a necessary or effective tactic.

In 1999, Carolyn Peck led Purdue to a national championship, becoming the first Black woman to achieve that feat. After watching Staley lead South Carolina past UConn on Sunday, Peck, now an analyst for ESPN, summarized the importance of a second championship.

“Winning one, they can say it was a fluke. She’s won two, which shows she knows how to get it done,” Peck said.

Thirty-seven years after that 1985 Final Four, the world has shifted and the world of women’s college basketball continues to evolve. And Staley has emerged as her generation’s John Thompson — a leader of monumental importance.