Sidney Poitier changed what a movie star looked like

There he was in a sharp black tuxedo, tidy black bow tie and a smile that lit up the entire red carpet.

Sidney Poitier, who died Jan. 6, was Hollywood royalty, and at the 2014 Academy Awards, he was walking toward me with his date for the evening, his daughter Sydney Tamiia Poitier, her hand clasped in his.

I’d met Sydney Poitier years earlier — she was trying to navigate the world that her father had famously conquered, breaking ground for many, many Black actors and directors in Hollywood. Though none of us knew it at that moment on that red carpet, the 2014 awards show would prove to be a colossal year for recognizing Black talent in Tinseltown.

A year before #OscarsSoWhite burst into the country’s collective consciousness, so many of us were talking about the race problem in Hollywood. We had to. We’d all seen the lack of progress, and how much Black-led/Black-created/Blackness period was routinely overlooked at the most prominent celebration of the year’s best in cinema. And for a moment, 2014 felt like a year that we could potentially see some change on the horizon.

And Poitier, who was the first Black man to win a best actor Oscar for his role of Homer Smith in 1963’s Lilies of the Field, was there.

Poitier and I exchanged hugs and I blurted out that somewhere in heaven all four of my grandparents were smiling down at this moment. Their granddaughter was talking with one of the most game-changing figures in Hollywood. Here was the actor who got my beloved ancestors to watch cinema because he was present and found himself in spaces that Black people, especially Black men, simply couldn’t access. They’d love to have seen that.

Sidney Poitier stars as detective Virgil Tibbs in the film "In the Heat of the Night." (Photo: Silver Screen Collection/Hulton Archive/Getty Images)

Mark Thackeray (Sidney Poitier, center) dances with his students in the 1966 film "To Sir, with Love." (Photo: John Springer Collection/CORBIS/Corbis via Getty Images)

Bill Cosby (left) and Sidney Poitier (right) in a scene from the film "Let's Do It Again." (Photo: Allied Artists/Getty Images)

Sidney Poitier as Buck in the 1972 film "Buck and the Preacher." It was the first movie Poitier directed. (Photo: John Springer Collection/CORBIS/Corbis via Getty Images)

Sidney Poitier (left) and Tony Curtis (right) in the film "The Defiant Ones." (Photo: FilmPublicityArchive/United Archives via Getty Images)

Poitier nodded and smiled. He understood not only what that moment meant for me, but also the importance of his contribution.

“There were many people who went before me, and they made the room for me,” he told me. “And it was my responsibility to try as best I could to make room for those who will follow. And that kind of chain, I think, would describe how we have moved along.”

That night was historic. And his career of bringing beautiful Blackness to the silver screen was essential to it happening at all. 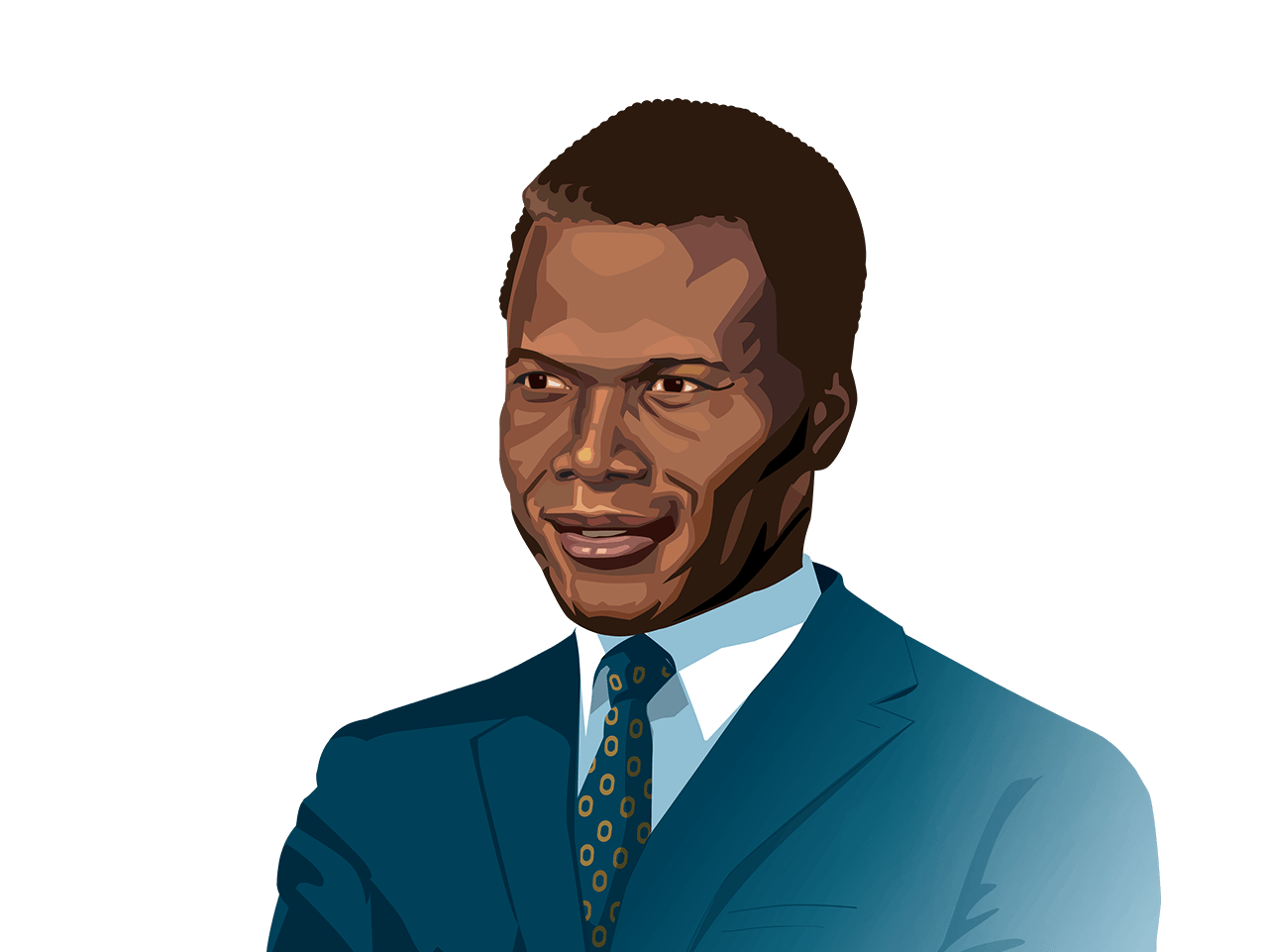 The Undefeated 44 most influential black Americans in historyRead now

The 86th annual Academy Awards was easily the most diverse telecast that ever aired to that time. An unprecedented number of Black presenters and performers took the stage — Kerry Washington, Will Smith, Michael B. Jordan, Tyler Perry, Jamie Foxx and Pharrell Williams, all had moments.

As that night closed, Poitier had to be a proud papa.

There’s so much to cite with regard to Poitier’s work — but let’s focus on the marquee year of 1967. The films that Poitier starred in that year were seminal — they all centered on race and race relations and tapped into conversations everyday Black folks were having around their dinner tables. To Sir, with Love dealt with racial and social issues at a school in London’s East End. In the Heat of the Night introduced us to a Black detective investigating a murder in a small Southern town. And Guess Who’s Coming to Dinner addressed interracial relationships. This was the same year that a landmark Supreme Court decision invalidated laws prohibiting interracial unions and Thurgood Marshall was confirmed as the first African American Supreme Court justice.

Although he was born in Miami, Poitier grew up in his parents’ native Bahamas. He came back to the States when he was 15, and after a brief stint with the Army during World War II, he found his calling. He earned a spot as a member of the American Negro Theatre, and by the end of the 1940s, he was dipping his toe in film.

Poitier will be remembered as one of the most revered actors — Black or otherwise — of all time. But even with his stellar acting career, perhaps the most important thing Poitier did was to understand the importance of having someone who looked like him step behind the camera and direct. Visual presence is paramount, and power lies in the hands of those who can shape that presence. He helmed a number of important cinematic moments for Black folks, including Uptown Saturday Night (1974), Let’s Do It Again (1975), both of which he also starred in, and the iconic comedic ebony-and-ivory pairing of Richard Pryor and Gene Wilder in Stir Crazy (1980).

“The best advice he’s ever given me is to really be true to yourself. To remember who you are. This is a business where so many people are going to be wanting so many different things from you,” his daughter told me in a 2007 interview. “If you allow your energy to be pulled in all those different directions, then you are dissipating who you essentially are and you’re lessening your voice as an artist and as a human being.

“You have to constantly remind yourself that ‘I am the captain of my own ship. Nobody else can define me; I define me.’ I go back to that all the time,” she shared back then. “There’s a lot of fear of rejection. This is a really hard business: You’re too tall … You’re not pretty enough. You have to just remember who you are and what your purpose is and what your real talents are and leave it at that.”

He knew what his purpose was. Always. Even when he should have been able to just create and execute, he was always hyperaware that what he did was far bigger than anything in the script.

Poitier’s mere presence was activism. One of his biggest impacts would be to help change the narrative of how Black men are portrayed in film, and thus how they could be and should be regarded in real life.

As I wrote several years ago, Poitier “challenged the American box office — and thus, the average American — about what a movie star looked like.”