A month after organizers announced that the 2020 Summer Olympics in Tokyo would be postponed until the following summer due to the ongoing coronavirus pandemic, Jamaican sprinter Shelly-Ann Fraser-Pryce told British broadcaster Sky Sports that the 2021 games and next year’s world championships “could definitely” be the last major competitions of her career.

Fraser-Pryce burst on the scene at 21 years of age during the 2008 Games, shocking the track community by taking gold in the 100 meters, a title she defended in 2012. All told, Fraser-Pryce has won eight Olympic medals (three gold, four silver, one bronze) and 11 world championships medals (nine gold, two silver), making her the most accomplished women’s sprinter in history. An accomplished resume worth riding off on into the sunset.

But after losing a year of competition with pandemic lockdowns, and posting some of the fastest times of her nearly two-decade career over the past few months, Fraser-Pryce, 34, says she’s holding off retirement until at least after the Paris Games in 2024. The diminutive sprinter, known as “Pocket Rocket” and “Mommy Rocket,” believes that she still has more left to give to the sport that has already given her so much.

“To be running the times I have been running this season is just really crazy,” Fraser-Pryce told The Undefeated. “I am one of those persons who believe that I want to push that barrier. I want to set that bar that other athletes coming can see that you have time.

“Because it didn’t happen a couple of years ago in your 20s doesn’t mean it cannot happen in your 30s.”

What’s helped Fraser-Pryce as she’s gotten older is changing her perspective on not only her professional career as an athlete, but as a person. She values peace, which she says has sparked a new drive and passion in her. Part of that peace came after the birth of her son, Zyon, in 2017, which prevented Fraser-Pryce from being able to defend her 100-meter title at that year’s world championships in London.

“As an athlete, you thought, ‘Oh, my God, you lost something. You lost that medal.’ [But] I gained so much strength, so much wisdom,” she said. “Coming back and looking at my son and knowing that, ‘OK, I went through this,’ and now I’m … going to take my experience with that. And also my experience being an athlete for such a long time, I’m going to put those together. And I think with all of that, you’re definitely undefeated.”

Her performances in recent months – a personal best of 10.63 seconds in June, placing second at the Olympics in early August, running another personal best (and third-fastest time) of 10.60 on Aug. 26 – have made Fraser-Pryce even more hungry to chase that elusive third gold medal in the 100-meter dash, which has never been done by a female sprinter.

“I was excited,” Fraser-Pryce said of running the 10.60 at the Athletissima meet in Switzerland. “I was happy, but I was still, in the back of my head, like, ‘This is still not it.’ There’s so much more to come, and I’m excited about it because it’s almost that, layer by layer, you peel back the greatness that you know is inside of you.”

She might also be sticking around to continue to chase an elusive milestone that she’s referenced for many years. In 1988, Florence Griffith Joyner finished the 100 meters in 10.49 seconds, a world record that has stood for 33 years. Fraser-Pryce has mentioned how unattainable Joyner’s sprinting records (Joyner also holds the world record in the 200 meters) have been for female sprinters since that time, but she now believes that after the times she, teammate Elaine Thompson-Herah and other women have posted over the past few months that the record could fall someday soon. Three of the top six fastest 100-meter times were set this year, including Thompson-Herah’s second-best 10.54 seconds at the Prefontaine Classic in Eugene, Oregon, in August. 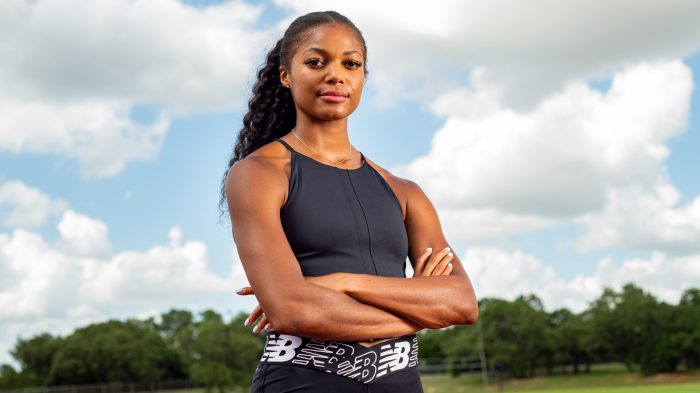 “When you see other women pushing that barrier and doing something that you know you are also capable of, it gives you more renewed fire to get back to work, because if they can do it, you can do it too,” Fraser-Pryce said.

Fraser-Pryce credits maturity and emphasizing recovery as reasons she’s running her best times 13 years after her first Olympics. In her younger days she could, for instance, party and drink while in competition, but these days she has to be more strict with her diet and her schedule. She no longer eats processed or junk foods. Her husband, Jason Pryce, is a pescatarian who is leaning toward veganism, which Fraser-Pryce, who still enjoys fried chicken, hasn’t taken up just yet.

To keep her legs fresh, Fraser-Pryce doesn’t race every chance she gets. She and Thompson-Herah ran the 100 meters on Aug. 26 in Switzerland as a part of the Diamond League circuit. Thompson-Herah suited up again two days later in Paris, but Fraser-Pryce skipped that leg of the tour, citing fatigue. She hadn’t returned to her Switzerland hotel until the early morning hours of Aug. 27 and would have had to hop on a train to France immediately on minimal sleep to run again a day later.

“I’m more intentional. Definitely have a laser focus, need to get this job done,” she said. “I’m depending on me, my son is depending on me, other women are depending on me to show them what’s possible, what we can do when we start to believe in ourselves, and actually putting in that work and disregard the opinions of anybody else that doesn’t enhance what we do.”

With as much success as she’s had in track and field for nearly two decades, Fraser-Pryce recognizes that she’s an anomaly in her home country. Track, she says, is life and death in Jamaica. As Fraser-Pryce recently wrote in The Players’ Tribune, high school track rivalries are on par with the collegiate level in America. The country has had a rich history in the sport for decades – Merlene Joyce Ottey and Arthur Stanley Wint, to name a few – but 2008 marked the turning point for Jamaica, bringing with it immense pride from the small island of nearly 3 million.

At the 2008 Games in Beijing, the Jamaican men and women won five of the six sprinting events and would have won all six had the women’s relay, which Fraser-Pryce was a member of, not botched a baton exchange. Led by Usain Bolt, the Jamaicans were now the premier track program in the world.

“When I was growing up, I didn’t think I would come this far, because I normally look up to them and I want to be like them,” Thompson-Herah said of Fraser-Pryce and Bolt to the Olympic Channel. “They were already running Diamond League, going into championships, and I always wanted to be like them. So I aimed to work hard and be like them.”

But unlike their counterparts in America, Jamaicans lack the infrastructure and resources that athletes of their caliber deserve. Not to mention the lack of resources on the island, which has been plagued by poverty and violence that can be traced directly to British and Spanish colonization between the 16th and 20th centuries.

Growing up in the project homes of the Waterhouse community in Kingston, Fraser-Pryce was surrounded by gang violence and poverty, and if not for the goodwill of a woman who helped pay for her schooling, she likely would have never made it as an Olympic sprinter.

Which is why Fraser-Pryce has been determined to pay it back since she first won gold in 2008. Two years after Beijing, Fraser-Pryce was named a goodwill ambassador for UNICEF Jamaica. She founded the Pocket Rocket Foundation, which awards high school scholarships to athletes in Jamaica, in hopes of providing opportunities for those with similar backgrounds as her. Since 2013, the foundation has awarded at least 41 scholarships to Jamaican students, not to mention the assistance sponsors such as Nike and Digicel have provided.

“I believe there’s so much more Shelly-Anns that are there that just need that support and that commitment,” she said. “So I’m committed to them. I’m committed to see that if I tried to help a dozen, and only five make it, then I’m good with that because otherwise it’s hard, it’s difficult because of what we’re surrounded by. There are so much negative that’s happening, that they need a positive.”

No conversation about sprinters can be had without mentioning Sha’Carri Richardson, the colorful and seemingly controversial American sprinter who was one of the 100-meter favorites heading into Tokyo but was suspended from competition weeks before the games began.

Fraser-Pryce has kind words to say about the young sprinter.

But Richardson began to court controversy before and during the Olympics. At the trials, she told reporters that while she respected the veteran sprinters “for putting on for our sport. … At the end of the day, when we get on this line, what you’ve been doing, you have to do that against me.” A day before the women’s finals of the 100 meters in Tokyo, Richardson cryptically tweeted “Missing me yet?” which could be construed as a slight to the sprinters not having to face her.

Two weeks after the Olympics, the women’s 100-meter at the Prefontaine Classic was billed as “The Race That Could Have Been,” with Richardson facing Thompson-Herah, Fraser-Pryce and Shericka Jackson, the Jamaicans who finished 1-2-3 in Tokyo.

Despite the bombast that preceded the race, Richardson was slow out of the blocks and never recovered, finishing in last place. During Richardson’s postrace TV interview, where she emphatically exclaimed that “I’m not done,” Fraser-Pryce, who finished in second place behind Thompson-Herah, walks behind the interview, almost giving a smirk and knowing glance at the camera.

Fraser-Pryce said it was just a look.

Does she believe Richardson has been respectful of her and the other Jamaicans throughout the past month?

That being said, Fraser-Pryce argues that tension and rivalries are good for women’s sports. The careers of famous male athletes such as Mike Tyson, Muhammad Ali, Michael Jordan and, of course, Bolt, were built either on tense rivalries or notorious showmanship. One of Fraser-Pryce’s favorite athletes, basketball great LeBron James, is celebrated for his tenacity and bravado, “but for us as women, we’re somehow supposed to just stand at the line, look cute and just run, [and] wave. We’re not allowed to express ourselves or show our emotions.”

Women, she says, work just as hard as the men in the sport, and should be perceived the same as the male competitors. Whether through furthering her own established career or nurturing the future female competitors of Jamaica, Fraser-Pryce is taking the steps to change that perception.

“When I step to the line, I’m not there to hand you flowers and comb your hair. I’m there to win,” she said.