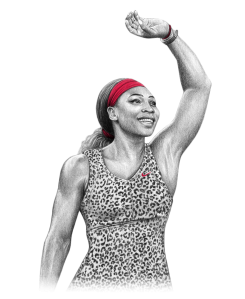 2014 US OPEN FIRST ROUND AGAINST TAYLOR TOWNSEND 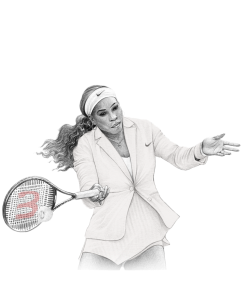 Serena was forced to retire from the match after appearing disoriented and double faulting. Rumors swirled that she was either drunk, on drugs or was pregnant, all of which she denied. Pity that the controversy overshadowed one of her classiest on-court looks. Extra points awarded for her soft, pretty hairstyle and elegant cat-eye makeup.

2008 US OPEN FINAL AGAINST JELENA JANKOVIC

Care to see the most spontaneous expression of adult joy from the best athlete in the world? It happens at the end of this match when Serena — resplendent in a fiery red dress, matching headband and nails — tosses her racket in the air, screams like a kid and jumps … and jumps … and jumps. Epic and wonderful.

2002 US OPEN QUARTERFINAL AGAINST DANIELA HANTUCHOVA

Ah, yes, the infamous black “Catwoman” outfit. Safe to say the 21-year-old Wimbledon champ raised a few eyebrows when she walked onto the Arthur Ashe court wearing this Lycra second-skin shorts (really short) suit. Serena later told reporters, “If you don’t have a decent shape, this isn’t the best outfit to have.” Buuuuurn! 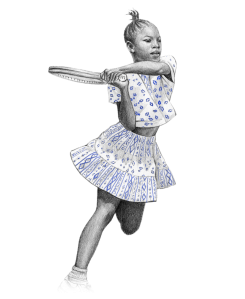 Five years before she placed in her first World Tennis Association semifinal in Chicago, 11-year-old Serena was perfecting her serve and practicing her powerful backhand on public courts in Compton, California. This matching two-piece outfit and her sweet signature braids gave us a glimpse of her future chicness.