Scoot Henderson focuses on himself in pursuit of No. 1 in the 2023 NBA draft

Elite guard prospect discusses competing for the top spot with Victor Wembanyama, contributing in his community and playing for the G League Ignite

LAS VEGAS – Scoot Henderson is the rare American teenager who is not heavily into social media. So when 7-foot-3 basketball phenom Victor Wembanyama boasted Monday that Henderson would be selected No. 1 in the 2023 NBA draft if Wembanyama hadn’t been born, the G League Ignite star missed it for hours.

Henderson’s teammates, however, showed him the quote while attending a reception that also included Wembanyama and his Boulogne-Levallois Metropolitans 92 team on Monday night, sources at the event said. Mere moments after Henderson saw the quote, he was scheduled to swap autographed team jerseys with Wembanyama in a ceremony in front of players and coaches from the G League Ignite, Boulogne-Levallois Metropolitans 92 and G League officials. The uber-competitive Henderson was stone-faced, gave a quick smile for the cameras, swapped jerseys, and didn’t shake hands with Wembanyama before departing on the eve of their highly anticipated televised showdown, sources said.

“I don’t listen to that. I don’t pay no mind to that,” Henderson told Andscape of Wembanyama’s quote before Tuesday’s exhibition game. “You can talk all you want. That’s it. No added fuel. I’ve had the same fuel. I was going to come out and kill regardless.”

Wembanyama was the talk of the basketball world after he scored 37 points, made seven 3-pointers and had five blocked shots on Tuesday night as the Metropolitans 92 lost 122-115 to the G League Ignite in an exhibition game in Henderson, Nevada.

NBA general managers, including the Los Angeles Lakers’ Rob Pelinka, Oklahoma City Thunder’s Sam Presti, Charlotte Hornets’ Mitch Kupchak, New York Knicks’ Scott Perry, and Utah Jazz’s Justin Zanik were among the 120-plus NBA personnel on hand to scout the 18-year-old Frenchman’s first game on American soil. Jonathan Givony of ESPN currently lists Wembanyama as the No. 1 prospect in the 2023 NBA draft, and he is widely considered the generational talent due to his all-around skill set at a giant height. 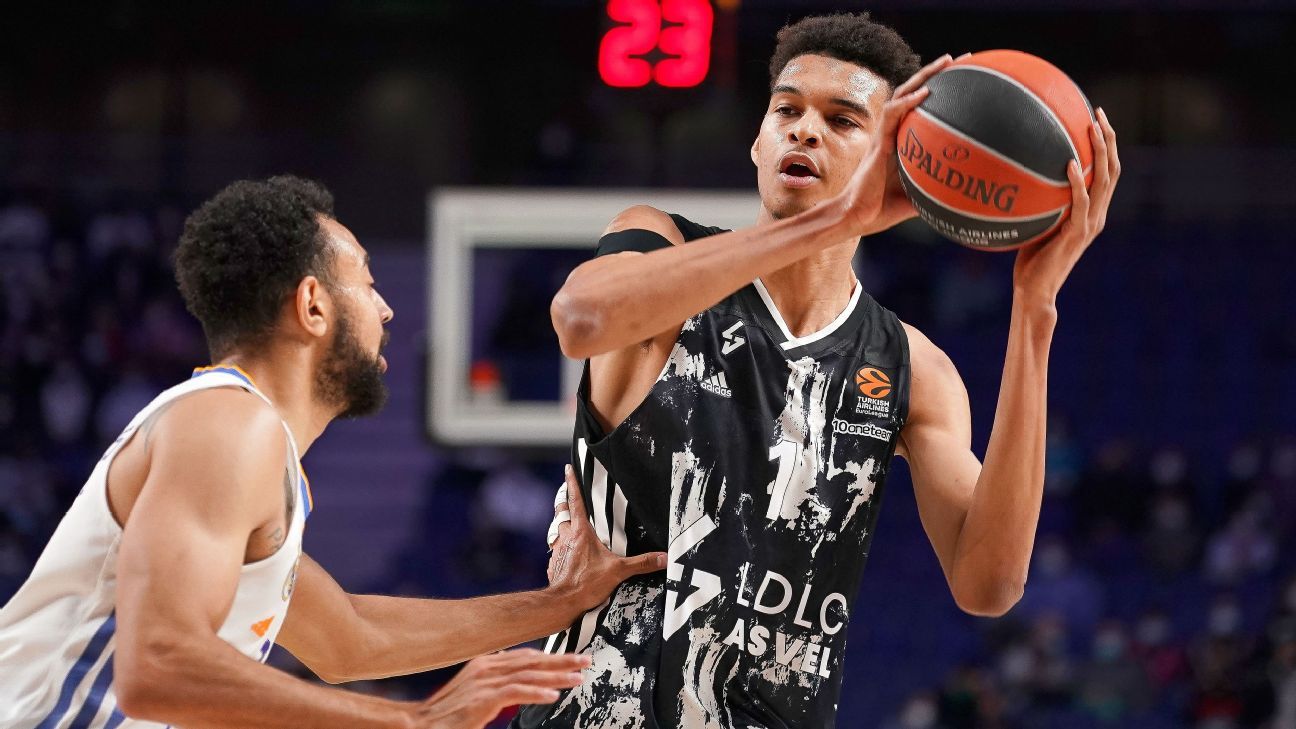 Henderson also played up to his projection with team highs of 28 points and nine assists. Current and former NBA stars Chris Paul, Devin Booker, DeMarcus Cousins, and Trevor Ariza were in attendance, as well as WNBA Las Vegas Aces stars A’ja Wilson and Chelsea Gray. The teams will square off again in Henderson on Thursday in a game that will air on ESPN2.

While Givony ranks Henderson respectfully as the No. 2 prospect, the 18-year-old is a fierce competitor and hasn’t conceded the top spot.

“The No. 1 draft pick, that’s the main goal,” Henderson told Andscape. “I’m blessed and honored to be in the position I am in, in people’s eyes. But that really never mattered to me. My competitiveness, my spirit, it makes me want to be No. 1 in everything I do and be great in everything I do. That is my main goal.”

Even with the understandable adulation of Wembanyama, only one NBA team can draft him, and NBA scouts are also very much attracted to Henderson as a prospect. The Atlanta native will enter the NBA next season with two years of G League experience under his belt before the age of 20.

“We know Victor is going to be top pick as he possesses generational talent and skill,” one NBA general manager told Andscape. “He moves like a small forward. Many teams will be positioning themselves all season to have a shot at drafting him. But Scoot is a very talented player who is more score-first point guard at this stage.

“I really like his competitive spirit and he appears to be coachable, which is important for that position. He seems to embrace big moments and challenge. Very good athleticism and strength for a young player. I would like to see him improve his one-on-one defensive focus, given his physical tools.”

The following is a Q&A with Henderson, who talked to Andscape about his development with the Ignite since joining before what would have been his junior year in high school, his off-court endeavors, being on his own for the second straight year at just 18 years old, moving to the Las Vegas area, the basketball gym he owns in his hometown of Marietta, Georgia, and much more.

How do you feel after suffering a bone bruise against the Metropolitan 92 on Thursday?

I feel good and healthy, it was just a little bump and wanted to be safe. Most importantly, I really just wanted to be out there for the fans fighting with my team. Thankfully, I am healthy and God has bigger and better things for me. I appreciate the concern and I will see y’all soon, November 4.

Do you think you and Wembanyama will have a rivalry going forward into the NBA and forever connected?

You had an opportunity to play in the 2022 Rising Stars Challenge during NBA All-Star weekend with the league’s top young players. What was that experience like?

I was on top of the sky in my head. Very high on confidence. Just ready to work. Ready to get back at it again. I was thinking about how far I came … I was in the Rising Stars game! Being around the other guys, I felt like I belonged there. 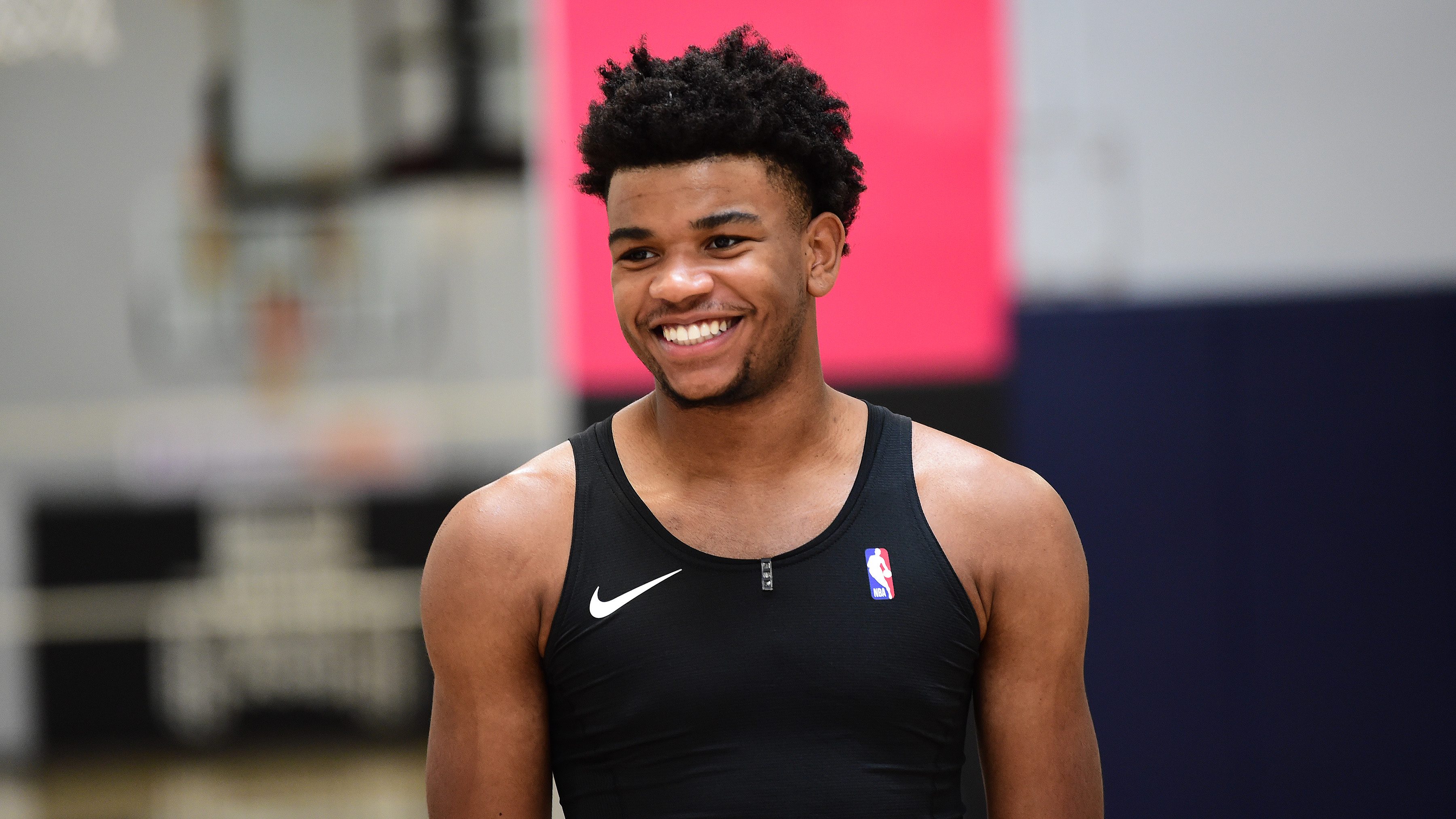 What is your mentality being so close but yet so far away from NBA draft day 2023?

The G League Ignite were headquartered in Walnut Creek, California, last season and are now in the Las Vegas area. Do you have to be careful about what you do being so close to the Las Vegas Strip?

Our games are in Henderson, a great city. This is a new basketball journey for sure. On-the-courtwise, I feel like I’m getting into the leadership role and bringing my teammates along.

You and your family purchased a gym in your hometown of Marietta, Georgia, called Next Play 360 that is operated by your parents. How amazing was it for you at your age to purchase a gym for use in your hometown?

They know me as a person, and I wanted to give back to them and my community in Marietta. Give back to my gym and that is Next Play 360. Fund my gym in Marietta with me and my family over the summer. It felt good to have my first [basketball] camp, a Junior NBA camp. We had some overseas guys come into the camp as well. It felt great being in that community even miles away from there. Going there seeing the little guys and little ladies having fun. That is my main thing, having fun. It’s not like any gym. It’s a community gym.

You signed a very lucrative two-year deal with the Ignite. How do you manage your money?

My mom. I went to this Wealth Summit before I came to the Ignite to learn about strictly money. To be smart with it. Just to invest in the right things. To do what you want to do, not do what you people come up to you and talk about. I have a great agency, Par-Lay Sports with Christian Dawkins. Really just myself and my mom.

What is the difference between your body now and a year ago?

My body is not as heavy. Last year, it was very strong and muscular. I wasn’t focused on long-termwise. My main goal this summer was to lean out. Maintain the same strength. The same body compact I have.

How will being part of the Ignite help you off the court when you enter the NBA?

I don’t know too much about how guys are off the court stepping into their rookie year coming from college. I feel like the Ignite program is perfect for me to get ready for that. I may be alone, have my family away, shopping on my own. Things like that. It forced me to grow up. It’s easier for me this year. I am not going to say it’s always easy having my family away, since I grew up with family. But it’s getting easier.

I am cooking. I can cook a good turkey burger. But they got Uber Eats here and they give us meals.

What are your goals and mentality with the Ignite this season?

To win a lot more games than we had last year. To have a winning record and win the championship if they let us get in that bracket. To win.

You can control what you can. I’m going to keep working. God is going to give me many opportunities. As long as I stay down, stay levelheaded, the sky is the limit.