NEW YORK — There’s a quick double-take from the burly guy assigned to the door of the trendy steakhouse as he glances at the slim man with the salt-and-pepper hair stepping out the establishment’s entrance. “Is that Rod …,” he whispers to his buddy next to him and before he completes his thought the subject of his gaze nods.

“Yo, that’s Rod Strickland,” the 40-something employee says excitedly.

Point. God. A lofty title long bestowed to the trueborn point guards who have demonstrated greatness on the basketball courts of New York City. For Strickland, the royal status is well earned: a state champion in high school in the Bronx; an All-American at DePaul University; and a stellar 17-year career in the NBA, where he’s currently 13th all-time in assists.

Strickland returned home this year to New York City, where he’s the coach at Long Island University. It’s a first time head coaching gig for Strickland, who arrived at the NEC school after a stint in the NBA G League, where he was the program director of the G League Ignite.

The mission in front of Strickland is arduous: His start date was July 1 (LIU fired Derek Kellogg on June 29), a time when the transfer portal was closed.

The sudden change in leadership of a squad that finished 16-14 in the league last season led to a tension-filled meeting with his new team just days after he was hired.

“It wasn’t an easy transition, everything happened all of a sudden,” said senior Tre Wood. “He didn’t come in trying to be controlling or trying to be like a boss. He was straightforward with dudes and said, if you want to be here and lock in with this change, or if you felt like you didn’t, that was fine.”

The result: Four players who were expected to be the top returning scorers left, leaving LIU with a young, inexperienced team and a tremendous challenge for a first-year coach.

“It was an awkward situation,” Strickland said. “Some guys left. I’m just excited to work with the players who stayed, and who want to be here.”

Rod Strickland the basketball player, in his prime, was considered one of the best point guards in the game. A scoring threat — he had an uncanny ability to finish around the rim against much bigger players.

Combine that with incredible court vision that has him ranked 13th on the all-time NBA assist list, and you understand why he was described in the recent NYC Point Gods documentary on Showtime as “your point guard’s favorite point guard.”

The thought of coaching basketball came late in Strickland’s NBA career, which spanned nine teams over his 17 seasons.

“I wanted to give it s shot, but it was a situation of let me see, let me try it out, because I needed something to do,” Strickland said. “When I went to Memphis [director of basketball operations under John Calipari], I was still trying to deprogram as an NBA player.”

Strickland followed Calipari to Kentucky and later worked as an assistant coach at South Florida (Calipari’s son, Brad, is LIU’s director of player development — a holdover from Kellogg’s staff). In 2018, Strickland joined the G League as the program manager for professional path program, a position that later morphed into program director of the Ignite, a developmental team in the G League.

“Without that,” Strickland said of the Ignite experience, “I don’t get to this.”

When asked his thoughts about this new, gentrified Brooklyn — high-rise condos downtown cost millions, and the new 35-story luxury apartment building just a few feet away from the school’s gym will set you back more than $6,000 per month for a two-bedroom, two bathroom penthouse apartment, Strickland shrugs.

“New York is home. I lived here much of my life and I played in these streets and got a lot of love here,” Strickland said. “But I’m from the Bronx, and while I’d come back to New York to see my friends and family, I never really spent a lot of time in Brooklyn. I don’t know this new Brooklyn.”

Strickland will discover that the “new Brooklyn” that surrounds LIU’s campus — the prime shopping area, high-end real estate, the fancy food hall and the Trader Joe’s all just across Flatbush Avenue — can be used as a recruiting advantage. It’s a far cry from the grimy downtown Brooklyn shopping area, and the walk-at-your-own-risk streets that surrounded the campus two decades ago.

Charles Jones, the newly hired special assistant to Strickland, knows. The Bedford-Stuyvesant native navigated the tough streets of Brooklyn as a kid before landing at the school where he led the nation in scoring (30.1 points per game) during the 1996-97 season.

“I look around what’s going on around this area and I can’t believe it,” said Jones, an LIU Hall of Famer who played his games at the Paramount Theater gym on Flatbush Avenue directly across the street from the well-known Junior’s Restaurant and Bakery. “I’m thankful that Rod gave me a chance to come back. I think he has a real chance to create something special here.” 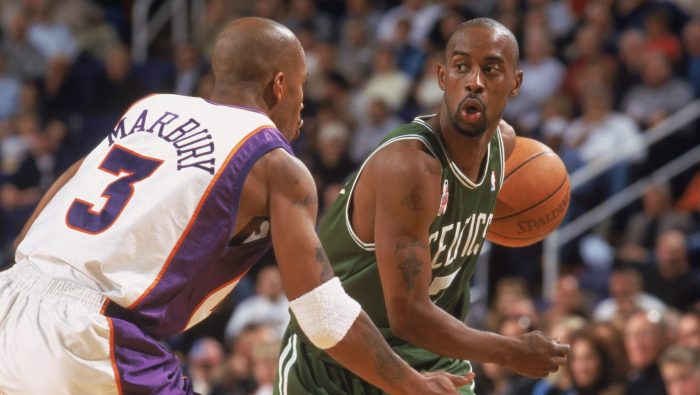 “Charles, I’m superglad I brought him because he reminds me of me and I wanted to give him an opportunity just like Cal [John Calipari] gave me an opportunity,” Strickland said. “And Mo Hicks, he’s New York royalty. Everybody loves him, respects him and he has a great basketball mind.”

Additional hires by Strickland include assistant coach Chris Thomas, who most recently worked as an assistant coach with Raptors 905 (Toronto Raptors G League affiliate); and assistant coach Shasha Brown, who was the director of basketball operations at Vanderbilt under Jerry Stackhouse.

“Everyone we brought in, they’re good people,” Strickland said. “They’re going to come in here and help me get better.”

What Strickland immediately learned after taking the job over the summer was that a lot of people wanted him to excel.

Chauncey Billups, an NBA champion now coaching the Portland Trail Blazers, sent him a text saying he was available if Strickland had any questions.

Mark Jackson, his former teammate with the New York Knicks who coached the Golden State Warriors for three seasons, called to give Strickland tips on how to deal with this staff.

When Strickland’s phone rang a few weeks ago he was surprised to hear the voice of a coaching legend on the other end. “You’re a good guy,” Duke coach Mike Krzyzewski told him. “Just be you and keep things simple.”

The advice Strickland has received has been helpful, but if he wants to achieve success, he knows he’ll have to tap into the knowledge he soaked in from all of the coaches who helped guide his career.

What he learned from Pat Riley, president of the Miami Heat: “Mean what you say and say what you mean. He wasn’t afraid to talk to everybody the same way, and he was willing to do whatever was necessary to win.”

From Rick Pitino, Iona College coach: “A fiery guy, but a technician.”

From Larry Brown, veteran NBA and college head coach: “A great thinker who was a solid X’s and O’s kind of guy.”

From Rick Adelman, former NBA coach: “A great people person who helped instill confidence in me.”

From Calipari: “I used to go to Cal’s office and ask why he did certain things. And I learned a lot from all of those conversations, an understanding of what he was thinking.”

“I’ve been the f—ing personality.”

As the LIU practice concludes, Strickland pulls Wood aside and offers a few words of wisdom.

Strickland, as a player, was a coach on the floor directing traffic and putting players in places where they could best excel. That’s the weight he’ll place on the shoulders of Wood, a 6-foot-1 senior point guard who started 30 games last season.

Wood, 23, knew Strickland had played in the NBA. But he didn’t know the true impact of his coach until he began watching videos of Strickland on social media.

“My uncles, my father — that was their go-to point guard back in the day,” said Wood who’s from Largo, Maryland, not far from the Landover, Maryland, arena where Strickland played with the Washington Bullets for a season before the team moved to downtown Washington in 1997 and were rebranded as the Washington Wizards. “I looked at videos and got myself familiar with the style he wants me to play.”

Wood has learned quite a bit in the short time he’s spent with his new coach.

“I’m picking up how to be creative around the rim, different floater finishes and knowing how to get to my spot on the mid-range jumper,” Wood said. “I’m just trying to be a sponge, and he’s working with me and giving me confidence to basically be a point guard.”

Wood is LIU’s top returning scorer (6.5 PPG last season, his first as a starter). This season Strickland will have to rely on contributions from a couple of players who played limited minutes last season and a few transfers, which basically means when the season begins at Utah on Monday, this will be a team of unknowns.

“We’ve grown each day we’ve been together,” Strickland said. “As a first-year coach, I want to rely on my staff who are there to help me, and to make sure my ego doesn’t get in the way.”

When asked what will constitute a good season in his first year as head coach, Strickland contemplates for a moment before answering.

“If that happens, I think that’s a win.”

How soon does Strickland think he can completely change the environment and culture?

“I’m not in a rush,” Strickland said. “We’re making strides, and that time is coming.”