The rise of Obi Toppin: ‘We didn’t know he would morph into this great player’

It’s the summer of 2016 and Mt. Zion Prep coach Roderick Harrison is sitting courtside at New York’s Dyckman Park at the request of a friend. The friend wants Harrison to consider offering a post-graduate prep season to a player named Obi Toppin, a teenager from Westchester County who just finished his high school career with little more than a few juco offers.

While Harrison wasn’t overwhelmed with what he first saw in Toppin physically — a tall, skinny kid who looked like he’d never even considered entering a weight room — he immediately offered Toppin a scholarship based on his potential.

“He had the attributes you want in a player with his athleticism and ability to run the floor, that grabbed my eye right away,” Harrison said. “He was 170 pounds when he got here, and we saw him as a boy, definitely not the man that the world is seeing today.”

Toppin was a lanky player who lacked complete confidence in his abilities when he got to Mt. Zion Prep. He was a far cry from the rim wrecker who averaged 20 points and 7.5 rebounds during his sophomore season at Dayton on the way to becoming the school’s first consensus All-American and the national college player of the year.

On Wednesday, Toppin’s unlikely rise will continue as a projected NBA lottery pick. No one in Toppin’s orbit could have imagined this scenario five years ago.

Toppin grew up around the game. Born in Brooklyn, New York, he is the son of a New York City basketball figure, Obadiah Toppin, who played college basketball at Globe Institute of Technology before becoming a streetball legend known as Dunkers Delight.

While Obadiah Toppin played professionally in the Dominican Republic and with the Brooklyn Kings in the United States Basketball League, he’s best known as a member of the Court Kingz, a once-popular streetball team that sold out gyms while touring the nation.

“He was tough, long and no one could really guard him. He was so strong,” said Kareem Lewis, who played at Coppin State before becoming teammates with the elder Toppin in the late 1990s and early 2000s on the Rodney Park all-stars team that played in leagues at Rucker Park and West Fourth Street. “I remember he was the only guy that had his wife and sons [including Toppin’s younger brother, Jacob, who will play this season at Kentucky] with him at almost every game.”

When the family moved from New York to Florida, Toppin wasn’t able to participate in the competitive AAU circuit. When he moved back to New York with his mother ahead of his junior season in high school, his basketball skills were far from polished.

“Obi was an awkward kid his junior season, didn’t shoot or handle the ball particularly well and didn’t get a ton of playing time,” said Michael Casey, the head coach of Ossining High School in Westchester County, just north of New York City. “But his senior year, he was coming off a pretty good AAU circuit, and he emerged as a solid player.”

In Toppin, Casey saw a potential Division I basketball player, which is why he allowed Toppin to play multiple positions in a league where he could have sat in the post and used his height (6-foot-4 at the time) and athleticism to dominate opponents.

“He dunked in our first game his senior year, and I was surprised when he told me that was the first time he had dunked in a game,” said Casey, who was elevated from assistant coach to head coach in Toppin’s last season. “We let him do it all, including handling the rock in his last year because we figured that’s what he would be doing at his size at the next level.”

The plan to showcase Toppin’s skills worked: He averaged 20.6 points and 8.1 rebounds in the 2015-16 season as a senior, leading Ossining to its first conference title in 10 years.

But he was still flying under the radar.

College basketball recruiters flocked to Ossining, but not to see Toppin. Most of the visits were for members of the girls team, which was in the midst of winning four straight state championships. There was no interest in Toppin, aside from a few junior colleges.

“It was disappointing because we saw him on a daily basis, and knew what he could do,” Casey said. “But I was a new coach. People weren’t familiar with our program. And because Obi was a late bloomer, coaches questioned his size and capabilities.”

Toppin strongly considered taking the junior college route. But Harrison stepped in with the prep school scholarship, providing Toppin the opportunity to play with — and against — high-level talent daily.

The chance to play a national schedule during the 2016-17 season helped build Toppin’s confidence.

“The talent was already there, and as far as playing college basketball, he checked all the boxes,” Harrison said. “The only reason why he didn’t get a scholarship at Ossining was because he played in a small market, didn’t play a lot of AAU basketball and didn’t have the right person screaming his name. When you’re not playing in front of the right people, it’s hard to gain exposure.”

While Toppin’s game wasn’t flashy (several videos featuring his Mt. Zion games are posted on YouTube without even a mention of his name in the description), he averaged 17 points, 8.0 rebounds and 4.0 assists at Mt. Zion. He had also grown to 6 feet, 7 inches.

“We had scouts from Minnesota and Wyoming in the gym for a practice a few days after we got back from a tournament in Florida where Obi hurt his right hand,” Harrison said. “Obi probably hit 7 of 9 shots from the 3-point line with his left hand. And they came away from that practice saying, ‘Who is this kid?’ ”

Toppin, who never appeared on the ESPN 100 list of top high school players, suddenly had offers from a long list of colleges, including Oklahoma and Mississippi State. But while Power 5 programs pursued him, it was an Atlantic 10 school that won him over. 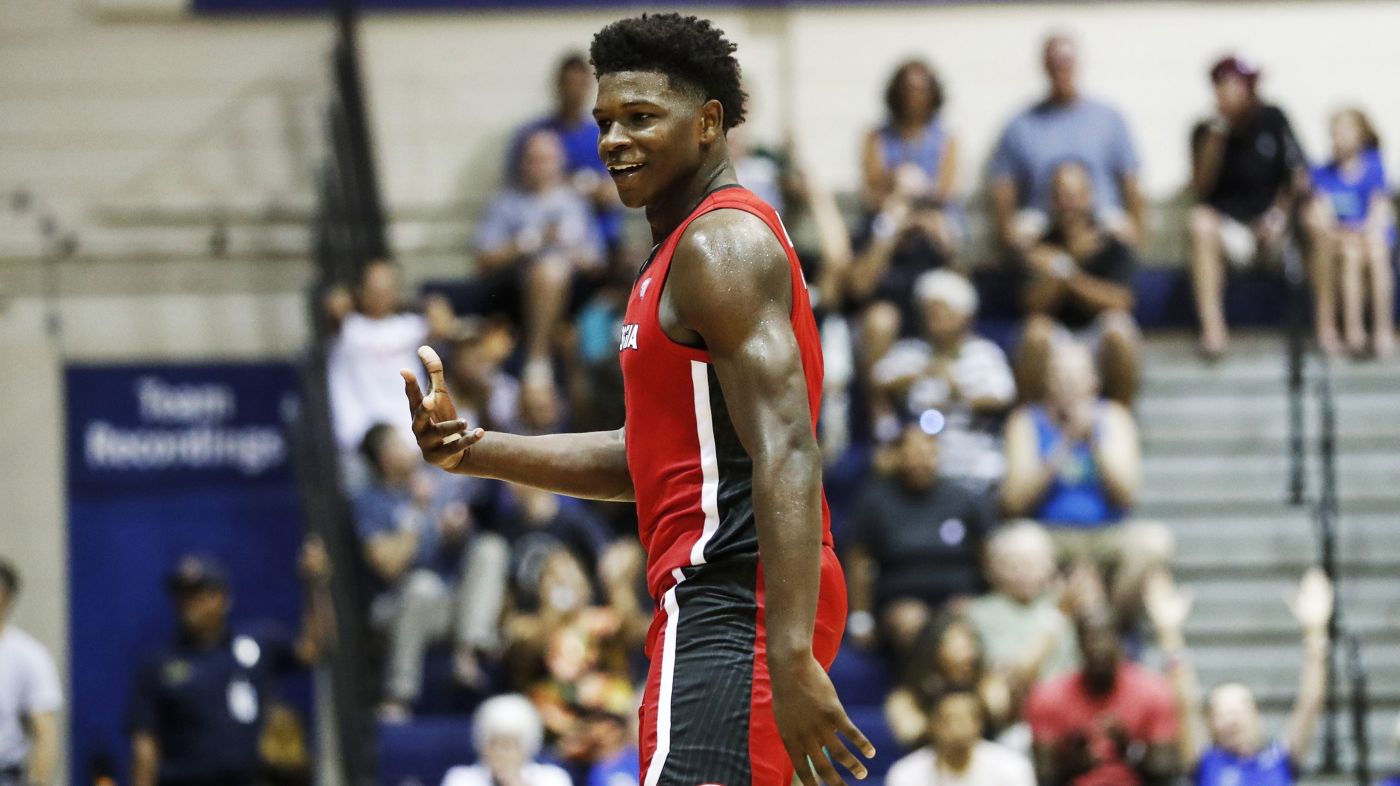 “Dayton was one of the first schools to approach him, and stayed committed,” Harrison said. “And it was a perfect fit: a kid coming from a small market, he understood that it’s easy to get swallowed up at a high-level school. At Dayton, he’s in a major basketball atmosphere which has a small-town feeling.”

But none of Toppin’s coaches — not Casey, not Harrison, not even Anthony Grant at Dayton — foresaw him going from an unknown in high school and redshirting during the 2017-18 season to being named the A-10 Freshman of the Year and becoming the player of the year as a sophomore.

“I think he surprised a lot of people,” Grant told The Undefeated. “He actually entered the draft after his freshman year and made a wise decision to come back and put himself in this position. We certainly felt like he could be, night in and night out, one of the best players on the floor in every game that we played.”

A major development, in Harrison’s eyes, was Toppin’s growth spurt through the years. He currently measures at 6-foot-9 and 220 pounds.

“He was catching pocket dunks for us, and his elbows were always above the rim,” Harrison said. “But since he left here he’s gained 20 pounds, so now he’s able to finish through contact and has the ability to shed defenders. We knew he was going to be good. We didn’t know he would morph into this great player.”

Dayton was ranked third in the nation entering the Atlantic 10 tournament, and poised to take a top seed into the NCAA tournament. The pandemic robbed basketball fans of seeing Toppin play during March Madness.

“We could have had a shot to show people what we were made of,” Toppin said. “We would have shown that we could hang with anybody.”

But basketball fans will soon get to see the results of the amazing five-year metamorphosis of Toppin in the NBA.

“How good will he be on the next level? I don’t know,” Harrison said. “But there are not many forwards in the NBA, besides the ones who are superstars, who have his ability and can do the things he can do. He’ll be just fine.”