Rajah Caruth’s devotion to world-class athletic pursuits started with multiple sports. He shot hoops, played soccer, and ran track growing up. He explored a common childhood interest in transportation with his father, visiting airports and rail yards to watch planes and trains come and go.

Caruth’s normal veered sharply and accelerated into a narrower lane of sports and interests several years ago. And he’s speeding through it.

The junior at Winston-Salem State University has quickly become a standout in auto racing, not just for his uncharacteristic success but also for his limited experience and unprecedented path from a Washington high school to racetracks around the country.

His next step toward establishing himself will be this weekend at Richmond Raceway in Virginia when he competes for the second time in NASCAR’s Camping World Truck Series (kind of like Double-A baseball). 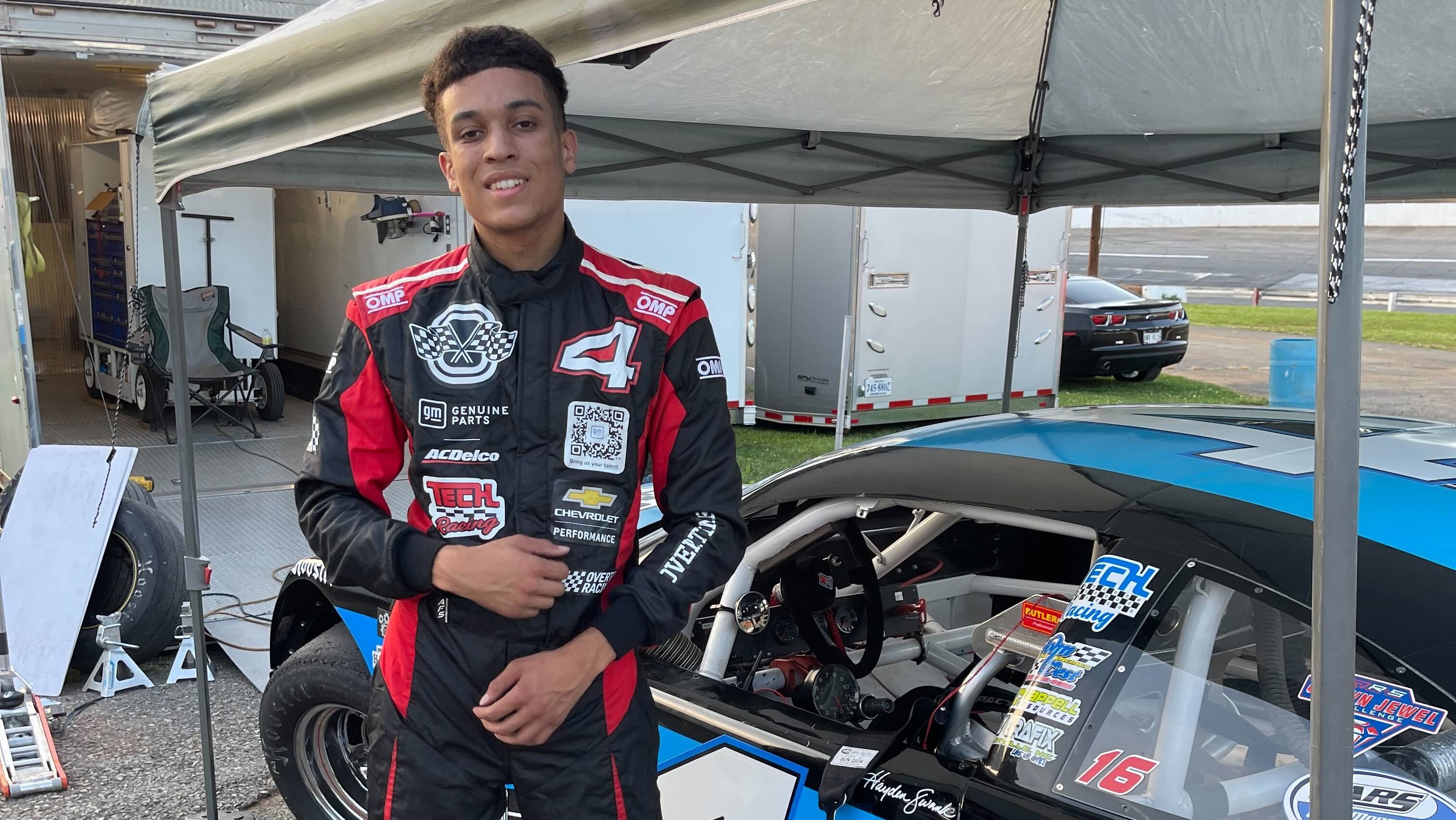 Caruth races full time with Rev Racing in the ARCA Menards Series (a feeder circuit for NASCAR’s three national series), leading that circuit virtually all season until Aug. 8, when he dropped to second in the standings. In April at Richmond – where he attended his first NASCAR race at age 12 – Caruth debuted in the Xfinity Series (considered the second-highest level of competition in NASCAR). He started 22nd and finished 24th, perfectly respectable and arguably excellent for a driver’s first spin in those cars.

His initial foray in the Truck Series in June was outright impressive, finishing 11th after starting 19th in the lineup. Following that race, Spire Motorsports signed Caruth to drive more this season. By year’s end, 20 ARCA races, four Truck races, and seven Xfinity races should be in his rearview mirror.

“There were times last year where I didn’t race for months, and it was really hard to figure out how to use my time wisely, how to compete against people,” Caruth told Andscape. “This year I’ve learned how up and down racing can be and how important the mental aspect is. It’s really hard to be honest, but I’m trying to get the hang of it and enjoy the journey.”

If it sounds like a lot, he’s making up for lost time and a childhood that didn’t revolve around racing.

Many observers might reflexively compare Caruth to 28-year-old Bubba Wallace, the only Black driver who races full time in NASCAR’s top-flight Cup Series. Yes, the two share similarities. But the mentor and mentee hail from opposite backgrounds.

“By the time I was 16, I had seven years of experience,” Wallace told The Athletic. “And when he was 16 years old, he was brand-new.”

While many tykes in youth sports imitate their favorite players on the field or the hardwood, others do likewise on asphalt tracks, sometimes dirt. Second graders can take corners at 70 mph in high-stakes motorsports, as witnessed on the Discovery series Baby Drivers. At that age Caruth had just discovered his passion for wheels after watching Cars.

“I’m always going to be catching up to people experiencewise and abilitywise just because I started so late,” he said. “But besides that, I don’t really pay any mind to it.”

“I guess I don’t have bad habits,” he said. “Especially since this is, like, my fourth year racing, period. I feel like I can hop in different things and figure it out pretty quickly.” 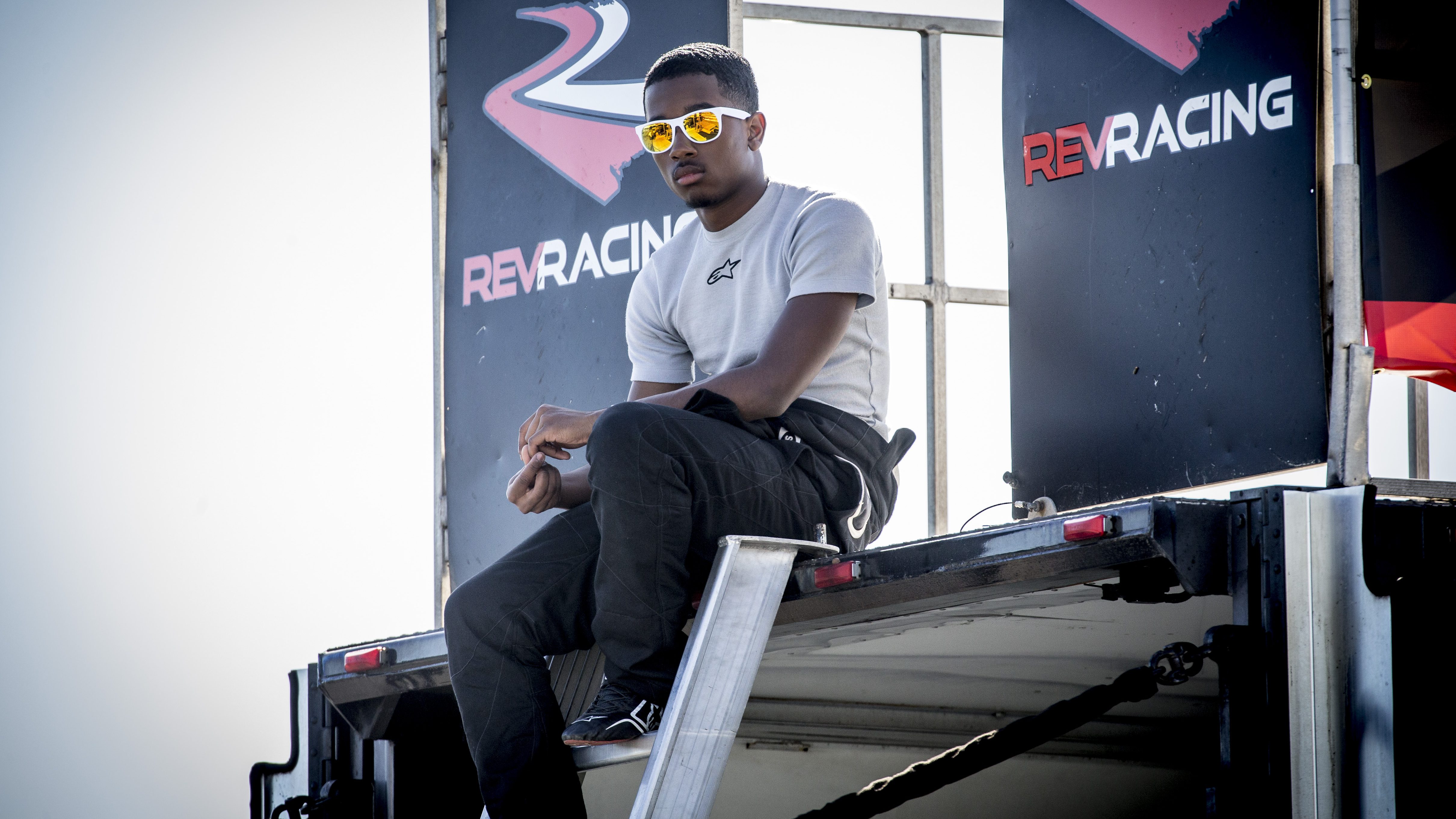 Most of Caruth’s time behind the wheel has been virtual. He began competing on iRacing in June 2018, shortly after his 16th birthday, and every free moment that summer was devoted to the simulation racing platform. It was a game for some but school for him, a means to study the craft the way he studied NASCAR history as a child, when he related class assignments to racing whenever possible.

The emerging technology intersected with NASCAR’s desire for diversity in its drivers and a rising star took form.

“His talent was there, but all those things coming together equated to a perfect storm,” said his father, Roger Caruth. “iRacing let NASCAR find talent in unconventional places.”

Caruth’s prowess at simulation racing in 2018 – making the playoffs and advancing to the championship round – helped him land one of four coveted spots in NASCAR’s Drive for Diversity program, the launchpad for Cup regulars such as Wallace, Kyle Larson and Daniel Suarez. Caruth is the first participant whose primary background was virtual racing instead of on-track experience. He didn’t compete in a real race car until 2019.

But on Saturday night in the Truck Series, he’ll turn laps with John Hunter Nemechek, 25. Next month in the Xfinity race at Kansas Speedway, Caruth can swap paint with Ty Gibbs, who’s nearly 20. Such environments are unremarkable for those young drivers. Nemechek’s father is Joe Nemechek, who broke Richard Petty’s record for all-time starts in NASCAR national series in 2019. Gibbs’ grandfather is the Super Bowl-winning football coach who formed five-time NASCAR champion Joe Gibbs Racing in 1992 … a decade before Ty was born.

Generational ties abound in racing, and family connections are great. But genes don’t guarantee greatness. Each driver must sit in searing heat and endure unrelenting G-forces, using catlike reflexes and precise hand-eye coordination to avoid danger, and race lap after lap with speeds approaching 200 mph at the grandest tracks. Having a name can help attract sponsors but success in racing – like other athletic endeavors – requires more than resources.

“Every professional athlete at the top level has that ‘it’ factor, whatever it is,” Caruth said. “But you also have to have the passion and the work ethic to do the things that aren’t as glorious to end up on racing on the racetrack, whether it’s sitting on the simulator, watching film, going into meetings, doing homework.

“It’s kind of how bad you want it. I think that’s what separates people.”

Sounds good, but desire only goes so far. No matter how bad everyone wants to shoot like Golden State Warriors guard Stephen Curry, Roger Caruth said it was more like “Mess Curry” when he coached his son. “Everybody wants to pull up at half court and shoot jumpers,” he said. “Rajah was very decent on defense because of his speed and he was a solid basketball player, but I couldn’t get him to give up those jumpers.”

The family and friends who cheered Caruth during basketball games and track meets have expanded their knowledge of auto racing, which requires its own demands on human performance. If those folks didn’t believe that drivers are athletes beforehand, Caruth has erased any confusion.

“It’s physical exertion to exhibit a skill,” he said. “When you’re driving a race car, you’re experiencing intense forces at a high rate of speed, and really using all of your senses to compute information and perform at a high level.”

Caruth is rapidly approaching the top tier and he really just started, turning faces along the way. He’s redefining what’s normal, not only for him but for fans and drivers who look like him, too.

“Rajah is the future for us,” Martins told nascar.com after signing him as a part-time Xfinity driver. “[Rajah and Roger] are exactly the type of people we want to be a part of Alpha Prime Racing. Rajah has his whole career in front him and I’m honored they trust us to be one of his first steps.”

“He’s going to be a star,” Bacarella said. “No question about it.”

No pressure, though. Caruth has the same high expectations.

Just another something to get used to.

Deron Snyder, an award-winning columnist from Brooklyn and an Alpha from HU-You Know, is ALWAYS ready to dance when the beat drops. But truth be told, he don’t need no music.