‘The sky’s the limit’: The promising WNBA future of Awak Kuier

When Awak Kuier was growing up in Finland, she would watch highlights of Candace Parker on YouTube. Kuier loved Parker’s versatility – her ability to handle the ball, run the floor, post up, shoot from 3, even dunk. As an aspiring hooper since she was 11 who couldn’t access WNBA games, Kuier modeled her game after Parker’s.

Turns out, Parker has been watching Kuier as well.

In March, Parker posted a collection of videos on Instagram that included a nod to the next generation of players. Swipe left and you’ll see a video of the now-19-year-old Kuier dunking a basketball – something she’s been able to do since she was 14.

The 6-foot-5 Kuier currently plays professionally in Italy and is part of a group ready to take the baton from veteran players such as Parker. Which is quite the feat for the daughter of South Sudanese immigrants who grew up in the small city of Kotka in southeastern Finland, where there was just a single girls team in the entire town.

Kuier’s hoops journey will continue Thursday when she will hear her name called during the WNBA draft (ESPN, 7 p.m. ET). A potential No. 1 overall pick, Kuier is set to become the first Finnish player to suit up in the WNBA’s 25-year history and only the sixth international prospect (without NCAA experience) to be taken in the top five picks of the draft. Those players include league greats such as Margo Dydek, Ann Wauters, Lauren Jackson and most recently three-time WNBA All-Star Liz Cambage.

While Kuier is one of the most talented players in the draft, she is also one of the biggest curiosities in the class. Many stateside are still unsure what she’ll bring to the WNBA, most of whom have never seen more than the viral videos of her dunking.

But those who have seen her in action are convinced of her immense potential.

“She’s going to be a beast,” said Dallas Wings forward Isabelle Harrison, who is Kuier’s teammate in Italy. “I can’t wait for the States to see somebody with this talent.”

Kuier was born in Cairo after her family left South Sudan to escape the country’s ongoing civil war. And when she was 2 years old, her parents, Sabit and Margeret, opted to immigrate to Finland to pursue a better education for Kuier and her four brothers.

The first years proved to be difficult for Kuier’s family, who didn’t speak Finnish and had trouble finding others who spoke Arabic. As a result, Kuier said, her parents struggled to find work. Meanwhile, her family didn’t have any issues being noticed by their new neighbors. Kotka is a small town, so when a new family arrives on its doorstep, it’s no small occurrence.

“When we first came there, they put us in the newspaper because there weren’t any South Sudanese [people] there before,” Kuier said.

Kuier’s parents learned Finnish quickly. As did Kuier, who learned the language in school while also picking up English from her older brothers before formally learning her third language starting in the third grade. Listening to songs and watching Disney movies also helped on that front.

“In Finland, we don’t dub things, so we just watch the movie in the original language,” said Kuier, who remembers The Lion King being a family favorite. “I was watching almost every movie in English.”

Through it all, Kuier’s parents raised their children in South Sudanese culture – from the Arabic being spoken in their household to the food and traditions they enjoyed. Kuier says more South Sudanese immigrants would also join their family in Finland. “We became like a community,” Kuier said. 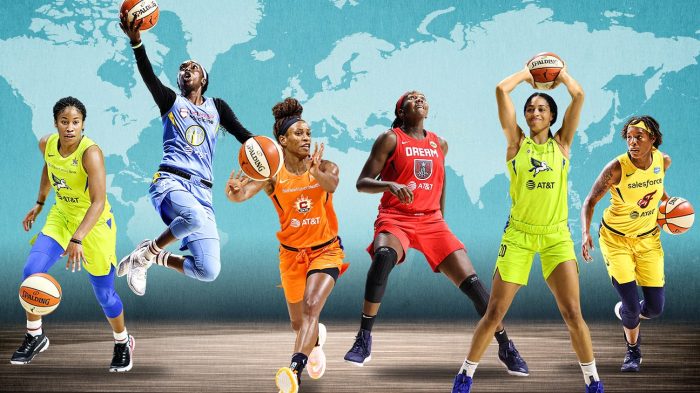 Kuier also learned about racism at an early age.

Though Kuier will soon be drafted into the top women’s basketball league in the world, there was a time in her childhood when she was passed over for a game of pickup. Not due to a lack of talent, but because of her race. She has memories of being outside at recess with her classmates as they prepared to play basketball in between classes. But as her classmates began selecting their teams, Kuier and any other Black kids present found themselves on the outside. Unchosen.

“They wouldn’t take the Black people because we ‘played too hard,’ ” Kuier said. “We used to always just play with the other Black kids. It was one of the things I remembered.”

But that didn’t deter her from finding joy in the game of basketball.

Her family moved to Helsinki, where Kuier would play for the Helsinki Basketball Academy (HBA) – an institution similar to IMG Academy in the United States with top-notch facilities — from 2017 to 2020. It was at HBA that Kuier would begin to develop as a player.

Before joining HBA, Kuier was largely used on teams as a traditional post player. But in the new system, Kuier learned multiple skills outside of the low post.

“She had some buzz because of her height [when she came in], but she was nowhere near the level that she’s at right now,” said Florida State point guard Sara Bejedi, a native of Helsinki who played with Kuier on the national team and at HBA for three years. “She wasn’t as strong or as confident, but as she came to my high school and with my coaches working with her, she learned the game really well.

“She was doing similar things as guards.”

As Kuier’s game continued to grow, so too did interest from colleges in the States. But playing college basketball was never Kuier’s goal. Going that route would have subjected her to collegiate WNBA eligibility draft rules, keeping her from declaring for the draft for at least two more years. Although she said her choice would have been between two in-state rivals from the Pac-12 Conference, Oregon and Oregon State, her attention was on the professional leagues in Europe.

Through 24 games this season, Kuier is averaging 8.9 points, 6.8 rebounds and 1.5 blocks. Harrison has been impressed with Kuier since her young teammate arrived at Ragusa.

“I just couldn’t believe she was 19,” said Harrison, who noted players on Ragusa refer to Kuier as “K.” “You forget how young she is with the talent that she has.

Kuier is able to play at the 3 through 5 positions. But it’s at the 3 and 4 where Kuier could present challenges for opposing defenders with her ability to put the ball on the floor and shooting range that extends to the 3-point line.

Ahead of the draft, there are still questions surrounding where and how she’ll fit on the floor. Much of that centers around which position Kuier will play in the WNBA.

“She’s tall, but still pretty thin,” said Harrison, adding that playing against physical opponents and herself in practice has helped Kuier. “We beat up on her to get her tough. She knows she has to put muscle on. I think it’s going to come with the process.”

“I like players that like to play tough on me,” Kuier said. “I know it’s going to help me in the future.”

As a former WNBA first-round pick herself, Harrison knows what comes with draft night and how quickly a player’s world can shift the moment her name is read by the commissioner. It’s for that reason that Harrison has shied away from overwhelming Kuier with information on the draft or the league and instead advises her to enjoy the moment she’s in now.

Besides, there’s the whole other matter of playing in the United States for the first time. Outside of participating in a Basketball Without Borders camp with Bejedi in New Orleans in 2017, this will be Kuier’s first prolonged experience in the U.S.

Bejedi, who is currently a sophomore at Florida State, has advice for her friend: Be excited about the culture shock.

“Us coming from Finland where there is no eye contact, there is no nothing, it’s just plain food,” Bejedi said. “Here it’s like living in your favorite movie. I know she’ll love it.”

Kuier and Bejedi bonded on and off the court in Finland, their friendship forged by their shared African backgrounds. On the senior national team level, Bejedi and Kuier were the top performers, and often the only Black players on the roster.

“It’s not easy being one of the only dark-skinned girls with a different cultural background,” said Bejedi, whose father is from Cameroon and mother is from Morocco. “Having each other was almost crucial.

“We live in a white country, we had to deal with a lot of things together. We had to overcome a lot, cope with certain cultures. Even though we were born in Finland, we still had our way of communicating and our culture that came with our families.”

While the U.S. will introduce Kuier to many cultural differences from her home country, she’ll also be subjected to the societal differences that come with being a Black woman in America. Bejedi cautioned Kuier about the racism in America, “particularly for darker-skinned people,” and the social issues that have been magnified across the country in the past year.

Harrison says she’s also had conversations about racism with Kuier.

“We do talk about racism and she’s very aware of that at her age because she experiences it in her country,” Harrison said.

Kuier understands that being a part of the WNBA is about more than the awareness she can manifest on the court. She has taken it upon herself to both learn and stay informed about what’s happening socially in America by following media sites and accounts.

On March 13, the one-year anniversary of the police killing of Breonna Taylor in Kentucky, Kuier reshared a post from the account of Black Lives Matter. On March 18, she reshared an infographic raising awareness of the shootings in Atlanta that killed six Asian women. One of the players Kuier says she follows closely is Wings forward Satou Sabally, who, besides being a budding star in the league, was also the youngest player on the WNBA’s social justice council last season.

“It’s something that I’m passionate about,” Kuier said. “If I have some kind of platform, I always want to use it to do good.”

On draft night, due to the restrictions from the coronavirus pandemic and still being in-season in Italy, Kuier will be surrounded by her Ragusa teammates and supported (albeit virtually) by her family. But she will also have Finland on her mind.

In Finland, Kuier is one of the faces of a Finnish basketball scene whose recent individual international basketball success has fallen solely on the shoulders of the Chicago Bulls’ Lauri Markkanen. In the local media, Kuier is billed as the queen of Finnish basketball, and the country’s “super promise.” Though a teen herself, she’s already considered a role model to many young players in the country — who you can be sure will be checking out her WNBA highlights on YouTube.

Kuier knows that when she hears her name called on draft night or suits up for her first WNBA game, that she’ll not only be representing herself but an entire country. It’s a responsibility she carries proudly.

“Representing Finland is very important to me,” Kuier said. “Everything I’ve learned till now, I’ve learned in Finland. I feel like, in a way, I am a Finnish basketball player.”

As one of Kuier’s friends put it in an Instagram story hyping the soon-to-be WNBA talent:

“They’re going to know where Kotka is real soon.”