The ESPN report on Phoenix Suns owner Robert Sarver’s nearly two-decade control of the team, which includes accusations of Sarver creating and fostering an environment of racism, sexism and general harassment within the organization, is your trove of inappropriate and discriminatory behavior that’s become expected in sports organizations.

Sarver, who purchased the franchise in 2004, is accused of, among (many) other things, using the N-word more than a Quentin Tarantino script, incessantly professing his ownership of team employees, and making references to his sexual prowess, down to condom size. If true, the accusations paint Sarver as a tyrannical and juvenile team owner who terrorized and harassed his employees simply for the joy of it.

Whether Sarver, like former LA Clippers owner Donald Sterling before him, suffers any professional consequences for his actions is the next question. The league announced Thursday evening it is launching an investigation into Sarver and the Suns. But while the NBA and its investigators sort through 17 years worth of alleged misdeeds, the focus immediately turned to the opinions of the various Black people employed by the Suns, including players Chris Paul and Devin Booker, head coach Monty Williams and general manager James Jones. 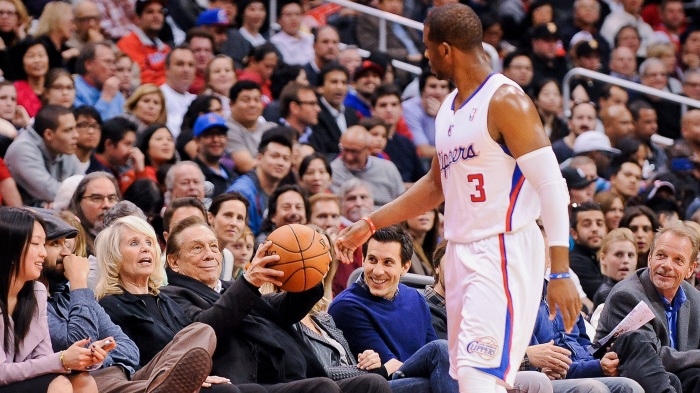 Inside the Clippers’ final days with Donald Sterling as ownerRead now

After Thursday night’s game against the Houston Rockets, Paul, who went through a similar situation with Sterling in 2014, stressed patience as the league investigates.

“I’ve been through a few situations in my time in the league,” Paul said. “The powers that be, they look into it. They do their investigations or whatnot, but I think the biggest thing that I’ve learned through all these years is that us as a team, we’ve got to talk. It’s not about what everybody else is saying or everybody else is telling you to do or should do. It’s about how we feel as a team, as a unit, coaching staff, everybody with the organization.”

It’s important to gauge the feelings of those directly impacted by, in particular, Sarver’s racism, but only Asking a Black Dude ignores the root of the problem and the existence of the solution. There is a constant expectation in this country for Black people to, on the one hand, never be perceived as too dangerous or distracting, but on the other hand provide publicly measured cover for those who aren’t held to those same requirements. It’s to be the Black Friend without the ability to be either individually.

And cover doesn’t particularly mean a defense of the accused, but a refusal to cause a scene when voicing their displeasure. It’s a survival mechanism, particularly for those in professional sports: showing loyalty in an effort to feel accepted (or remain employed) by the very people causing you harm.

In the days of slavery, slave owners used Black people as overseers, or “drivers,” under the premise that the enslaved people might respond more positively to someone who looked just like them. (Sarver unintentionally made this point when he allegedly told a staffer he needed to hire a Black coach because “These [N-words] need a [N-word].”) In more modern times, Black people are hired in supposed positions of power to protect against accusations of racism or prejudice. The rush to hire more diversity, equity, and inclusion experts in the wake of the police murder of George Floyd in 2020 without fostering inclusive and humble environments for those very experts, is a glaring example.

(This expectation applies to the current pandemic: Green Bay Packers running back Aaron Jones, whose father died of complications from COVID-19 in April, defended teammate Aaron Rodgers, who tested positive for the coronavirus this week: “I don’t think it’s a selfish decision. He’s our leader … he’s 100% committed to this team, just like anybody else is in this locker room,” Jones said. Rodgers has not addressed the media as of publication.)

When it comes to Sarver, the Black Suns employees are expected to speak passionately and intelligently about how the words and actions of their employer impact them as Black men, dredging up compartmentalized memories of every microaggression and act of racism they or their families have ever had to experience. It’s an unfair burden, one the Black employees neither asked for nor deserve to have placed on them. Paul didn’t go around the facility yelling racial slurs. Williams didn’t scream at his staff about paint pick-and-rolls or swimsuits.

What’s more mind-boggling is that Black Suns employees are being forced to carry this weight over what can subjectively be considered a comically laughable rendition of what racism and misogyny look like. The report states Sarver invoked numerous Black pathologies, including Black fatherhood (in the case of Brooklyn Nets center LaMarcus Aldridge) and Black men’s apparent Kryptonian weakness for strippers. He heavily disliked player agent Rich Paul. He denigrated his wife to the boys at work. He dug up the age-old debate over who is allowed to use the N-word; you can envision a Chappelle’s Show skit with Sarver as the white antagonist explaining why he actually can say “n—a.”

(There’s a Charlie Murphy’s True Hollywood Stories moment in the ESPN report when Sarver, through his attorneys, denies ever using the N-word, and in the very next paragraph attempts to explain away the one time he used the N-word.)

As much as the report about Sarver feels like a Black or women’s issue, it’s very much a white men’s issue. The actions of Sarver are unique to Sarver and those who look like him; there is, after all, only one Black NBA owner.

Victories made among the countless civil rights movements in American history were in direct reaction to white people — white men in particular — being pushed into action. Black people were upset about slavery, Jim Crow and mass incarceration, but only when white people decided their brethren were doing a bit too much did things actually change.

So while it will feel impactful to hear unfiltered feelings of Paul, Booker, Williams and Jones, who, in an act of self-preservation, defended Sarver, likely due to some misguided sense of loyalty that he will someday come to regret, actual structural changes will come from the actions of the people who look like Sarver.

(There are legitimate reasons to question the actions of Jones, the Suns general manager, who laid on the sword for Sarver, telling ESPN the accusations against the team owner doesn’t “[describe] the Robert Sarver I know, respect and like,” and siding with Sarver over former Suns head coach Earl Watson, who is Black and Mexican. For Jones, the Suns gave him an opportunity to run an NBA team, and he likely feels some misguided sense of loyalty toward Sarver for taking a chance on him. Jones will someday learn how far self-preservation will get him, but there are complicated reasons for why he made the statements he did.)

If Sarver refuses to answer for his actions, and based on his use of his lawyers in the ESPN report he likely will, then we should hear from other white people. How were Frank Kaminsky and Dario Šarić impacted by what Sarver has been accused of doing? Was NBA commissioner Adam Silver disgusted by Sarver’s language? Do the other white male owners condemn or condone Sarver’s actions?

Because if the latter sets of people aren’t as mad as the Black people in the Suns organization, then how can the ideals of the NBA Foundation, a $300 million fund intended for social justice organizations, and the National Basketball Social Justice Coalition, a committee that leads the league and National Basketball Players Association’s civic engagement work, be considered anything more than public relations window dressing? How can “Black Lives Matter” being painted on a court not ring hollow?

For now, it doesn’t appear that the powerful white people in the league will act. As of publication, not a single team owner has denounced Sarver’s actions. The league released a 55-word statement that mentions neither Sarver nor the Suns by name but said that the NBA and WNBA (Sarver also owns the Phoenix Mercury) “remain committed to providing a respectful and inclusive workplace for all employees.” Various current and former white Suns executives, including current Golden State Warriors head coach Steve Kerr, told ESPN some form of, “This isn’t the Robert I know.”

Until white people within the NBA are as angry, devastated, hurt and betrayed as they likely assume the Black people reading about Sarver are, there can be no true racial progress, both within the NBA and outside of it.