​Cooking amazing meals is commonplace for the renowned executive chef for Fox Restaurant Concepts in Arizona, which serves more than 50 restaurants nationwide. In this special case, however, Woods was challenged to replicate the aforementioned Caribbean dish from the family recipes of Andrea Ayton, Ayton’s mother. And when Ayton smiled after a few bites, Woods knew for sure that he had cooked a meal to the Phoenix Suns center’s liking, a meal that will now raise money for a local charity.

​“I was confident that he would like it,” Woods told Andscape. “I knew I got the rice flavor down after testing the recipe 10 or so times. I took so many notes and pictures when Andrea taught me how to make it. I am confident she would love it. After DA’s reactions, he told me the rice tasted identical to his mother’s. He was shocked and blown away.”

​Andrea Ayton has used Jamaican-Bahamian food as a way of not only feeding her family, friends and the less fortunate, but also showing love and family heritage. Earlier this year, Ayton and his mom came up with the idea of raising money for an Arizona charity through her tasty food. Ayton’s representation groups Innovate and WME Sports contacted The Henry, a popular restaurant near the Suns’ practice facility often frequented by the players.

​The Henry was ecstatic to team up with the Aytons for the charity opportunity to add the dish to its menu starting Wednesday at The Henry and Culinary Dropout locations in Arizona. With each meal purchased, 10% of sales will be donated to Helping Hands for Single Moms, which assists the families of low-income single mothers. The meal will be on the menu until January before being changed by the Aytons, and the partnership lasts through April, said Bailey Williams, Ayton’s client service representative.

Ayton said it was an “honor” for his mother to not only bring the family dish to Suns fans and Arizona, but to help a charity that she has been passionate about.

​“It’s crazy to know that my mom has a whole dish in a restaurant that is so highly valued,” Ayton said. “It is different. My mom never had me in the kitchen, so to be in the kitchen with the chef teaching me how she cooked her dish was different. This is all my mom. She was a giving person when we were back in Nassau and didn’t have nothing. If I’m outside with my friends from around the block playing, she is not just calling me in for dinner, she is calling everyone in for dinner. She’s feeding everyone’s kids and giving them food to bring back home.”

​Said Fox Restaurant Concepts marketing director Hayden Wolven: “It’s definitely a winning dish. We think it’s going to be a top seller. We hope that is the case so we can raise as much money as we can for Helping Hands for Single Moms.”

Coffman hopes that the Aytons’ aid will educate more people about Helping Hands for Single Moms, which may spark more interest in donation and partnership.

“And suddenly, they’re attracted to our organization and what we do and go on our website. This will be a great benefit for us financially. But when I think about what it will mean for us to be associated with Fox Restaurants and what can come from this event, I can tell you as a CEO for 20 years for Helping Hands for Single Moms, this is an incredible opportunity for them.”

​Ayton and his mother have worked with Helping Hands for Single Moms for several years now, Coffman said. The Aytons have hosted lunches and dinners and provided grocery gift cards and Puma sneakers for women involved with the organization. In December 2021, Andrea Ayton was given the My Mom, My Hero award from Helping Hands Single Mom for her charity work. Andrea Ayton was too shy to speak, so Ayton spoke on his mother’s behalf. 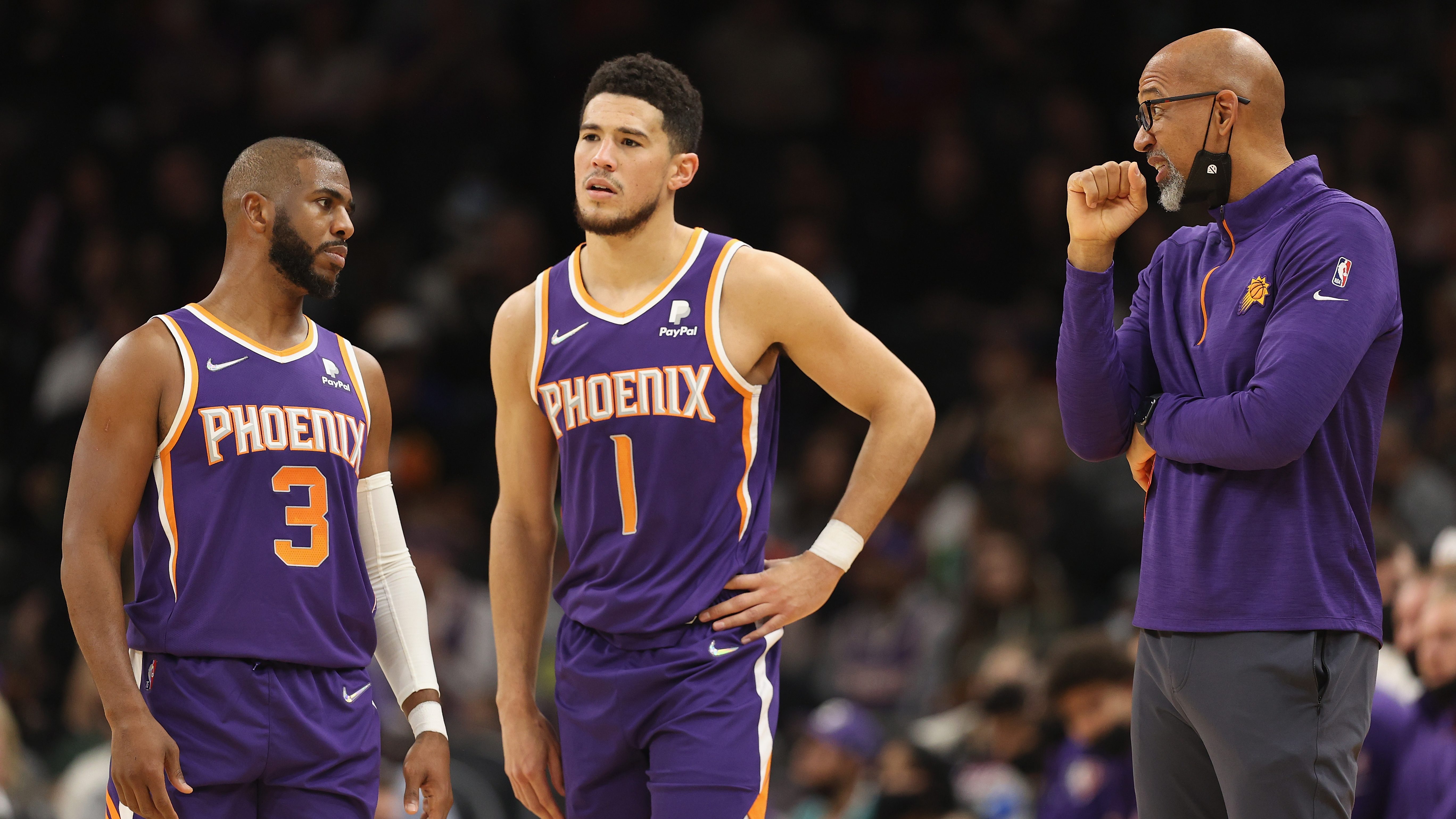 Suns trying to ‘block out the noise,’ get past team owner Robert Sarver’s racism and sexismRead now

​“Our hearts go out to single moms,” Andrea Ayton said. “My mom was a single mom. I believe it is just so good to give back to them, especially, and the kids. I met some of the moms. They’re nice people. I met the man that is in charge of it. He’s doing a good job. That is why we choose them.

​“That time I got the award I was shy because there were so many people. One-on-one, I’m not. But with crowd, no. I just said, ‘Thank you,’ and didn’t give a speech. Deandre spoke for me. But it was just so overwhelming and beautiful.”

​A proud Ayton added: “Now she has a platform where she can really show what she can do. She’s proud of it. That is her passion. Her thing. Caring. She doesn’t really have a job. But her job is caring.”

​To help The Henry’s chefs make the dish, Andrea Ayton went to the restaurant’s test kitchen on Aug. 25 to teach Woods.

​Woods had all the poultry, sea bass and other ingredients that she needed to make the dish. When she began cooking, she had no measuring cups, teaspoon, or other measuring instruments. She calculated by feel what she deemed was the right amount of spices.

​“I was a bit nervous. But they were nice, so I got a little comfortable. I just do my thing,” Andrea Ayton said. “I don’t measure. In my house, we cook a lot of food. When I went to the test kitchen, they had a lot of things out to cook. I ended up cooking so much that day, especially peas and rice.

​“There was fish, so I took a couple of pieces. With the rice and peas, there was more than [the] amount I needed. The coleslaw was OK. I wanted some plantain on the side, but they didn’t continue that. It [came] out really good.”

Woods wrote down everything in a notebook. He realized that Andrea Ayton’s hands are about the same size as his, which helped him calculate the amount of spice needed. She also gave Woods a family history lesson while preparing the food and said Woods did a “very good job” of recreating her food.

​“Andrea highlighted each ingredient, telling me the history of the produce, spices and seafood,” Woods said. “She passionately began to cook each component of the dish, often slowing down to explain what was happening. My favorite part was her grabbing my hand and stirring the pot of rice to show me how it should be cooked. This took me back to cooking as a kid with my grandmother. She told me the No. 1 ingredient was love.

“When teaching our chefs, we explain the history of the dish and how to make it with love and passion every time. Each executive chef is trained hands-on how to make the dish, then they teach their sous chefs and cook teams. We also created a step-by-step video so all the cooks can reference the cooking process when needed.”

​Andrea Ayton has Jamaican roots and is a native of the Bahamas. She came to the United States with her son as he followed his basketball dream. After playing high school ball in San Diego for two years, Ayton moved to Arizona in 2015 and has played for Phoenix Hillcrest Academy, the University of Arizona, and the Suns.

Ayton was the No. 1 pick in the 2018 NBA draft. His father, Alvin; mother Andrea; three siblings, Tiann, Horace and Serenity; aunt, Jackie Dixon; girlfriend, Anissa Evans; and young son, Deandre Ayton, Jr., and other loved ones now all live in the Phoenix area. With his family’s support, Ayton has gone on to become one of the NBA’s best young big men. As a restricted free agent last summer, Ayton signed a four-year, $133 million maximum offer sheet with the Indiana Pacers, but the Suns matched the offer.

While Ayton’s contract situation was stressful for Ayton and his family, his mother said that their prayers were answered in the end. She also added that the blessings they receive will ultimately become blessings for the less fortunate through their philanthropic efforts.

​“I’m grateful,” Andrea Ayton said. ​“There is a saying, ‘We prayed and God delivers.’ We are praying people. I know God would come through for Deandre and that is what he did. We have a lot of giving to do. A lot of things to do. We are here to bless who needs help.”

Forget that Thanksgiving is arriving soon. Every Sunday is like a Caribbean Thanksgiving and more with the Ayton family.

It’s enough deliciousness to feed 20-plus people and take a plate wrapped in aluminum foil home. The family rotates the dinners at the homes of Ayton, his mother, sister, and aunt. She has also cooked for the Suns and the University of Arizona players.

​“It feels like I have never left home,” Ayton said of the Sunday dinners. “It’s a house full of family and friends. My mom is cooking for everybody. We are listening to music. Everyone is there for the whole night. We’re just enjoying being around each other, the culture, and that vibration like it is back on the islands. It never changed. Everything stays the same. Every Sunday whether I’m there or not.

​“She is inviting everybody. Don’t let it be an early game or 3 o’clock game. Everyone who is at the game will come to the house. My agents, financial adviser, people I collab with. Everybody there is in the house. This is where people understand why I am the way I am when they see how I act around family and friends. We don’t take nothing too serious.” 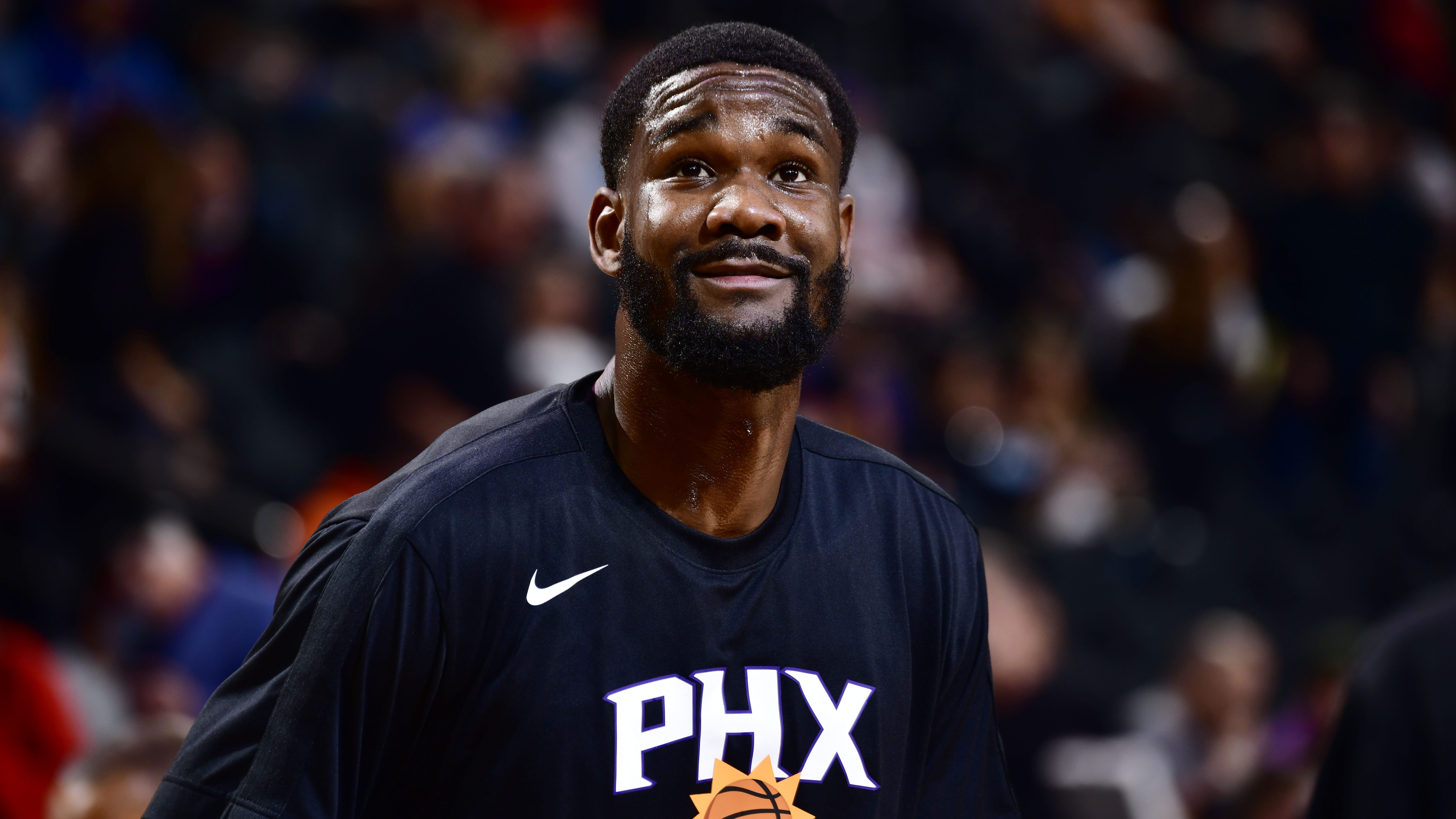 ​“A lot of reggae music and people doing old-school dances,” Ayton said. “Some dance moves are traditional. People get drunk off the food. It’s the energy. We’re in America, but we’re vibing like we’re on the islands. It’s a different energy. It’s like home. That’s different.”

​When Ayton is able to attend, it is tradition for his mother to make his plate first with all his favorites. He likes fried and baked chicken, mac and cheese, mixed greens, turkey legs, brown fried rice and rice and peas on his plate with his “special food.” His young son has started a new tradition by eating off his father’s plate.

​So why does Ayton eat first?

​“He is the one who works. That is why I need to make sure that he eats,” Andrea Ayton said. “I don’t want to anyone to pick the best pieces [beforehand]. So, I pick the best food for him first. That’s fair.”

Said Ayton: “It’s like a mountain for me. It’s her son’s plate. And she makes it with pride for everybody to see. And my baby eats off my plate. He wants everything off my plate.”