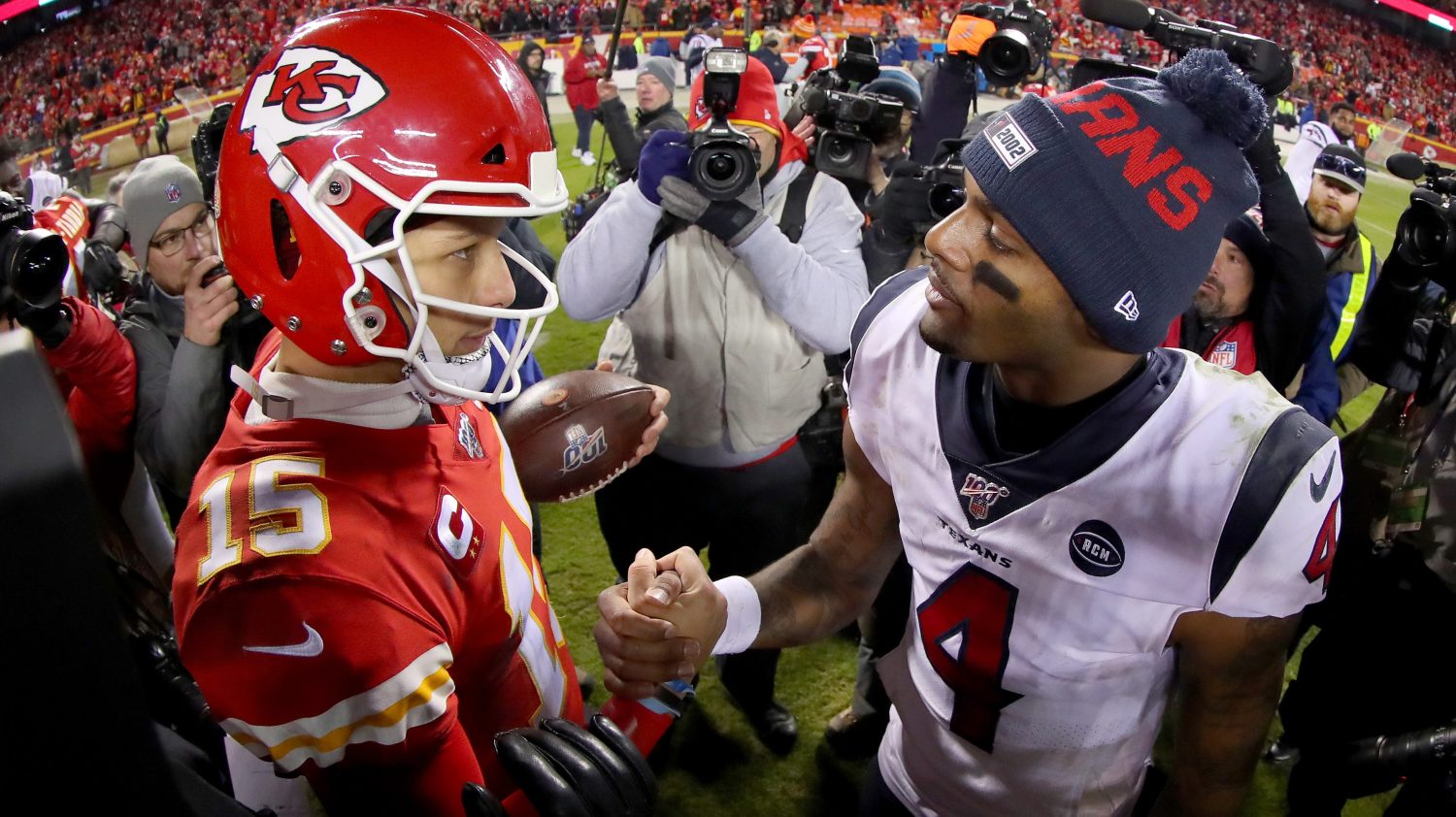 Patrick Mahomes (left) of the Kansas City Chiefs and Deshaun Watson (right) of the Houston Texans following the AFC divisional playoff game at Arrowhead Stadium on Jan. 12 in Kansas City, Missouri. They will play each other again on Thursday. Tom Pennington/Getty Images
NFL

The era of the Black quarterback is officially underway

The symbolism is powerful, marking the end of the NFL’s first 100 years and the beginning of its next. When the Super Bowl champion Kansas City Chiefs play host to the Houston Texans in the league’s curtain-raiser Thursday night, superstar quarterbacks Patrick Mahomes and Deshaun Watson will share the spotlight. As the late, iconic musical artist and civil rights activist Nina Simone would say, oh, to be young, gifted and Black.

Nothing in the NFL occurs because of happenstance, and by pairing Kansas City and Houston in the season’s kickoff matchup, the league’s top decision-makers have acknowledged the obvious: The era of the Black quarterback is officially underway. Mahomes and Watson are the best and brightest of a new wave of spectacularly talented and unapologetically Black passers who laid the groundwork last season for what will come, achieving more collectively in one season than their predecessors — a historically marginalized group that faced impediments of systemic racism as well as would-be tacklers in a league that turned 100 on Aug. 20 — had accomplished in any of the preceding 99 years.

Last season, Mahomes, at 24, became the youngest player to have both a Super Bowl title and a league MVP award. This season, Watson is among the leading contenders, if not the top one, for Mahomes’ belt. He’s a wizard whether working from the pocket or on the move.

Together, the two friends, who were both drafted in 2017 and turn 25 this month, also sit atop the NFL’s salary chart.

During the offseason, the Chiefs and Texans rewarded Mahomes and Watson, respectively, with record extensions. Among all NFL players, Mahomes is alone in the top spot. Watson occupies second place.

Eventually, accomplished Dallas Cowboys passer Dak Prescott figures to receive a massive multiyear extension as well, either from his current employer or another. Baltimore Ravens signal-caller Lamar Jackson, the reigning Associated Press NFL MVP, is building a strong case to have big paydays in his future. Likewise for Arizona Cardinals quarterback Kyler Murray, last season’s AP Offensive Rookie of the Year. Don’t be surprised if they all take significant steps forward this season.

Deshaun Watson is ready to be heard Read now

Russell Wilson, the dean of the group, is still as good as it gets for the Seattle Seahawks, and it wasn’t that long ago his contract was second to none. And former Carolina Panthers star Cam Newton, the second Black passer to win the AP MVP award, begins anew with the New England Patriots under head coach Bill Belichick.

On Thursday, though, Mahomes and Watson will have the stage to themselves.

They delivered quite the show in last season’s AFC divisional playoffs, with Watson and the Texans sprinting to a 24-0 lead on Kansas City’s home field before Mahomes led a stirring rally that resulted in a 51-31 Chiefs rout.

Like many across the nation that day, Doug Williams watched the duel play out on television. The first Black quarterback to both start in a Super Bowl and win the game’s MVP award, Williams is proud of Mahomes and Watson — and eager to see what mountains they’ll climb next.

“You’re not talking about two wily veterans, you’re talking about two of the youngest quarterbacks in the game, and the fact they’re doing what they’re doing is really something,” Williams, an executive with the Washington Football Team, said on the phone recently. “The league has them in this game because they’re two of the best, and that’s important for a whole lot of people to see.”

Athletes have played a central role in the ongoing national discussion about systemic racism ignited by the killing of George Floyd at the hands of police back in May, as well as several other recent fatal encounters between Black people and law enforcement, or those believing they were empowered to act in such a capacity. Mahomes and Watson have left no doubt about where they stand.

In June, the Pro Bowlers were among a group of more than a dozen Black NFL stars who pushed owners to acknowledge past wrongs and truly stand with them, releasing a powerful video in which they asked the league to admit it erred in its response to peaceful NFL player protests of police brutality and systemic oppression, condemn racism and affirm that Black Lives Matter. In an equally remarkable response, commissioner Roger Goodell checked the boxes on the players’ to-do list, even saying, “Black Lives Matter,” displaying a major departure from the league’s previous stance on, well, everything as it pertains to the new protest movement.

The importance of Mahomes and Watson appearing in the video, in terms of prompting Goodell and owners to quickly reevaluate their positions, cannot be overstated, several current and former league executives said at the time. In the NFL, elite quarterbacks set the agenda. Because of their standing as the face of organizations, and the enormous space their salaries eventually occupy on salary caps, they’re essentially the owners’ de facto partners in safeguarding the game’s continued prosperity.

With so many rising Black star quarterbacks in the league, it simply wasn’t feasible for owners to take a position in opposition to some of their most important new partners. Owners never faced such concerns when Joe Montana and Dan Marino were the faces of the game. Of course, that’s the whole point, University of Southern California professor Todd Boyd said. It’s a new day.

“I don’t think of either Deshaun Watson or Patrick Mahomes as [1960s civil rights organizers] Stokely Carmichael or H. Rap Brown; they’re not like militants pushing revolution,” said Boyd, who teaches race and popular culture. “They’re making, I think, very reasonable requests on the part of the league. And it’s useful and beneficial to the league to recognize that and honor it. As I always say, white people get to be white. If you choose to advocate for something, you can. And if you choose not to, you can do that also. For them, it’s not going to make that much difference, one way or the other.

“As a Black person, though, I don’t know that you really have that choice. If you ignore what’s going on, you look irresponsible. … So, subsequently, it’s going to impact Black quarterbacks differently than white quarterbacks. And if these are going to be the kind of players we now see of the face of the league, you would expect that maybe they’re going to do things differently than their predecessors. … Maybe this type of advocacy will become an essential part of the NFL in ways it hasn’t been before because of who is in those positions [of power].”

In part because Mahomes and Watson drew a line in the sand in the most important video in NFL history, the league increased its efforts to show it finally gets it.

Owners publicly committed to increasing their social justice footprint, pledging to donate $250 million over a 10-year period. “Lift Every Voice and Sing,” traditionally known as the Black national anthem, will be played during Week 1. The messages “It Takes All of Us” and “End Racism” will be stenciled on all end zone borders for home openers. The end zone messages demonstrate “how football and the NFL brings people together to work as one and use our example and our actions to help conquer racism,” according to a memo from the league office to clubs obtained by ESPN. What’s more, the memo reads, players will have the option to wear helmet decals honoring victims of systemic racism.

One could argue that much of the NFL’s opening rollout amounts to nothing more than meaningless gestures that won’t have an appreciable impact in the fight for racial equality. On the other hand, Mahomes and Watson have helped move the league to places unimaginable after then-San Francisco 49ers quarterback Colin Kaepernick first sat and then kneeled back in 2016 to shine a light on systemic oppression and police brutality. That’s something.

At the nascent stages of building their careers, Mahomes and Watson already have accomplished much. And by the time they’re done, there’s no telling the transformative results that Mahomes, Watson and their contemporaries could produce, renowned quarterbacks coach Quincy Avery said.

“There weren’t any [Black quarterbacks] on [the NFL’s list of top players in the game’s first 100 seasons], but there will be predominantly Black quarterbacks on that list when it’s done 100 years from now,” said Avery, who tutors Watson. “The thing about it is, they definitely now allow elite Black QBs to be the face of franchises.

“And they’re out there.”

Mahomes and Watson head that list. And no one needs to tell that to the people who run the NFL.