The HBO series about a crew of Black women discovering themselves through relationships, careers and their friendship tore apart Twitter every Sunday for five seasons and dared to imagine a world in which Black women get to have everything they want in the end. The end of a show like that is certain to leave a void.

But there have been plenty of others depicting nuanced friendships between Black women — namely Amazon Prime’s Harlem, ABC’s Queens, Run The World and P-Valley on Starz, BET+’s First Wives Club and BET’s Twenties, just to name a few. The emergence of such shows has prompted many men — as we are wont to do whenever women get recognition for anything — to wonder where we fit in all of this. Where are the shows that check all the boxes for Black men the way Insecure did for Black women?

The most-circulated comment on this subject came from Black News Channel host Mike Hill, who tweeted, “We’ve had Living Single, Girlfriends and Insecure … shows about positive black women & their relationships with each other. Has there ever been a good, successful tv show about black men like this? (One that lasted at least 4 seasons?).” He went on to ask, “[Is] it that Hollywood won’t green light these types of shows or will we actually support it?”

Many noted that Hill’s timing — wondering about Black men 24 hours after a show celebrating Black women ended — was a typical example of a man centering men. Others noted that there have always been plenty of shows about Black men and their friendships: from sitcoms Malcolm & Eddie to Martin, and some people even comically referenced the short-lived ’90s disaster, Homeboys in Outer Space. In terms of movies, the late ’90s and early 2000s featured a boom of successful Black male friends flicks such as The Wood and The Best Man.

While everyone was right to mention the existence of these programs, there hasn’t been a show that took over the timelines and water-cooler conversations in the way Insecure did while covering the topics the show navigated. 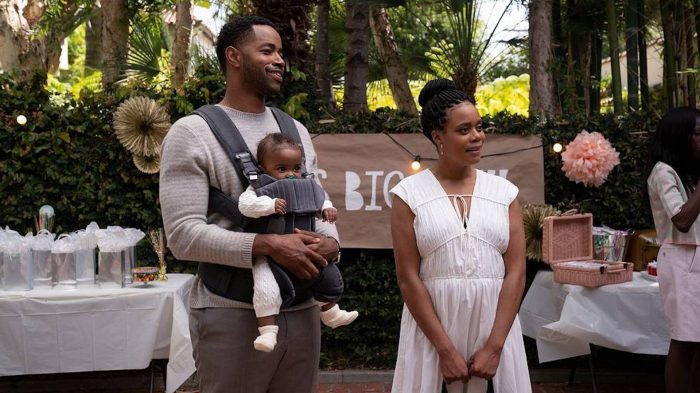 ‘Insecure,’ Lawrence and the limits of the ‘Good Black Man’Read now

Atlanta has come close, depicting three Black men and their complicated friendship, though it is missing a lot of the romantic relationship drama that was essential to Insecure. Season Two of HBO’s Love Life explored one man’s journey through romantic relationships, and he has one solid friend, but it’s light on the examination of their relationship. And neither emerged as the social media lightning rod that Issa’s relationship with Lawrence became.

The fact is, a direct male counterpart to Insecure or its offspring doesn’t exist. But a better question is why is one even necessary? Why can’t Insecure be Insecure and why does there need to be a male version of everything a woman does? It’s probably best to focus on trying to tell Black men’s stories on their own merits without trying to force them into being the counterpart to a successful show about Black women.

After all, Insecure itself provided one of the most riveting depictions of Black male relationships, as Lawrence’s friend group dealt with fatherhood, marital strife and breakups. Nathan’s story arc was about him adjusting to his life while understanding his mental health. The showrunners of Insecure treated each character with nuance and care.

There are Black male creatives who seem to have a green light to make any TV show they want. 50 Cent has his own TV universe at Starz that is mostly focused on drug kingpins and street life (though the relationship between Lil Meech and Da’Vinchi in BMF was one of the more heartfelt on TV last year). Kenya Barris has created a handful of shows for ABC and one for Netflix, and while black-ish is told from a man’s perspective, his main social circle is his co-workers. Tyler Perry has Bruh on BET+, but it’s a typically absurd Perry show. Overall, it just seems like if there was a desire from Black men in the industry to make an honest depiction of intimate and friendly relationships among Black men, then we would have seen these shows already and not just as a reaction to the popularity of Insecure. But much of their attention has been spent on the hypermasculinity of a show like Power.

Which brings me to Grand Crew.

NBC’s new sitcom from the creators of Brooklyn Nine-Nine had a sneak preview in December and aired its pilot on Tuesday. It’s about a friend group of four Black men and one Black woman in Los Angeles at varying stages of their professional and personal lives — married, single, college-educated, college dropout, steady job, struggling to make ends meet and so on. Nicole Byer is the biggest name on the show and her charisma jumps off the screen. Aaron Jennings, Justin Cunningham and Carl Tart have immediate chemistry, and Echo Kellum leans all the way in on the corniness of his character, Noah Koles.

The first two episodes are mostly focused on Noah’s obsession with finding a Hollywood love story and the rest of the crew’s struggles with healthily expressing their emotions. The show checks all the boxes for a men’s version of Insecure and it does so with humor and honesty.

Noah’s wide-eyed quest for the perfect love story is vulnerable and hokey enough for laughs, while earnest enough to captivate. And the way the movie Paddington 2 rips apart the other men’s hearts (as it did mine!) takes us to an unexpected discussion about the guardrails Black men put up to protect ourselves. Along the way, we get revelations about fathers, friendships and childhood connections. The show is a promising evolution of the Black male buddy shows of yore that doesn’t aspire to placate the viewer looking for a show celebrating toxic masculinity and the “alpha male.”

My hope is that the show not only adds to the already substantial canon of Black male buddy shows, but walks it into a new age of men representing ourselves and seeing ourselves handled with care. Maybe more such shows will follow. But that requires a desire to both make these kinds of shows and do them in a way that does the most good. That shouldn’t be too much to ask.