PORTLAND, Ore. — This 18-year-old speaks Mandarin, wants to own fast-food restaurants and reads Kobe Bryant’s books. He wants to bring joy to his hometown of Memphis, Tennessee, and happens to be the No. 1-ranked high school basketball player in the ESPN 100 Class of 2019.

Say hello to James Wiseman, the 7-foot-1 center with the apt last name who will play for Memphis next season.

“When I committed to the University of Memphis, there was an old lady that started crying,” Wiseman told The Undefeated. “I didn’t know it was that serious. She told me that she was truly blessed to see me play next season and that I brought a lot of hope back to Memphis.”

Wiseman, who will play for the USA Team in the Nike Hoop Summit on Friday night, averaged 25.8 points and 14.8 rebounds at Memphis East High School. The 2018-19 Gatorade National Boys Basketball Player of the Year initially expected to sign with Kentucky. But he ultimately chose Memphis, which is coached by former Memphis and NBA star Anfernee “Penny” Hardaway, who was also Wiseman’s former AAU coach.

“He is a good player with a very high ceiling,” Hardaway said. “The best things about him is that he understands his game and is always working to get better. And he is an even better kid off the floor.”

Several NBA scouts said Wiseman could be the No. 1 pick in the 2020 NBA draft. Wiseman sat down with The Undefeated for a Q&A at the Nike Hoop Summit.

You were expected to sign with Kentucky. Can you talk about why playing for Penny Hardaway changed your mind?

[It’s] about a strong connection with me and Coach P. We talk a lot on a daily basis. He knows my weaknesses. He knows what I need to work on. So for me, to just be under his wing is gonna be great for my game.

It was great to play for him in AAU. He taught me about the game of basketball to get ready for a superior level, which was the NBA. He taught me how to always keep my body up to par and really just learn as much as possible.

What do you remember about Penny’s career?

When I was in sixth grade I used to study a lot of players: David Robinson, Karl Malone, Larry Johnson, Shaquille O’Neal. So when I started studying Shaq, I was like, ‘Who is Penny Hardaway?’ So I started looking him up. I saw some highlights. It was crazy. He was one of my favorite players as well.

I had his screen saver when I was in sixth grade, before I even knew him. I studied a lot of him. When I first met him, when he was my [AAU] coach during my junior year of high school, that was crazy.

Even though he’s my coach, he is still one of my favorite players.

Some people say Chris Bosh, Kevin Garnett and even David Robinson. But really, I’m my own person. I want to create my own path. I want to be the next James Wiseman so people look up to me one day. But I’ve patterned my game compared to those three players, so I just say it. And I really have been just getting a lot of film from ‘The Greek Freak,’ Giannis [Antetokounmpo], so I’ve been studying his game too. I really have been just trying to soak up as much information as I can.

If you could’ve entered the 2019 NBA draft, would you have done it?

No. Because I still want to get better … so when I get to that stage I’ll be able to take on the challenge. I’m just trying to learn as much as possible, and I’m just upping my game by just learning and studying film constantly on players that I’m interested in that impress me the most.

When you decided to stay home with the University of Memphis, what type of impact did it have locally?

I’ve really given hope back to the city of Memphis. I know they’ve been down for a while in terms of basketball. … There are a lot of African American children and adults who just come up to me, approach me and say thank you for staying. Really, there has been a diversity of races saying thanks for staying here and they can’t wait to see me play here. 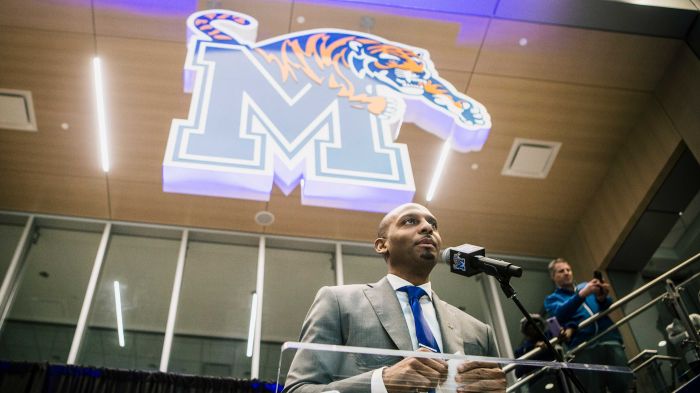 What are your thoughts on the pain and crime in the streets of Memphis?

Yeah, it’s a lot of empathy in that concept. I let that motivate me in terms of basketball. Make sure that I could get everybody, the whole community, back together just through my play. I really just try to be an inspiration and just motivate little kids and other people out there that they can do whatever they want to do if they put their mind to it. …

One day I want to be a philanthropist, and I got a vision. I want to change my community around. I’m originally from Memphis, Tennessee, so I’ve got plans for the future. I mean, basketball is something that I do, but I’m more than an athlete. I really want to do as much stuff after basketball as I possibly can. … I want to major in business management or sports management and own a business. So that is my goal.

What kind of business?

Fast-food restaurants like Chick-fil-A. There is a lot of money going into those types of businesses, so I really want to invest in stuff that I enjoy. I like going to Baskin-Robbins a lot, so I’ll say I’ll invest in that. I really can’t explain it, but I got a lot of ideas.

When did it click for you that you have a platform as a budding star?

It first came to me when a kid asked for an autograph and to take a picture. That changed my whole mindset about life, about how I’m inspiring the younger generation throughout my play and really just inspiring them to believe in themselves. So after that it just changed my mindset completely about life itself, it really being more than basketball.

One day the basketball is going to stop bouncing. So, for me, I just got to take a different path and not be unprepared when that time comes. I just want to be prepared at all times.

I heard that you know Mandarin. How did you learn that?

Is there an NBA player that you’ve looked up to off the court?

I’d say Kobe Bryant. Kobe Bryant changed the youth a lot, especially the younger generations with inspiring them throughout his books. I’m reading the Wizenard series right now. … I just got done reading Mamba Mentality. I’m just reading his books and getting details from them.

There is also LeBron James, with how he’s become a philanthropist and how he changed his hometown of Akron and the whole state of Ohio. Also, Kevin Garnett and people who impacted the young generation in a lot of ways.

What do you know about the history of University of Memphis basketball?

A lot of the alumni have talked to me. Keith Lee, Larry Finch, Penny Hardaway and Elliot Perry. They talked to me about keeping the tradition going, learning as much as possible and having fun on the college level, because you’re not going to have it for a long time, because time goes by fast.