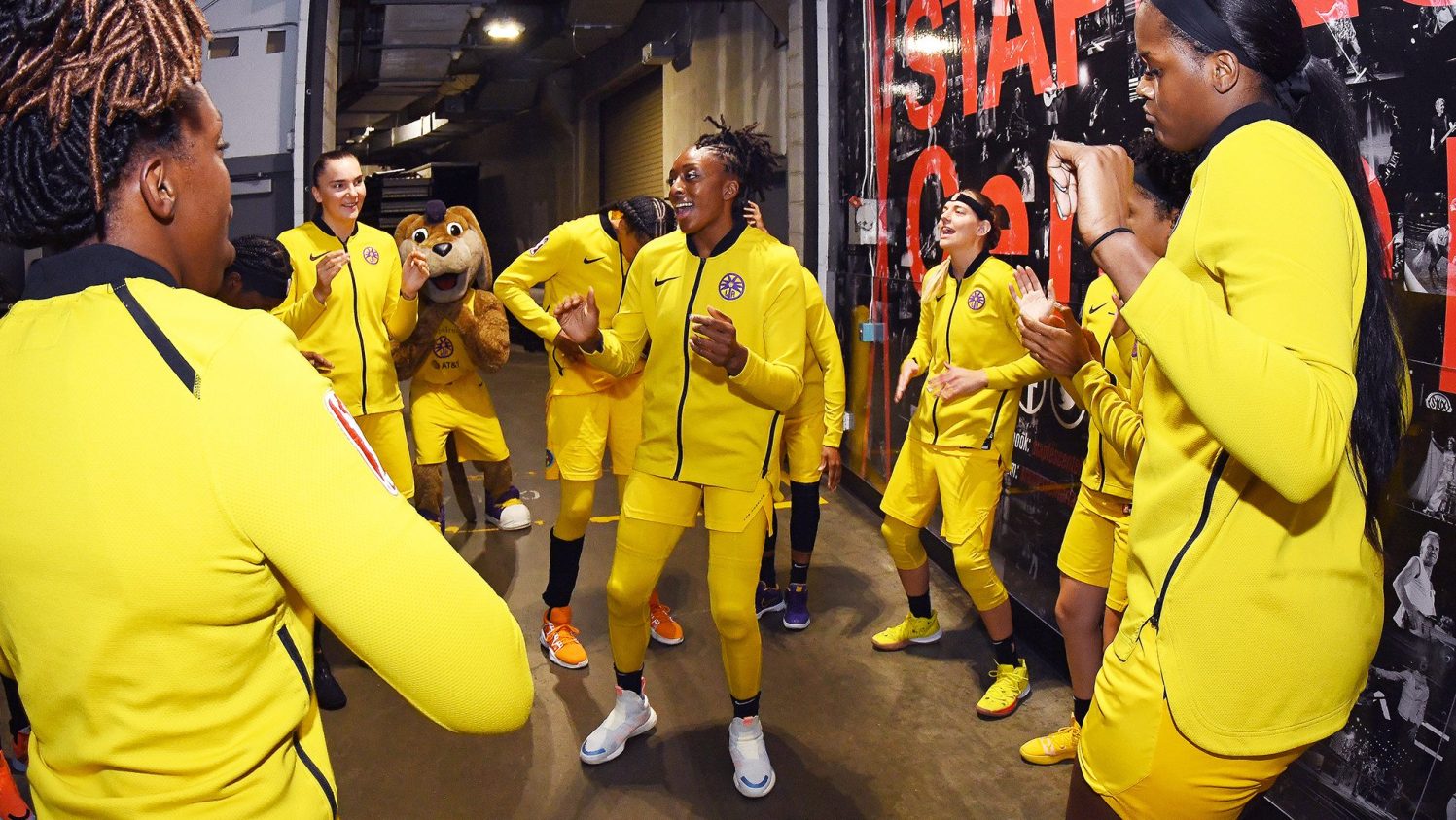 Nneka Ogwumike of the Los Angeles Sparks huddles with her teammates before a game against the Minnesota Lynx on Sept. 8 at Staples Center. Adam Pantozzi/NBAE/ Getty Images
WNBA

The leader of the Women’s National Basketball Players Association, and the Los Angeles Sparks, Ogwumike readies for sport-altering negotiation

UPDATE: The WNBA and the players’ union have come to tentative terms on a new collective bargaining agreement including salary bump, other cash compensation increases, improved travel and marketing opportunities, and fully paid salary on maternity leave.

Nneka Ogwumike has a theory.

For someone with her resume — No. 1 overall pick in the 2012 WNBA draft, WNBA champion, MVP, Rookie of the Year, six-time All-Star, All-WNBA first team, four-time All-Defensive first team, World Cup champion, EuroLeague champion, even a Polish League champion — she often finds herself left out of the conversation regarding the game’s best players.

It doesn’t help that her game isn’t flashy — it’s all about efficiency. Of the 144 players in the WNBA, Ogwumike ranks second behind Elena Delle Donne in career player efficiency rating (25.83). And she ranks fifth all-time in WNBA history. But the Los Angeles Sparks forward offers another explanation for her lack of mentions: It’s hard to talk about someone if you can’t pronounce her name.

Nnemkadi “Nneka” Ogwumike (pronounced NEH-kuh Oh-gwoo-MIH-kay) doesn’t roll off American tongues with the same ease as, say, Sue Bird, Maya Moore or Tina Charles. Perhaps it’s why the names of big-time talents such as Giannis Antetokounmpo and Hakeem Olajuwon are often interchanged with monikers such as “The Greek Freak” and “Hakeem the Dream.”

“My name is not easy to say,” Ogwumike, 29, said. “A lot of people recognize that it’s not an easy name or it’s maybe a name from a different place. I think I have an easily stereotypical name. That’s fine, I really don’t care.”

She wasn’t the kid who dribbled a basketball in the halls. She didn’t grow up watching the game, although she went to Houston Comets games growing up when her mom, who is an educator, received tickets through the school. And she didn’t attend a collegiate program rife with NCAA championships. She reps Stanford’s “Nerd Nation” with pride.

The idea of being overlooked is not a new concept for Ogwumike. It’s something she said she got a taste of in high school but truly recognized while playing at Stanford.

“There were times when I would perform better than other players that were playing college basketball and nothing would be said,” she recalled. “It didn’t matter to me, but I heard it enough to realize I’m just one of those players where I just have to work hard no matter what.”

While she may not receive the level of recognition her resume warrants, her hard work is certainly paying off in the WNBA: She will lead the Sparks into the WNBA playoffs as the No. 3 seed on Sunday. Then, as president of the Women’s National Basketball Players Association (WNBPA), Ogwumike and her executive committee will represent all 144 players as they, along with WNBPA director of operations Terri Jackson, negotiate a new collective bargaining agreement (CBA) with the league after the season.

The agreement is undoubtedly one of the WNBA’s most important steppingstones in its 23-year history, the next chapter in the fight for pay equity in women’s sports. And Ogwumike is the person the players have chosen to be the face of the fight.

That’s the formula Ogwumike has used to topple obstacles, according to her sister and Sparks teammate Chiney Ogwumike. It’s the blueprint she has leaned on during her playing career dating to her days at Stanford.

When Ogwumike arrived on “The Farm” as a freshman, she entered the Cardinal program as one of the top recruits in the country. But when she stepped on the floor at Maples Pavilion, adjusting to the style of collegiate play didn’t come naturally. Ogwumike relied on her athleticism in high school against inferior competition. Against college-level players, though, athleticism alone wouldn’t be enough.

“At the beginning, working with her in practice, I’d be like, ‘Nneka, what’s your go-to move?’ ” said Stanford assistant coach Kate Paye, who recruited Ogwumike to Palo Alto. “And she’d say, ‘I don’t know, they would throw it up to me and I just put it in the basket.’ ”

Whether it was adjusting to a new system, new teammates or the rigor of a Stanford education, Ogwumike struggled.

As her freshman season continued, Ogwumike began asking questions — a lot of questions. Her raised index finger became a frequent sight on the Stanford practice floor, so much so that Ogwumike earned the nickname “Question Queen.” Ogwumike wasn’t satisfied with understanding only what she was doing on the floor, she wanted to know why she was doing it.

“Nneka was not the first Stanford player to ask a lot of questions, but she might have asked the most. It was pretty funny,” said Stanford head coach Tara VanDerveer, who coached Ogwumike from 2008 to 2012. “They were always good questions.”

Ogwumike would finish her Stanford career as a three-time All-American and the second all-time leading scorer in program history. In 2012, the Sparks drafted her with the No. 1 overall pick.

“Nneka has always been a learner,” Chiney Ogwumike said. “When she is involved with the game, she wants to know everything about it. That’s how it’s always been since she fell in love with the game. That’s just the type of thinker that she is.”

It’s no wonder, then, that the players of the WNBA turned to the “league nerd” to lead them into the future.

In recent years, the WNBA has watched as other female pro sports have commanded the pay equity conversation. The U.S. women’s national hockey team and, more recently, the women’s national soccer team have both challenged their respective governing bodies as they fight for pay equality.

WNBA players have been unafraid to shine a light on the conditions they face while playing in the league, setting the tone for these upcoming negotiations. Ogwumike, however, didn’t exactly plan to be in this spot as the face of the league at its most integral inflection point to date.

“To be very honest, I wasn’t really going for [president],” Ogwumike said.

In 2016, as a vice president of the executive committee, Ogwumike said she was still learning about unions and their impact. She credits WNBA legend Tamika Catchings, who led the negotiation of the 2016 CBA as president of the WNBPA, for persuading her to run for the position.

“Tamika pulled me aside and said that I should,” said Ogwumike, who was the only remaining active player on the executive committee at the time. “It was befitting of me to step into that role.”

She began to do research, gather different perspectives, learn about negotiations from other sports leagues as well as further her knowledge of the WNBA’s business model, all the while looking to Jackson, whom Ogwumike described as the Players Association’s “eyes and ears, everything.”

“That’s the Stanford student in her. She does her homework,” Chiney Ogwumike said. “Even at practice now, everyone calls her ‘Madam President’ because she is that efficient in what she does.”

Ogwumike has advocated for increased participation in the months leading up to negotiations. As the executive committee begins preparing proposals and counterproposals, she is encouraging all players to read the current CBA to better inform themselves about the changes they want to see.

“[Nneka] definitely offers a lot of information: perspectives, talking points, viewpoints,” said Chelsea Gray, Ogwumike’s teammate and a player rep on the WNBPA. “It’s kind of like a one band, one sound type of deal. She really plays into that and really speaks to us.”

“We’re really trying to get player engagement as much as we can, because obviously it involves us,” Ogwumike said. “It affects us. Everyone wants to see great change that will lead to the progression of the league.”

The primary issue taken up with players is increased pay. In the WNBA, the maximum base salary is $117,500.

“Obviously, we want to get paid our value, and that starts with looking to increase the salary now,” Ogwumike said.

“It’s a structural issue,” she added. “I think that’s something that can easily be resolved by both attending to the mechanisms of the league and then also the suggestions and the contributions of the players. No matter how great the product is, if you don’t have an appropriate business model, the product is never going to thrive as much as you want it to.”

Across the table from Ogwumike in negotiation will sit recently appointed WNBA commissioner Cathy Engelbert. Engelbert, who assumed the league’s top post in July, is the former CEO of Deloitte and was a college basketball player at Lehigh. Ogwumike and the executive committee met with Engelbert at All-Star Weekend, a meeting Ogwumike described as positive.

Ogwumike and the executive committee have outlined three priorities as they approach the beginning of their negotiation. Besides salary compensation, there is also player experience (i.e., travel and accommodations), and health and safety. Within those priorities lie a handful of line items ranging from domestic violence policies to player marketing.

There is always the possibility that both sides won’t come to an agreement before the start of the next season. Players such as seven-time All-Star Tina Charles said they’d consider sitting out should the sides fail to reach an agreement. Last July, Phoenix Mercury guard Diana Taurasi said players wouldn’t be able to achieve pay equity without a strike.

While Ogwumike acknowledged the possibility of a player strike as being a “reality to some degree,” it is not something she, or the executive committee, is hoping for or expecting.

“We want to play,” Ogwumike said.

The reality for Ogwumike is, despite the improvements she hopes to help shepherd into the league, she and many other league vets may not be able to experience the full fruits of their advocacy in the long term. Despite that, the gravity of what’s at stake for future generations of both women’s basketball and women’s sports at large is not lost on her.

If there’s any doubt about Ogwumike’s ability to tackle a challenge, her track record speaks for itself.

“I think she’s going to lead us into the best position possible as WNBA players.”