Growing up, my uncle was a huge Star Trek fan, so I would watch Nichols, who played Lt. Nyota Uhura, often. But my fondest memory of Nichols came in 2016 when I was a student serving as the 70th Miss Bowie State University. That day, I was fighting the urge to go back to my dorm — which is named after Bowie State alumna ​​Christa McAuliffe, who would have been the first teacher in space if she hadn’t been killed in the devastating Challenger explosion in 1986. As class let out, I got a text from my adviser that read, “Come to the Communications building. There’s someone you should meet and speak with.”

When you’re a Campus Queen, you receive texts like this quite often. School officials tap you to meet a range of people, from university donors to former Campus Kings and Queens. But this time was different. Instinctively, I replied to the text, “Who?” The response was 1,000 times better than a nap: Nichelle Nichols. 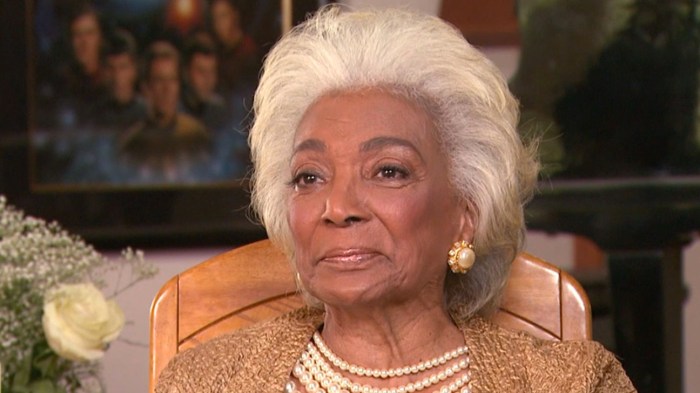 Nichols was a national treasure. Born Grace Dell Nichols in Robbins, Illinois, in 1932, the actress, singer, and dancer was best known for her groundbreaking role as the communications officer on the USS Enterprise in Star Trek. On Sunday, Nichols died of natural causes, according to a statement released by her son, Kyle Johnson. She was 89.

Nichols lived many lives before joining the cast of Star Trek in 1966. During her teenage years, she sang in Chicago nightclubs, and later famed composer and orchestra leader Duke Ellington invited her to go on tour. For many, that would be an accomplishment of a lifetime, but she was just getting started. Nichols, who was one of the first Black women to play a prominent role on television, even had a hand in naming her iconic Star Trek character. When she auditioned for the role, she was reading Uhuru, a historical novel about the Mau Mau uprising in Kenya written by Robert Ruark. The show’s creator, Gene Roddenberry, saw the book, read it, and decided to name Nichols’ character after the title of the novel.

Nichols’ ability to break barriers didn’t stop with Lt. Uhura. By the time I’d met Nichols in 2016, she had been advocating for a more inclusive space program for decades. She challenged NASA to diversify its astronaut classes, and worked with the agency to help inspire more women and people of color to join its ranks.

Thanks to her advocacy and others in the field, Bowie State became the first university to receive a satellite collaboration with NASA, which allowed students to work remotely with a NASA team in Florida on space center missions. BSU also became the first and only historically Black university to establish a satellite operation and control center on its campus. When I met her, Nichols was visiting the campus to tour the facility and advocate for Black students to have the opportunity to pursue careers in the space field.

As I was escorted to meet her, Nichols smiled brightly as she sat in her wheelchair in front of the communications building. I couldn’t help but get emotional at the sight. Meeting my soror, who was an honorary member of the Alpha Kappa Alpha sorority and who I grew up watching on TV, felt surreal. Even at 83, and as health conditions including dementia were beginning to plague her, Nichols continued on her mission to inspire students. Although our conversation was brief — and mostly consisted of me gushing about what she meant to me — Nichols showed me that we all have a responsibility to help create a future that goes beyond the one we can currently imagine.

When I learned Nichols had died Sunday, I was overwhelmed with emotion — losing an icon always feels tough, no matter how old they are. But I have found comfort in knowing that I am not alone in recognizing Nichols’ impact and accomplishments, as many took to Twitter to share the impact that her legacy has left on their lives.

Nichols was a trailblazer and her impact will live far beyond her time on this earth. May her legacy continue to “live long and prosper.”