(Editor’s note: For the second year in-a-row, Shaun Livingston has been pivotal in getting the Warriors back to the NBA Finals. On the brink of back-to-back championships, Livingston came out in Game 1 of the Finals and led his team with 20 points off the bench. He is a man of great resilience and character. Below, we repost a story from last month documenting his remarkable story arc.)

Golden State Warriors fan Ramini Singh recalls running to see what was happening on television after she heard her brother scream while watching an NBA game between the Los Angeles Clippers and Charlotte Bobcats in 2007. He had just witnessed what is often regarded as the ugliest injury in NBA history.

The slender 6-foot-7 point guard— the No. 4 pick in the 2004 draft — came down awkwardly after a missed layup attempt and snapped his twig of a leg in half. The arena gasped as Livingston yelled in agony and writhed on the floor. Suddenly, a promising career was in jeopardy before it got going.

Next up was a missed season of rehabilitation, stints with nine NBA teams and one D-League squad and being waived four times before triumphing as a key member for the 2015 NBA champion Warriors. His is now an oft-held story of inspiration.

While rehabilitating from a severely broken leg in a boating accident on April 16, Singh has used Livingston’s story as motivation and thanked him on Twitter.

“…I just wanted to tell you that I broke my leg and ankle in 4 places, had a titanium rod, plates and screws put in my leg/ankle and can’t walk, but you are my inspiration and seeing you play is the ONLY thing that gives me faith that one day that I’ll be okay. #Hope,” Singh said as @NiNisLove on May 13.

Livingston has been touched by countless tweets in which fans have expressed gratitude after using the champ’s story as motivation following physical tragedy. In Singh’s case, Livingston read her words on Twitter and responded on May 14 from his @ShaunLivingston account.

“Have faith in yourself and your body. I wish you the best getting back. #Believe… Thanks 4 sharing your story. The biggest hurdle we can climb is the mountain of doubt in our head telling us we can’t accomplish,” Livingston tweeted.

Livingston reflected alone on his overcoming what seemed like an insurmountable hurdle last year on the Warriors’ team plane heading back to the Bay Area from Cleveland after winning the title.

Champagne was like mist in the air while his teammates took turns holding the championship trophy at their seats on the charter plane. Elated and exhausted, most eventually fell asleep on the special flight. As for Livingston, he sat quietly and relived the nightmare he turned into championship triumph.

“I didn’t cry, but there were emotions,” Livingston told The Undefeated. “My adrenaline was too high. I was too pumped. I couldn’t sleep. I was just up thinking about how far I had come. While watching guys sleep with the trophy, everything was going through my mind like the path that I went through — playing with different teams, being in different cities.”

Livingston hails from Peoria, Ill., a town most famous for being the home of the late comedian Richard Pryor. After starring at Peoria Central High, the 2004 Mr. Basketball of Illinois was drafted with the fourth overall pick of that year’s draft by the Clippers at a mere 18 years old. He missed 101 of 246 games to injury his first three seasons. After three years of growing pains, the Clippers were hoping for a breakthrough season for Livingston until the nightmare of his life arrived on Feb. 26, 2007.

“My leg was deformed. My knee joint was dislocated and out of place. It was painful. Ten seconds felt like an hour,” Livingston recalls. “It was only like 10-15 seconds. But until they put my knee back into place, it was excruciating for sure.”

The replay was so horrific that ESPNEWS warned viewers before showing it. Tests were done to make sure there was not any gangrene or need for amputation.

He had to learn to walk again.

The bright side was that he was just 21 years old.

“The knee was all deformed, bloodied up and leaking with puss,” Livingston said. “I just couldn’t move it. Stiff. It was like I had a spare leg. All of my quad was skinny. It was like a pole with a pineapple in the middle of it.”

Livingston missed the entire 2007-08 NBA season. He finally returned to basketball activities on June 16, 2008 about 16 months after the injury. The Clippers didn’t make Livingston a qualifying offer when his contract expired after the 2007-08 season and he became an unrestricted free agent.

A two-year contract with the Miami Heat lasted just three months (and a total of 41 minutes on the court) for the 2008-09 season before he was traded to the Memphis Grizzlies. Memphis waived him after the trade on Jan. 7, 2009. It was the first of several times he’d be cut on his road back to relevancy. There was a three-week stint in the NBA D-League with Oklahoma City’s Tulsa 66ers (now Oklahoma City Blue).

The Thunder then signed him on March 31, 2009, but cut him three days before Christmas.

“It was humbling. It caused you to question your skills,” Livingston said.

He had to learn to walk again. The bright side was that he was just 21 years old.

Livingston considered playing overseas next. Instead, he parlayed two 10-day contracts with the Washington Wizards into a contract for the remainder of the 2009-10 season. Livingston started 18 of the 26 games with the Wiz, averaging about nine points and four assists in 26 minutes per game. He was legit again. That earned him a two-year, $7 million dollar contract from Michael Jordan and the Bobcats — the very same team against whom he was injured.

His stay didn’t last long, however. He was waived after being traded twice during the summer of 2012. He re-joined the Wizards on Nov. 15, 2012 and was cut two days before Christmas. The Cleveland Cavaliers claimed him off waivers days later.

“You can look at it as failed opportunity and failures because I didn’t make it with those teams or I didn’t get a contract or they moved me or brought in someone over me,” Livingston said. “It was always something. I was just using that as fuel and encouragement while always having the right perspective.” 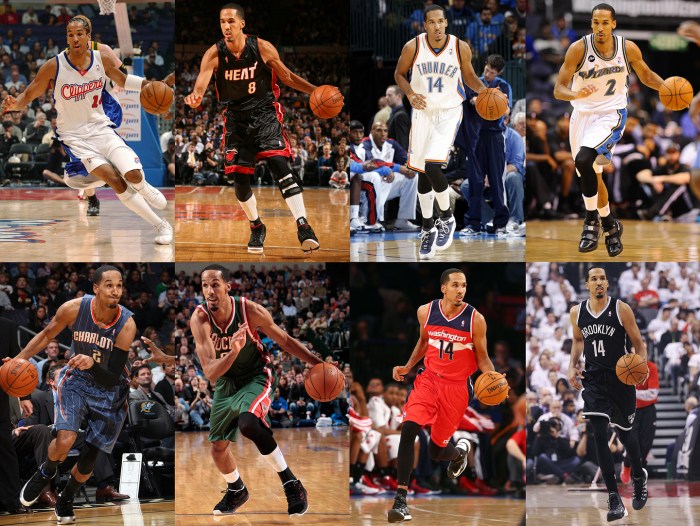 Nine years in to his NBA career, Livingston seemed finally healthy and able to reach his potential with the Brooklyn Nets during the 2013-14 season. He averaged 8.3 points and 3.2 assists off the bench while playing a then career-high 76 games. His coach, Jason Kidd, thought enough of him to start Livingston 10 of the 12 games the Nets played in their two rounds of postseason ball.

It was around this time that Livingston also started realizing his comeback could be motivating to others.

“As I was starting to come back into the NBA, made a comeback and did better, I felt my purpose was to inspire people to get through hard times and struggle,” Livingston said. “I felt like that was a higher calling and bigger purpose, rather than who I was supposed to be as a player.”

The Warriors were actually interested in signing Livingston before he signed with the Nets. And to fill a big backup point guard role behind now two-time Most Valuable Player Stephen Curry, Golden State inked Livingston to a three-year, $16.3 million contract on July 11, 2014.

Livingston didn’t disappoint, averaging 6.3 points and 3.3 assists in 76 regular-season games for Golden State during the 2014-15 championship season. He played a major reserve role — appearing for an average of about 18 minutes in each of the Warriors’ 21 postseason games — as the Dubs went on to win their first championship since 1975. Myers says Livingston “appreciated the championship” more than any other Warriors player.

“He had an authentic kind of gratification that resonated within him that he showed me when I’d speak to him,” Myers said. “He would say, ‘What’s up champ?’ Often times in this business you move so fast that you don’t take time to really appreciate what he accomplished. He’s seen the valley and he’s seen the top of the mountain.”

Said Livingston: “I won the championship, not just made it to the playoffs. There were times I just wanted to make the playoffs. Now we won. It was crazy.”

Livingston played in a career-high 78 contests this regular season behind Curry. The Warriors are still cautious enough about his past injuries that they don’t allow him to play more than 30 minutes a game. He continues to do “preventative” maintenance and strength work on his quads, calves and glutes in his usual rehab.

“With my rehab now I’m well versed with how the body reacts and having symptoms,” Livingston said. “I try to stay ahead of the curve.”

Livingston: “As I was starting to come back into the NBA, made a comeback and did better, I felt my purpose was to inspire people to get through hard times and struggle.”

Livingston is in the process of writing a book about his life story and believes more people like Singh can be motivated by his road to recovery after, he hopes, a second championship.

“I want people to use my story to stand up, be strong-willed and persevere,” he says. When the chips are down, I want you to understand the type of person I am.”

“The days for me after the surgery were the darkest times for me both emotionally and psychologically,” Singh told The Undefeated. “Ironically, the Warriors were in the first round of the playoffs and I know this is going to sound cheesy, but every time I saw Shaun play it reminded me that my world wasn’t ending, this was going to be temporary and I’d be OK.”