Athletes’ protest at Wisconsin-Minnesota football game was a missed opportunity

Seventy rows above the gridiron of Camp Randall Stadium on the last Saturday of the Big Ten regular season, I watched Wisconsin take the field against Minnesota with two sets of eyes. One anxiously awaited the game, an intense rivalry that pitted the Badgers of my alma mater against the Gophers of my academic home this semester as a visiting professor. The other part of my vision, though, was looking for an act of principled protest that several student-athletes had alerted me to expect.

The game proved as fierce as anticipated. An underdog who hadn’t beaten its next-door foe in a dozen years, Minnesota gashed Wisconsin’s vaunted defense on the way to a 17-7 halftime lead. One brutal hit along the sideline knocked out the Badgers’ starting quarterback for the rest of the game. Wisconsin punched back in the second half, pancaking Minnesota’s quarterback on sacks and harrying him into four interceptions. When it was over in the November darkness, UW had won 31-17, and its players gleefully carried the Paul Bunyan ax, symbol of the annual showdown.

As for the political side of things, nothing had happened during the pregame warm-ups. While the national anthem was sung, both teams were kept off the field, according to a Big Ten policy that conveniently undermines any Colin Kaepernick-style dissidence. With the final whistle, Minnesota’s players vacated the field in defeat and Wisconsin’s band took over for its traditional “5th Quarter” show. In other words: bread and circuses as usual.

Only three days after the game did I learn that the protest had, in fact, occurred. But it went off in front of 77,000 empty seats, something like an hour and a half before kickoff. Several dozen of the African-American student-athletes on each team had gathered then at midfield to offer clenched-fist salutes – an homage not only to recent athletic activists such as Kaepernick and LeBron James, but very specifically to the Olympic sprinters Tommie Smith and John Carlos, who famously made the same gesture on the medal stand in Mexico City nearly a half-century ago.

As heartened as I was to belatedly learn that the players had made their statement, I felt even more acutely a sense of missed opportunity. What they had done in a silent, unpopulated stadium was precisely what the fans who would later fill all those seats – the overwhelming majority of them, not coincidentally, white fans – most needed to see and to respect and, yes, to honor.

The national conversation about activism by African-American athletes, which itself is part of the larger Black Lives Matter movement, has focused primarily on the participants, on their experiences and motivations. That is only half the discussion that should be taking place. The other part of the sporting equation involves the fan, particularly the white fan.

The racial context of high-level sports, especially basketball and football, which have a disproportionate share of black players, operates on the basis of a morally corrupt bargain. The white fan offers the black athlete a provisional exemption from the normally negative connotations of blackness in return for two things: elite performance during the game and acquiescence to inequality and bigotry the rest of the time.

Admittedly, this deal is not true of every single white fan; I could never presume to speak for millions. The Black Lives Matter movement has demonstrably engaged college-age whites, white Baby Boomers who grew up in the civil rights era, and faith leaders from primarily white denominations. We know, too, that white millennials formed an essential part of Obama coalitions in 2008 and 2012. The NBA coaches Steve Kerr, Stan Van Gundy, and Gregg Popovich have been outspoken progressive voices on racial issues.

Still, the bargain that I described speaks to a broad and unfortunate historical truth, and to a tortured kind of personal chemistry on the racial dividing line. Spike Lee brilliantly captured the compact in a scene from Do The Right Thing between his character, the delivery man for a pizzeria in a black neighborhood, and a son of the shop’s Italian-American owner.

MOOKIE: Pino, all you talk about is nigger this and nigger that, and all your favorite people are so-called niggers. 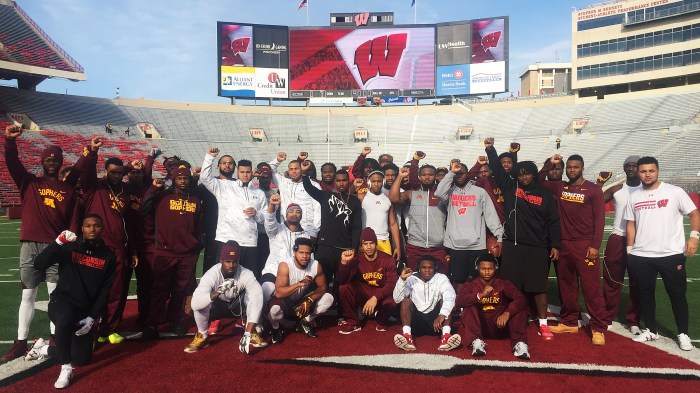 At its worst, the white fan believes he has the right to simultaneously cheer the black athlete while despising black people. During a Wisconsin home game the weekend before Halloween, a fan showed up in a “costume” of President Barack Obama in prison stripes with a lynch mob’s noose around his neck. I fully recognize that this kind of overt racism is uncommon in the liberal college town of Madison, which is justifiably proud of its tradition of student activism. Indeed, complaints from other fans led the stadium staff to order the offending spectator to remove the noose (though he was permitted to keep on the prison garb and Obama mask).

But neither are such outbursts unknown. In 1988, one of the fraternities there held a “slave auction.” And yet the fervent and vastly white fan base for the Badgers roots for a football team, many of whose stars in the past generation have been black: Al Toon, Terrell Fletcher, Ron Dayne, John Clay, Montee Ball, Melvin Gordon.

So when Kaepernick takes a knee during the The Star-Spangled Banner, when James wears an “I Can’t Breathe” sweatshirt during warm-ups, when the then-St Louis Rams wide receivers emerge from the stadium tunnel in the “hands up, don’t shoot” pose, they are violating the terms of the white fan’s contract. They are saying that Trayvon Martin, Eric Garner, Freddie Gray – and, for the Wisconsin and Minnesota student-athletes, certainly Philandro Castile, shot to death beside his girlfriend and her child on a suburban street near the Minnesota state fairgrounds – died in ways they, too, could die.

But the willfully ignorant white fan, or the consciously hypocritical one, refuses to understand that there is no such thing as an exemption from blackness. Decades ago, Cornel West made this point in the introduction to Race Matters, when he described how a series of cab drivers refused to pick him up and drive him to Harlem for a photo shoot for the book’s cover – even though West was attired in his standard three-piece suit. Such was the lesson of Henry Louis Gates Jr.’s arrest for trying to enter his own house near the Harvard campus. Such was the lesson of South Carolina Sen. Tim Scott’s description of being profiled and pulled over by police even while on his way to Congress. If being a conservative Republican doesn’t give you a free pass from blackness, then being a football or basketball star certainly doesn’t, either.

At best, the white fan begrudgingly tolerates the political engagement of the black athlete. More commonly, though, the white fan treats it as ingratitude, arrogance, defiance, all those variations on the theme of uppity. In my own decades as a fan, I’ve heard those attitudes expressed in the stands and in the bars and on the sports-radio call-ins. Admiration can turn into condemnation in a hot second. And not even condemnation is the exactly right word. What the white fan expresses is something more like the primal cry of the spurned lover.

I wonder what might have happened had Camp Randall Stadium been full of white fans when the Wisconsin and Minnesota student-athletes lifted their fists in righteous protest. The past year’s public activism by Wisconsin’s basketball stars – Nigel Hayes, Bronson Koenig, and Jordan Hill – have certainly served to wake a growing number of white fans. Or maybe a lot of white folks still would have groaned, cursed, or taken that moment to head for the restroom or the refreshment stand. And possibly, the white tolerance of or support for black athletic activism depends too much on how often a given team is winning.

In Donald Trump’s America, football suddenly feels like the redoubt of that supposedly forgotten and victimized white working class. Besides Wisconsin, Trump took unexpected victories in four other swing states that are part of the Big Ten: Iowa, Ohio, Michigan, and Pennsylvania. SEC country is as red as it gets. So it can be hard to hope for a large-scale awakening. If it happens, it will only be because the prodding by black athletes themselves persists. And maybe, whether in Madison or somewhere else, more of the white tribe will find the way to applaud a black accomplishment other than a smashing sack or a fourth-down conversion.

Samuel G. Freedman, a regular contributor to The Undefeated, is the author of nine books, including Breaking The Line, about Black college football and the Civil Rights Movement.