Bismack Biyombo on Congo’s Ebola outbreak: ‘One way or another … we all going to have to pay attention to Africa’

Not specifically about the 800-year-old church nearly burning to the ground but about how, in the hours after the cathedral’s spire burned down and firefighters controlled the flames, nearly $1 billion was pledged by private citizens to refurbish the church — a building.

Since May 2018, there have been nearly 2,800 confirmed cases of Ebola in the Congo. Of those confirmed cases, over 1,800 people (66 percent) have died. In mid-July, the World Health Organization (WHO) declared a global health emergency in the Congo, just the fifth-ever such declaration made by the international public health organization.

After the previous Ebola outbreak on the continent, which lasted from 2014 to 2016 in Western Africa, it took two years for the WHO to raise $459 million to fight the virus — half of the amount that was pledged within days to rebuild Notre Dame. (Granted, those French billionaires never actually donated the pledged money.)

“I mean if we can raise hundreds of millions for some other things to be built, I think we can do that to save life,” Biyombo said.

Ever since being selected seventh overall in the 2011 draft by the Sacramento Kings (his draft rights were immediately traded to the then-Charlotte Bobcats), Biyombo has traveled back home every offseason to visit family, run basketball camps and, most recently, help local governments attempt to eradicate the Ebola virus.

Although Biyombo hasn’t been directly affected by the virus (his family mostly lives in the southeastern area of the country, while the outbreak has been concentrated in the northeast), he considers the entire country, and continent, his family. “We’re all related in some way,” Biyombo said.

After a recent trip to the Congo, Biyombo spoke over the phone with The Undefeated about his work in the African nation, the citizens’ distrust of the local government and what needs to happen to help eradicate the virus from the area once and for all. 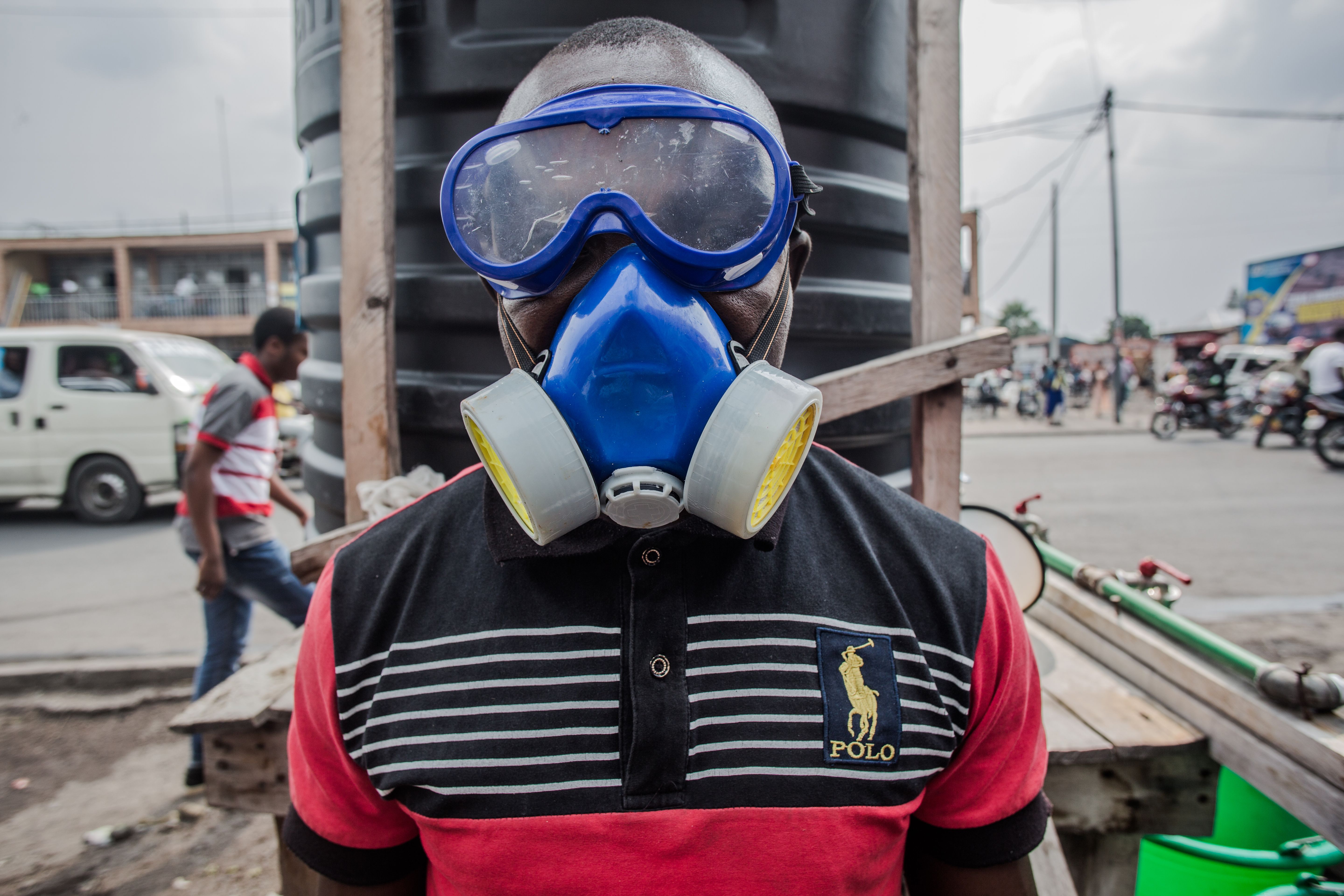 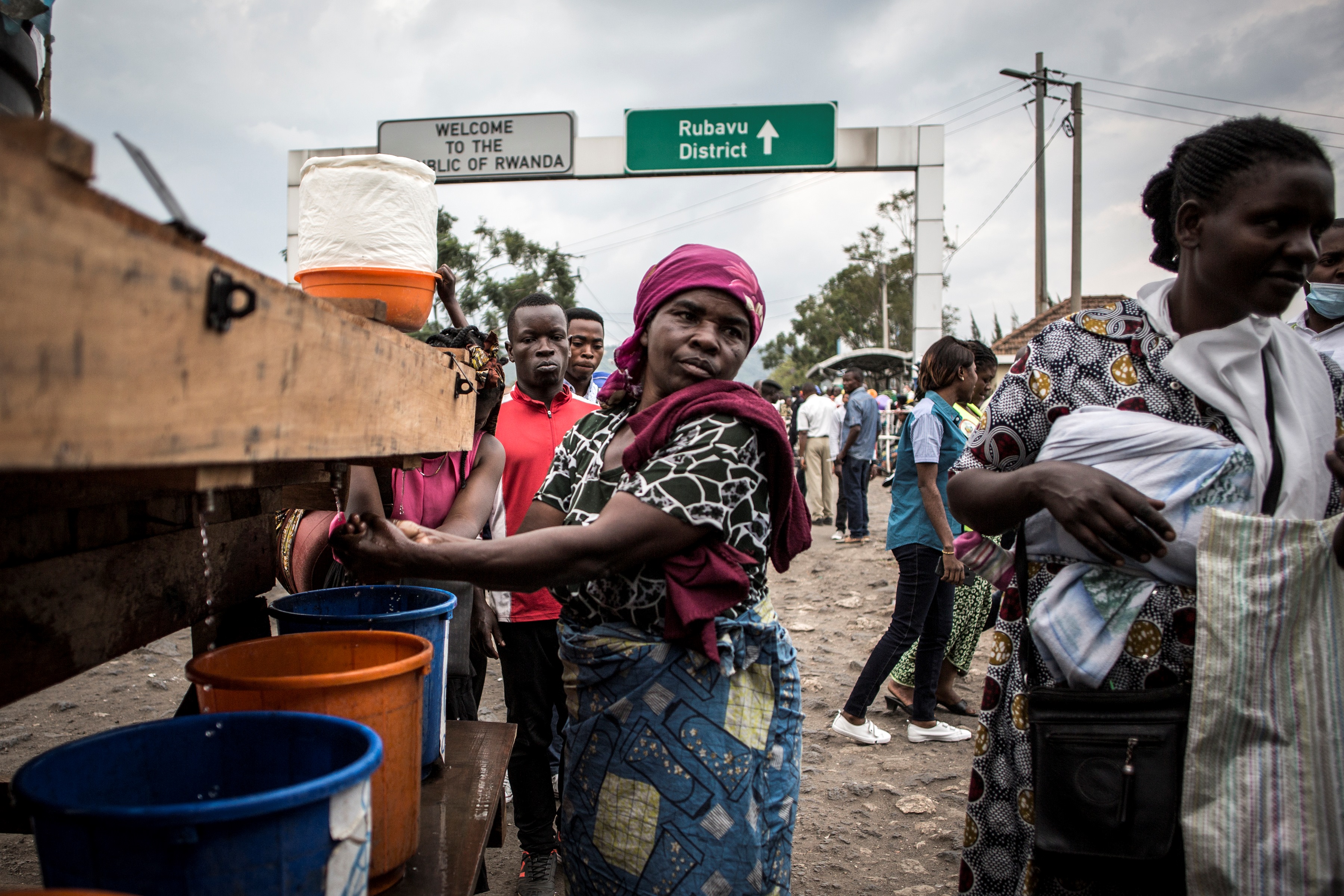 A women washes her hands at an Ebola screening station as she enters the Democratic Republic of Congo from Rwanda on July 16 in Goma. (John Wessels/AFP/Getty Images) 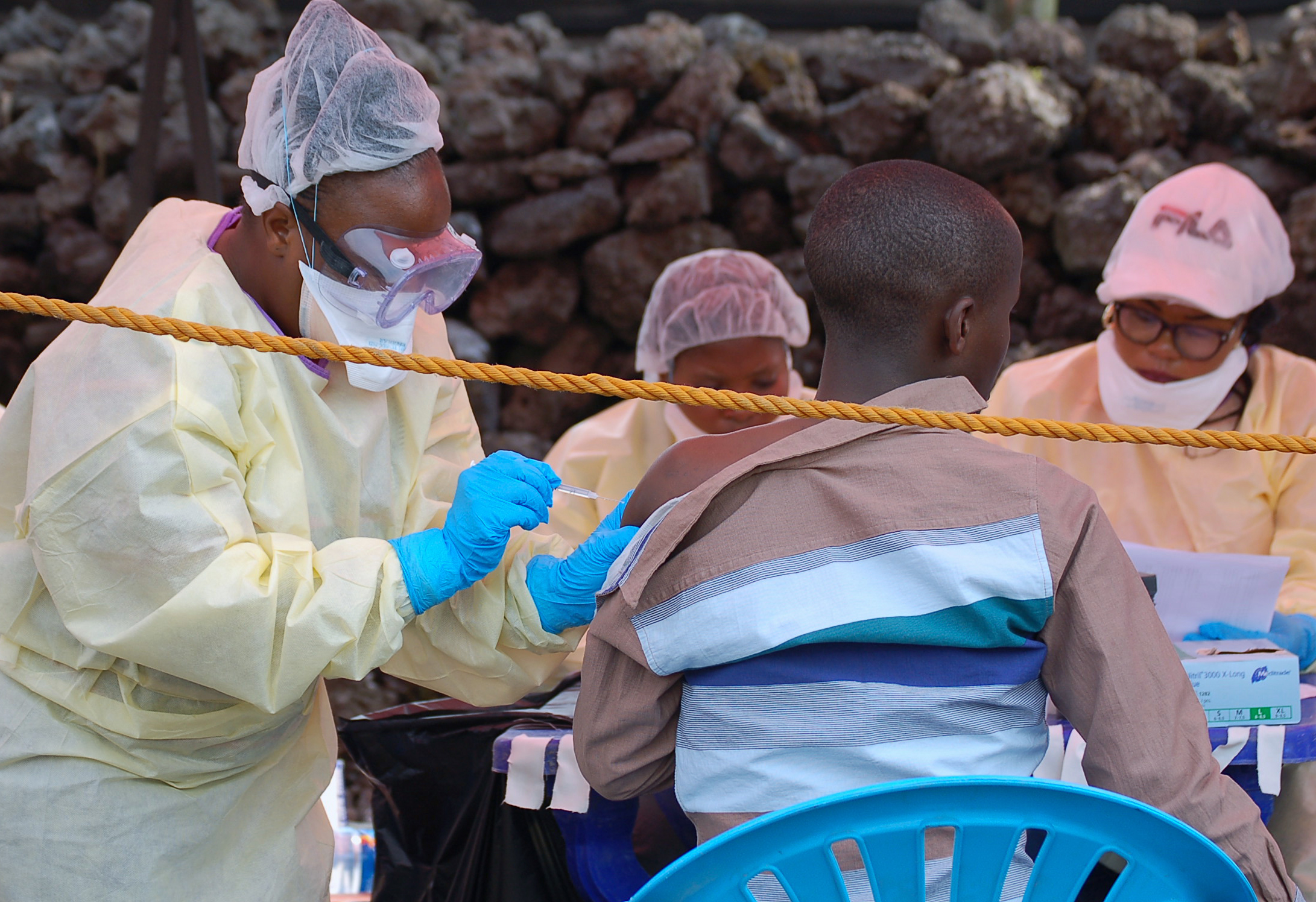 A young man receives a vaccine against Ebola from a nurse in Goma on Aug. 7. (Augustin Wamenya/AFP/Getty Images)

For those who aren’t paying as close attention, what’s the latest news on containing the Ebola virus?

The latest update is that the government, from what I’ve heard when I was in the country, that it was under control, but obviously they have to wait for the 21 days to know exactly if that’s the case because it takes about 8 to 21 days for the outbreak to come off. So, from the government side, they say it’s contained, but I think we all kinda have to wait for the 21 days to pass and kind of have a better idea of what are we dealing with.

I also think that it’s something that’s there, and people should talk more about it, because in the region also there’s a lot of mining parts in it, which means it’s a lot of business that I’m not sure if they put on hold or not, but it could be tricky.

I know you’ve worked with MATTER in the past. When you went home recently, were you working with an organization specifically engaging with the Ebola epidemic?

The only thing that I’m kind of involved in is within the local government. And the main reason is to get the message across, like people need to take care of themselves. People gotta wash their hands, make sure all these little things are being taken care of. Your house, are you cleaning your house? The airport, now, they put in places where people have to wash their hands and all these things, just make sure we can prevent it. In different places, they now take your body temperature in some hotels … to see if your fever is not too high, if you’re normal.

And so a lot of people are more aware of how they can protect the problems, and who are the problem, and that’s how we can help that person. I think it became more so of a problem that we’re all dealing with within the country and internally because we have not been able to be exposed out to the wards.

You kind of have to understand the population’s trust issues with the government because of the history that we’ve had with the country in the past. Also, this is a new government that’s in place. It’s a lot of stories out there, but it’s a new government. The trust issue has been there for years because we, in some way, I won’t say betrayed people, but we have not done what was necessary in order to position our people in a better place. So I’m hoping for the new government, the open-minded; it’s a big, younger generation. I think the trust can be built over the time.

It’s gonna take some time, hopefully before the end of the year. But overall, for what we have done in the past will bring us to these specific points. Some people within the population feel that it [Ebola] was a bluff, and some people take it very serious. And by bluff means because of the region being attracted to so many things, and the region being almost the No. 1 war zone region in the country, also because of its natural resources. Some people believe it’s a bluff because they don’t want people to go there and they don’t want people to visit that region so they can take advantage of the resources in the region. That’s what certain people believe, but the reality is, yes, Ebola actually exists.

How many family members do you have left in the Congo?

A lot, a lot. My parents don’t want to leave Congo. It’s kind of understandable because they’ve lived there most of their life. But my brothers and sisters — I have two brothers and three sisters — they all live in the U.S., going to different schools getting an education. Most of my family’s still back home.

I like going home to do charity work, while also a good opportunity to see all those family members. So, part of it, you got to make sure you help everybody because this is an issue about faith in the country, not just me being concerned about my own family members. I could get them out of there as much as I can. The reality is, what about those ones I can’t pay to get out of the country or those that can’t afford? And that’s why we’re channeling our energy now into health and building good programs, school programs, and seeing how we can have something great within the country where people don’t have to feel motivated to leave the country.

With us being in America and this being an American site, what can Americans do to help with a problem that’s, you know, thousands of miles away?

I think the No. 1 thing is, yes, Congo has this issue, but our No. 1 problem is resources. Congo is limited in resources. What I mean by that is not that we don’t have the resources — we do have the resources — but we have not managed out properly in the past few years. Hopefully we’ll get to do it with this new government and in the future, but the resources is the problem. The research. I think I spoke to Bill Gates one time a couple months ago when he tweeted about Ebola, and he was impressed on the research of the vaccine. I think at this point for us as Congolese, always asking people in a position like myself is that those who have all this research clinics or whatnot, if a vaccine can eventually be provided, not just to cure Ebola but to prevent it, it will be helpful. I met with a doctor who actually told me that there were vaccines but after one year the vaccine was not effective no more and it was a whole lot of explanations after that. But Ebola is real.

You talked about resources, which you say “research” and stuff like that, but a lot of this comes with money, and kind of a perfect example to compare to just happened in Paris with the burning of the Notre Dame Cathedral and how hundreds of millions of dollars just poured in within hours of it burning, and then you see with Ebola …

If I tell the truth, I sat down and think about that over and over, because the cathedral burned down [and] within hours there were solutions. What stopped people from actually investing the solution to discuss this [Ebola] because people are dying. Like, this is real. People are dying. I think Africa is overlooked with these problems because people sometimes say, ‘That’s African problems. That does not concern us.’ One way or another one, at some point we all going to have to pay attention to Africa because the reality is this: If one person get on that plane and come to the U.S. and spray, then it becomes the U.S. problem. So why wait until that happens instead of fixing this problem now?

You know, most of the time people talk about the negativity, the darkness of Congo. Yes, there is darkness, but I think at some point it’d be good to actually talk about the resources that Congo has, because the realities, if you want to bring out the lights to all the resources that Congo has, it’s a lot of people involved in it. It’s a lot of people involved, and people are making billions of dollars, which is understandable, but when you make those billions of dollars, make sure you look back to those people working for you for the country. Like people within the country show benefits from the resources, but the reality is that they do not benefit. They did not benefit. Part of it is ourselves.

Do you believe the Ebola problem in Congo can be solved in the next five or 10 years?

It’s tough, but me, I’m only the believer looking at things on the bright side. Do I think that we’ll get to the point where there’ll be a solution? I’d probably say more than thinking is having hope. Having hope because the last thing I would ever want is for somebody I know to die from this. Yet, there’s those family already suffering from this. For me, I was sitting with somebody three days ago and we’re talking about like having the drone going and dropping this certain medicine to certain villages if you cannot get there by car, and we had a long conversation about it.

But I also think from one side is that, you know, we all have to have hope, and from the other side is being realistic. For the past decade or more than a decade, our problem has been there, yet still coming back and don’t solve. What’s gonna change people’s mindsets for that problem to be solved within the next five to 10 years? Like what’s going to change people’s mind? Is it other countries end up having Ebola, which is something you don’t wish for? What’s going to get people’s attention?