‘My dad was everything to me’: Bismack Biyombo is still healing in his NBA return

Months after his father’s death, the veteran center has revived his career and is contributing to a title contender in Phoenix

SALT LAKE CITY — Bismack Biyombo was missing his usual pregame text message from his father while sitting on a courtside seat about 90 minutes before tipoff of a Phoenix Suns road game last month. François Biyombo used to text his son with an encouraging message before his NBA games, then watch or check the box score in the early morning from the Democratic Republic of the Congo.

“My dad was everything to me,” Biyombo told The Undefeated before the Suns’ 105-97 win over the Utah Jazz on Jan. 26. “My whole career, I always get a text message from my dad before the game. Sometimes it would be 3 a.m. over there, 4 a.m. in the Congo. And I’m like, ‘Dad, what are you doing up at this time?’ He was always checking on my game.”

François Biyombo was a husband and father of six children, including the 29-year-old Bismack. Biyombo said his dad contracted COVID-19 in July, and though he would recover, it created other health ailments that eventually claimed his life in August 2021 at age 61. (Biyombo declined to go into detail about his father’s health complications.)

The 11-year NBA veteran, who signed with the Suns in January after taking time to mourn his father, certainly lost the daily words of wisdom, text messages, encouragement and love he received from a father who taught him how to be a good man and give back to the less fortunate.

What is not gone with the death of François Biyombo is the “blueprint into life” that his son lives by.

“He set an amazing example that I would forever be grateful [for],” Biyombo said. “He was my mentor. He was my business partner. He was my friend. There were times when things were hard and I would pick up the phone and just call him. Sometimes I would just cry and he was OK with it. With him and my mom, I would just call and just be myself and I knew that they would guide me in the right direction.

“I’m grateful because he raised some amazing kids. My brothers and my sisters, we’re so close and we are best friends. We can hang around each other [with] no problem. And I’m just grateful that God gave me the opportunity to have one unique father that give me a blueprint into life. People say, ‘Oh, you’re a good person. You never change.’ It’s because of the parents I have, the mom and dad. I treat everybody, whether you rich or poor, the same.”

Bismack Biyombo Sumba was born in Lubumbashi, a copper mining city in the Democratic Republic of the Congo. He said his father worked as an engineer for a mining company and his mother worked part time for the government. There was a stretch when the Biyombos struggled financially, but they made it through.

“We went through our moments of poverty, eating once a day. One pair of shoes going to school. But then after that, things got better,” Biyombo said.

Biyombo was recruited to play basketball professionally in Qatar at age 16, but he said he couldn’t make it work because he lacked proper documentation. He was next discovered at a youth tournament in Yemen where he landed an opportunity to take part in basketball training in Spain.

After accepting a pro contract to play in Spain from 2009 to 2011, he landed a life-changing opportunity to play on the World Team in the 2011 Nike Hoop Summit. Biyombo impressed NBA scouts, recording the first triple-double in Hoop Summit history with 12 points, 11 rebounds and 10 blocks. The 6-foot-8 225-pounder was selected seventh overall in the 2011 NBA draft by the Sacramento Kings, and his rights were acquired by the then-Charlotte Bobcats.

While his son’s journey to the NBA was initially far-fetched, François Biyombo supported his basketball dream the best he could from the very start.

“This is how much I love my dad,” Biyombo said. “He spent his own money out of his pocket for me to chase my dreams. Look where I’m at now. There are some days where I sit back and think about if any parents would’ve done it. But it’s a commitment for a parent to just say, ‘I believe in your dream.’

“ ‘Although I don’t think you should go, you’re too young, but I trust you and I support you. But you have to promise me if you fail, you come back home and finish school.’ I said, ‘No problem, I promise you.’ But it was never a failure. Man, look where we are today.” 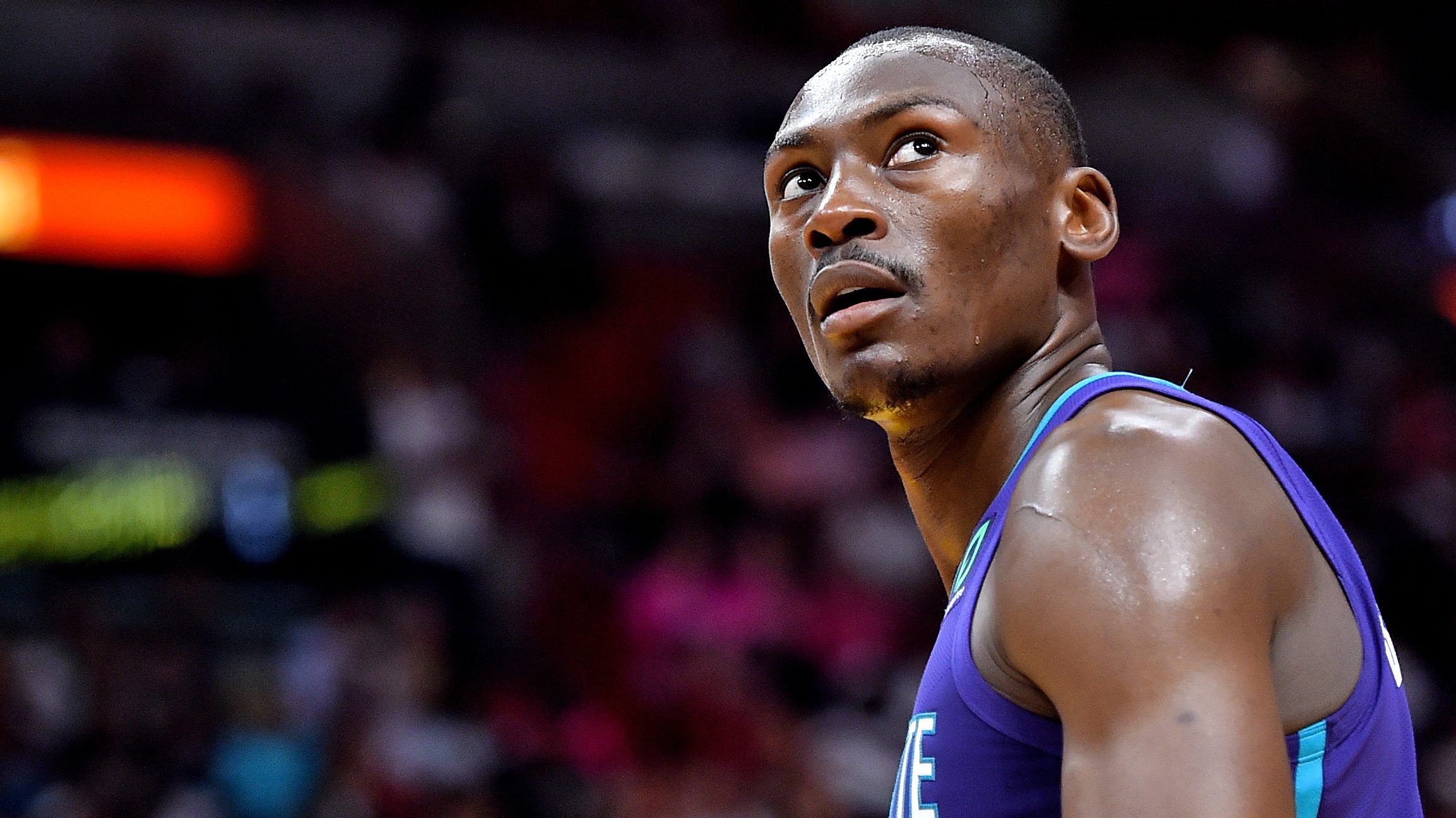 Bismack Biyombo on Congo’s Ebola outbreak: ‘One way or another … we all going to have to pay attention to Africa’Read now

Biyombo averaged 5.1 points and 6.1 rebounds across 10 seasons with the Bobcats/Hornets, Toronto Raptors and Orlando Magic. While Biyombo was proud to reach 10 NBA seasons, he was frustrated playing on teams that did not compete for championships.

Biyombo told his agent, former NBA star B.J. Armstrong, that he wanted to sign only with a title contender as a free agent.

“That was the hardest part,” Biyombo said. “I talked to my agent and I said, ‘Look, the only way I will do it is for a contender. Otherwise, I’m not doing it.’ ”

Biyombo says his dad was the “strongest man I knew,” was blessed with amazing health and never spent one day as a patient in a hospital. That changed after he entered the hospital in Congo in July 2021. That news alarmed Biyombo, who left his offseason home in Miami and headed to Africa to see his father after talking to him on the phone.

“All of sudden, I just had a gut feeling like, ‘You got to get on a plane and go home,’ ” Biyombo said.

Biyombo said he regularly sought the opinion of doctors in Michigan, Congo and Turkey, who also corresponded with each other, about his father’s health. He next moved his father to Istanbul to get top-notch medical help in a hospital there. Biyombo, his mother and one of his sisters went to Turkey to be by his father’s side.

Biyombo said he spent about three weeks in Istanbul while his father was in the hospital. He would do basketball and fitness workouts in the morning before spending time with his father by his bedside the rest of the day. Biyombo was strong for his family on the outside, but mentally he started preparing himself for the worst as the situation didn’t improve.

“I had a conversation with my mom, who was with me in Turkey, and I said, ‘Ma, you know I just want to go home to Miami for one day. I need to sleep in my bed. Then I’ll come back,’ ” Biyombo said. “Around that time, I felt like I needed to maybe prepare myself. By then, emotionally, I was just too overwhelmed. You have to take care of family. And you have to take your emotions out of it.”

Biyombo departed Istanbul for Miami on Aug. 12, 2021, in hopes of getting a couple of days of rest before returning to Turkey. The day after he returned, he was awakened by one of his brothers knocking on the door loudly at about 2 a.m. He took a quick glance at his cellphone and his heart jumped as he saw countless missed calls and text messages from doctors.

Biyombo next opened his door and saw one of his brothers sobbing because of the news that their father had died.

“My dad was gone. I looked at the phone, text messages from doctors and all that. He was gone,” Biyombo said.

Biyombo had his father’s body returned to Congo, where the family had a memorial service for him on Aug. 21, 2021. He announced in English and French on Instagram that his father was “called to heaven” and stated that he “was no longer suffering and he was in a better place now watching over us.” Biyombo still yearned to play basketball again, but he was not certain when. With his indecision, interested teams signed other free agent big men.

Biyombo stayed in shape by playing basketball, boxing, running on the beach and dragging weights tied to his body while pushing a pickup truck. He also spent time fasting to get his mind right. With the NBA season underway, Biyombo said on Instagram that he was almost ready on Oct. 21, 2021.

“It speaks to who he is. To endure something like that and be back on the court a few months later is really hard.”

“I wasn’t ready to play basketball. It would’ve been just a joke,” Biyombo said. “Emotionally, you’re kind of off in space. Even when I talked to head coach Monty he was like, ‘With this thing, you have to take the time to heal.’ ”

Biyombo and Williams got to know each other while working a Basketball Without Borders camp in Africa. Williams was a big fan of Biyombo as a person and a big man. Williams said he and Suns general manager James Jones had conversations about Biyombo during NBA free agency that began Aug. 2, 2021. The Suns initially tried to sign Biyombo in October, Williams said.

“Just being around him over there in Africa, I was like, ‘This is the type of guy I’d love to coach,’ ” Williams said of Biyombo.

With the condition of joining a contender, Biyombo told Armstrong he was mentally and physically ready to return to the NBA in December 2021. On New Year’s Day, Biyombo was officially back in the NBA, signing a 10-day hardship contract with the Suns amid players being in health and safety protocols.

“My dad’s biggest thing was whatever the struggle is, you have to fast and pray,” Biyombo said. “That’s the way we were raised. So, I fasted and prayed about it.”

The Suns entered 2022 with the NBA’s best record at 27-8, but two of their centers, Deandre Ayton and JaVale McGee, were placed in health and safety protocols, and another, Frank Kaminsky, was out with a knee injury. Biyombo made an immediate impact on the Suns, averaging 11.1 points, 8.1 rebounds and 1.2 blocks in 22.8 minutes in January.

“He plays hard. He’s active. He defends. He sets screens and rolls … I’m going to have a quick chemistry with anyone who sets screens for me,” Suns All-Star guard Chris Paul said.

Williams said Biyombo shared the story of his father’s death during a road trip to Indianapolis in January while they were both riding exercise bikes. Williams said he also learned about the love Biyombo had for his family and how he aided them.

“It speaks to who he is,” Williams said. “To endure something like that and be back on the court a few months later is really hard.”

After three impressive games, the Suns signed Biyombo for the rest of the season on Jan. 11. His role has diminished in February with Ayton and McGee back in uniform.

Biyombo, however, is ecstatic to be on a winning team with true championship aspirations. And if the proud son of François Biyombo can win his first NBA title with Phoenix, expect there to be tears of joy this time.

“I’m so grateful to God that God put me in the position to heal and put me in the situation that I prayed for, and I’m extremely grateful and thankful for it,” Biyombo said.